The Hidden Library of Tzeentch - part 6

Ulastur Curseflame, Iridescent Horror. Leader of a troupe of Pink Horrors (that are being painted now).

More WIP: Elyrah Spewfire, another Iridescent Horror (a second Silver Tower Pink Horror with one of the alternate Herald heads from the Burning Chariot kit).

Posted by WarbossKurgan (Saul) at 09:09 No comments:

Objective: Hold the Centre (1 Laurel of Victory each Battle Round for side with largest unit within 3" of central scenery, 3 Laurels if General is within 3").

El Doctoro turned the dirt-covered metallic item over in his hands and squinted at it. He brushed some more of the dust off it and said “Hmmmmm”.

The other Rotmoons gathered around him had presented a small pile of found objects from their last expedition for his assessment. Most had been discarded as junk but three had made the cut for closer examination. The three members of the crew that found those particular objects tried to hide smug grins.

“Dis one may be one the eight fragments of the Agony Portal… or it might be a bit of one of them duardin flying machines. Hard to tell, I’ll have to look it up.”

“Such a perfect day for a fight.” said Alunzo da Leeva as he looked at the flawlessly clear blue sky, high above the weather-worn ruins of Phos. “I do hope we have one.”

“Oh, I think there is a good chance, my dear Kapitán.” said El Doctoro “Look here…” the Shaman pointed down the long, ruined street with his skull-topped ebony staff: a small group of large Ogors approached.

Both forces ran towards the central obelisk. The Tyrant led the way and the Ogres got there first but the Orruks swamped them. The Orruk Privateers injured the Tyrant but he cut down a half-dozen of them in retaliation. The Halfling Master Chef fired on the orruks from the heights of the ruins but the shots ricocheted off Da Leeva’s armour.

The Tyrant and the Ogors curb-stomped the Rotmoon Boyz then turned on Kapitán Da Leeva. When he went down the Ogor, Grots and El Doctoro the Shaman conceded the battlefield to the Ironforged.

Laurels: 1 to Rotmoons, 7 to Ironforged
Posted by WarbossKurgan (Saul) at 10:24 No comments:

The Rotmoons and the Lost Tablet of Phos Campaign

The Rotmoons may call themselves Privateers, and act more like Pirates, but they spend more of their time acting like explorers than either. They search the ruins of the Realms for treasures and artefacts from the Age of Myth. Their Shaman, El Doctoro, considers himself an expert on that long-forgotten era and often pronounces, with great complacency and authority, what a found treasure was or its magical powers. He is occasionally correct but only occasionally.

Kapitán Alunzo da Leeva - Orruk Warboss
A dashing and heroic Orc Pirate; young, capable and unusually quick witted. He started his career on the Almagorka Coast and both he and his crew have acquired many strange local habits and mannerisms. He wears looted black clothes and black & gold enamelled armour, with a “white” ruff collar, a pair of heavy pistols, and a long coat draped over his shoulders as a cloak. He is popular with his crew as he has got them out of many scrapes over the years but unpopular with the other captains of the Ironfang Fleet who see him as an “upstart young pup”. He is unfortunately prone to shipwreck much more often than his actual skill as a commander should be.

El Doctoro - Orruk Great Shaman
Surgeon, explorer, secret agent, collector, scientist: El Doctoro is none of these but he occasionally drops hints that there is more to him than just “the shaman”. He wants the crew of the Rotmoon to think he is mysterious and complex.

Dragante - Orruk Boss
A hulking brute of an orruk who makes sure the Boyz do exactly what they are told and bashes heads together when the crews’ arguments (inevitably) turn into fights.

Hammerhead (AKA Tiburón Martillo) - Ogor Maneater
Dressed  in the Rotmoons style Hammerhead wears a black cloak and breaches, an off-white ruff, a battered morion helmet engraved with an octopus design and silvered armour. He carries a handgun that he uses as a pistol and he likes to twirl his huge cutlass in great swishing arcs.

Trollumbus - Fellwater Troggoth
Loaded with nautical detritus but not burdened with intelligence.

Posted by WarbossKurgan (Saul) at 10:16 No comments:

The Hidden Library of Tzeentch - part 5

Khu'ganax, Herald of Tzeentch and the Librarian of the Hidden Library leader of The Unbound, his small company of chittering and capering daemons, who will be sent out into the Mortal Realms in search of magical books for the Hidden Library and enacting the whims of their master, The Gaunt Summoner of the Silver Tower.

I'm hoping to make a feature across the warband of every open book having different details on its pages.

The Crystal Labyrinth of Tzeentch


Tzeentch's home in the Realm of Chaos is the Labyrinth of Tzeentch. This Labyrinth is woven from the raw fabric of magic, threaded upon deceit and conspiracy. Of all the landscapes of the Realm of Chaos, this domain is by far the most bizarre and incomprehensible. The Labyrinths presence is felt across all of the Daemonic realms. Interchanging, shifting avenues made of pure crystals of every colour crisscross Tzeentch's realm. Hidden pathways built from lies and schemes lead out from the Labyrinth and infiltrate the dominions of other gods, binding together the fractious Realms of Chaos.

The Labyrinth itself has no Daemonic defenders. Its own illusory passages are enough of a barrier to any intruder not possessed of the strongest mind imaginable. Its glittering corridors reflect not only light but also hope, misery, dreams and nightmares. The labyrinth does not merely reflect but also distorts, pulling apart hope and purpose turning them into insanity and despair. Driven by Tzeentch's unconscious schemes, the labyrinth constantly moves and rearranges. Those lost within the Labyrinth's reaches will wander for eternity with their minds shattered, their dreams broken upon the wheel of their own failed ambition.

At the centre of the Labyrinth, hidden from those who have not the insane insight to find it, stands the Impossible Fortress. The architecture of the bastion is constantly replaced by new and ever more maddening spires, gates and walls. Doors and other entrance points yawn open like starving mouths, before clamping for eternity moments later, barring all access. Within the Fortress time and space does not exist at all and gravity shifts and changes, or disappears all together. Lights of every colour, some even unknown in the real universe, springs from the shifting walls.

Posted by WarbossKurgan (Saul) at 08:52 No comments:

The Hidden Library of Tzeentch - part 4

Getting there but still WIP and still lots to do.
Posted by WarbossKurgan (Saul) at 09:57 2 comments:

The Hidden Library of Tzeentch - part 3

Very messy WIP! Lots of work still to do...

Posted by WarbossKurgan (Saul) at 10:43 No comments:

The Hidden Library of Tzeentch - part 2

The first of the bookish Horrors are ready for paint. I assembled them just before this project started properly but I have gone back to them and replaced a couple of hands with book & scroll holding ones from Skaven Plague Monks and added books to a few of their bases. There are five more to come.

A Silver Tower Pink Horror serves as Urlastur Curseflame - the Iridescence Horror. I have a second that I am converting with leftover Herald parts.

Posted by WarbossKurgan (Saul) at 08:34 No comments: 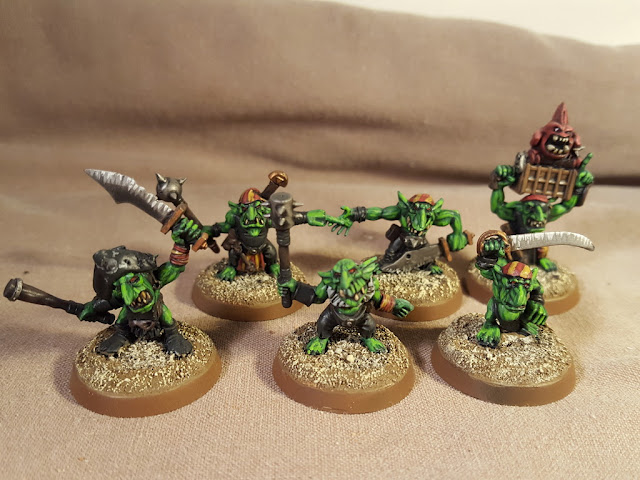 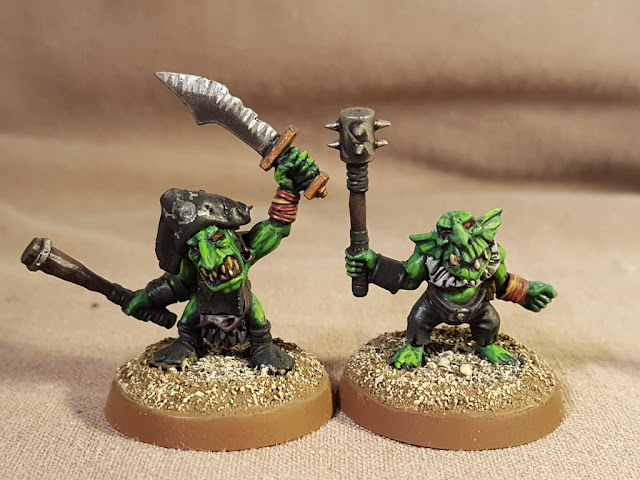 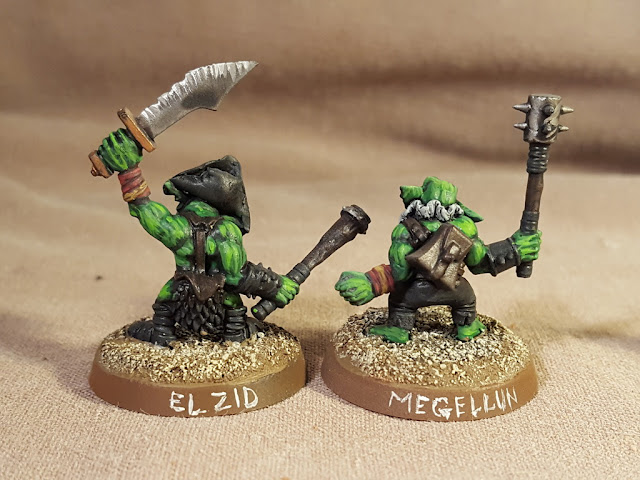 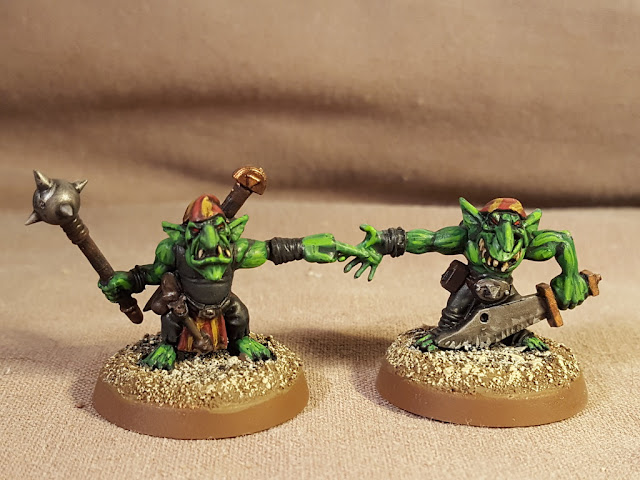 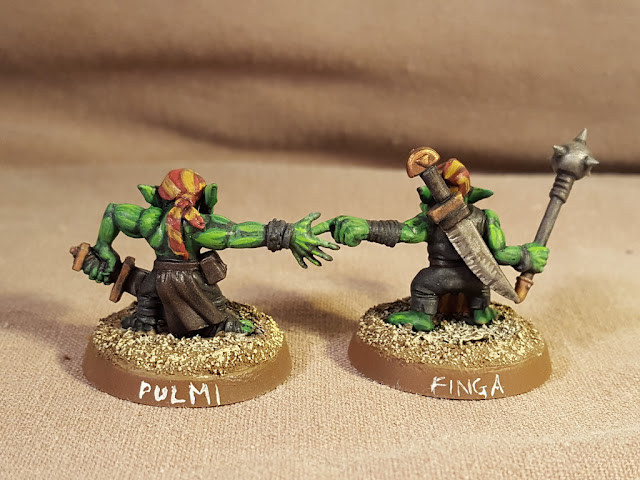 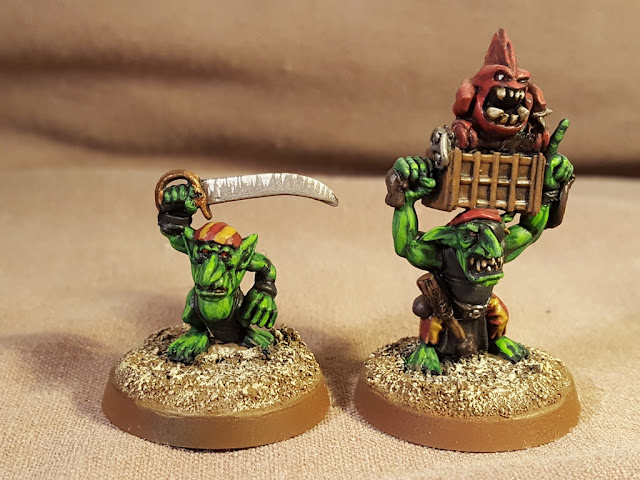 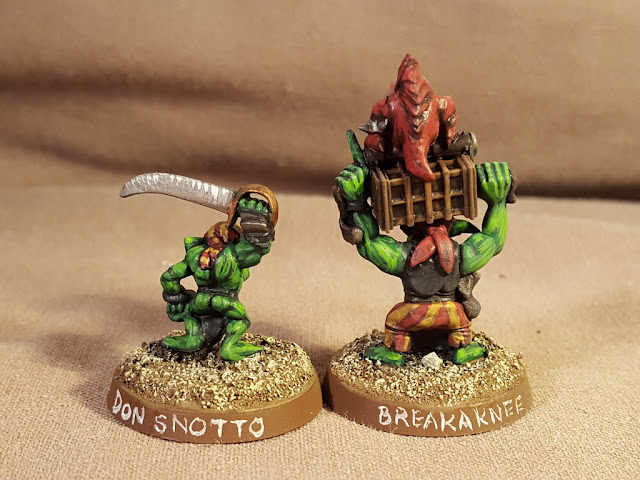 The Rotmoons may call themselves Privateers, and act more like Pirates, but they spend more of their time acting like explorers than either! They search the ruins of the Realms for treasures and artefacts from the Age of Myth. Their Shaman, El Doctoro, considers himself an expert on that long-forgotten era and often pronounces, with great complacency and authority, what a found treasure was or its magical powers. He is occasionally correct but only occasionally. These grots spend the majority of their time running round after El Doctoro, fetching and carrying his collections.
Posted by WarbossKurgan (Saul) at 08:26 No comments:

The Hidden Library of Tzeentch - part 1

The Hidden Library of Tzeentch contains every single scrap of knowledge, every thought of every creature across space and time, and is where Tzeentch himself concocts his eternal plots. It lies at the centre of the Impossible Fortress, within the Maze of Tzeentch. Flanking the doorway are The Towers of Helixis.


Trapped within the library are countless Pink and Blue Horrors who tend to the books as a mad gardener might tend to a sprawling mess of weeds and thorns. The grimoires chatter to their keepers, trapping the Horrors in webs of deceit and scandal so that the Daemons eventually fade away and the Library absorbs their energy.

Khu'ganax and the Unbound: Agents of the Hidden Library


After building most of a box of Pink Horrors last week I picked up a Burning Chariot kit on the way home last night. So project #HiddenLibrary has begun and agents of the Silver Tower will soon venture out into the Mortal Realms. Well, as soon as they are painted...

I'm going to get 10 or 11 models out of Burning Chariot kit: Herald, 3 Blue Horrors, Flamer, 2 Screamers, 3 or 4 Book Familiars. I'll also have left over parts for themed scenery or objective markers too.

I've built a Herald of Tzeentch and some floating book familiars from the kit already. The Herald is called "Khu'ganax the Librarian". The warband will be called The Unbound.

I have two Silver Tower Pink Horrors that I will use as Iridescence Horrors (Pink Horror Champions), I plan on converting one a bit so they aren't identical. I also have one each of the Silver Tower Familiars.

I don't have plans to buy much more for the warband - maybe a few Silver Tower Blue Horrors and another box of Pink Horrors. It's more so I can explore some Tzeentch fluff with maybe a bit of gaming thrown in.
Posted by WarbossKurgan (Saul) at 13:27 No comments: 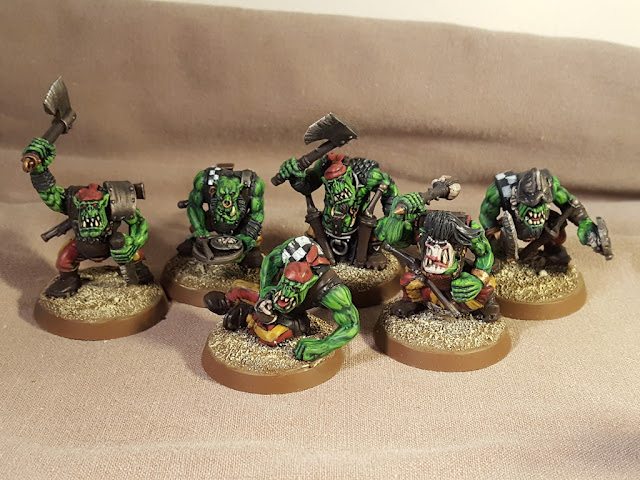 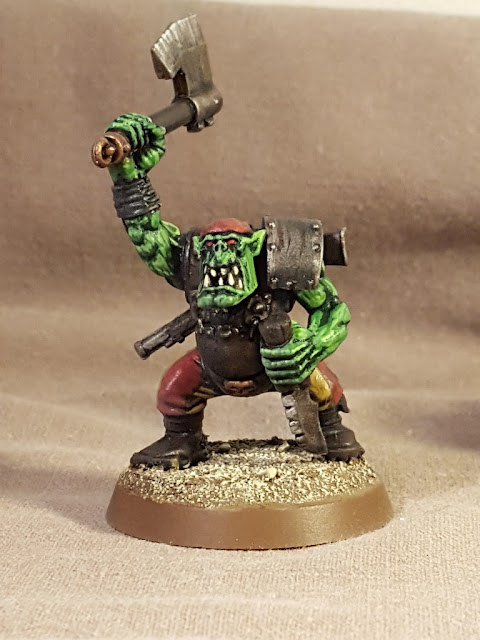 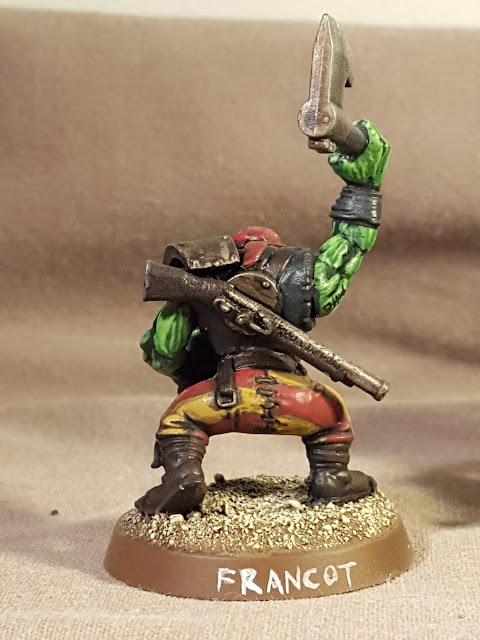 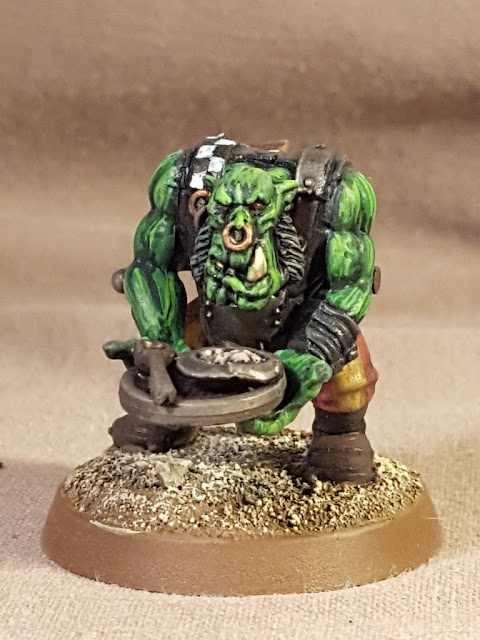 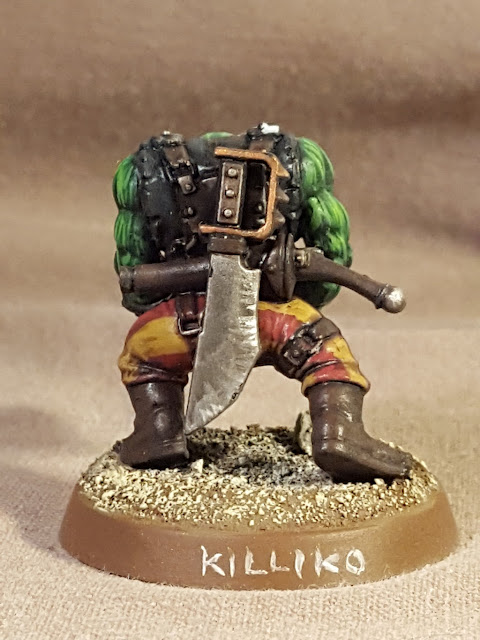 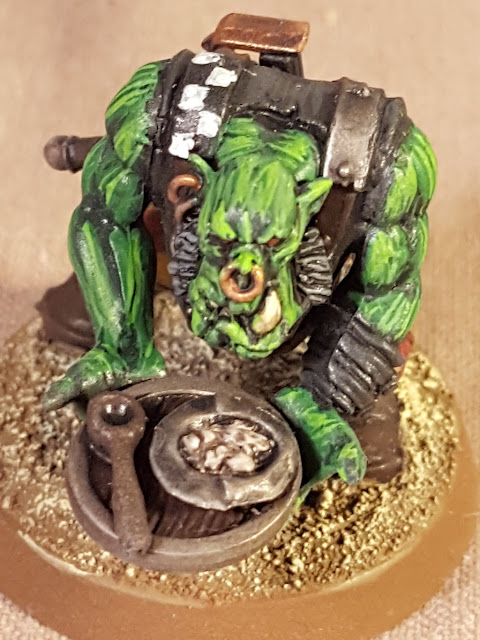 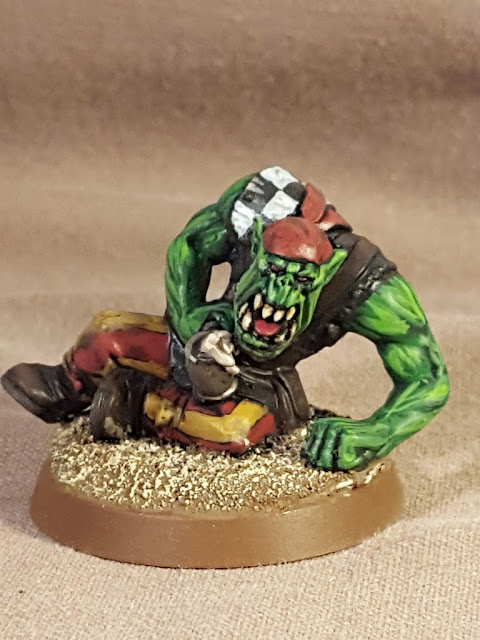 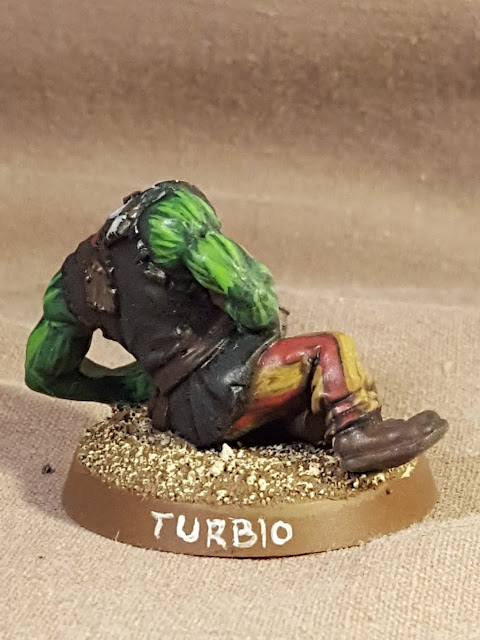 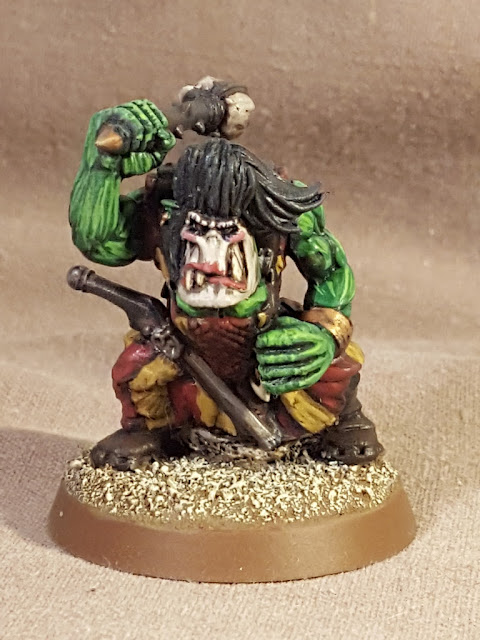 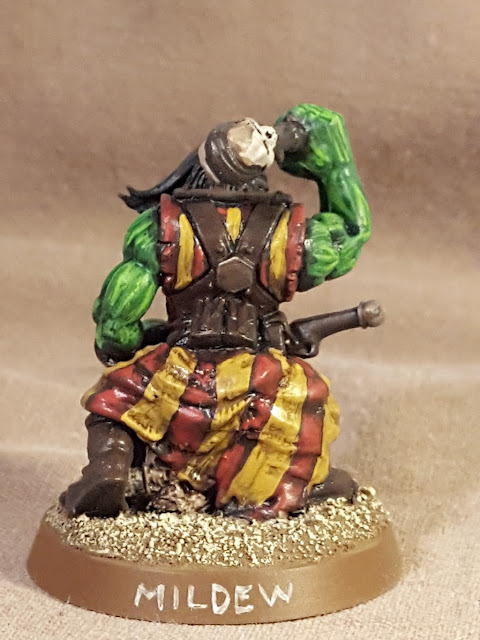 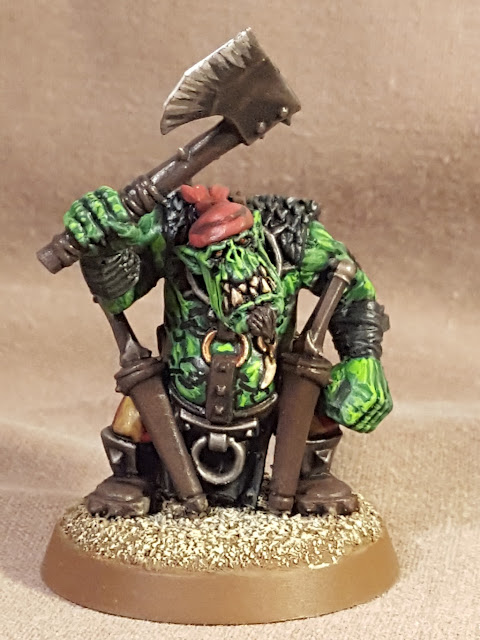 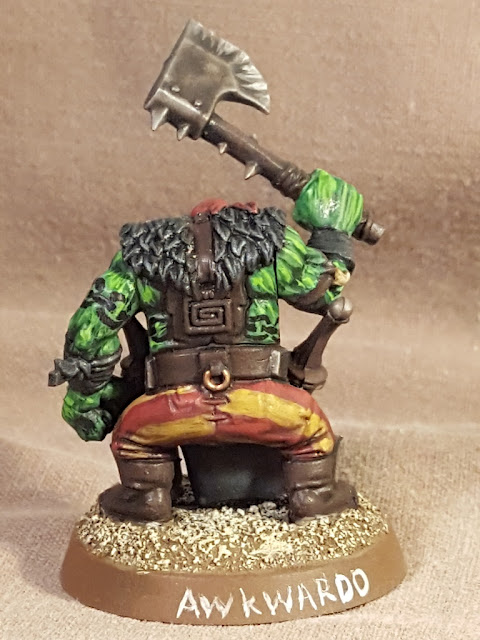 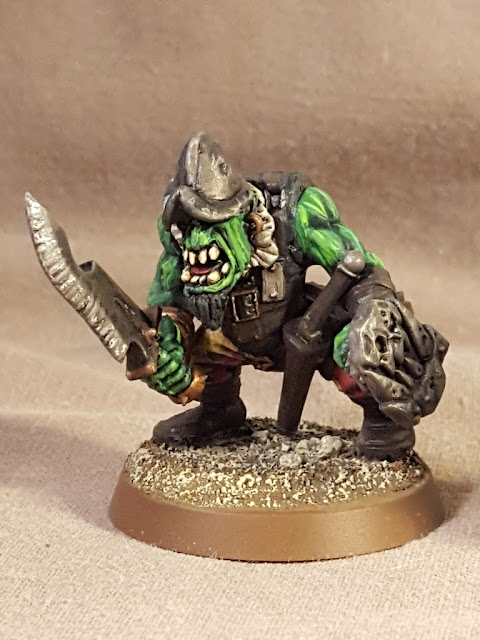 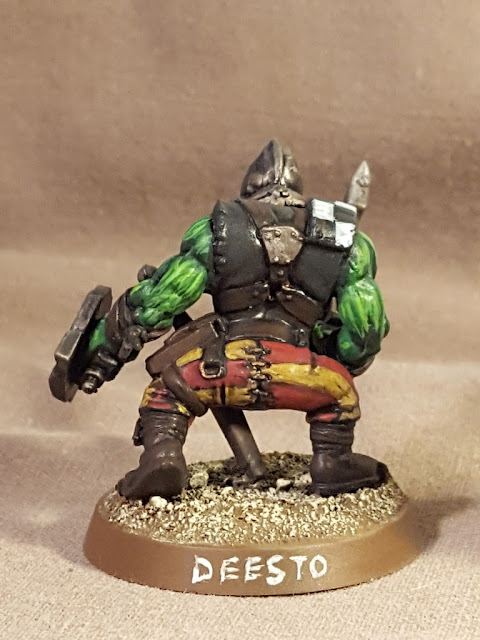 The warband so far (just 5 more Orruks and 6 Grots still to re-base): 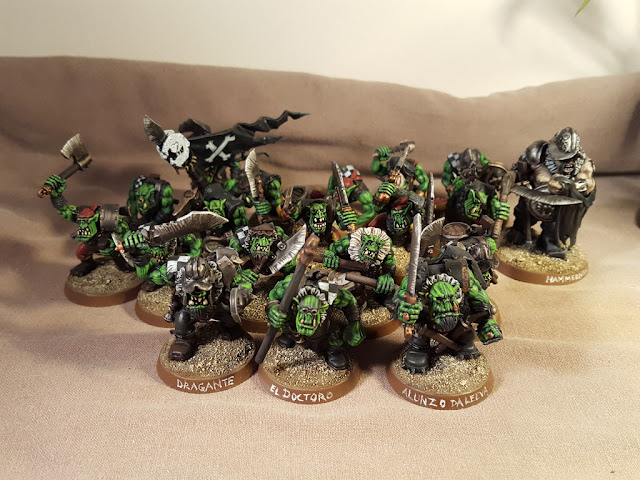 Posted by WarbossKurgan (Saul) at 10:11 No comments: