The Mortal Realms - Shyish: The Realm of Death

The Mortal Realms span reality, each impossibly vast and made of the concentrated essence of magic. From this springs untold vistas of the incredible and unbelievable.

The Mortal Realms are formed from the concentrated essence of magic unbound.Each is a universe unto itself, incalculably vast and more fantastical than any mortalcould bear to imagine. Each seethes with - and is formed from – those sorcerous energies that the learned men of the world-that-was once knew as the Winds of Magic.

Bizarre and twisted landscapes abound in each of the realms, from the highest snowcapped peaks to the lowest depths of the stygian underworld. In the Osseun Steppes of Shyish, scrimshawed orchards and vast plains of sculpted bone spread to horizons burning with spectral fire. Moons of inscribed silver hang above luminescent marshlands crawling with Spiderfang tribes while spiraling stone towers the size of mountains loom from oceans of roiling shadow. No two realms are alike, and within each one the myriad landscapes are diverse beyond description.

Ethereal winds swept across Shyish as crypts burst open, grave mounds were toppled and the Legions of Death rose anew. When Nagash emerged from the Starless Gate his intent was clear, to purge Shyish of the Chaos infection once and for all. From the depths of the Seven Abyssal Pits to the Skull Islands, from the Helstone Monments to the Desert of Bones, no lands of the dead were beyond the Amethyst Lord's rule. Casting an invocation of such titanic proportion that a tomb-chill was felt across all the Mortal Realms, all the unquiet spirits and restless dead of the Amethyst Realm were called upon. And they answered. Entire armies of the dead, each millions strong, rose up and assaulted the Chaos hordes from all sides. The dead marched to war once again. Though Chaos held sway over the land, the monuments of the dead felled and the cities of the living burnt and broken, they had underestimated the necromantic might of Nagash. Though the Dark Gods had blessed many of those that dwelt now in Shyish, they were simply outnumbered by an uncountable margin; a single Chaos Champion might butcher a hundred foes before being dragged down into a flurry of rusted knives. Yet even these dark heroics were wasted for the hundred slain would simply rise again, with the now fallen champion marching alongside them. Nagash and his Mortarchs led the way, winning the Slaughter at the Starless Gates and, with the unexpected aid of the Stormcast Eternals, retaking the Arch of Bones and casting the Bloodthirster Khar'zak'ghul back to the Brass Citadel.


Warhammer: The Age of Sigmar. The Realmgate Wars

The Harrowmark in Shyish, has long been considered a cursed and backward region, it has gained an ill reputation for being both a refuge for sorcerers and necromancers, and where the dead do not rest long in their graves.

The scattered villages and hamlets of the Harrowmark are isolated and parochial. Grubbing what existence they can from the infertile land, the peasants live in small communities of inter-related families, and never venture far from their crude hovels.There are few stone roads here; rutted, half-flooded tracks and paths link most villages, all but impossible to navigate. At times, the mud itself seems to be a living thing, clawing at the legs of the weak and dragging them to a suffocating death. The populace are for the most part concerned with day-to-day survival, raising famished, skinny goats and pigs, tending to what scraps of farmland they have in the hope of gathering enough crops to survive the long and cruel winter.

The villages are in a constant state of disrepair and have barred or boarded windows and heavy doors to keep out the night's predators. Crude fetishes and charms of a dozen gods hang on every lintel and frame. The villagers daub symbols of protection on their doors with pig's blood, to guard against the unnatural horrors of this frightful land. Hanging outside the gates of the most desperate townships can be found criminals and travellers caged in iron maidens, their only companions the crows and vampire bats that feed on them

Wortbad is just such a village, in the middle of the Harrowmark, it is deeply troubled by the undead and corrupted by dark magic. It is surrounded by haunted forests and overlooked by the jagged, foreboding Everdark Peaks. It is a land of perpetual autumn, where farmland lies fallow and untended, with crops rotted in the fields. 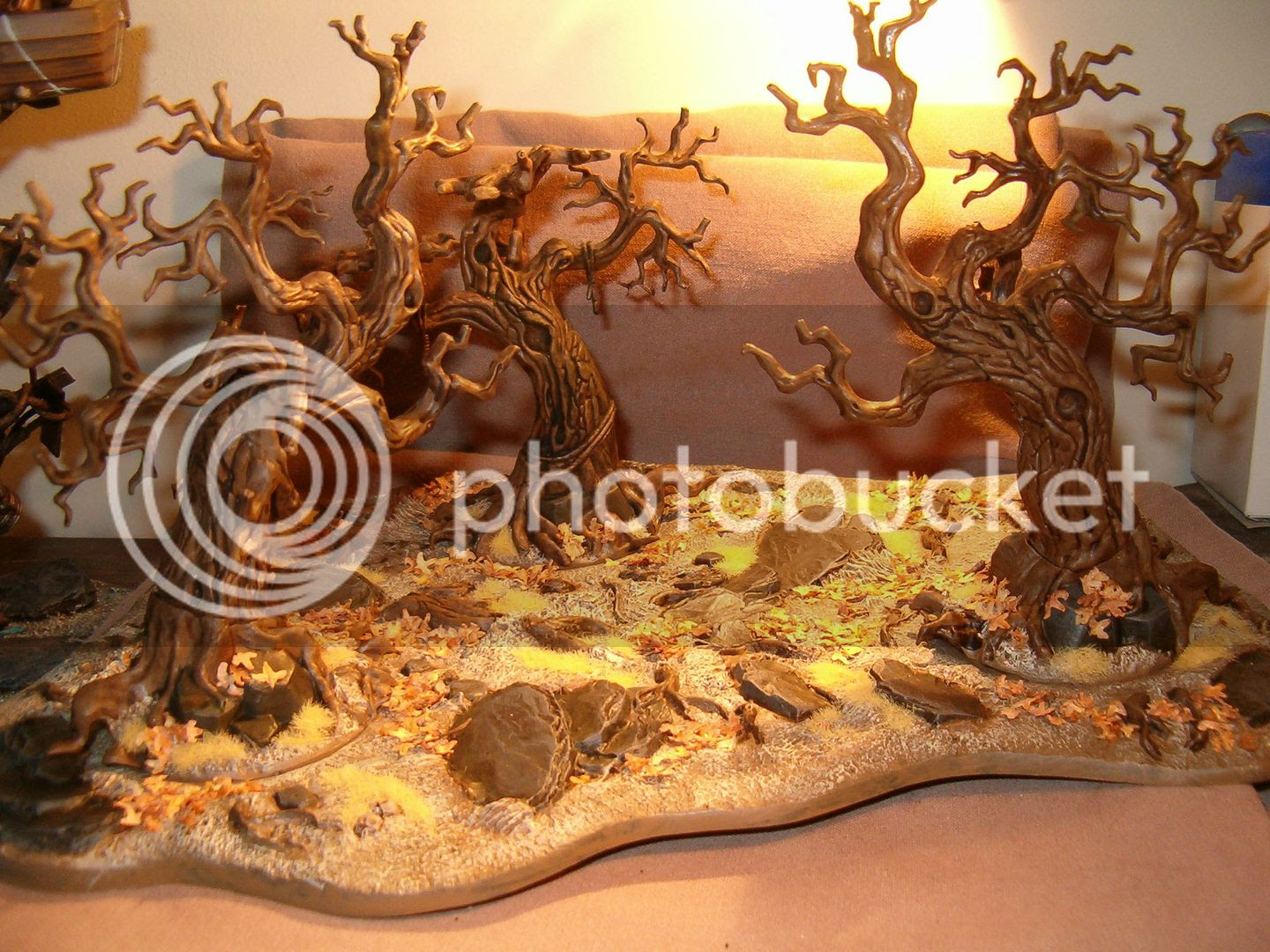 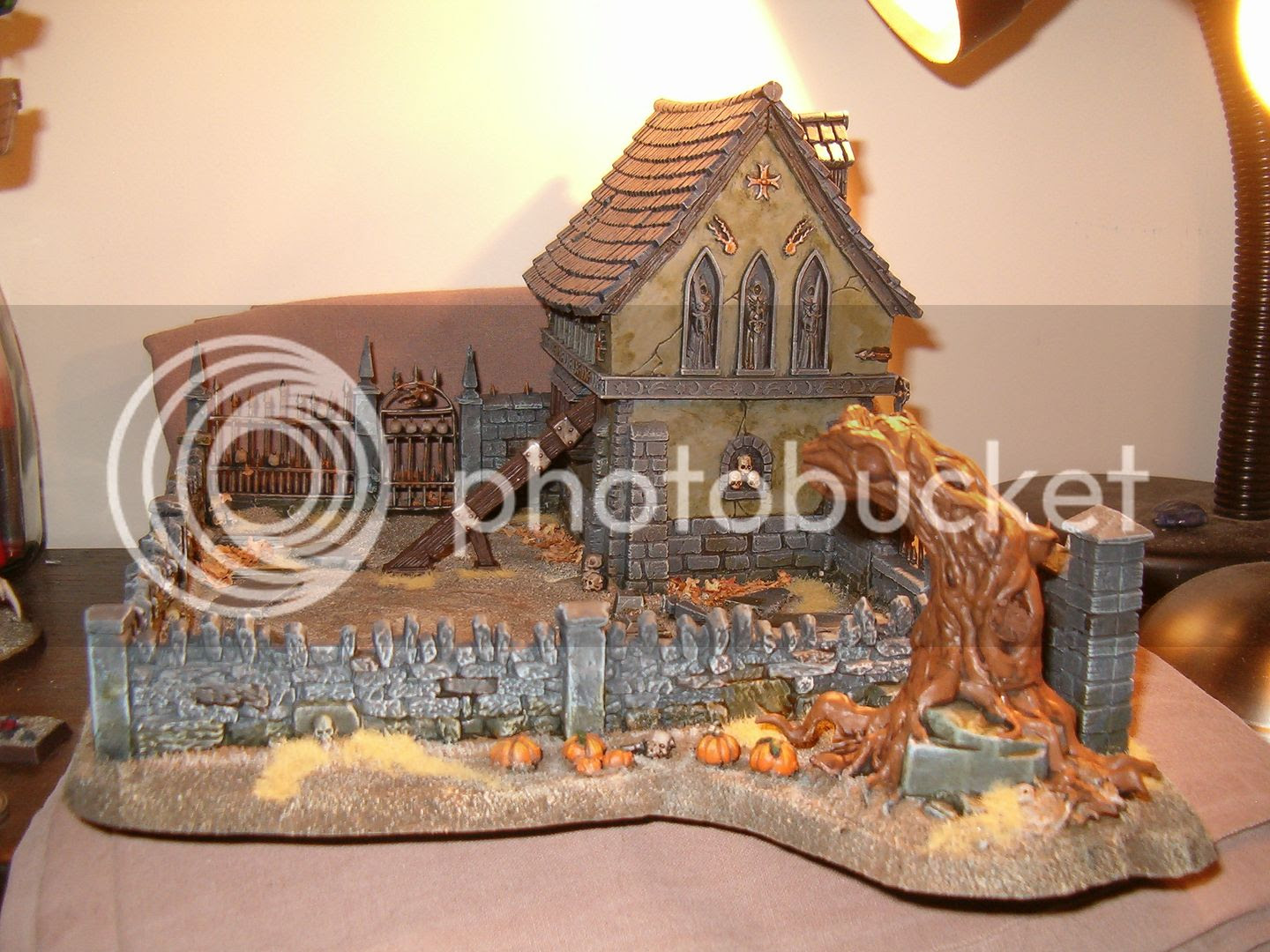 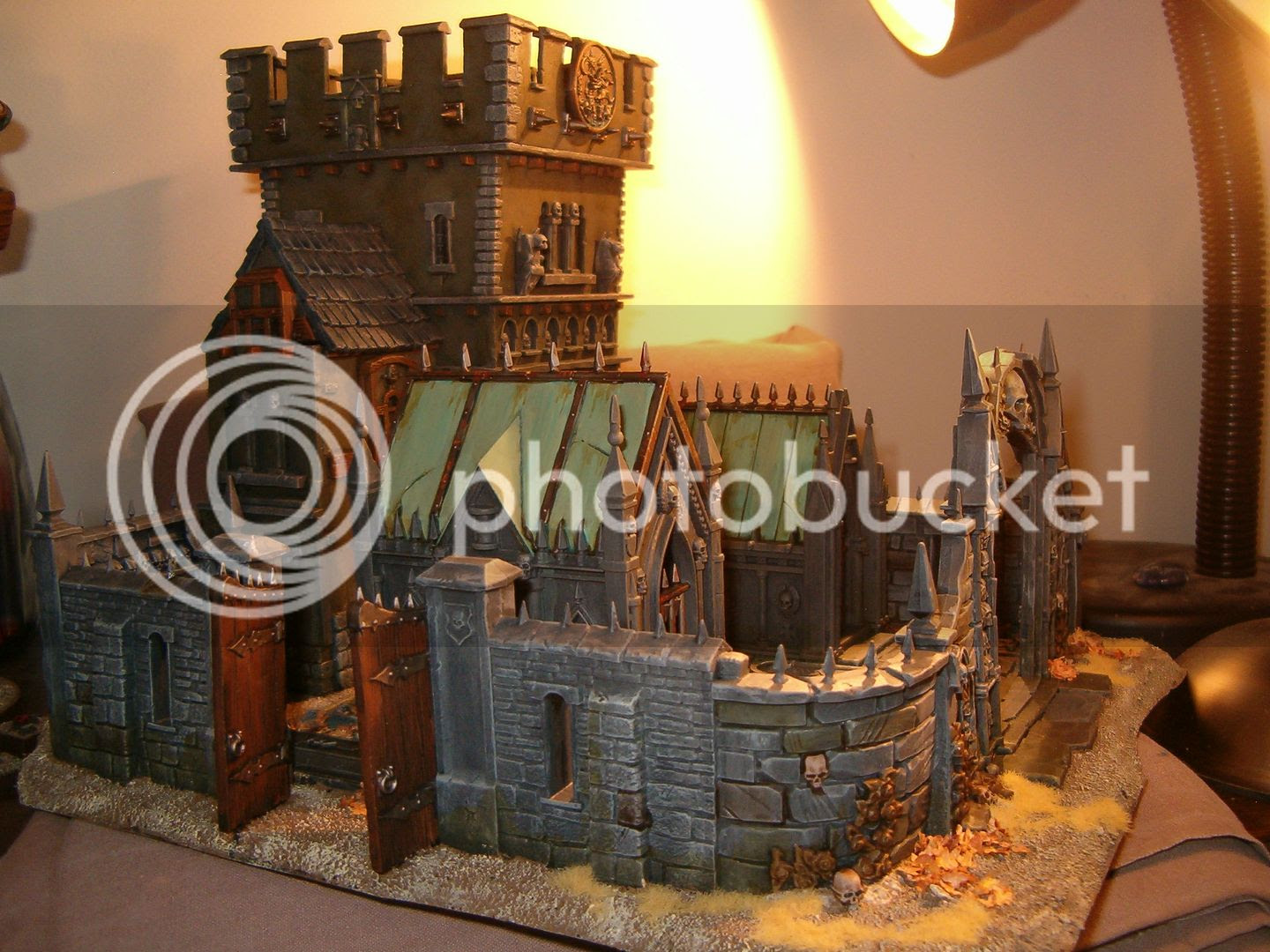 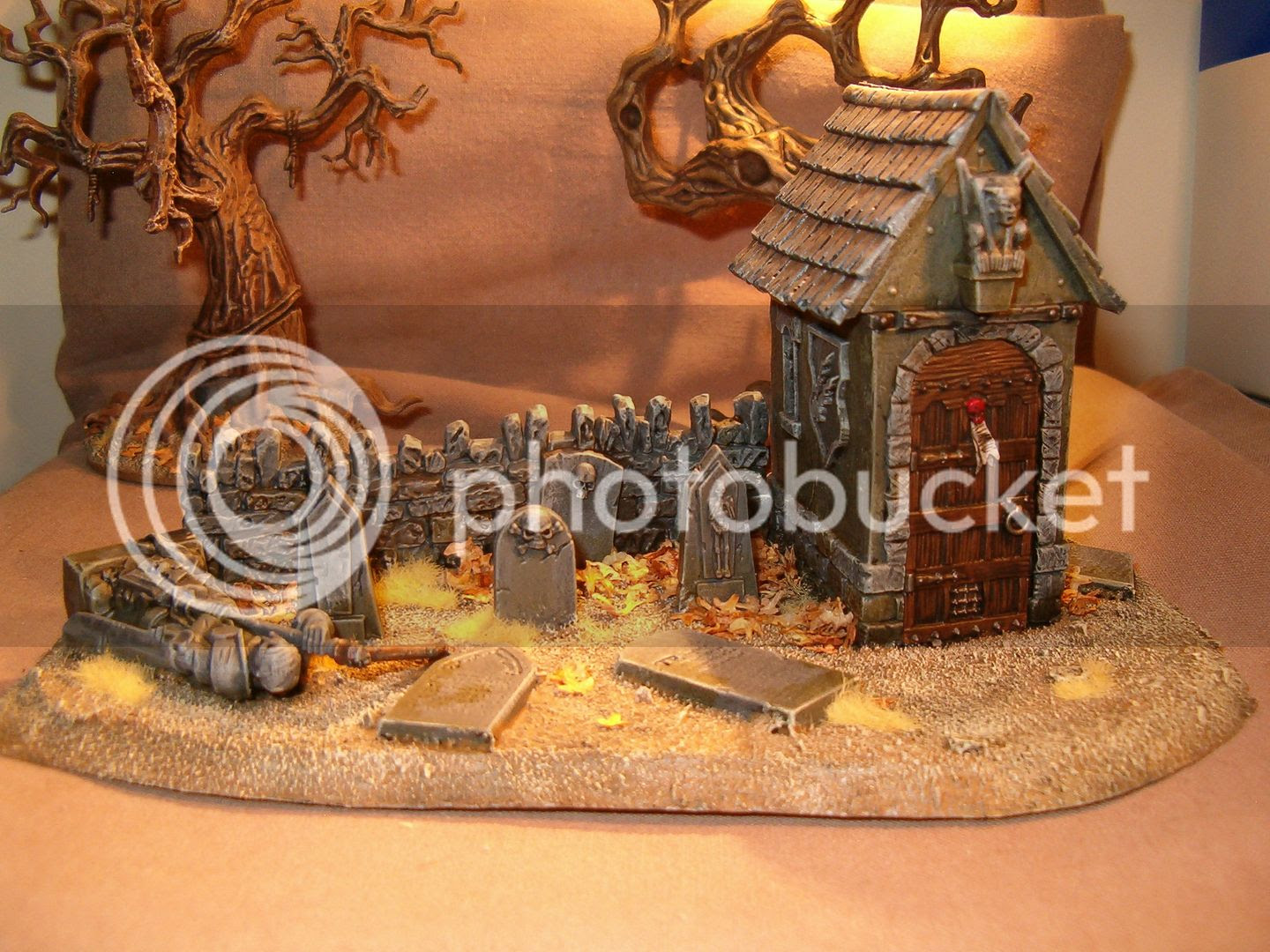 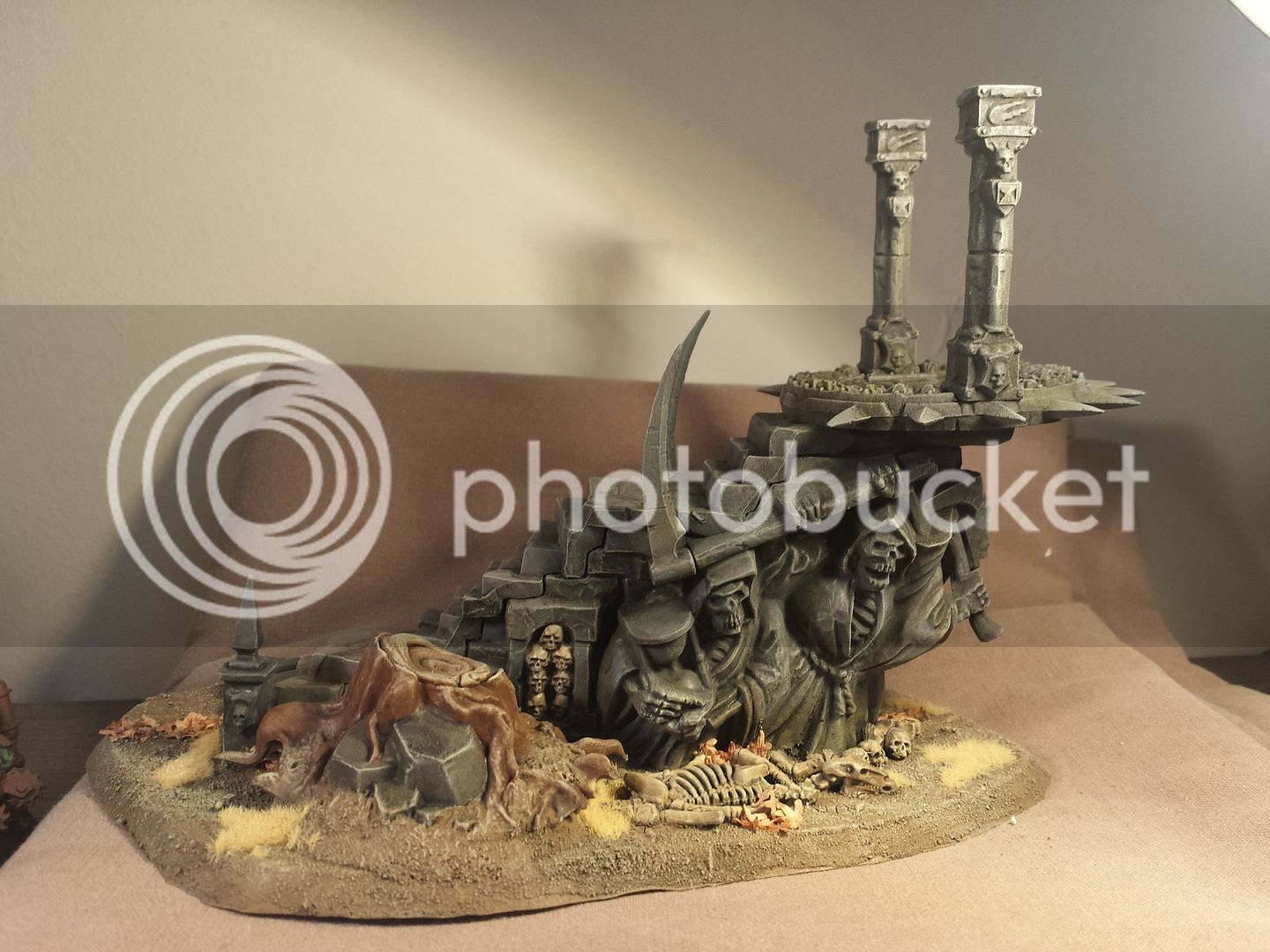 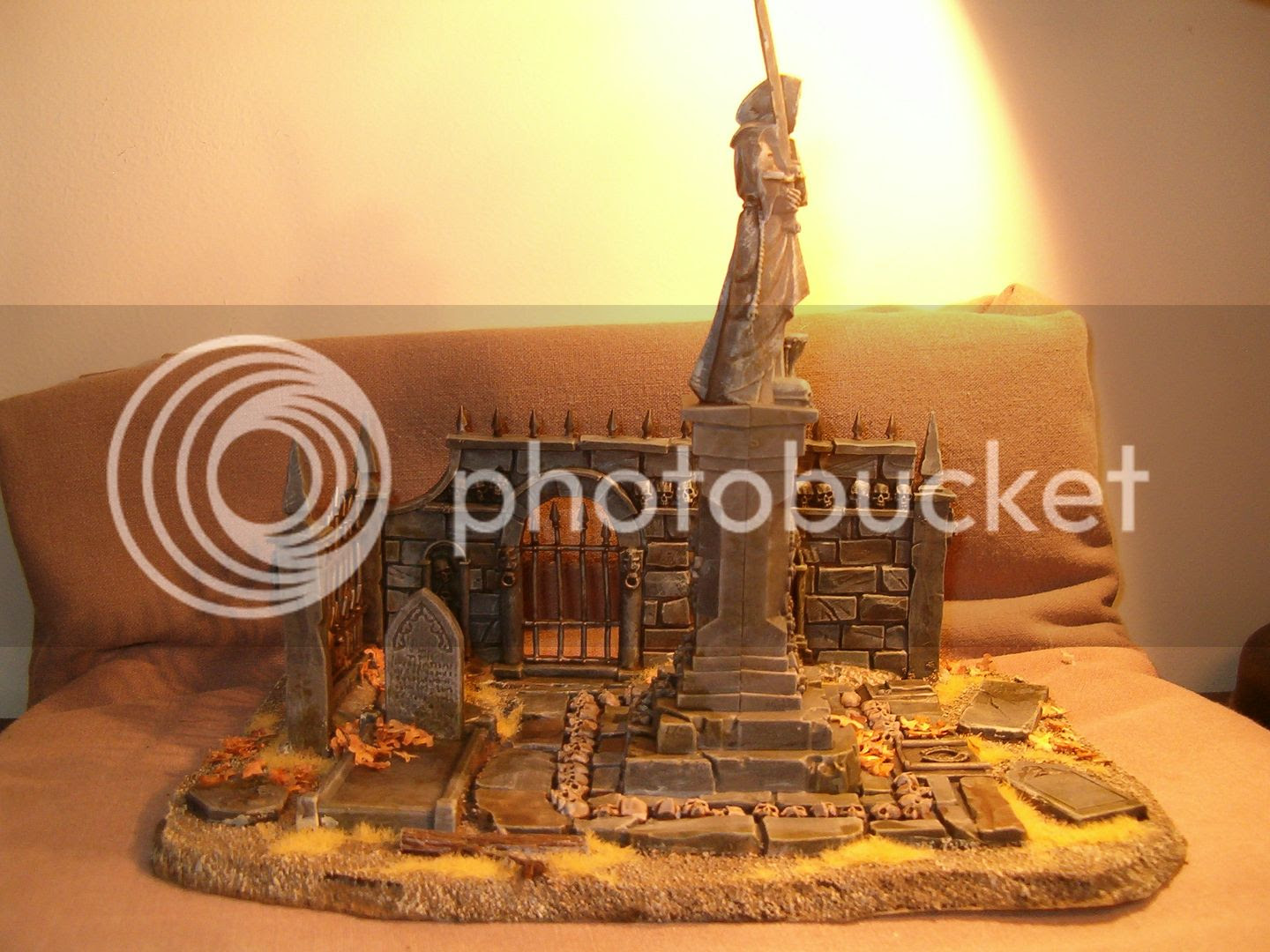 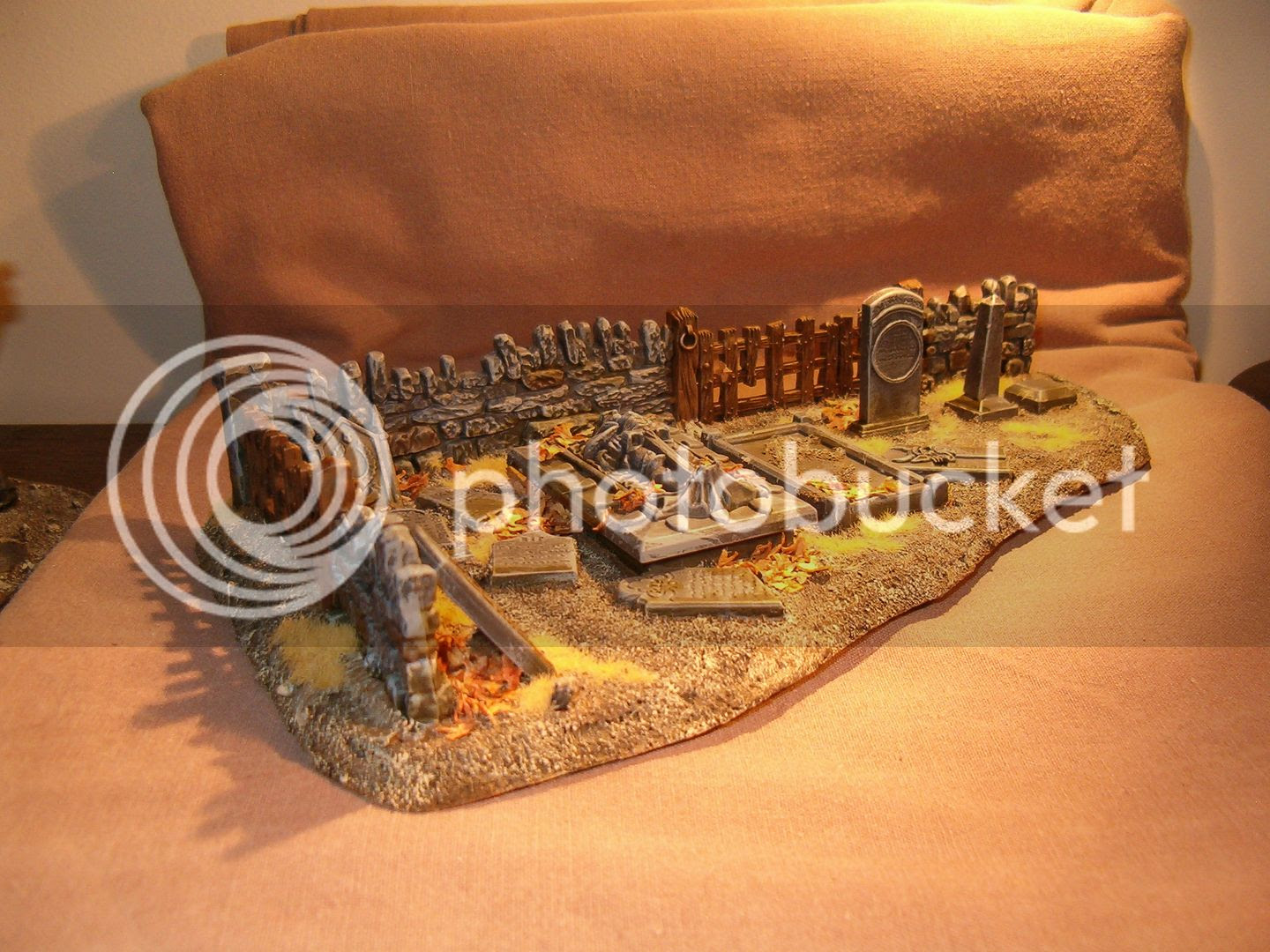 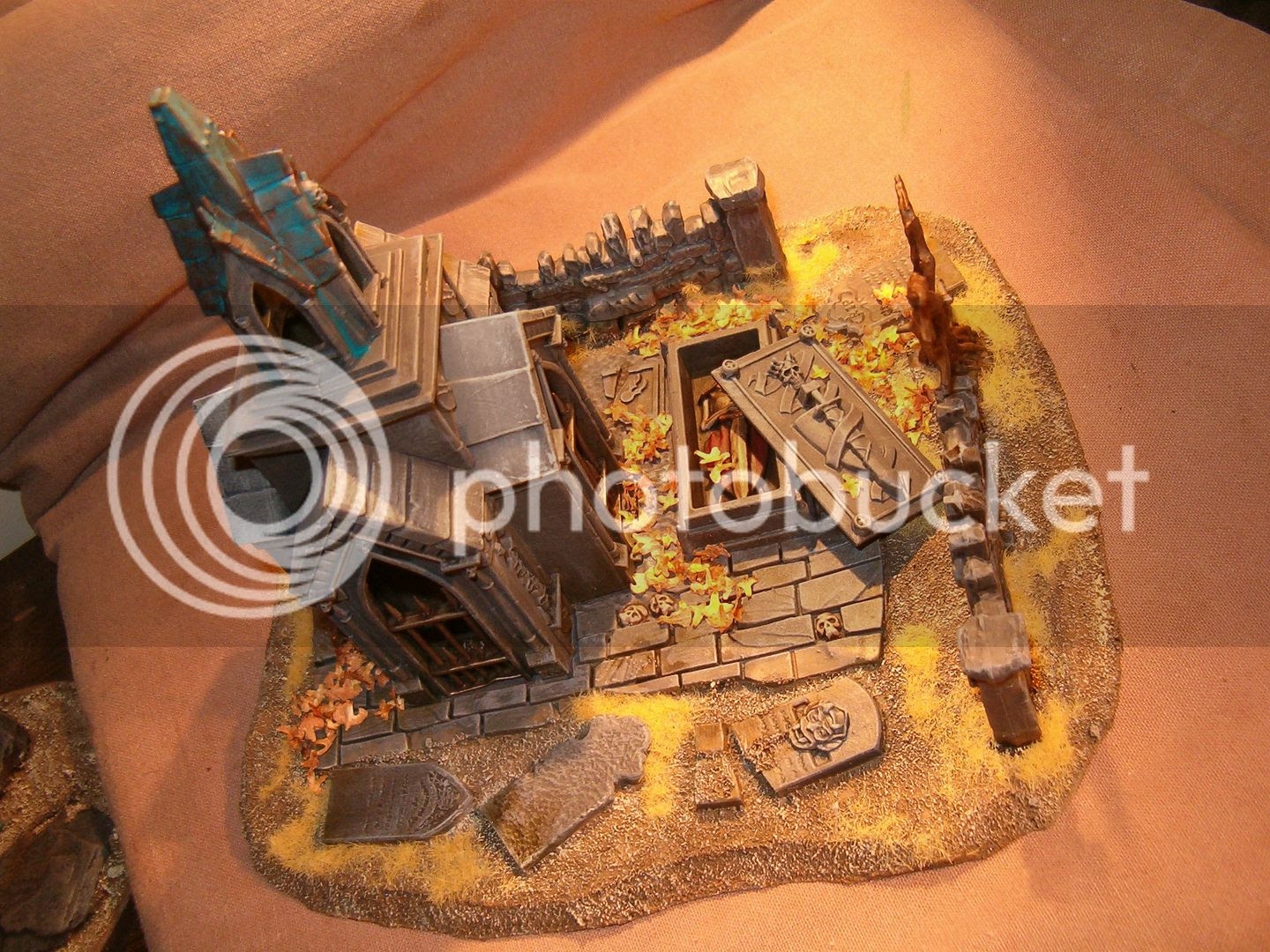 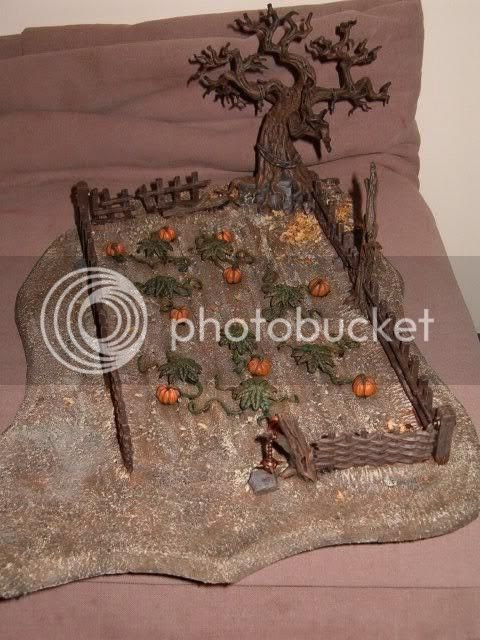 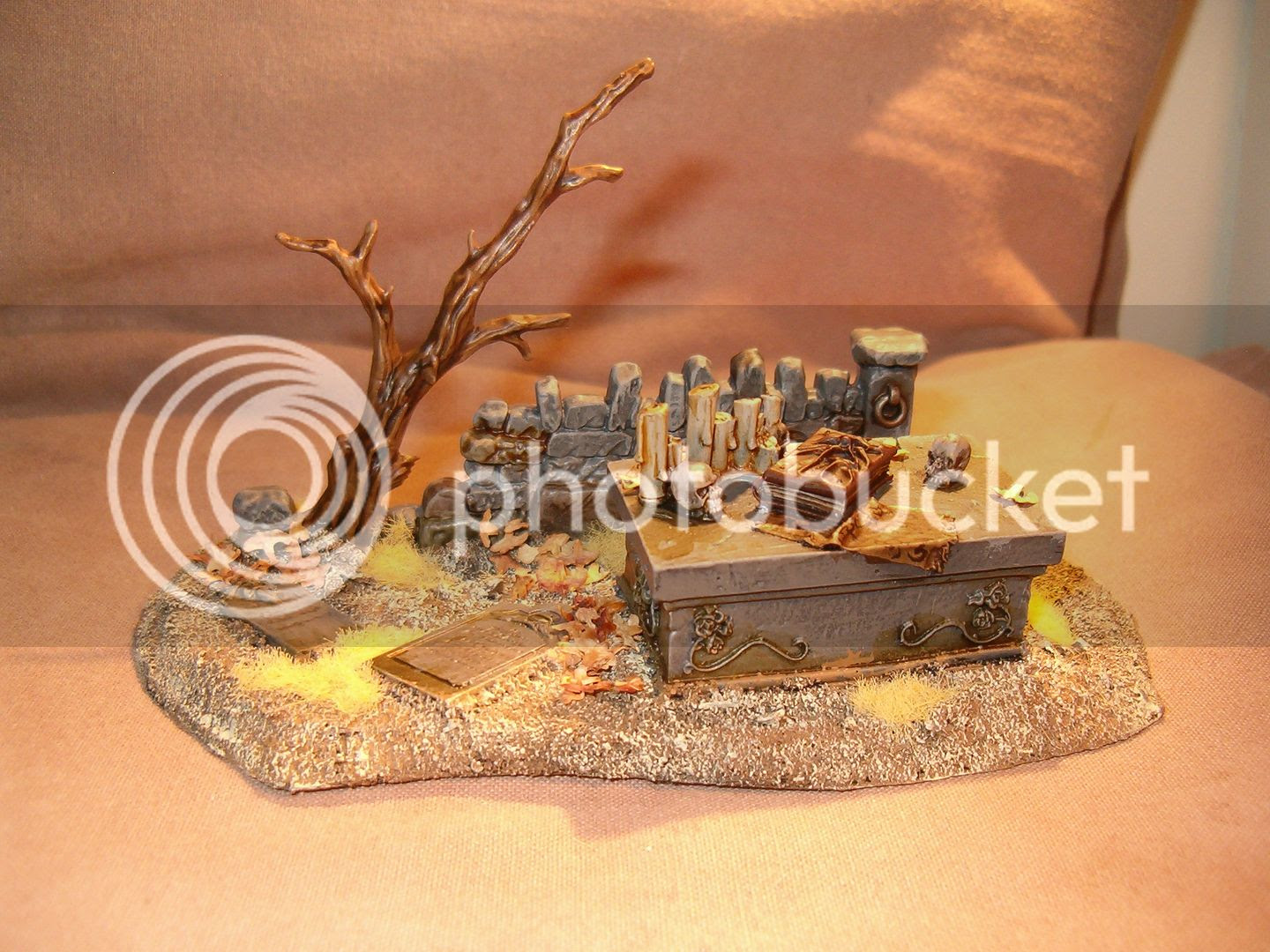 Email ThisBlogThis!Share to TwitterShare to FacebookShare to Pinterest
Labels: Age of Sigmar, Scenery, Shyish, The Mortal Realms, The Realm of Death, Warhammer, Wortbad

The Crowmoons - Orruk warband in the Age of Sigmar


The Crowmoons are a band of greenskins that dwell in underground lairs in Shyish, the Realm of Death, for a few months at a time. Occasionally they set out to raid the surrounding area. They ambush passing travelers and settlements and eventually take the loot back to their dungeon to sort, share out and eat. Before they get too much attention from those they have attacked and robbed, they move on to a new lair.

Dressed predominantly in filthy black or brown robes and rusty armour, the whole warband are garbed in the manner of Night Goblins; black hooded cowls decorated with yellow checks and dags are not uncommon.

They are not allied with any great army or aligned with any particular cause. They are just a ragtag band of greenskins, lurking in the out-of-the-way corners of the Mortal Realms, making trouble for the locals and trying not to get killed by something bigger than them. 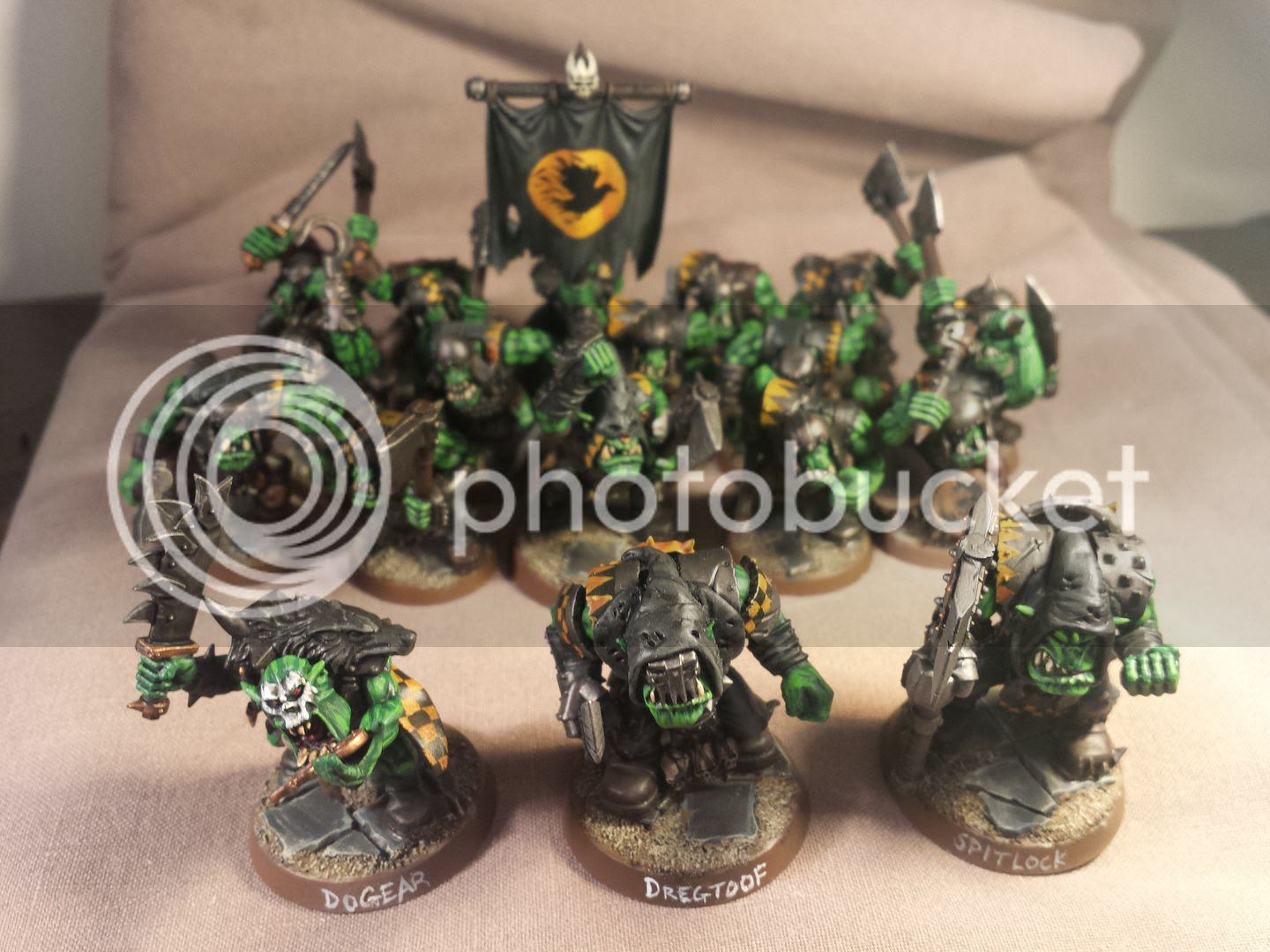 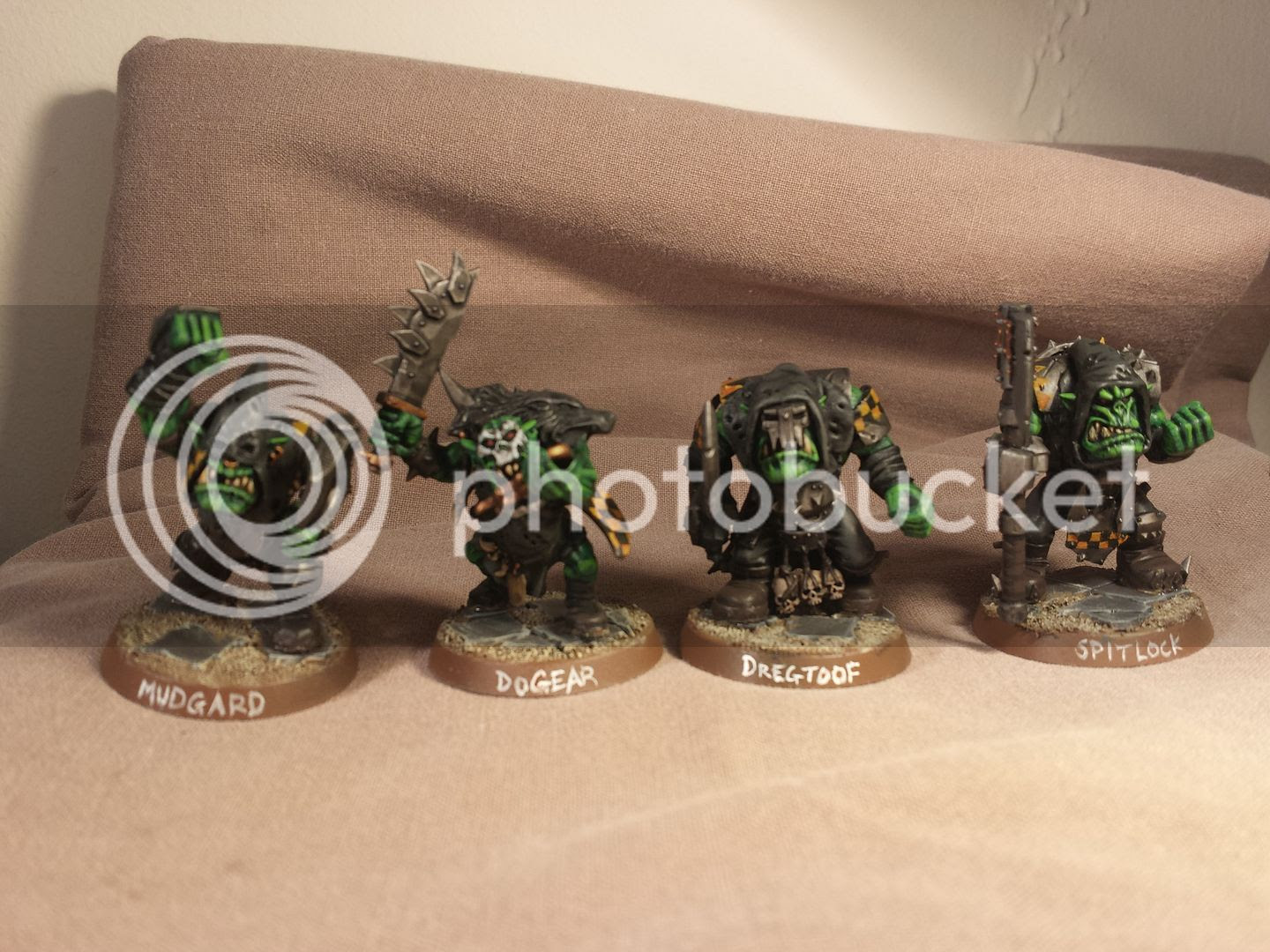 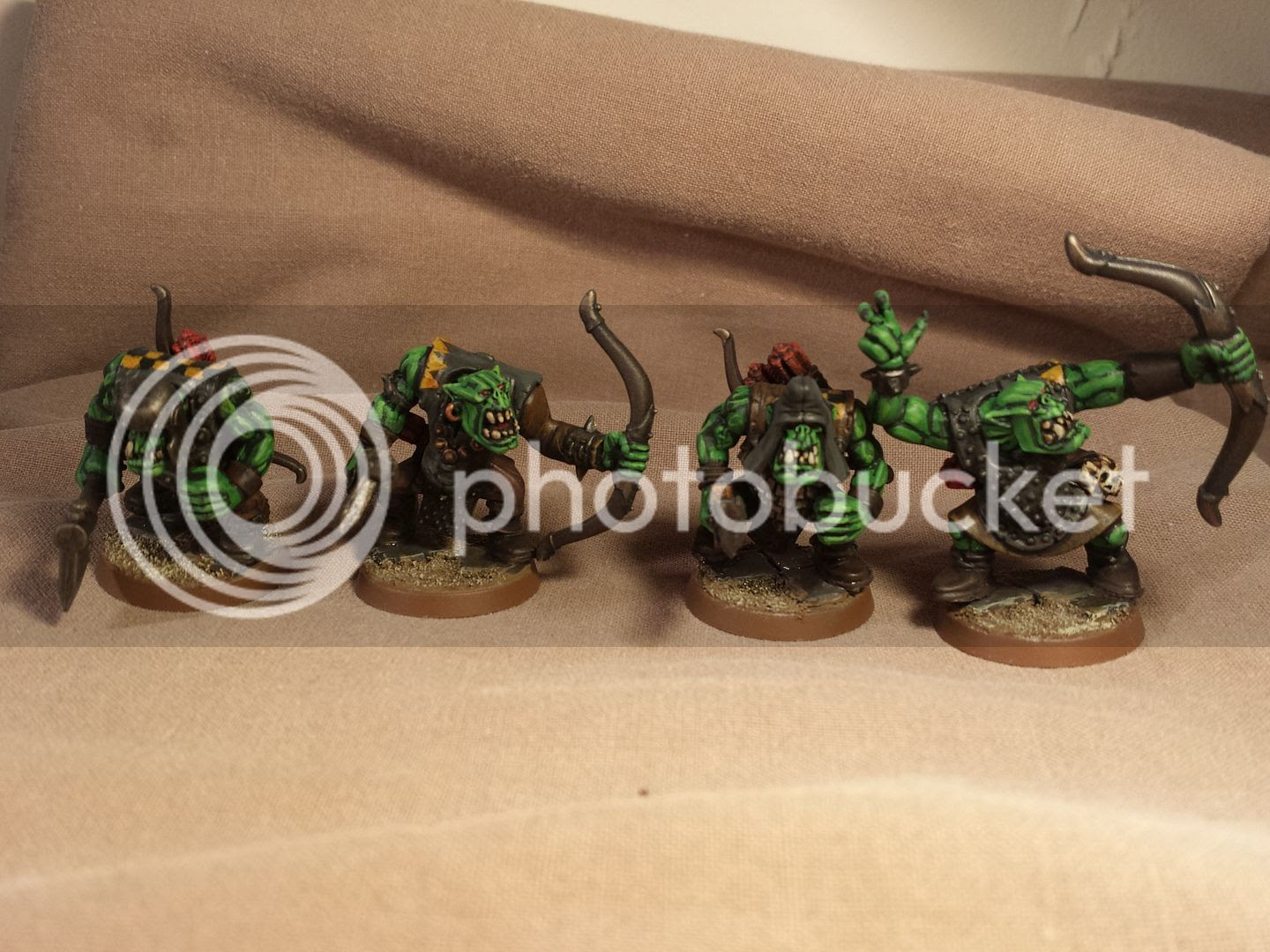 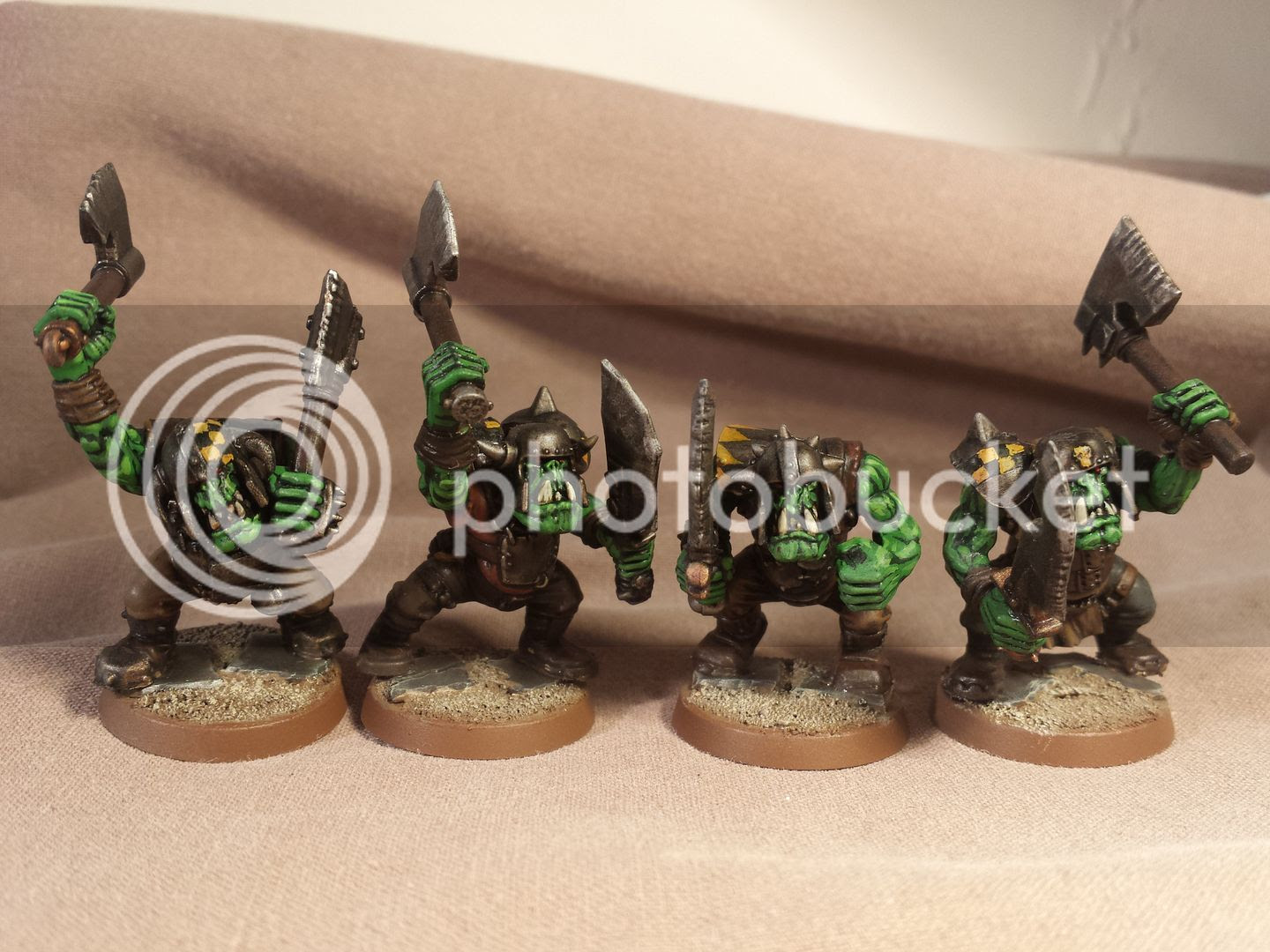 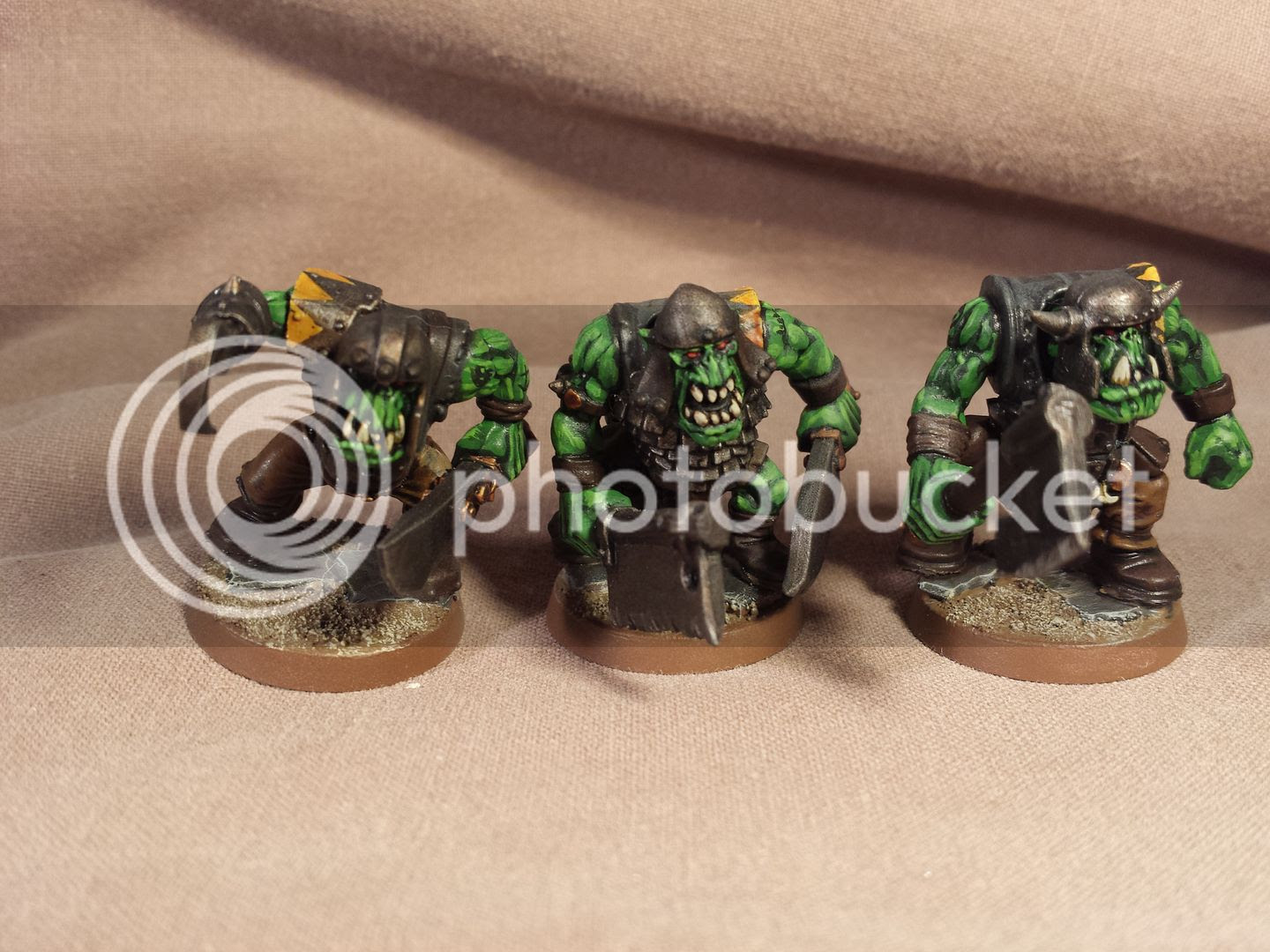 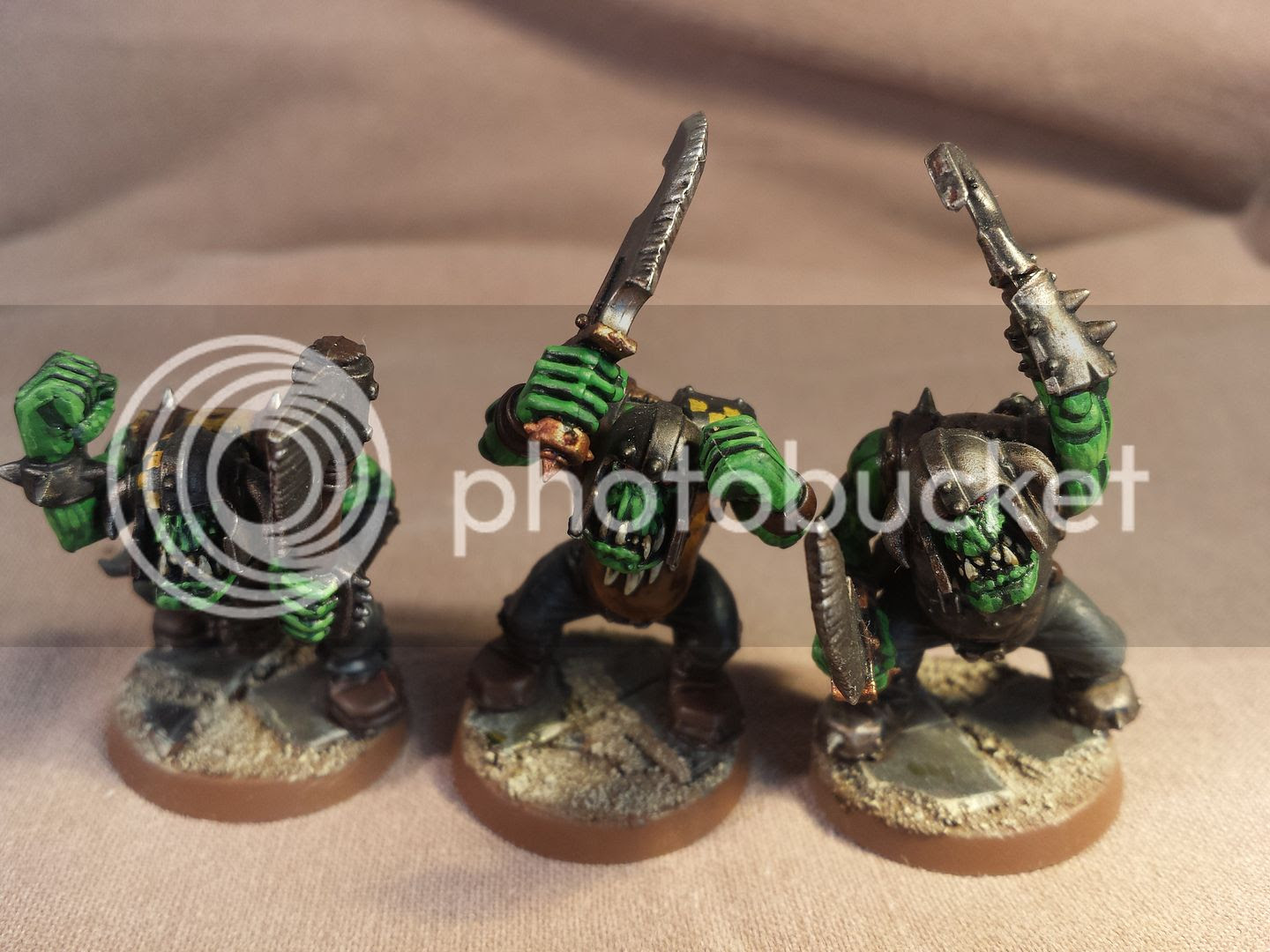 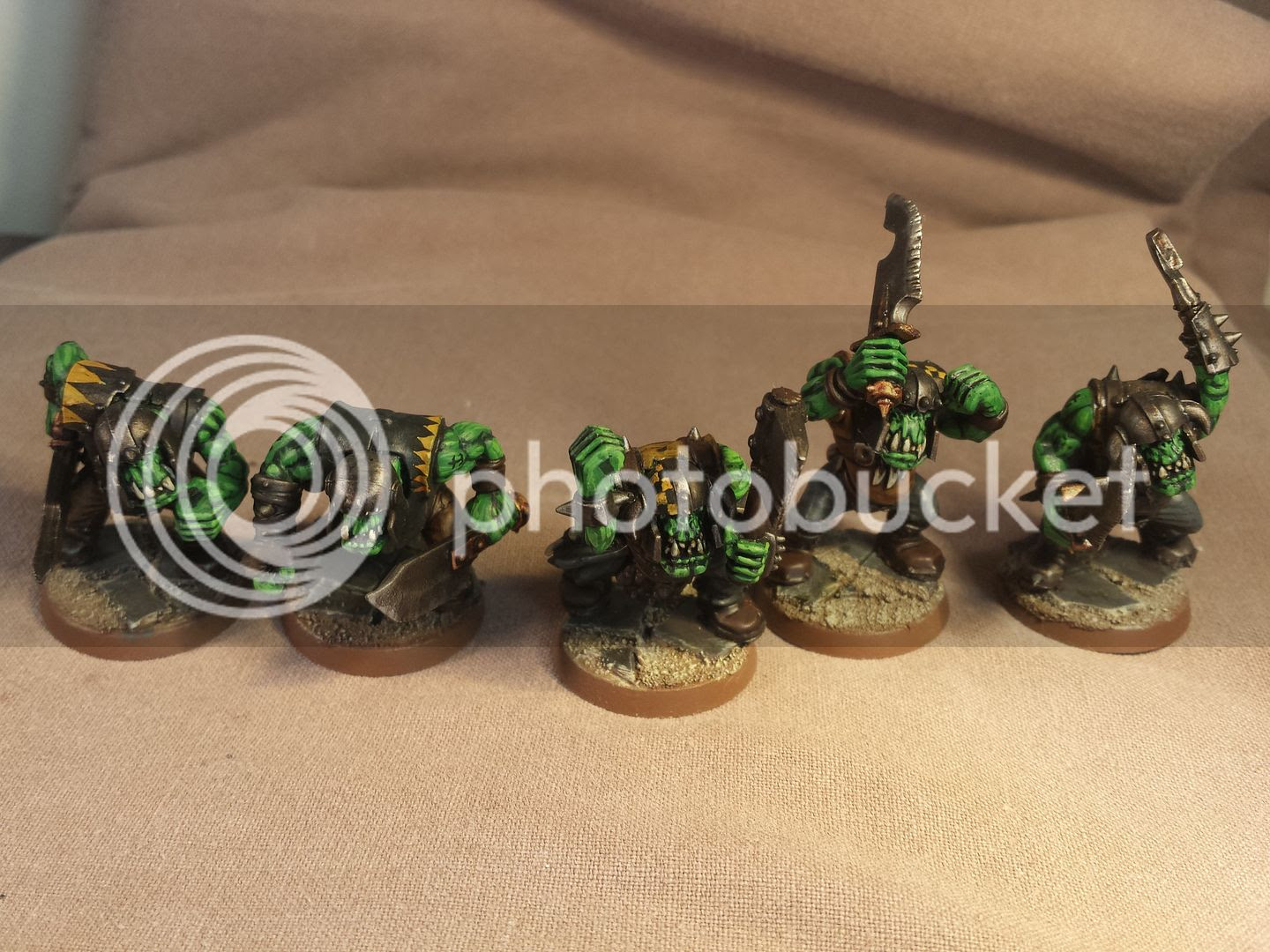 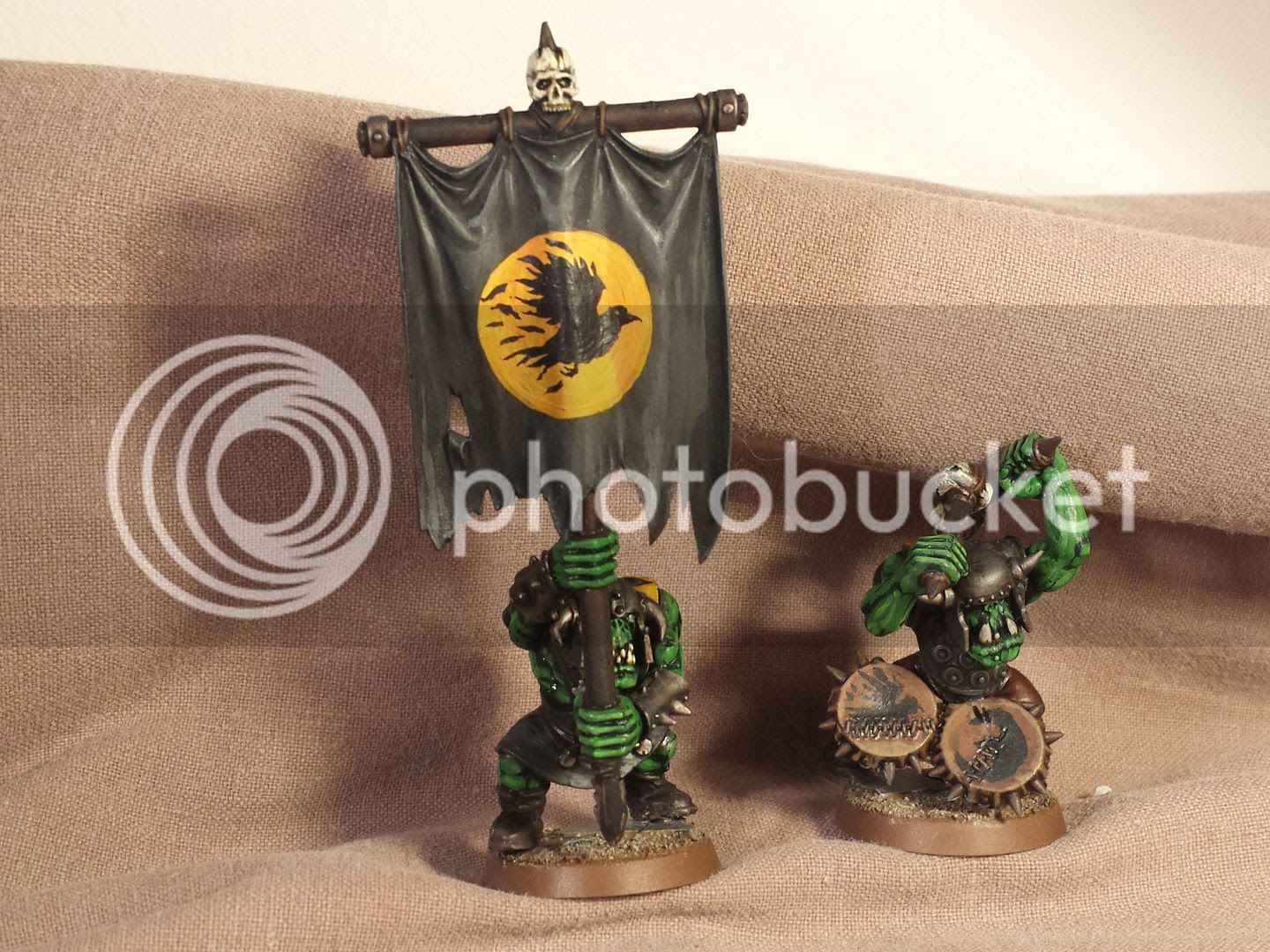