Evidence of the Guardian's activity in Mancunius Dome had been collected and placed in Broken Dock, near the Mancunius Sludge Canal. Unfortunately both Lenk and Quintus found out and both led their warbands to Broken Dock to try to retrieve the evidence before their rival could.

Lenk and the Sumptreaders advanced at the run, quickly checking three possible locations for the data. None were productive and they were quickly dismissed as unhelpful.

Quintus and his retinue gathered in the supply dump after dismissing two other possible drop sites. Only one remained - an ancient data-lectern with barely any power remaining. The screens glowed only dimly and there was a chance it's power would fail entirely before the evidence could be extracted!

Lenk, Munzo, Fishgutter, Lansen and Waldo regrouped and got ready to attack en-masse.

The Rogue Trader and Wyrd moved aggressively towards Hopper.

Quintus and his closest companions started to extract the documentary evidence of the Guardian's activity from the data-lectern as Lenk got his followers into position to attack.

Lenk and his small group charged!

Hopper blasted the Rogue Trader and Wyrd who had broken away from Quintus towards him and took them both down.

Quintus challenged Lenk to single combat, Lenk wounded Quintus but the Power Armoured Inquisitor struck him down with his Power Maul.

The rest of Lenk's band charged but Quintus and the Combat Servitor dealt with them easily, and fell back in good order into the gloom of the underhive, having achieved their goal and won a crushing victory!

Viktor was already winning on VP 6:2 when the last of my warband was killed giving him an instant win. Next week is the campaign finale!
Posted by WarbossKurgan (Saul) at 11:24 3 comments:

The Necromancer's curse has taken hold beyond salvation. Death at the hands of walking corpses seems inevitable!

Deadwalkers appeared from the woods as the Waaagh-Priest and the Black Orruks passed it.

They fell upon the Priest and his walking lectern.

The Orruk Witch Hunters surrounded the Templar and though he fought valiantly it was in vain.

The orruks win the game and the campaign! Viktor took a gamble on his warband choice, hoping that just using a handful of Heroes would stop me from getting any kills with Deadwalkers (the only ones that counted in this Battle Plan). It didn't work....
Posted by WarbossKurgan (Saul) at 08:50 No comments:

After reading the rules for Astra Militarum Veteran Squads in Shadow War Armageddon, I have started work on three more gangers for the Skinny-men so I can use the gang as "counts as" Veterans:

Oldham Mumps, a Heavy with a Grenade launcher, Trafford Bar and Edge Lane: Juves with Laspistols and knives.

Posted by WarbossKurgan (Saul) at 08:36 No comments:

More work on Kastorax - Tech-Wytch and Gang Leader of the Slipgibbets: I've added some "tech-relics" - part of an Eradication Beamer instead of the Warpstone on his staff, a broken auspex and some cables. 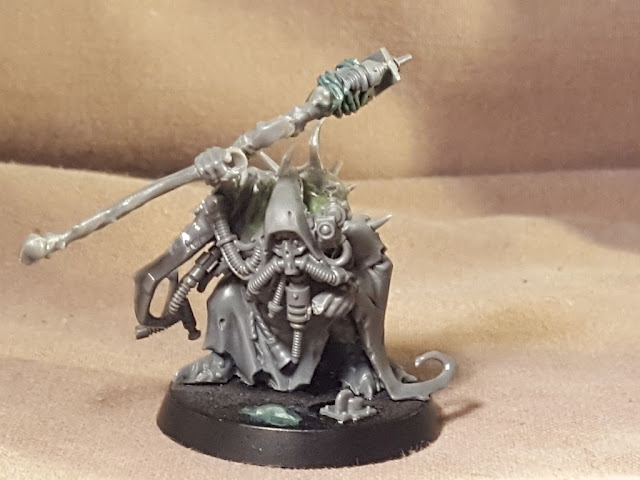 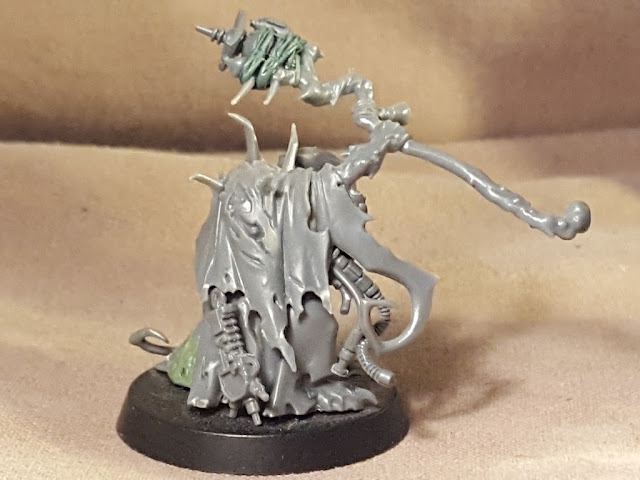 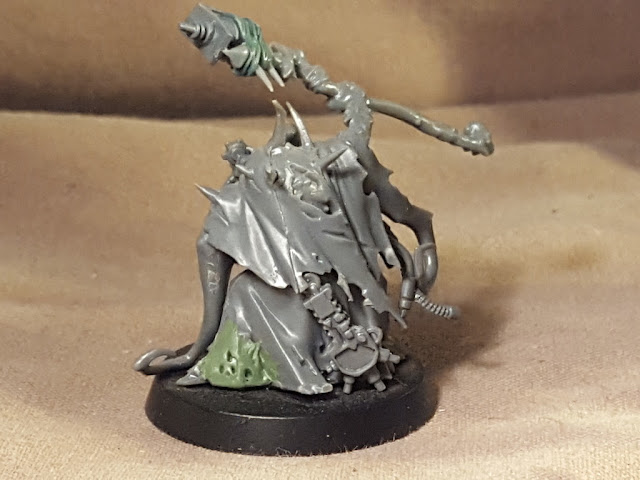 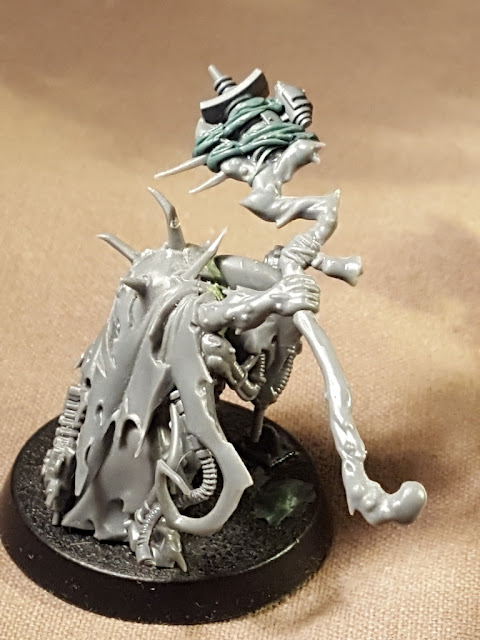 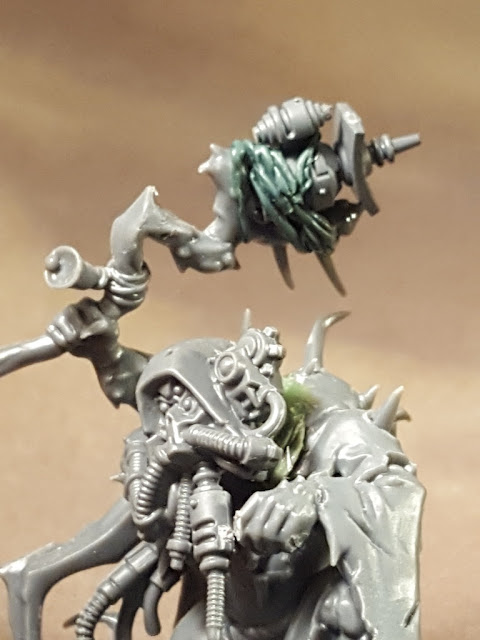 And a broken Servo Skull tech-relic for Hijack (made with the leftover skull that provided the cables for Kastorax): 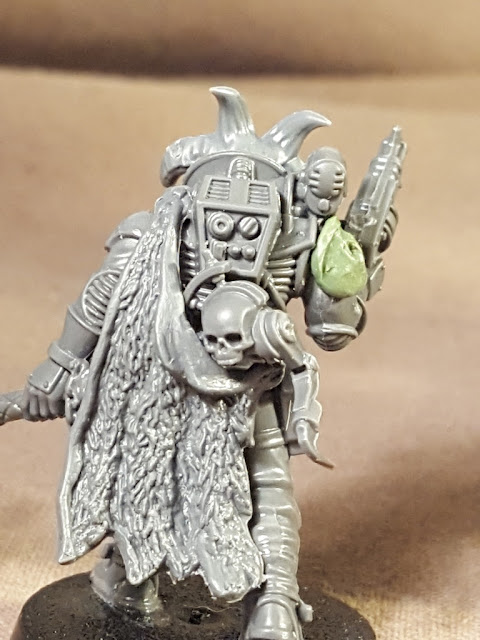 The Court of Spades, Part 4

The Court of Spades

Mordgrave, The Quene of Spades, is a Crypt Ghast Courtier in the tattered remains of a blue dress.

Pity the Quene, for when she looks in a mirror she sees a youthful face and a beautiful dress, skilfully made of the most expensive fabrics. When she looks at around she see an elegant stone-built castle with feasting tables, log fires, colourful banners and exquisite tapestries hung from the walls. When she looks at her husband, the Kyng, she sees a strong, handsome middle-aged man; noble of bearing and brave of heart.

Posted by WarbossKurgan (Saul) at 08:54 No comments:

Inquisitor Lenk was prepared for Inquisitor Quintus and his retinue by the time they arrived at Lenk's encampment. The Sumptreaders had slowed them down and they brought enough warning for Lenk's band to prepare a welcoming party.

On the right flank the Hive Gangers were all grouped together, ready to make a rush at the Astropath and Rogue Trader along the raised walkways with a storm of massed Bolt Pistol fire but the off-worlders realised the danger and fell back to their leader's position.

On the left flank Lenk, Father Korpax and Servitor Drone Mordrux prepared to face Quintus and his Combat Servitor.

Father Korpax opened fire on the Combat Servitor with his Plasma Gun, but it was not well maintained: it immediately overheated and took the Priest out in a ball of blue fire.

Servitor Drone Mordrux locked up and drifted silently for a minute or two.

Lenk rushed through the cover provided by Silo 45.

The Sumptreaders rushed across the open area in the dead ground inside the pumping station.

The Sumptreaders were in position to attack...

...When a flurry of gunfire from the off-worlders took down Rockwell and Fishgutter.

Mordrux suddenly came to life and blasted Qunitus with his Plasma Gun! The remaining off-worlders fell back into the darkness.

After the time-out at three turns the VP scores were 4 to me (First Blood and killing the enemy leader) and 2 to Viktor (1 each for Specialists killed).
Posted by WarbossKurgan (Saul) at 15:17 2 comments: