The Ironfang Pirate Fleet, part 10: Kaptain Mogrum and The Cleavermaws

I feel like I've got some momentum going with this re-basing project now!

The finished Cleavermaws so far:

Posted by WarbossKurgan (Saul) at 09:49 No comments:

We had to take it in turns to deploy each Hero no further than 12" from another model and at least 6" from all other models, starting with one in the centre of the board (in a building as it happened).

The Chimeras got the initiative in the first turn and the Djinn cast Blue Fire of Tzeentch and then fired Magical Flames at Captain Kargasson, then charged him. Big Uluc charged the human Pirate, Captain Pecker. Sinbag charged Long Drong. The Dwarf Dragon Slayer was the only one to die but lots of wounds were dished out all round.

(Viktor got the initiative in round 2, so got two turns in a row, but fluffed nearly all his dice rolls!)

The Dwarf Pirate Captain Kargasson killed the Djinn but Big Uluc wounded the Pirate Captain Pecker again. Pecker picked up a Warpblade but later dumped it in favour of his trusty Sigmarite Cutlass. Sinbag picked up a Blade of Unrelenting Agony but never got to use it but it was, again, not as good as his pair of Kutlasses.

The Djinn Binder summoned the Djinn back and it killed Captain Kargasson with fire, more fire and extreme violence. Big Uluc killed Ishmael the Wizard, wounded the Dwarf Engineer and Weird Khaaan finished of Gregorius Pecker with a smack from his Totemic Staff.

At that point we were out of time but with the kills standing at 4:1 to the Chimeras, they had won a Major Victory.
Posted by WarbossKurgan (Saul) at 09:51 No comments:

The Ironfang Pirate Fleet, part 9: Kaptain Mogrum and The Cleavermaws 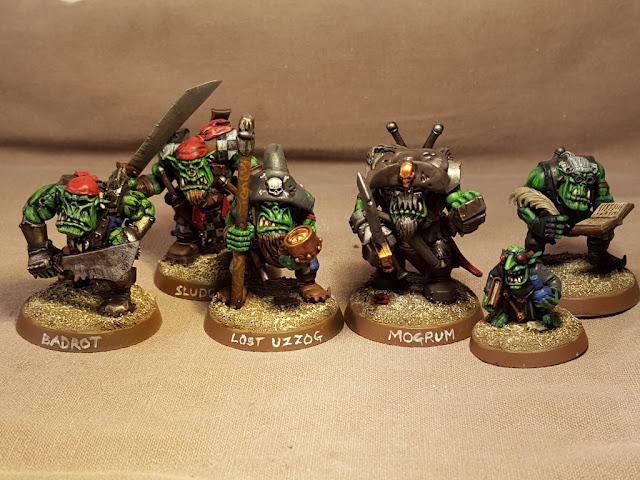 The Cleavermaws are Oruk Pirates sailing out of Blackrocks Bay, in Ghur, the Realm of Beasts.

Da Cleavermaw itself is a hulking conglomeration of different wrecked and captured ships, cobbled together over many years from their victims and any old junk they could salvage. The prow and stern are completely mismatched and it rides the waves in an ungainly, awkward way. It looks like a dog, steers like a cow and smells like a slum. Luckily it also packs a punch like a prizefighter: it is equipped with mechanical contractions to grapple and board an enemy and vast amounts of heavy artillery.

Her commander, Kaptain Bilgewater, was quietly mad - he firmly believed he was a serving captain in a "Royal Navy", rather than in a pirate fleet, under the command of "Admiral" Kurgan Grimjaw and serving a Prince.

He ran his crew on the lines of a formal national navy: ranks, discipline, rum-rations, attacking "enemy" vessels, and writing long tiresome written reports to the Admiral. His crew knew they were really pirates but they tended to go along with him as he always managed to find a good fight - though they were never really happy about the way he ran the ship. Unlike most pirate crews the Cleavermaws weren't very interested in gold or money, just materials that will enable their continued cruising and fighting. Anything they find aboard captured "prize" vessels that isn't immediately useful was sent back to the fleet.

But, as with groups of greenskins everywhere, if they are left to their own devices for too long things turn ugly. After a particularly long cruise, with no enemy in sight, fights started to break out below decks. Orruks are used to this and consider it their right. The also consider it perfectly normal for the Boss to wade in, crack a few heads together and stop the fight before it gets too messy. But Bilgewater went berserk: He had many of the crew flogged half to death "Ta restore a bit o' order".

This wouldn't have been a disaster if he hadn't taken a further step. A step too far for most of the Cleavermaws: he emptied the rum overboard!

That night there was a secret meeting in the depths of the forward cable tiers - a group of Big'Unz (Mogrum "Da Butcha", Mr Sludga, Lost Uzzog the Shaman, and even Mr Badrot - Bilgewater's first mate - among them) got together and plotted to overthrow Kaptain Bilgewater and his cronies.

Mogrum led a mutiny against Kaptain Bilgewater and took over command of the Cleavermaw. Bilgewater, his officers and his "redcoats" were marooned on a desert island while the rest of the crew sailed away without them.

Kaptain Mogrum Da Butcha
Skull-faced mask, big floppy hat, long red coat, festooned with pistols.
He is completely obsessed with closely examining the captured papers, maps, charts, orders, logbooks and letters - he has standing orders for the crew to gather them from captured ships. He hoards them in his cabin and, along with his clerk, pours over them for hours in the night making details notes and trying to fit them together or to make sense of them as a whole. 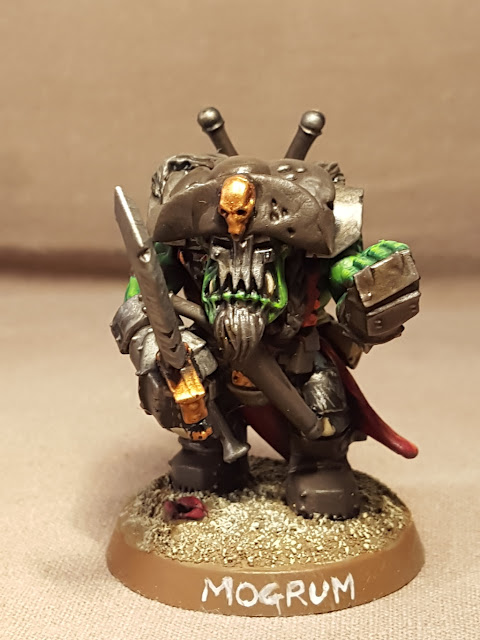 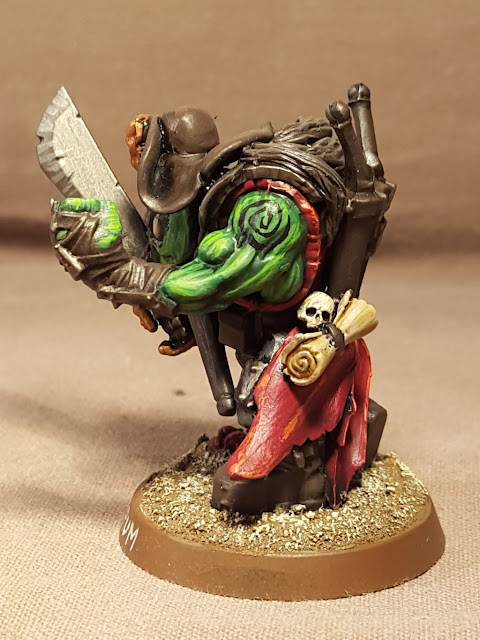 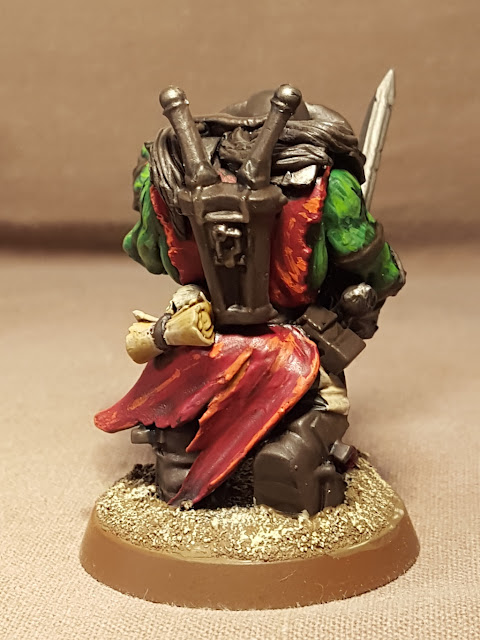 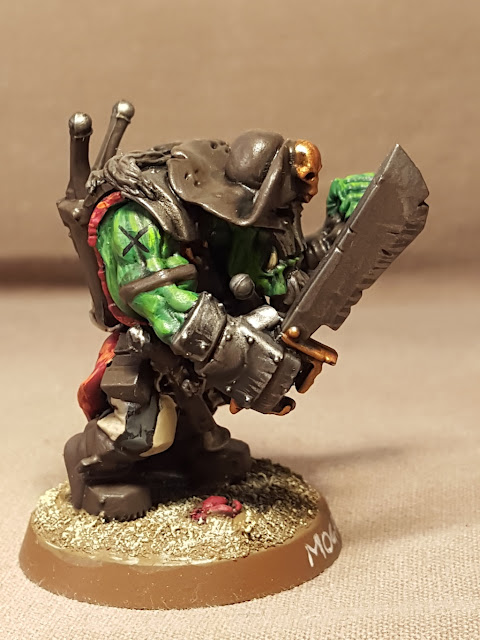 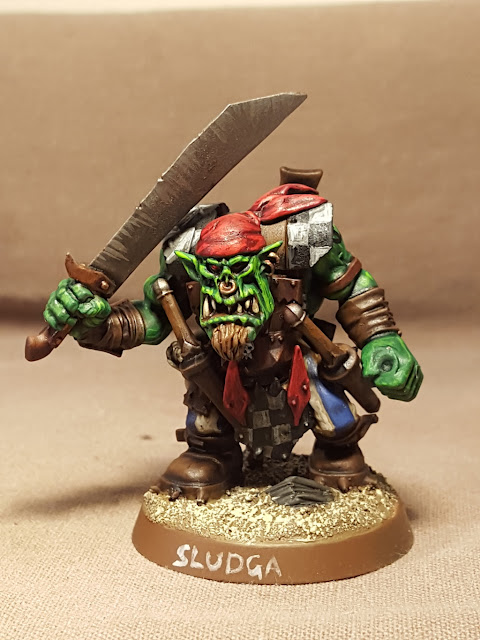 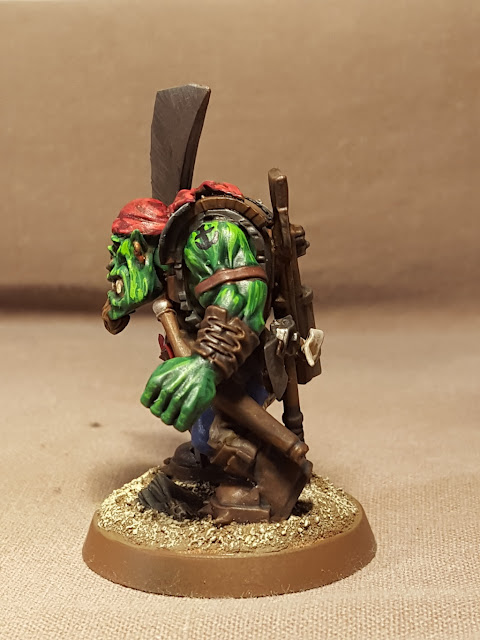 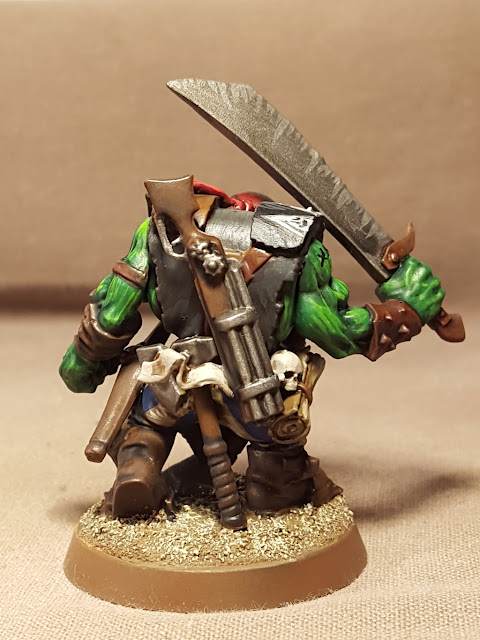 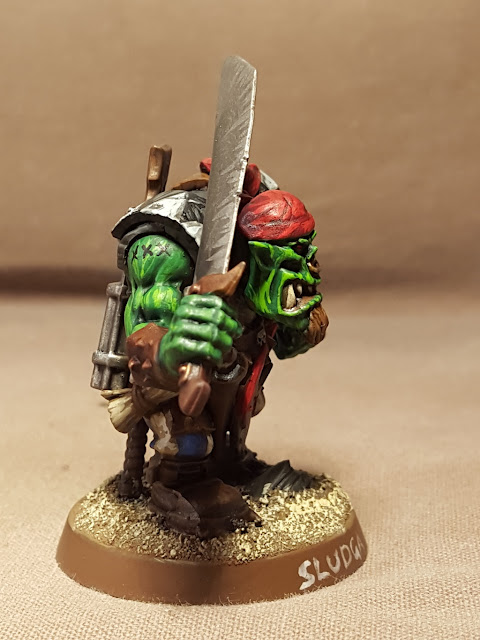 Lost Uzzog
Orc Shaman in a huge hybrid wizard/pirate hat with a tall (bent) point and a very broad brim, folded up at the front with a skull & bones pin, long beard, staff, compass, spell book and scroll. 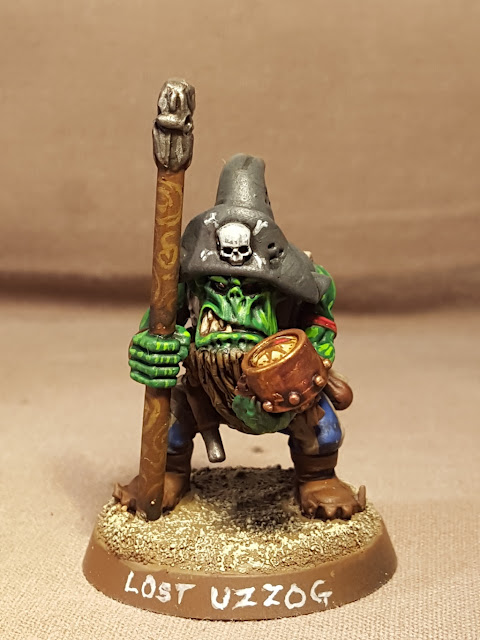 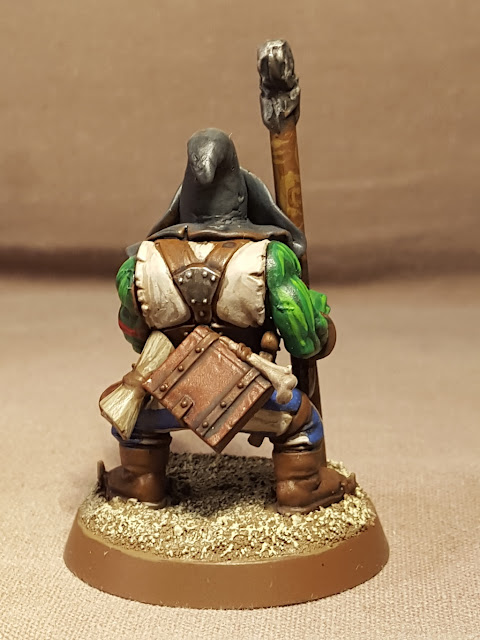 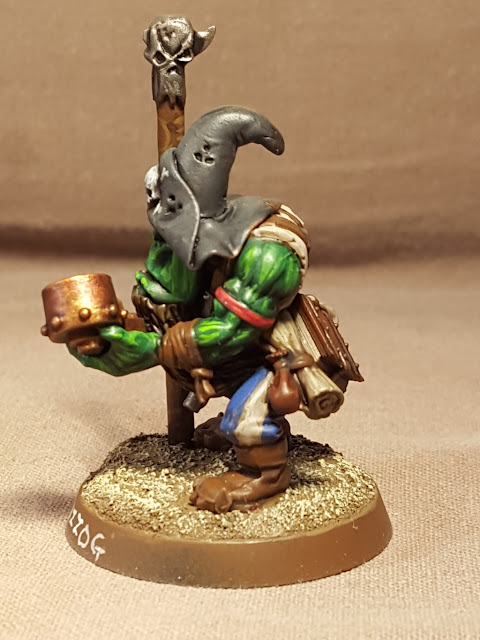 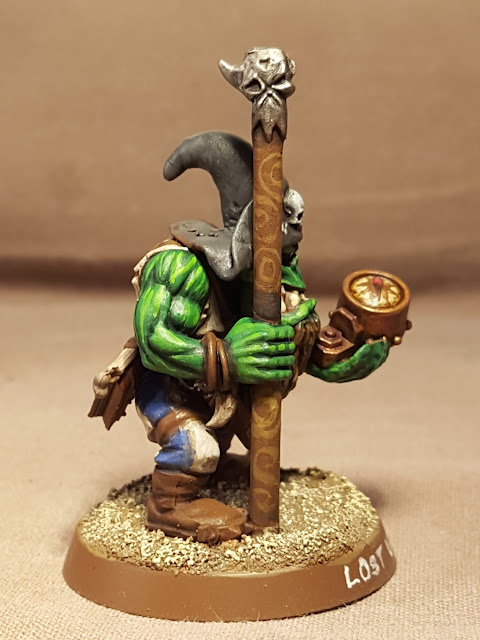 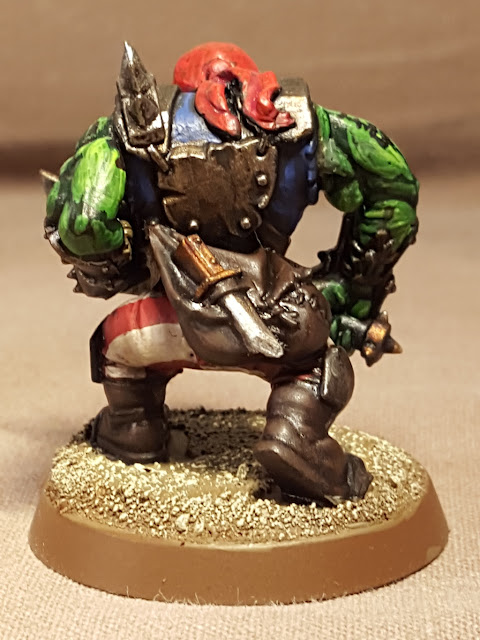 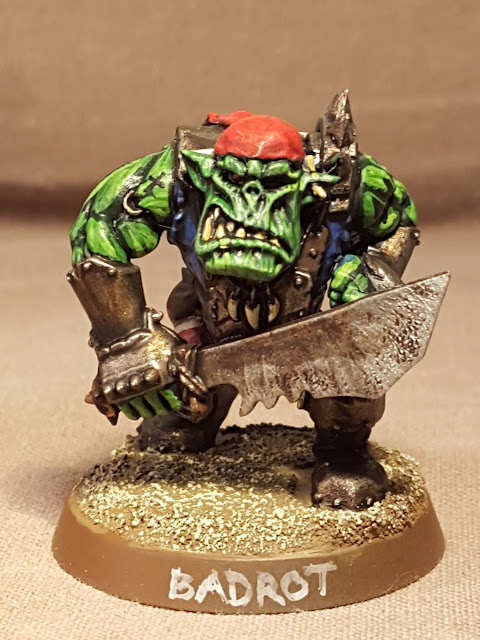 Ledger Nud the Kaptain's clerk and Skribla his Goblin assistant. 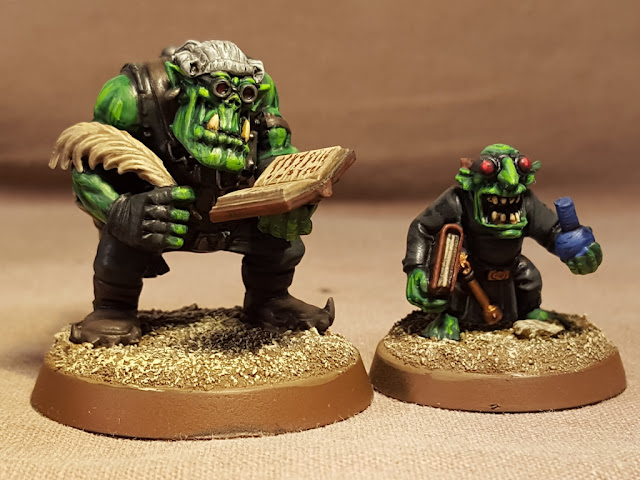 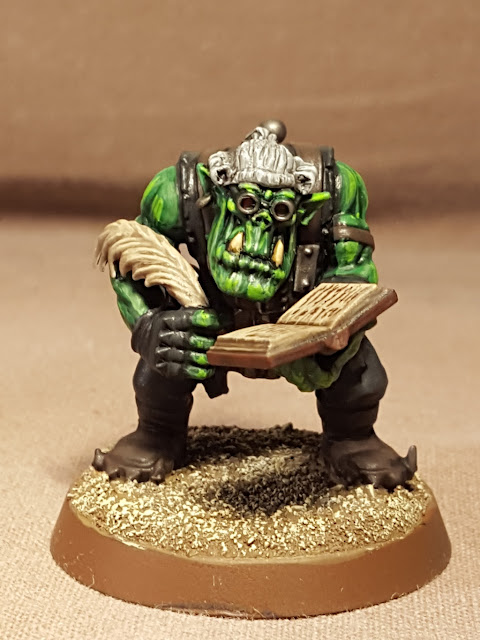 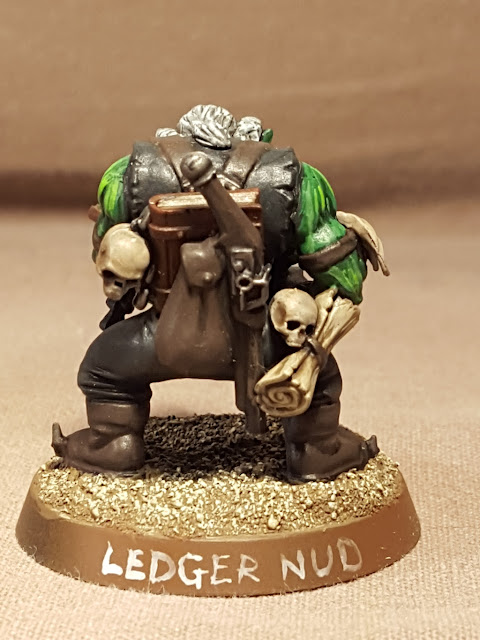 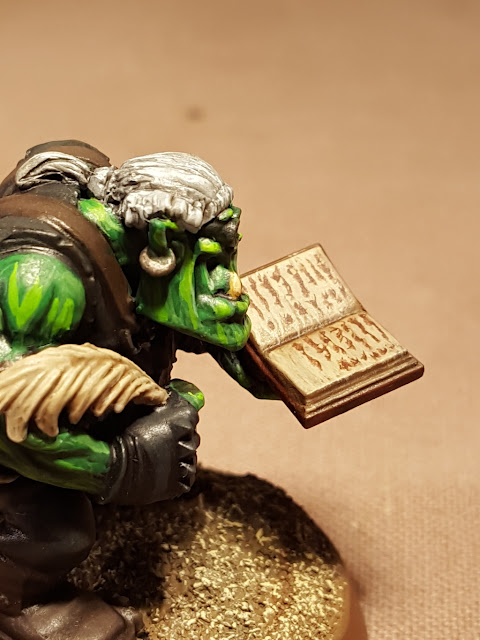 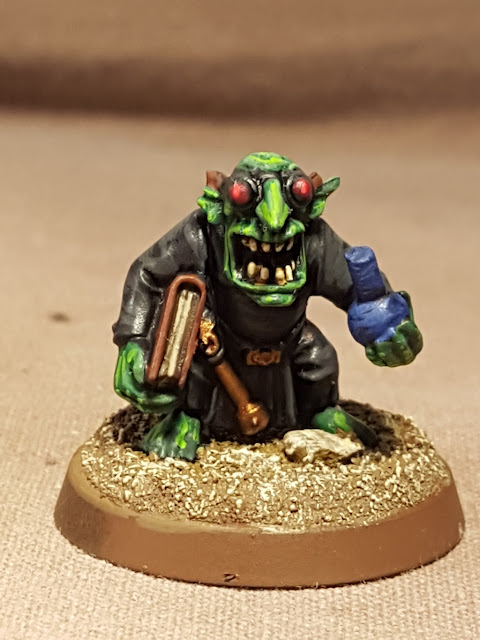 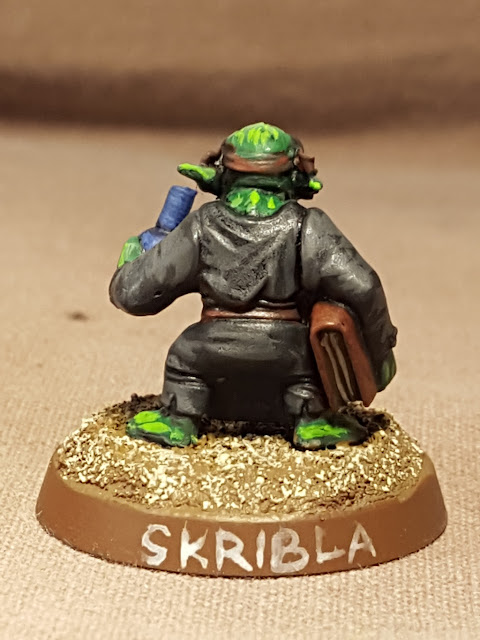 Posted by WarbossKurgan (Saul) at 10:32 No comments:

Throne of Skulls: Clash of Empires (Break Through)

Sinbag scratched his goatee beard as he peered through his spyglass. There wasn’t much of the city visible in the low light but there was definitely something moving through the ruins. He slowly panned across the vista of broken buildings. He stopped suddenly - there! Between the quays and the waterfront warehouses a small group of Duardin were moving something heavy on a wheeled carriage. More Duardin joined them from a side street and started heading towards his roof-top vantage point.

He turned to Weird Khaaan and said “What d’you fink? Shall we try the big smelly ladz out?”

“The keys that open doors are the keys that close them, and the keys in chains have nothing but the drama of tinkling.” said Khaaan.

“Right. Yeah, there’s that I suppose.” said Sinbag. “Let’s gather the crew and see if we can clear this lot out of our territory.”

Badbad and the Sea Trolls were herded forward by Sinbag, ahead of the other Chimeras, they lumbered along oblivious to the hammering they received from cannon, handgun and crossbow - one of the Trolls fell and the rest hardly noticed.

The Duardin Pirates advanced slowly, pouring a withering bombardment into the Corsairs’ lines.

The Slayers crashed into the Trolls, just inside Chimera territory and took down one of the brutes.

Sinbag roared and the Orruks joined in his guttural warcry. They counter-charged the Slayers and swept them away.

The cannon spoke again and all but annihilated the Orruks, keeping them out of Duardin territory and reducing the Orruk warband so that they could not hope to contest the ground. The Corsairs fell back from the battlefield knowing they could not win this day.

The Duardin earned 2 Laurels of Victory for having 5 or more models in enemy territory at the end of a round. The Orruks could have earned 3 Laurels the following round, but the cannon reduced their total numbers below the 5 model mark needed, so they only earned 1 Laurel from keeping the enemy out of their territory at the end of the next round.

2:1 - Major Victory to the Grudgebreakers.
Posted by WarbossKurgan (Saul) at 12:32 No comments: