At Inquisitor Lenk's request, the Sumptreaders tried to stop Inquisitor Quintus Severus and his followers from breaking through their lines.

The Sumptreaders split into three groups:

Lansen and Fishgutter waited by the broken pipe.

While Munzo scouted ahead alone...

...and found he was facing a Pyro Wyrd!

Cole the Heavy started climbing the tallest tower he could find while Webber, Hopper and Waldo prepared themselves to rush the Combat Servitor.

Rockwell (the moonfaced Bounty Hunter) was gunned down by Quintus and Munzo was barbequed by the Wyrd!

Webber was shot as he charged. Hopper and Waldo assaulted...

Quintus Severus  got the drop on Lansen and Fishgutter.

The Inquisitor took down Fishgutter and squared up to Lansen.

The rest Inquisitor Quintus's retinue had rapidly broken through the Sumptreaders' lines and were closing in on Inquisitor Lenk's temporary camp!

Kastorax - Tech-Wytch and Gang Leader of the Slipgibbets.
He still needs something done with his staff, some kind of useless technical gubbinz as a sort of symbolic techno-barbarian totem. 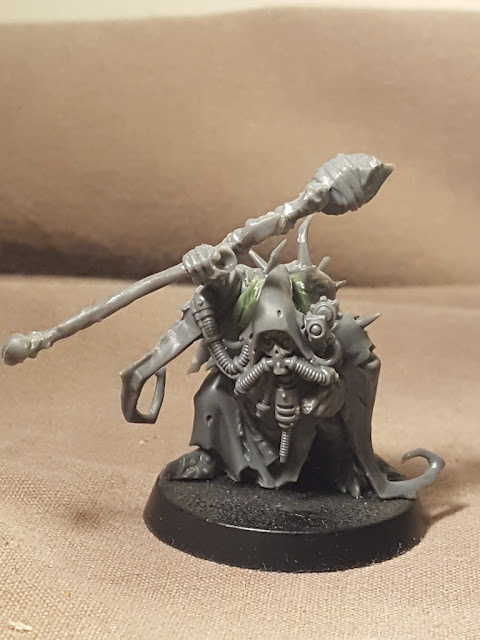 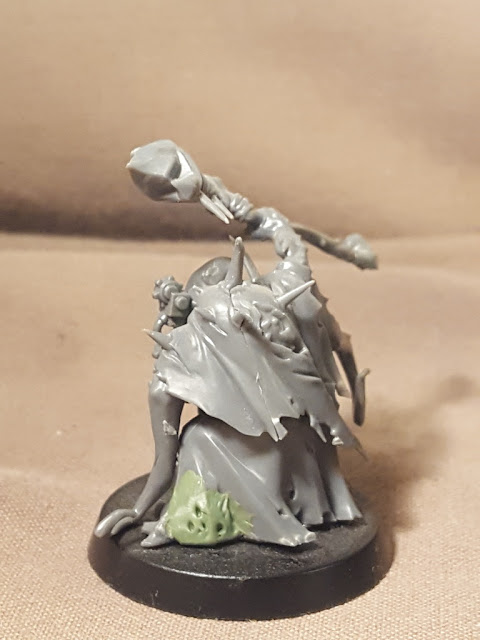 Atlas - very tall Mutant Ganger with a withered arm.
WIP. Needs some mold-lines cleaning up, and maybe a different pistol, but I'm generally happy with where he's heading. 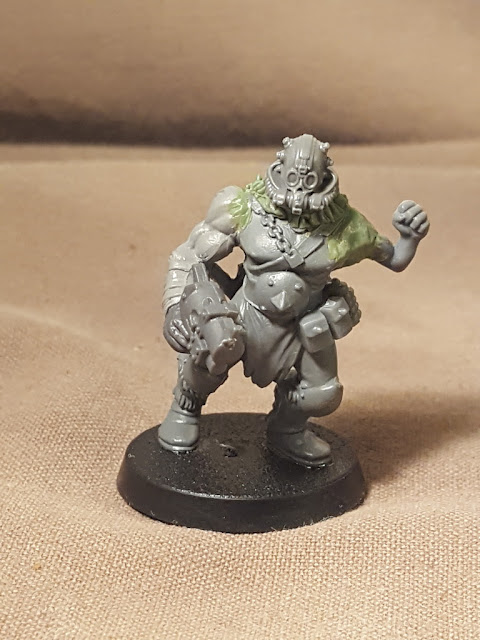 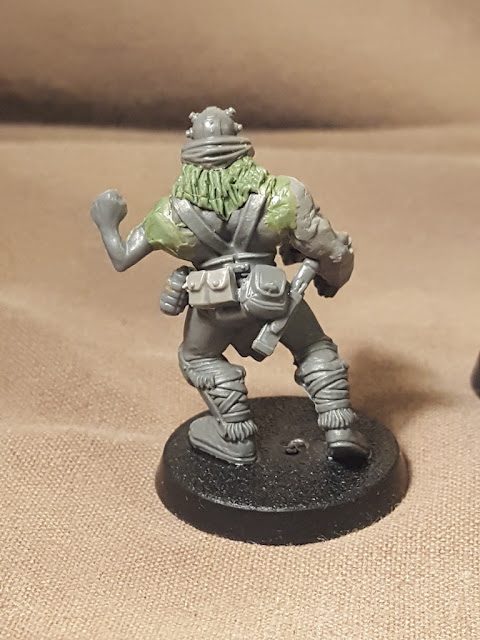 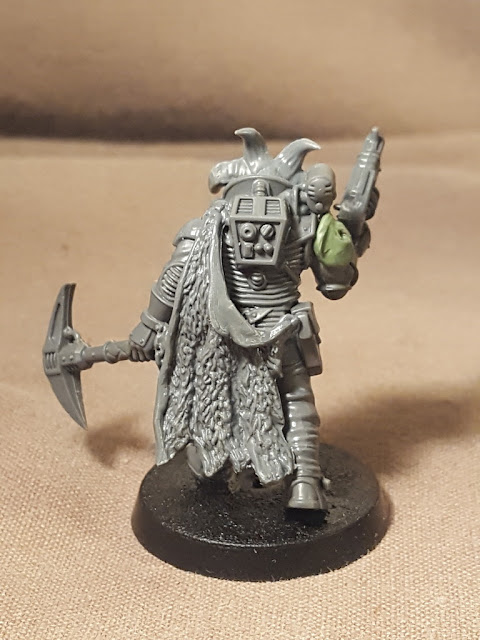 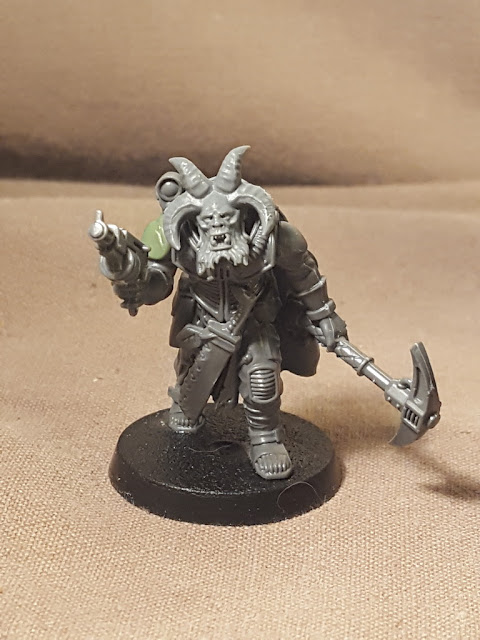 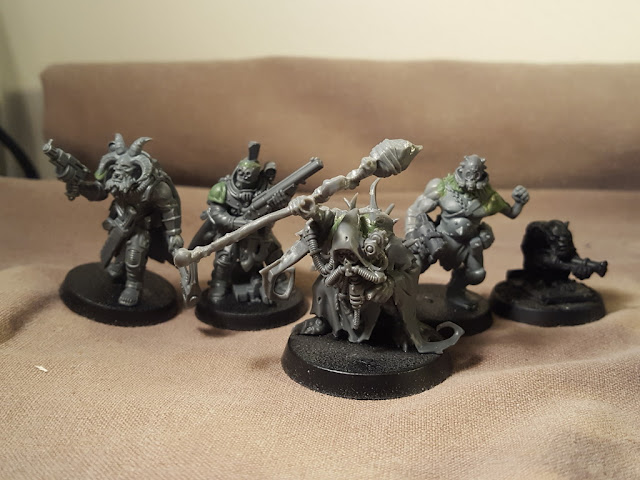 Posted by WarbossKurgan (Saul) at 09:42 No comments:

Can you hear the engines starting?
Can you feel the boiling blood?
Can you see the storm approaching?
War in the sun. 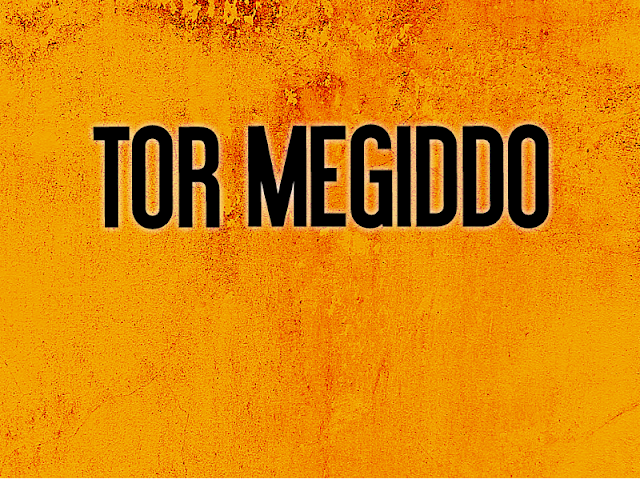 The land shakes beneath the fury of the storm.
The sand is drenched in blood and oil.
Most holy Promethium, it fills our veins with wrath.
Ride forth warlord! Blessed by the Cog and the Bolt!
Wage war in the sun!

I'm excited to be able to say that I’ve been invited to the Tor Megiddo event hosted by Alexander and Wilhelminiatures!

To say that I am honored and somewhat overwhelmed to have been included in such an illustrious line-up is a massive understatement! The other people on the list are some of my hobby heroes - people whose work I have followed, enjoyed and tried to emulate, for years.

The desert setting in the background outline provided by Alexander in the invitation instantly set cogs whirring in my mind - and the Carl Critchlow illustrations of Logan's World in WH40K Rogue Trader came back to me very clearly: 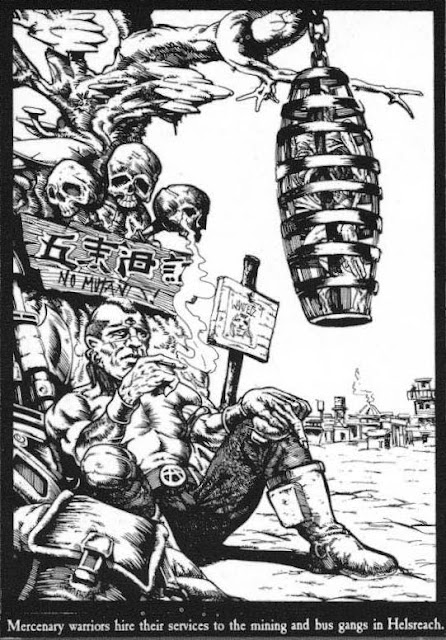 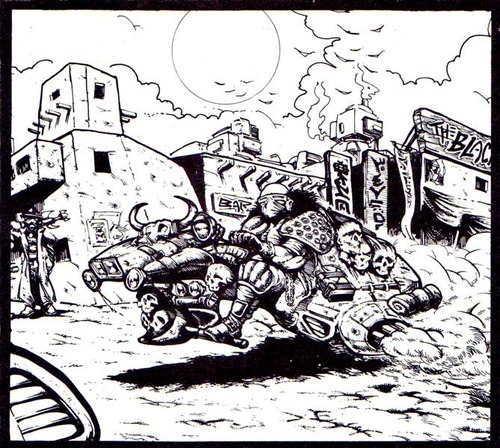 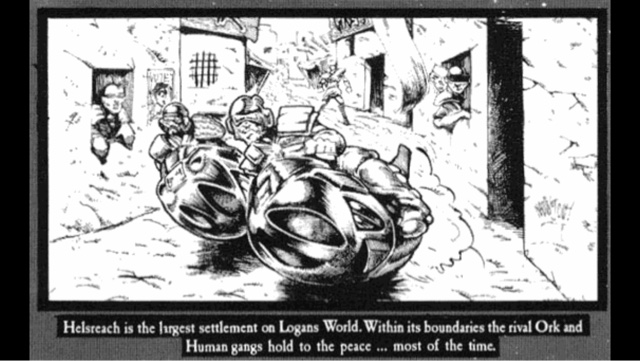 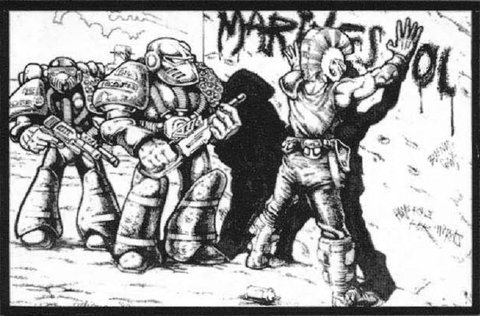 I had been planning to make a small mutant warband as NPCs for Mancunius Dome games this year anyway, but now they will be desert-dwellers instead of Underhivers (though they may end up doubling as Underhivers later!)

First up is "Flood". A mutant Ganger with double-barrel shotgun and a “hidden” tentacle (made from a Genestealer Neophyte with a Wolf Scout mohawk spliced onto the top of his head, a Marauder cloak, a Skaven tail as a tentacle and a bit of greenstuff work). 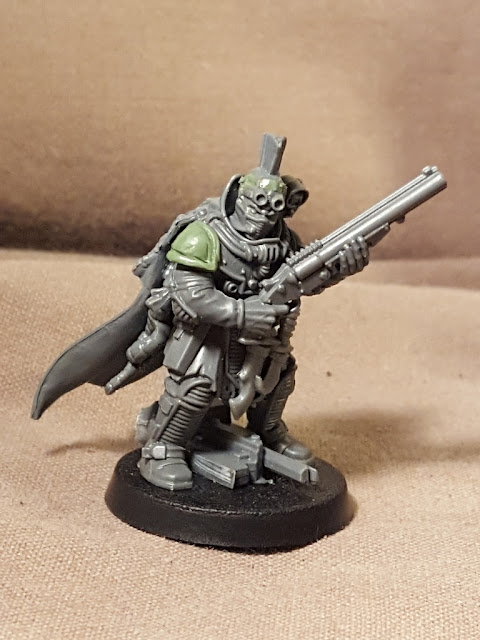 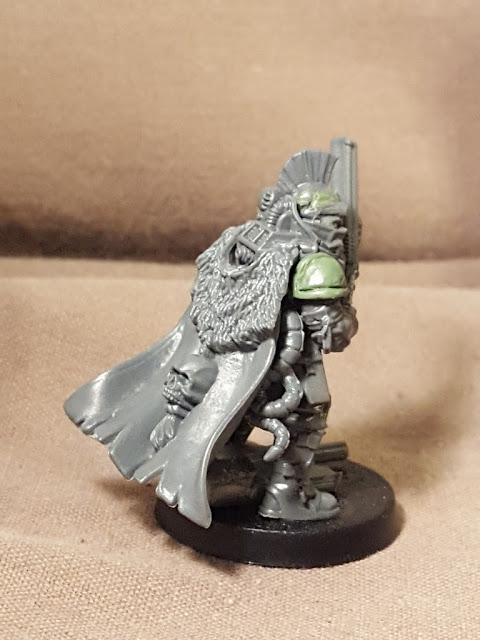 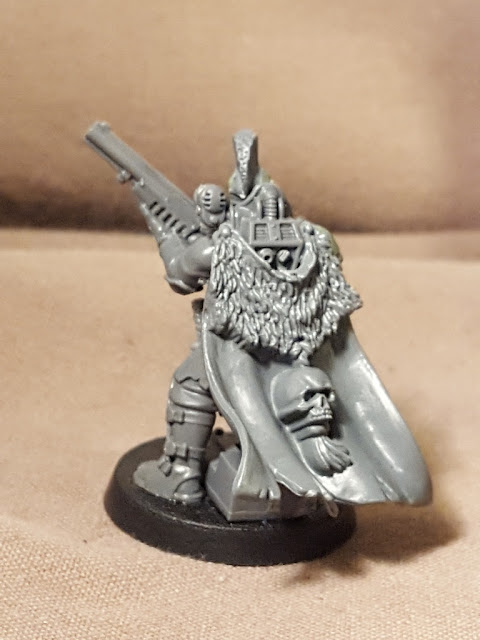 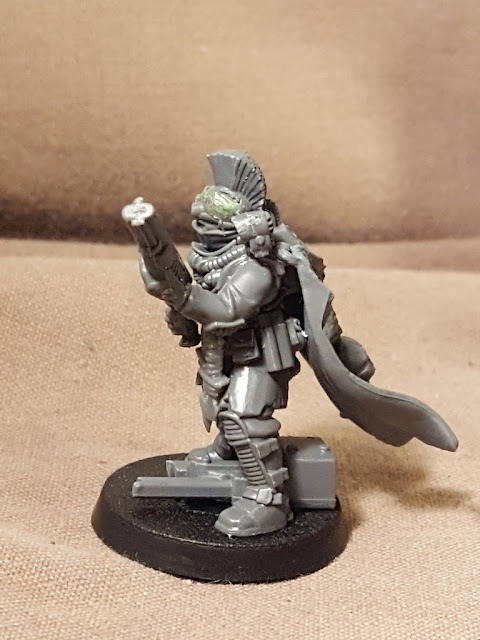 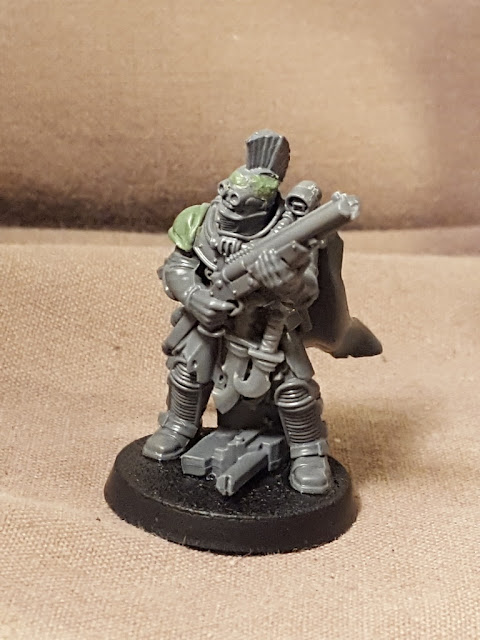 The villages of the Harrowmark are isolated by the vast and malignant forests that envelop them and cover most of the region. The dense, twisted woods are punctuated by rocky hills and outcrops that stand clear of the tangled trees like islands. A few gnarled and wind-swept trees cling to their sides and scrubby bushes and grasses hide in cracks in the stone. Some hills have clusters of houses or watch-towers huddled on the top or steep sides and most of these are accompanied by a wooden landing stage, used by flying ships to tie-up.

The villager's only connection to their neighbours is by the flying ship trade routes overhead. None dare to set foot in the forests, the risks are just too great: the creatures within too terrifying. But the galleons of the merchant fleets plot a wandering course over the treetops, stopping at as many villages as they can to trade, pick-up or drop-off passengers, deliver letters and pass on news.

The ships are propelled by a combination of wind and magic, bound into the very timbers of their hulls. But getting to a particular location takes a great deal of skill and no small amount of luck. Flying ships' captains must know their trade and the overgrown rotting hulks of shipwrecks that litter the forests are a constant reminder of the fate that awaits those who do not! 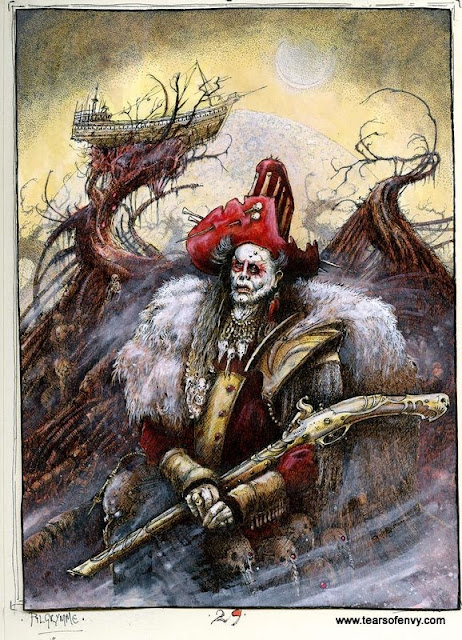 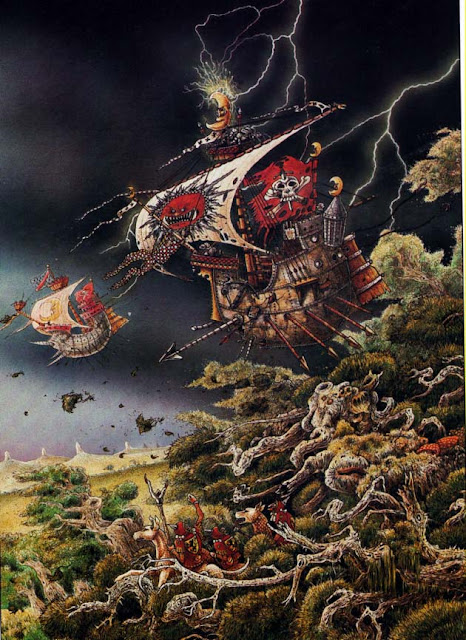 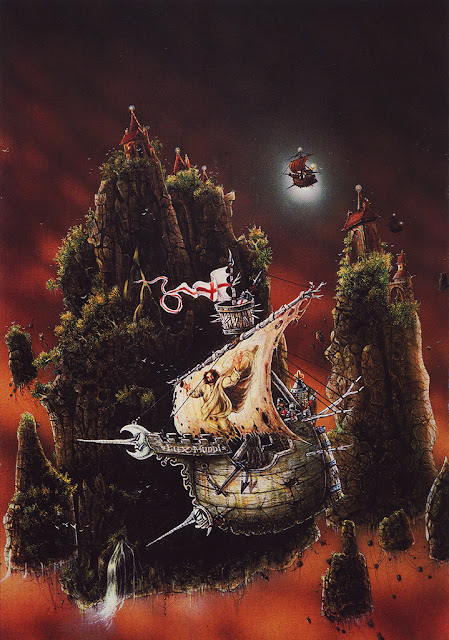 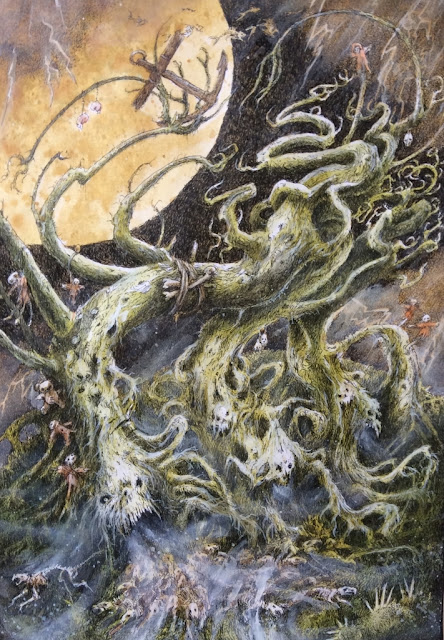 The Voodoo Forest project by John Blanche is clearly the main inspiration for this setting, along with these (older) paintings that feel like they come from the same world. The endless malignant forests, flying pirate ships, floating islands and malevolent beasties seem to be a perfect fit for Dark Age of Sigmar games.

I always treated the village of Wortbad (the name I gave my "haunted village" scenery set) and The Harrowmark, the region of Shyish containing Wortbad, as separate components from my Pirate Orruks and their adventures in the Mortal Realms. The pirates occasionally fought battles in Wortbad but before now I have never treated them as "locals" of Shyish.

I now feel like they are all elements of a single coherent setting - adding flying ships to my pirate fleet, and rocky hills and floating islands to my scenery collection are both now going to become a priority for me!
Posted by WarbossKurgan (Saul) at 15:37 No comments:

Elatine Jast, Witch Hunter and leader of the Realmgate Wardens of Wortbad, in Shyish, and her second in command, Anderton Fenn.

The Realmgate Wardens patrol The Harrowmark, in Shyish, checking the Realmgates for corruption and scouting for signs of Chaos incursions. They are investigators and observers, not frontline combat troops and it isn't their job to fight off anything they find, but to escape (fighting their way out if needed) and report the problems so they can be dealt with properly.