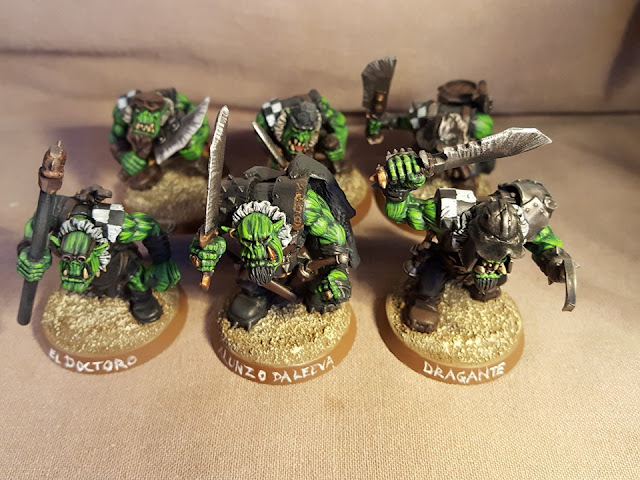 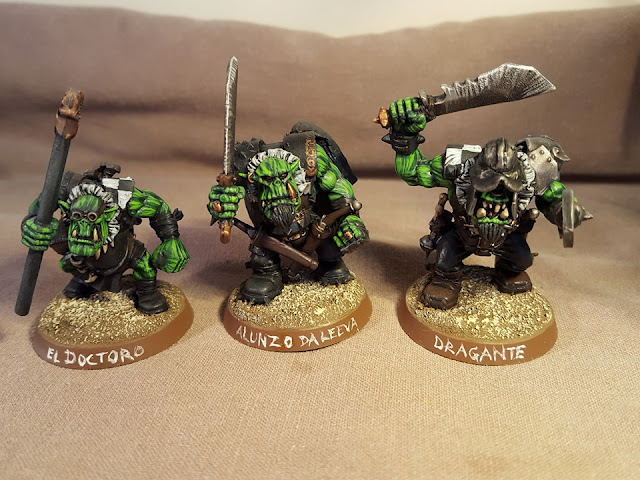 The Isla de los Corsarios in Chamon was home to a culture much like Estallia in the World-That-Was. The flying island had three major cities and was ruled by three feuding noble houses of the Castilians.

The pinnacle-city of Ras Kebdaha, on the east coast of the island, was re-built by Arabicans in the style of their own cities in Hysh: domed spires and ornate archways, whitewashed walls and gilt-and-turquoise decoration.

When the forces of Chaos defeated and slayed the population, Arabicans and Castilians alike, the island was left empty and in ruins for centuries. The forces of Destruction eventually followed the Arabicans from Hysh and occupied the island. In the city of Ras Kebdaha, the orruks and ogors took on the habits and customs of the Arabicans in a mockery of their sophisticated civilisation. In Port d’Addia and Port Mahóne they adopted the Castilian style.

Kapitán Alunzo da Leeva - Orruk Warboss
A dashing and heroic Orc Pirate; young, capable and unusually quick witted. He started his career on the Almagorka Coast and both he and his crew have acquired many strange local habits and mannerisms. He wears looted black clothes and black & gold enamelled armour, with a “white” ruff collar, a pair of heavy pistols, and a long coat draped over his shoulders as a cloak. He is popular with his crew as he has got them out of many scrapes over the years but unpopular with the other captains of the Ironfang Fleet who see him as an “upstart young pup”. He is unfortunately prone to shipwreck much more often than his actual skill as a commander should be. 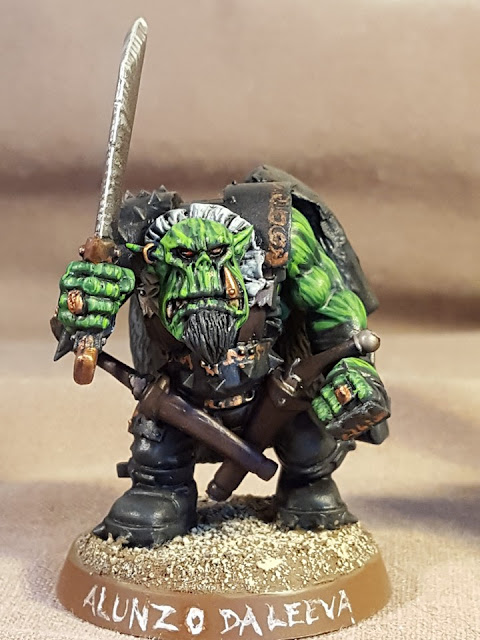 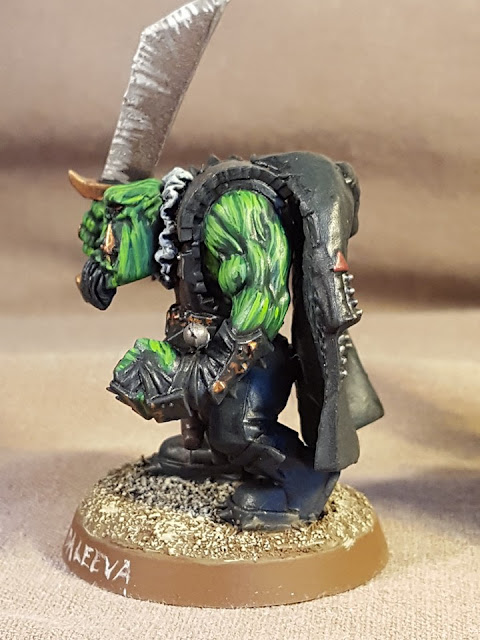 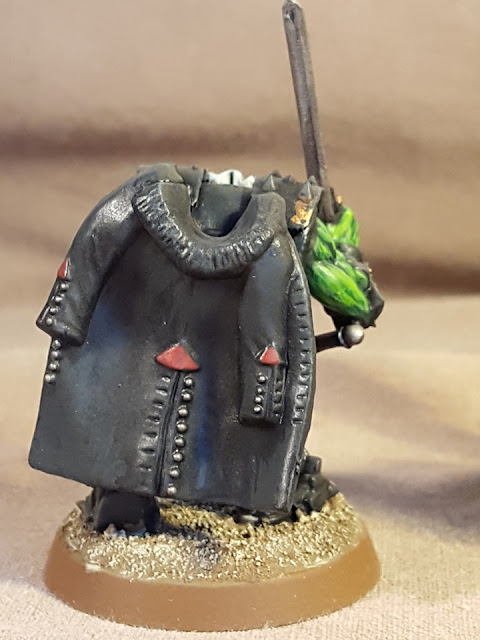 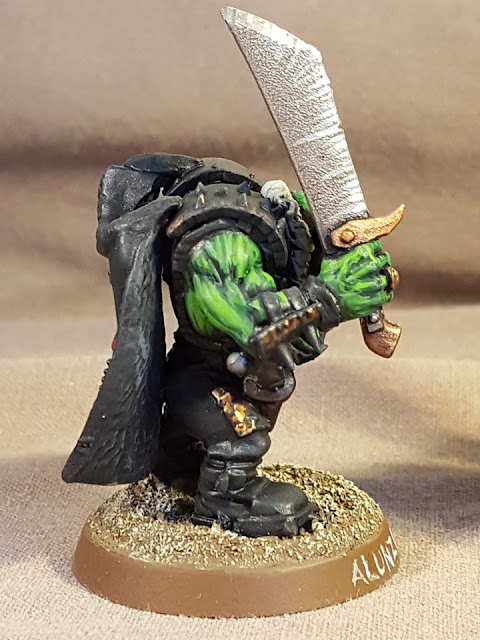 El Doctoro - Orruk Great Shaman
Surgeon, explorer, secret agent, collector, scientist: El Doctoro is none of these but he occasionally drops hints that there is more to him than just “the shaman”. He wants the crew of the Rotmoon to think he is mysterious and complex.

The Rotmoons may call themselves Privateers, and act more like Pirates, but they spend more of their time acting like explorers than either! They search the ruins of the Realms for treasures and artefacts from the Age of Myth. El Doctoro, considers himself an expert on that long-forgotten era and often pronounces, with great complacency and authority, what a found treasure was or its magical powers. He is occasionally correct but only occasionally. 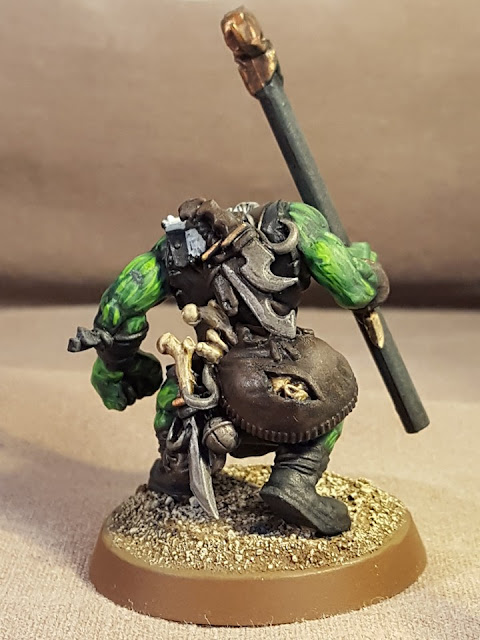 Dragante - Orruk Boss
A hulking brute of an orruk who makes sure the Boyz do exactly what they are told and bashes heads together when the crews’ arguments (inevitably) turn into fights. 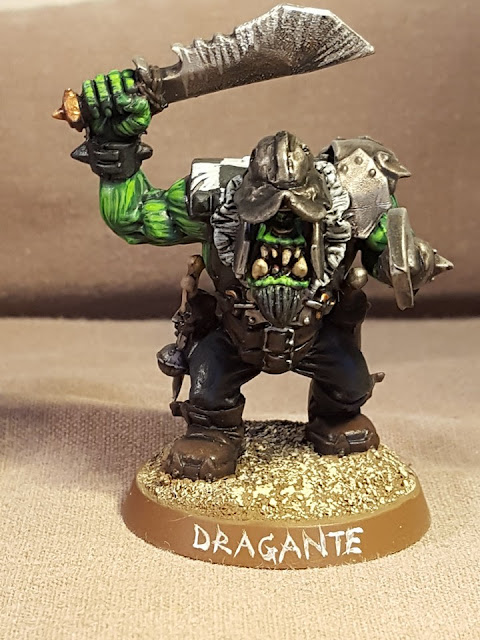 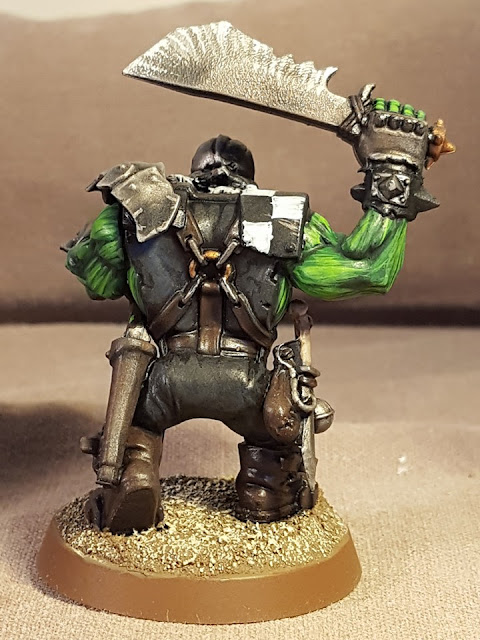 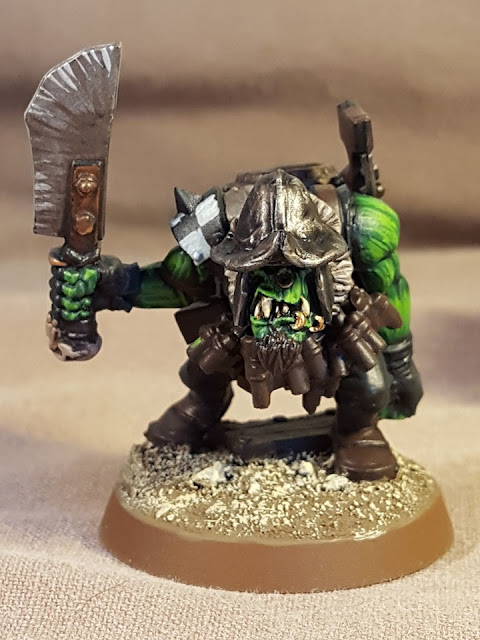 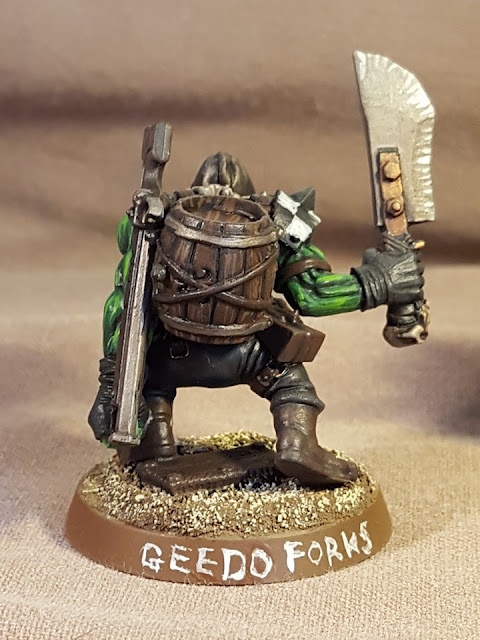 Percy Percy
The famous discoverer of that precious substance known as 'Green'. 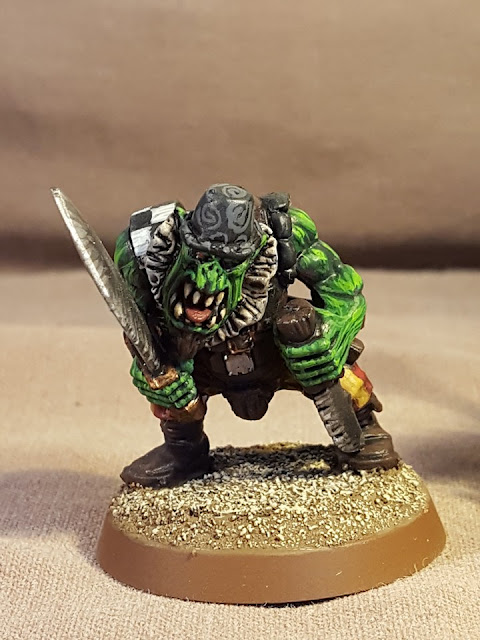 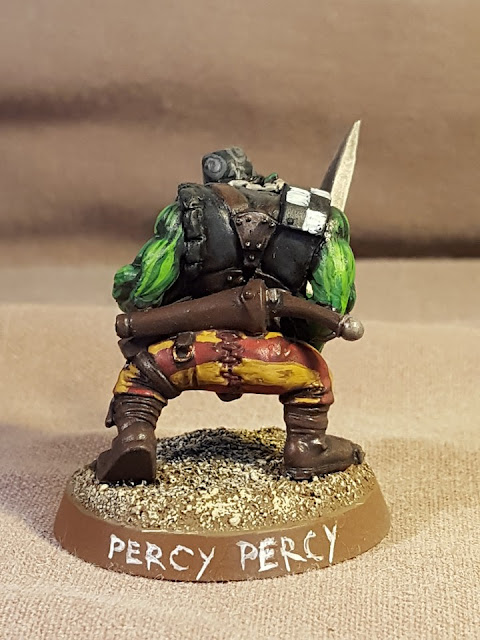 Bold Rikk
Distracted by his search for the biggest turnip ever known. 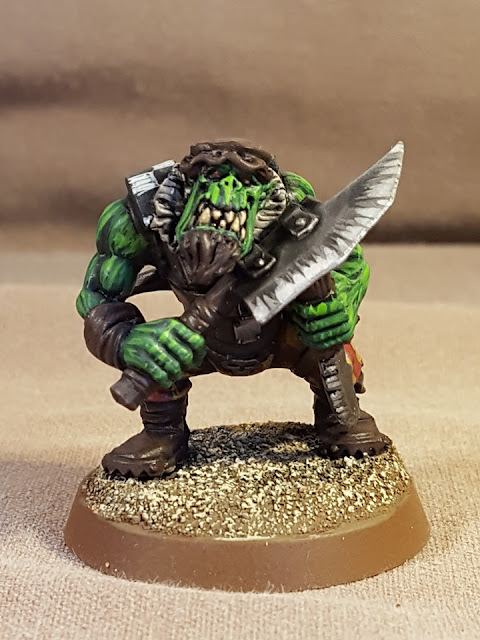 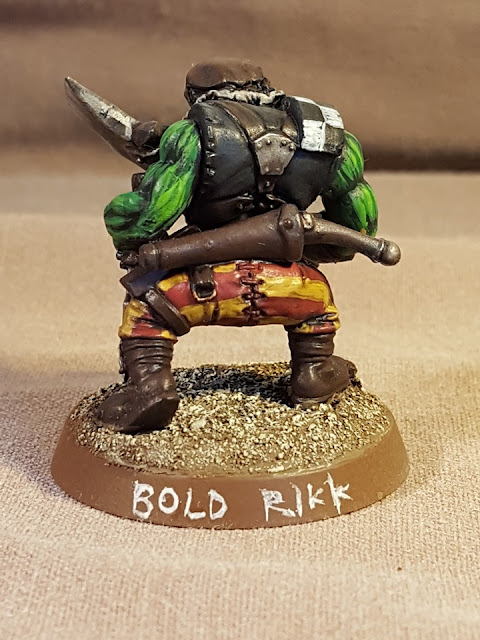 Posted by WarbossKurgan (Saul) at 09:36 No comments:

The "Four Pounders" have joined the Ironfang Fleet to add their considerable firepower to the line of battle!

Posted by WarbossKurgan (Saul) at 14:23 No comments:

The Cleavermaws and the Church of Sigmar’s Retribution battle one last time in the finale of the Duskhaven campaign!

The Cleavermaws started with half their strength in reserve and needed to keep Kaptain Mogrum alive as only he could call the reserves into the battle through the Realmgate in the centre of the board.

The Church had a third more models in total and all of them started on-table!

The Cleavermaws Boyz charged the Flagellants but the orruks were decimated trying to hold off the massive numbers of fanatical of churchmen.

The Kaptain got to the Realmgate and was about to call in the other half of his crew...

But a volley of Militia shooting, followed by the charge of the Gryph-hounds and the Ogor brought down the Kaptain and ended the game.

The Cleavermaws lost ending the Duskhaven campaign in a stalemate but both sides will be back, to try to get the upper hand, later.
Posted by WarbossKurgan (Saul) at 11:12 No comments:

Adm'rul Kurgan Grimjaw and the Ironfang Pirate Fleet don't all come from one Realm so they don't like to be tied down to any location and always have one eye on the horizon in search of the next drink/loot/fight. The fleet is often scattered around the oceans and seas of the Mortal Realms. They have used Blackwater, in Ghur, as a base of operations and meeting point for many years (and if you believe the old Adm'rul, he says he was Pirate Prince for a while). Before that they also used an uncharted island chain known as Hell's Teef, somewhere in the Sea of Serpents.

Adm'rul Kurgan is a veteran of a hundred campaigns in every corner of the Realms: from the steaming jungles of Ghyran to the ruined cities of the Hysh; he has burned ports along the Rotwater Blight, raided the islands of Okkam’s Reach in Ulgu, besieged fortresses in the Endless Desert, endured the perpetual snowstorms and barren wastes of the Silverglades in Chamon, battled on the rivers in the heart of the Jade Kingdoms, looted the Baneskull Islands of Shyish and engaged all manner of foes on land and sea. All the while stealing anything that wasn't nailed down, and having a go with a claw-hammer at anything that was. He and Da Ironfangs are always ready to run away from whatever the world throws at them!

Finally, a scale shot with the "Warboss" version of Adm'rul Kurgan!

Posted by WarbossKurgan (Saul) at 09:57 No comments:

The two mobs of Boyz stormed the ruins - the Starboard Watch attached the Ogor Maneater while the Port Watch attacked the Flagellants. Lost Uzzog sent Arcane Bolts over their heads at the Ogor.

The malevolent spirits that inhabited the ruins reined their furry onto the Orruks, saving little for the Church’s men.

The Flagellants smashed the Cleavermaws Port Watch, then pulled back, rallied and charged! The Boyz fled or died. The Ogor just held against the combined assault of Mr Sludga and the Starboard Watch.

Kaptain Mogrum was charged by Witch Hunter Captain Pieter Von Toorn, in a bid to take out the pirate orruks’ leadership. The captains dueled briefly but neither could get the better of the other.

The Ogor died but it was too little, too late - the Cleavermaws had spent their strength on their initial attack and it had cost them dearly: the fight was over in the blink of an eye and the Witch Hunters threw them back!

Major Victory to the Church of Sigmar’s Retribution

Over 80% of the Orruks were killed or had run and the Church had lost less than 25% of their number.
Posted by WarbossKurgan (Saul) at 14:40 No comments: