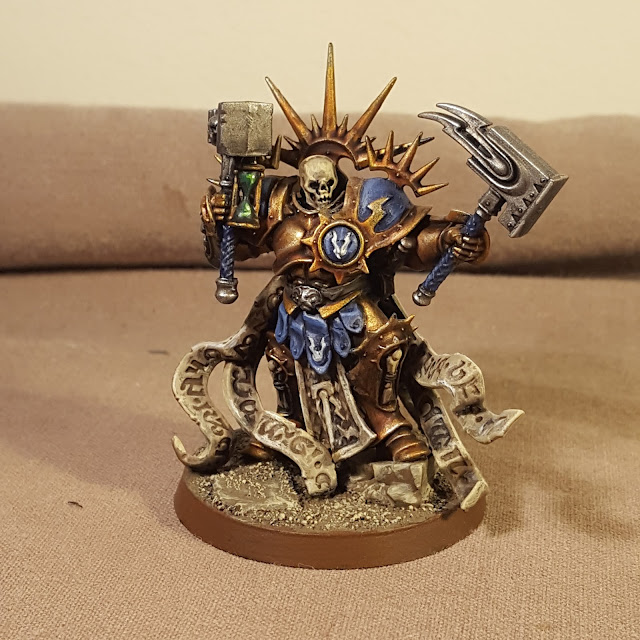 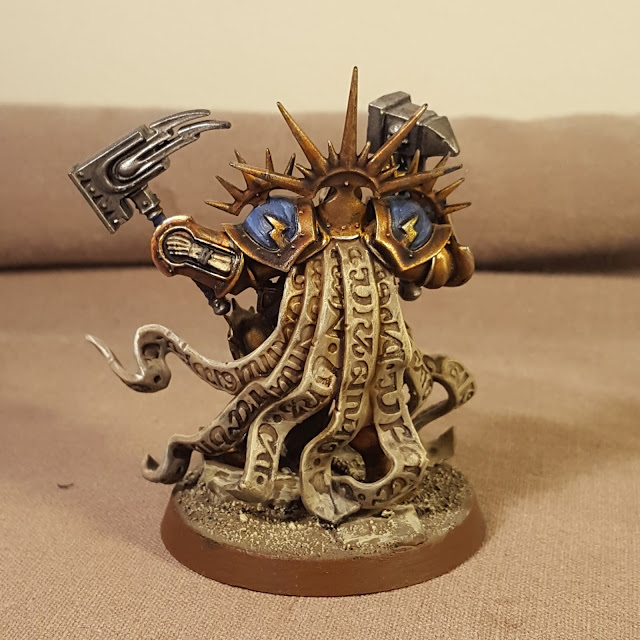 I never really liked the coffin-on-a-stick so here's my Lord-Relictor for Silver Tower (and smaller scale AoS games), now with 2 hammers!


I considered a different option before I settled on the 2nd hammer, I nearly went with an empty hand, but the pose seemed off:

So I made a hammer using (from the Warhammer Chapel OoP scenery kit) and part of the staff from the relic, cut down with the base of the staff moved up to the new base.

Posted by WarbossKurgan (Saul) at 15:25 No comments:

With his last breath, the vile Necromancer cursed the interlopers. Only the enemy leaders’ heads will lift the curse.

The Orruk Witch Hunters fortified the abandoned Deathwatch Manor - they planned to make camp for a few days; they boarded up the windows and doors using broken furniture and torn-up floorboards. They chalked symbols of warding and protection from the undead on door and window frames. They drew lots and took turns to stand lookout on the roof of the house, and they spent a few hours looting the house for supplies. They filled all the bottles they found with well water and Grimming blessed them in the name of Sigmork to make bottles of “Holy Water”), and carved stakes from table and chair legs.

They melted-down a handful of silver coins to cast bullets and silver-tipped crossbow bolts. They then ate and drank anything that was still even slightly palatable and settled down to sleep under their coats and cloaks. The Waaagh Priest also wrote out fresh scrolls of protection which they attached to their gear with wax seals.

When the roof-top sentry spotted movement in the Forest of Tears early the next day the Orruk Witch Hunters tumbled out of the Manor house to meet the Church of Sigmar’s Retribution once more!

The Church of Sigmar’s Retribution advanced toward Deathwatch Manor.

The early morning mists swirled around them as the Nachtjägers reached the graveyard. The moans of Deadwalkers just behind them startled them but the Professor turned to face the new foe.

Battle-lines rapidly changed as the Orruk Witch Hunters used the Spirit Gate to make a hazardous journey. They appeared close to the War Priest's flank and surprised him with their audacity!

Fängmorder cut down Avram and threw himself into the Deadwalkers that stumbled across the pumpkin field.

The Brotherhood arrived at the pumpkin field before Fängmorder had dealt with the Dead there.

War Priest Lothar was cut off from his followers and watched helplessly as they were cut down, one after another. He fought his way clear and fled, swearing that his losses would be avenged!
Posted by WarbossKurgan (Saul) at 14:03 No comments:

The Skinny-men are one of the dominant gangs in Mancunius Dome, mostly active in the Sump Crawl area, they are on fairly good terms with the Gothermogs and the Sumptreaders but have a bitter rivalry with the Slipgibbets.

Posted by WarbossKurgan (Saul) at 10:00 No comments:

More models to join Abraham Moss in The Skinny-men of House Van Saar.

Bowker Vale, a Heavy with a Plasma Gun

(Since I took these photos I have cleaned up the mold-lines and burs - especially that nasty one on the Plasma Gun!)
Posted by WarbossKurgan (Saul) at 09:58 2 comments:

The Watch: Konrat and Bogen

The bodyguards of the Archeotech Prospectors group - the wilds of Mancunius Dome are not at all safe, after all. They think of themselves as Skitarii but they are far from it. They are just local thugs in gas-masks who have been hired by Tyloc Heften Haug with the promise of first-pick of any advanced weaponry the Prospectors find. They had a small amount of technical ability when they were first recruited and this has increased by working alongside the more skilled members of the group, but they are still just the hired guns really.

Posted by WarbossKurgan (Saul) at 10:58 No comments:

The Ogresuns are joined by a small bunch of Pirate Grots!

Posted by WarbossKurgan (Saul) at 11:08 No comments: