The Dead Shall Bar the Way

Karol the Cuirassier was sent by Kalyustar to find the Witch Hunter, Pieter van Toorn. The mission took longer than expected but it was a success, and the pair raced to the Soulbridge, a Realmgate near Leechminster, to get back to Kalyustar in Wortbad.

But there was a someone waiting for van Toorn...

Hagel Rotshroud cackled to himself and hobbled through the forest that had overgrown a dozen graveyards and tombs, making the area an arboreal necropolis. He attendants followed him without comment or reaction. The man was old and stooped but seemed happy in his work.

Hagel stopped at the edge of a clearing and looked about himself. He sighed, cackled again, then motioned to one of his followers. The Deadwalker shuffled toward him and turned to allow Hagel access to its bag, from where he pulled a half-dozen large candles.

The necromancer set the candles on a nearby tomb and lit them one by one, then he waved over another Deadwalker which handed him a large book it had been carrying. Hagel carefully opened the heavy book at a marked page.

The old man read in silence for a few minutes. His attendants stood motionless and silent. The Hagel cleared his throat, raised his hand in a suitably dramatic pose, and was about to start performing a ritual when a noise behind him distracted him.

Someone was talking, and not far away! Two people even. A conversation! 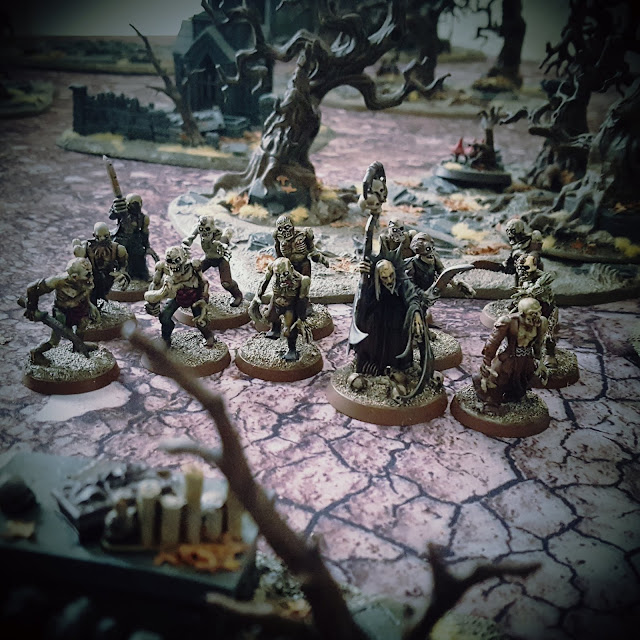 Hagel Rotshroud was stunned. No one ever came here! He hurried toward the sound and hid behind a mausoleum. 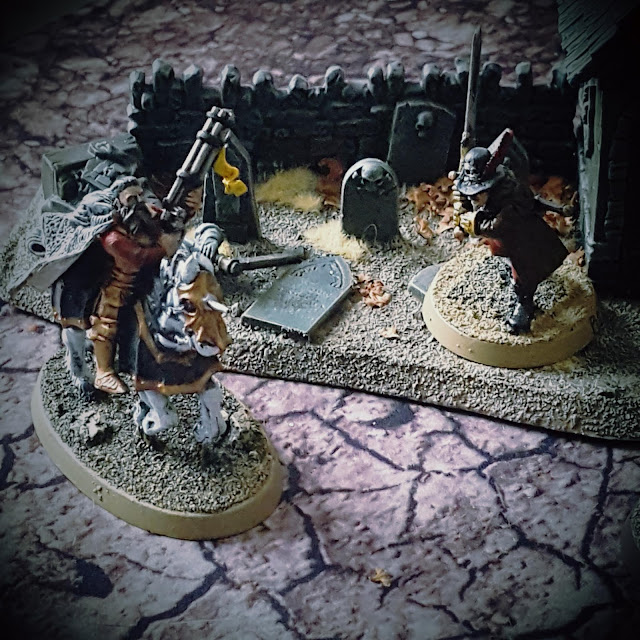 Karol and Pieter van Toorn realised that a dark shadow had passed over the forest and drew their swords and pistols. 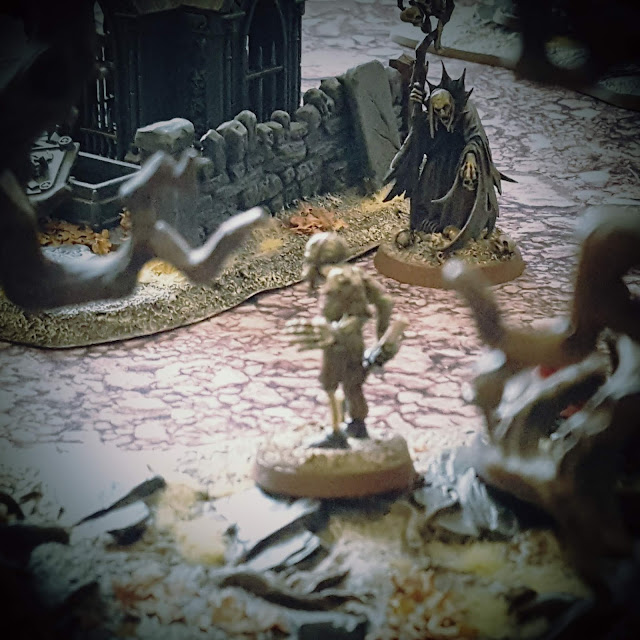 Hagel leered at the pair round the corner of the tomb then darted back out of sight. He waved a hand at his hurd of Deadwalkers and they started shambling forward toward the interlopers. 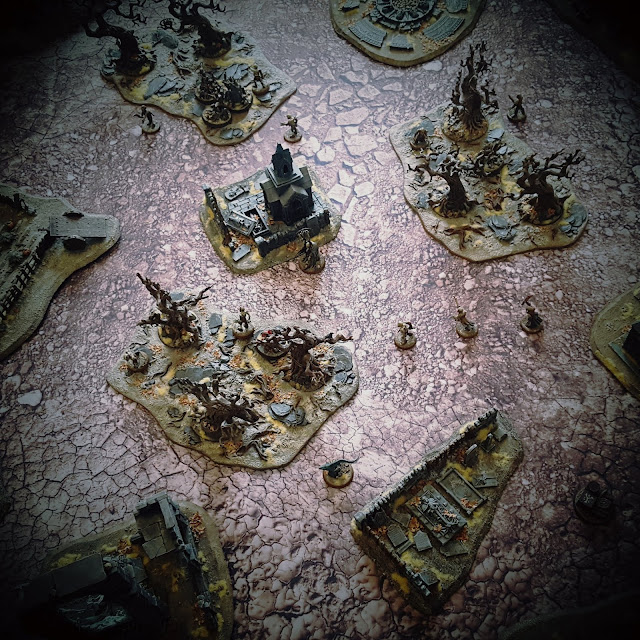 With another arcane gesture he brought forth the power of Shyish and more Deadwalkers joined his little band, shambling out of the woods and from open crypts and tombs. 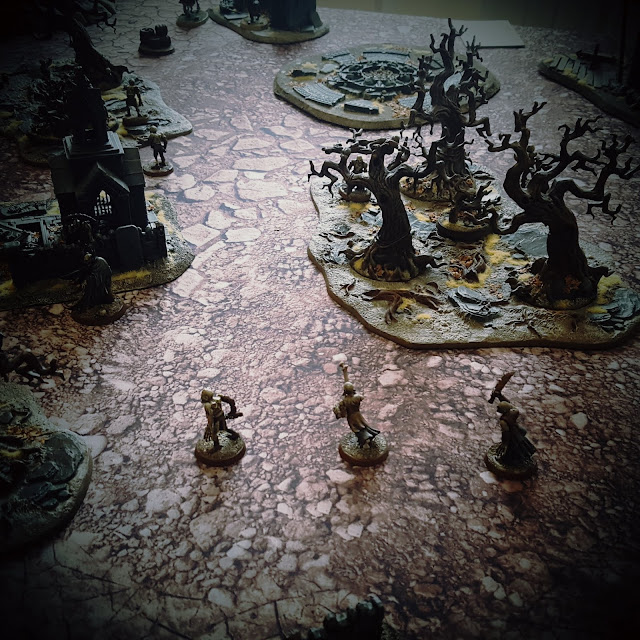 The Witch Hunter and Cuirassier heard the creak of mausoleum gates opening from within and reacted swiftly. Pistol shots rang out in the silent twilight. 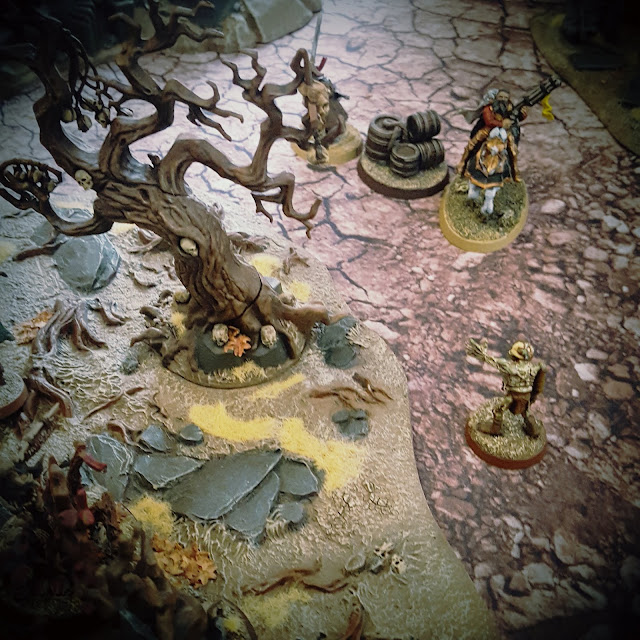 The head of a deadwalker exploded as a blessed silver bullet ripped through it! 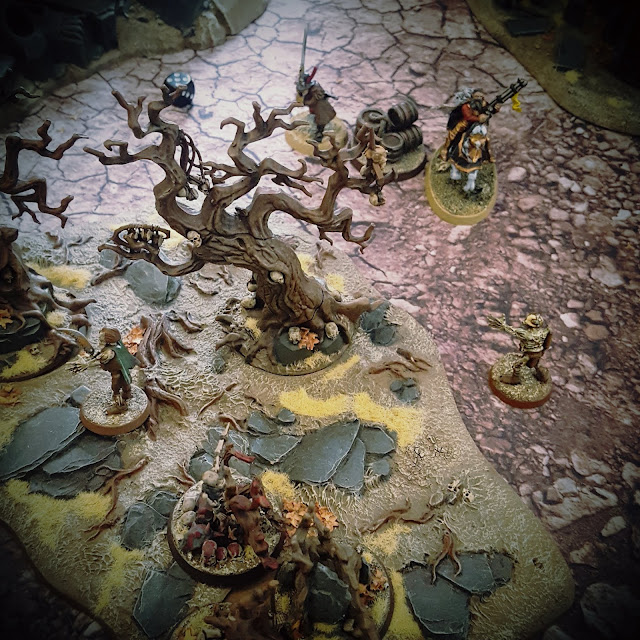 Karol and Pieter both charged into a lone Deadwalker and crushed it... 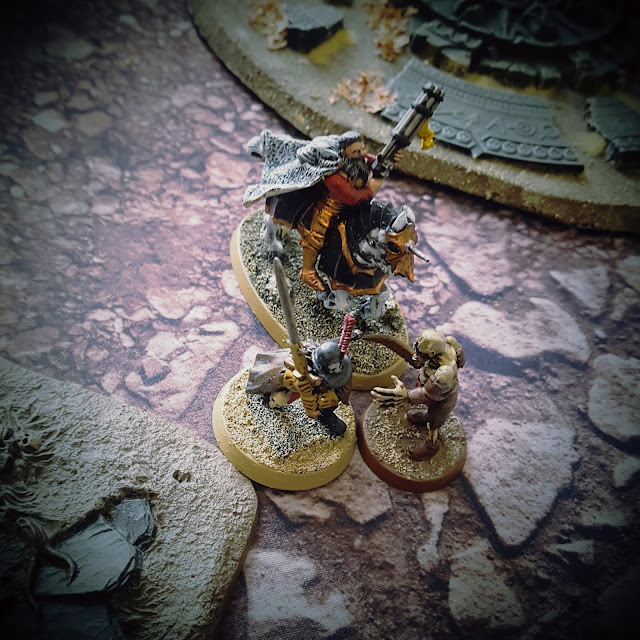 But more appeared in the following moments they were swarmed and nearly overwhelmed. 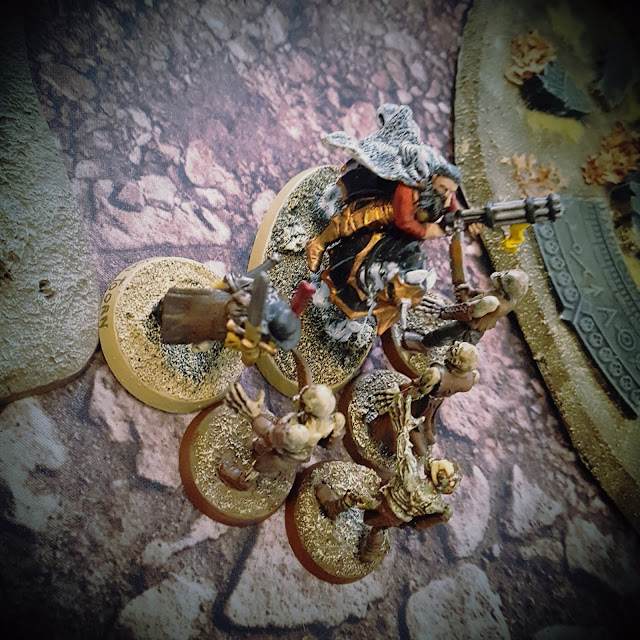 They pushed through the crush of dead clawing fingers. Pieter's greatsword smashed through three 'walkers in a single deadly swipe. Karol broke away and galloped through a copse of trees. 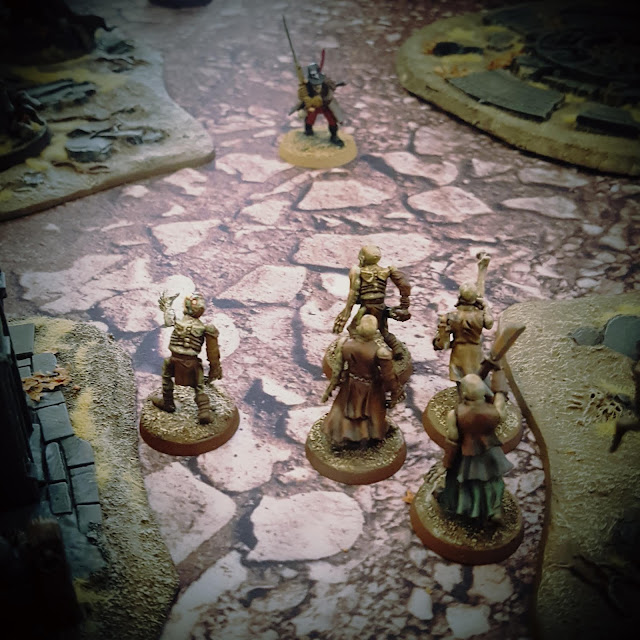 More Deadwalkers came to Hagel's summons, and more still. The necromancer cackled to himself again. Surrounding himself in an amethyst aura of protection. 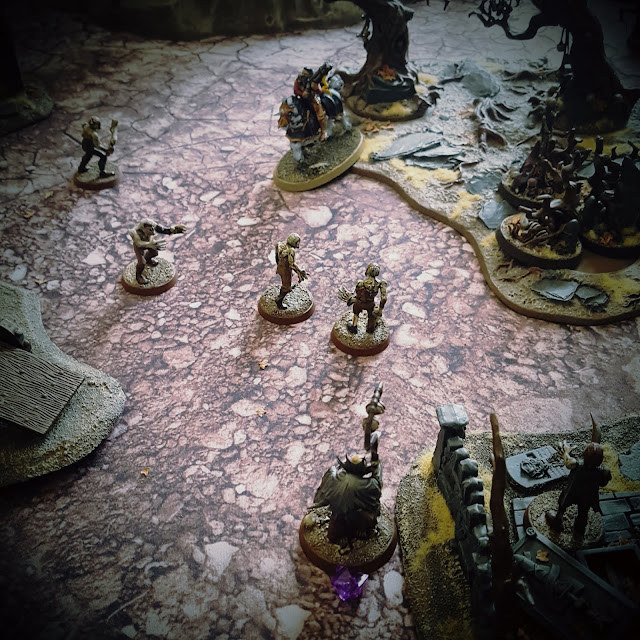 With several of his Deadwalkers grabbing at Pieter's clothing and gear, holding the Witch Hunter in their deathly grip, the necromancer turned his full attention on Karol. 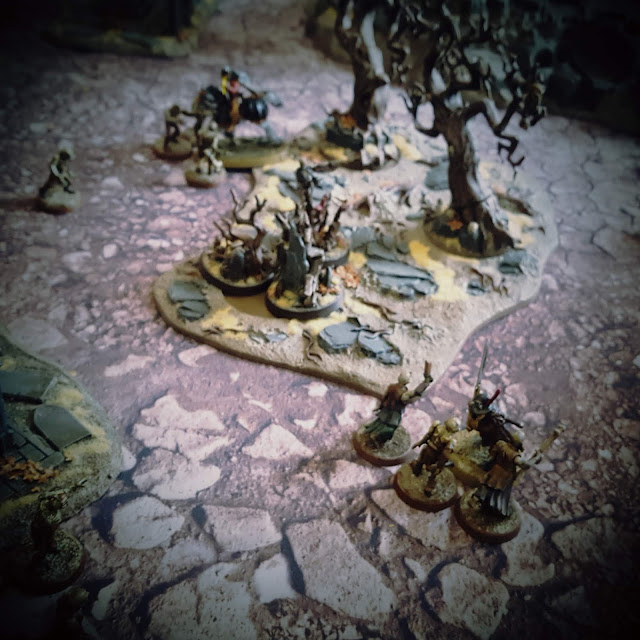 Deadwalker after Deadwalker shambled toward the rider, clawing at his legs and his terrified horse. 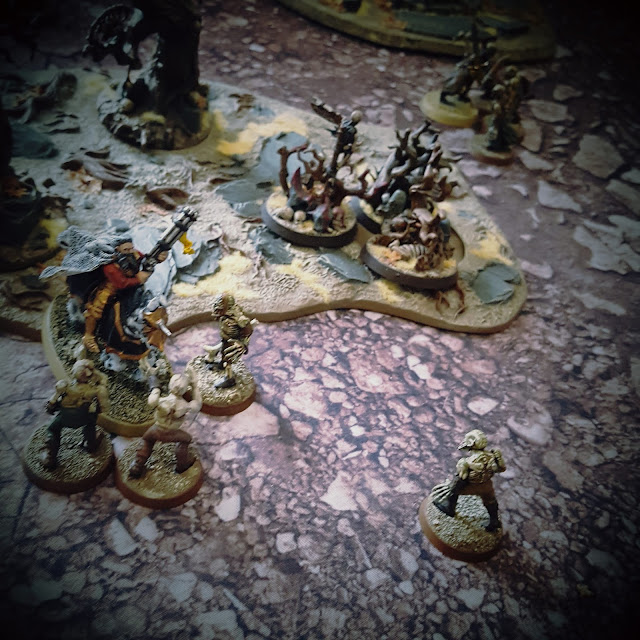 Hagel advanced on the rider. 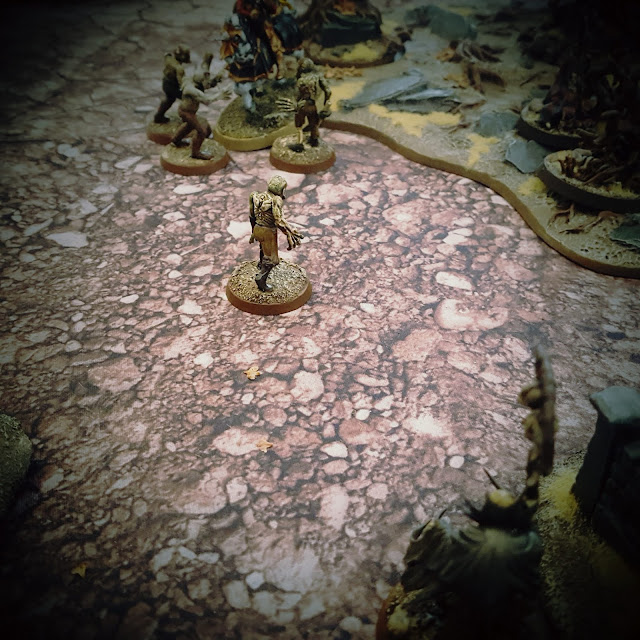 Pieter dealt with most of the 'walkers but one was more tenacious! 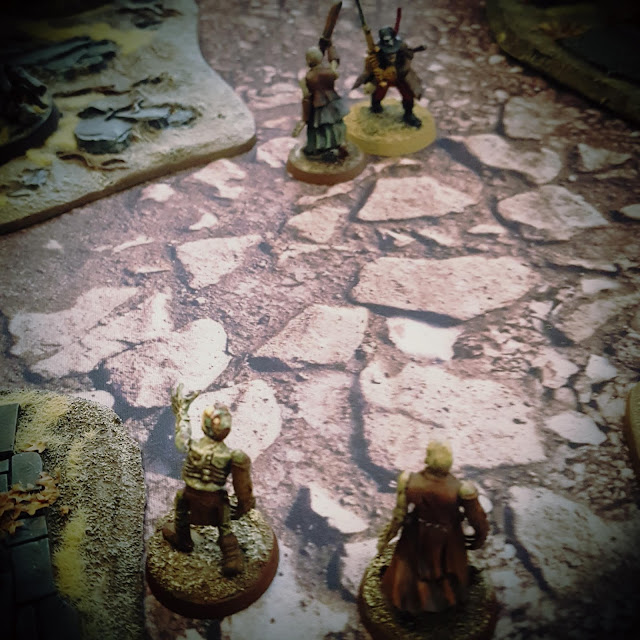 The necromancer exerted his will on the Deadwalkers and they pulled Karol down. 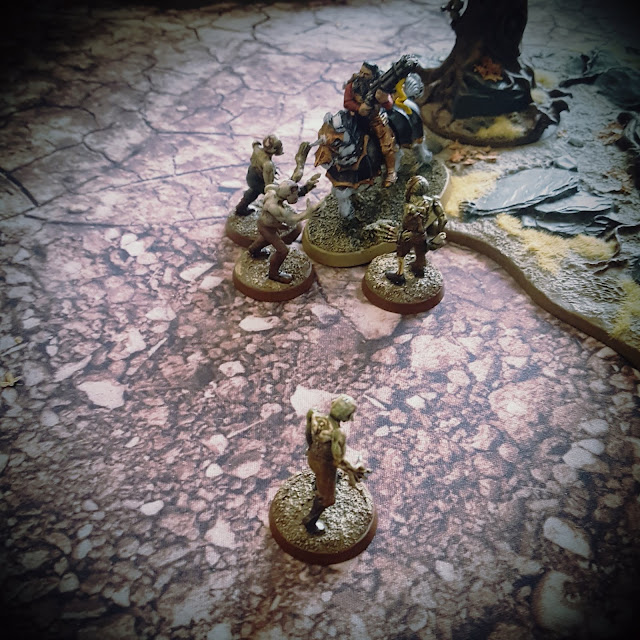 Seeing his moment the old man charged, amethyst energies crackling round the skulls hung on his staff. 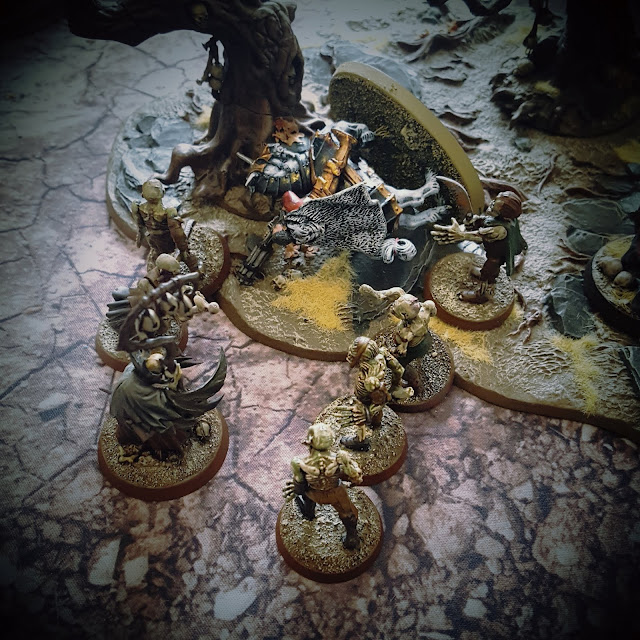 Karol succumbed to the assault but Pieter was able to free himself from the Deadwalker's grip and run for the Realmgate! 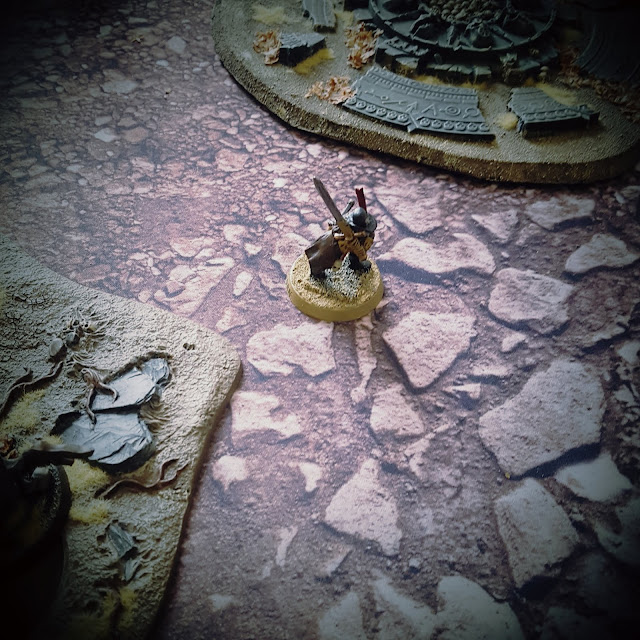 The was a spur-of-the-moment narrative game, played because David and Rob could not make today's planned 4-player game.

We wanted to tell the story of what happened when the Currassier, sent to find Pieter van Toorn, found the Witch Hunter (a chain of events triggered in an earlier game but not yet fully explored), so we played fast and loose with the normal AoS Skirmish rules. I had control of an NPC warband with double the Renown of Viktor's chosen two models. I was allowed to replace D3 Deadwalkers per turn (but I could not exceed the starting 12 models). I was also able to add another Deadwalker to that total by spending a Prophecy Point and using The Dead Walk the Earth (from The Bloodied Skull - also not normally allowed in Skirmish!)
Posted by WarbossKurgan (Saul) at 08:05