Kastorax crouched in the shadow of a large rocky outcrop and watched the distant colossus crawl along the canyon floor. The giant walking machine lumbered along in a cloud of orange dust. At this distance no sound reached Katorax but the Techwitch knew its thunderous footsteps would be shaking the ground beneath the colossus. His augmented eyes whirred and clicked as he zoomed out and adjusted the focus, and brought a wider field of vision into view. A swarm of smaller vehicles accompanied the colossus, a mismatched collection of smaller walkers, grav and wheeled bikes, a tracked crawler and a wheeled truck.

As he watched a group of them peeled off from the colossus. Muzzle-flashes flickered from the lead elements and Kastorax followed the direct of fire and saw what they were shooting at: a pack of junk-skimmers raced over the nearest ridge! The convoy’s defenders outnumbered them three-to-one but the junk-skimmers powered toward them at full speed.

One of the wheeled bikes disappeared in a sphere of white light and Kastorax jumped: he knew suddenly why the junk-skimmers were so confident in their attack. They had an archeotech weapon! A second wheeled bike was immolated, then a third and a grav bike made four. The rest of the pack scattered and fled back to the colossus.

A cloud of black smoke and a stab of fire from the walking hulk was followed a few seconds later by a thump and a deep rumbling boom. The colossus had fired its main cannon. The kinetic round smashed a junk-skimmer to bouncing fragments but the other skimmers kept coming. They probably knew they had a minute or two before the cannon would be ready to fire again. A white sphere of light formed on the colossus’s front left leg and the monstrous machine pitched over at a precarious angle. A second white flash enveloped the cannon turret and a bloom of dirty yellow fire erupted as the magazine exploded. The colossus was ended.

Kastorax was gone from his shady lookout. He hurried back to the rest of his warband and their vehicle with uncharacteristic energy, born of excitement and greed. He wanted one of those archeotech energy weapons more than anything he could ever remember wanting! 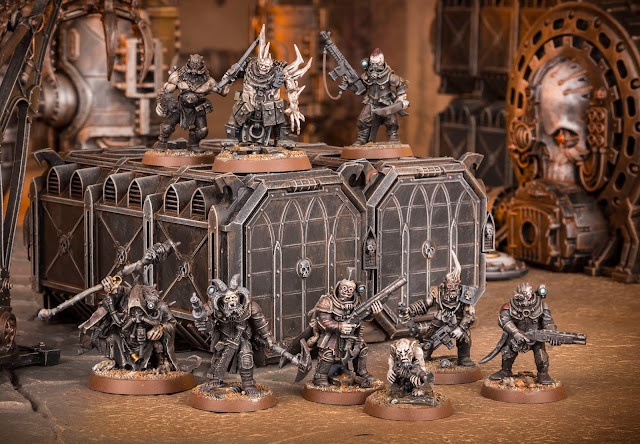 We are planning a Necromunda campaign, set in the rust-coloured deserts of Tor Megiddo, as a follow-up for the "event game" that took place in Helsinki last year (and is now featuring in White Dwarf in a series of 3 or 4 Blanchitsu articles). The campaign is called "Oil and Blood" and should start in about a month or two.

I plan to tie in the background to the Rhossum Secundus event game that is happening in Warhammer World this weekend. I know it is set on a different planet, but in my "headcanon" it is the same world as Tor Megiddo, though maybe on a different continent, as it seems to fit the spirit of that world perfectly. As I understand it, it's a kind of spiritual sequel: John Blanche liked Tor Megiddo and wanted to try a "big machines" themed game with a very similar feel. So he invited a group of like-minded gamers to each create a "colossus" and its crew. Details like choices of colour schemes and the style of the Techno-Barbarian gangs that have appeared for this game feel like the next evolution of the theme. From my point of view it feels like it is fleshing out the world a little more. Opening out the horizons to reveal a lot of possibilities for story-telling games within the Tor Megiddo setting.

So the Slipgibbets will actually get to see some action on the tabletop! I still regret not posting them to Helsinki so they could have featured in the background of the Tor Megiddo game, as NPCs or even inactive bystanders. And on that topic, I have started making some non-combatants for Tor Megiddo - some mutant merchants and traders to hang around the shanty towns of False Hope and Malady. 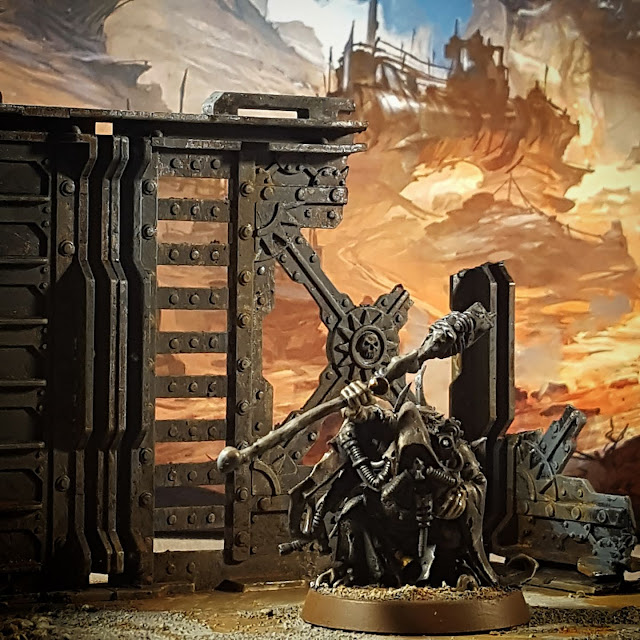