Commorragh, the Dark City, is the massive city-state within the Eldar Webway that is the primary home of the Dark Eldar, or Drukhari, race. It is said to be impossible for outsiders to find, and anarchy and terrorism are a well-established way of life for its debased inhabitants. It is widely believed to be hidden deep within the inter-dimensional labyrinth known as the Webway, described by the Eldar as a "dark stain" growing within their holy pathways.

Commorragh is no mere metropolis, for it is to the greatest cities of realspace as a soaring mountain is to a mound of termites. Its dimensions would be considered impossible if they could be read by conventional means, its population greater than that of whole star systems. If anything, Commorragh is more like a vast collection of satellite realms and cities linked by myriad portals and hidden pathways.

Viewed from one perspective, Commorragh is a loose collection of far-flung nodes spread throughout the arteries of the Webway like a malevolent virus. Its clustered concentrations are in reality scattered across the galaxy, thousands of light-years apart in places. Yet these locations are linked together by shimmering dimensional shortcuts. Within the Webway, the immense distances between each sub-realm can be crossed with a single step.

The Dark City is known to have "wandering shadows that tear apart the unwary" and is bathed in the crimson half-light of the Ilmaea, or "black suns," dying stars taken from realspace by the Aeldari at the height of their technological prowess and installed within their own sub-realms within the Webway to provide Commorragh with light and power.

Wailslake suggested a new Inq28 / Xenos28 project to our group and it has really captured my imagination. He really likes the idea of INQ28 games but he wants to try something that doesn't have the Imperium and humanity as the setting. He suggested creating a campaign based around the same sort of scale of game but with Aeldari factions fighting in Commorragh.

I immediately loved the idea of cut-throat Drukhari cult warfare and intrigue in the murky depths of the Dark City. It's a real change of pace for me, a long way from Orruks! (Though it is still definitely well within my comfort zone as far as haunted cities go!) I fear he has unleashed a great terror onto my hobby plans though as this project will need some very exciting scenery! 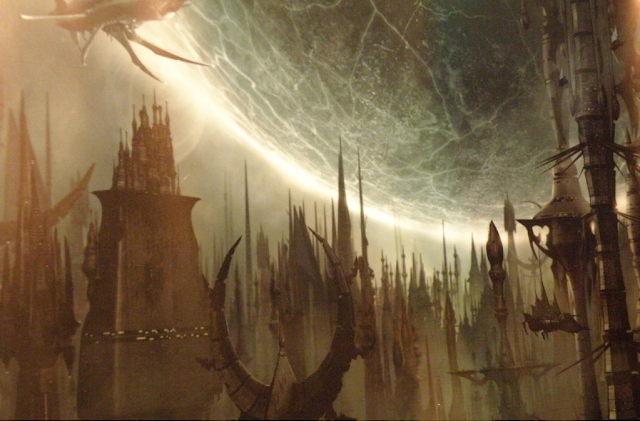 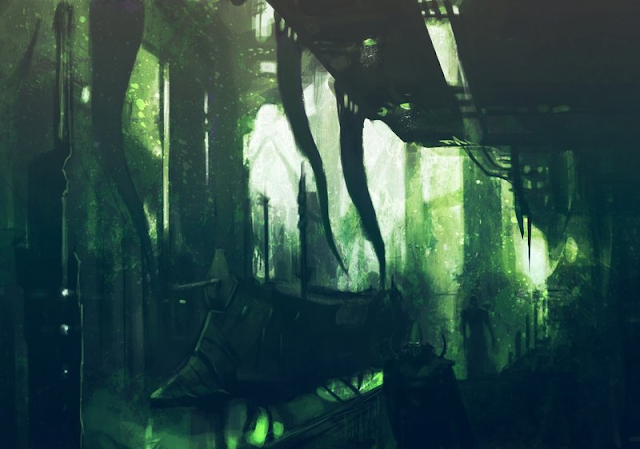 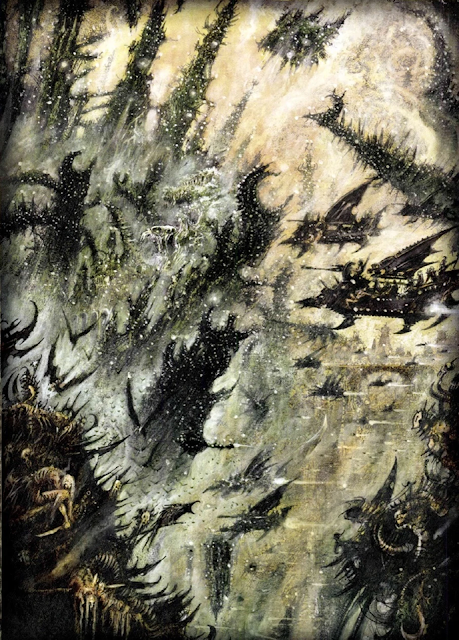 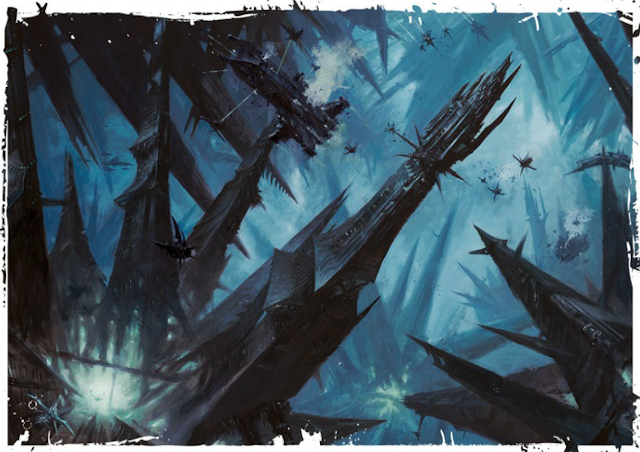 I have no solid idea of exactly how I'm going to make suitable scenery for this, but I want to make a dark and foreboding board with lots of different levels, and plenty of ruins and signs of decay. I want it to have a dark green-sh palette and include the trademark Drukhari curved blades and elongated pyramids. I don't want it to injure players while we use it but "razor sharp" seems to be the by-word for Drukhari design!

Around the titanic central spires of the Dark City are the trading districts of the old Eldar empire. The lowliest of ports was once an architectural masterpiece millennia ago, but the ravages of civil war have not been kind. Low Commorragh now consists of a mixture of shattered ruins and scavenged former glories. Numerous dilapidated fortress complexes and barter-ports now spread out in every direction. The lesser Kabals riddle the extremities of the angular black spires with opportunistic growth. The labyrinthine depths of the outer zones are so congested that a traveller could travel for months on end without so much as a glimpse of a stolen sun. Many areas that have been twisted beyond recognition by the tremendous upheaval of the Fall are haunted by scavengers and spectres. Within the pitch-black catacombs of Low Commorragh there lurks far larger and uglier creatures than the Dark Eldar, for they are prowled by the lost, and the feral thrive there.

One could not possibly visit all the outer districts of Low Commorragh in a single lifetime, for they are many and varied. Attempting to catalogue them would prove fatal, for the Dark Eldar are highly territorial and tend to kill intruders on sight. One such outer district is Hidden Blade, a crucially placed Kabalite stronghold that sticks out between Port Carmine and Nightsound Ghulen. Port Carmine is second only in violent reputation to the Port of Lost Souls, the largest port of the Dark City that is the principle spaceport from which slaves are brought into Commorragh and raiding parties despatched to bring further captives. Port Carmine is a violent realm, suffering from constant gang warfare between rival Kabals. The immensely tall spires of the starport sprout outward for miles, each host to a fleet of ornate spacecraft. Port Carmine's central docks play host to the spectacle of two major Kabalite fleets at full anchor, the Slashed Eye Kabal and the bloodthirsty Stolen Conscience, locked in a never-ending struggle for dominance. Around Port Carmine lay the war-torn ruins known as the Sprawls. Their bleak streets play host to the Parched, cadaverous Dark Eldar that have fallen from grace and wound up on the fringes of their violent society. These wretches are drawn ravenously to a battle whenever one breaks out, vicariously experiencing the acts of extreme violence and drinking in the bloody spectacle to rejuvenate their wasted bodies. Occasionally they will drag an unfortunate soul who has been fatally wounded into the dark alleyways, where the Parched will fight one another over the scraps of the departing soul.

The Sprawls eventually give way to a network of atriums and chambers through which flow the toxic acid-green waterway known as the River Khaïdes. This polluted waterway winds around and through the outer districts of central Corespur, shrouded in subterranean darkness and wreathed in mist. Above the toxic surface of the foul river drift thin grav-craft bedecked in faded grandeur. The sorry hosts of these craft earn what little they can by hooking corpses from the Khaïdes and selling them as slave-food. These corpse-fishers often fall prey to Jetbikes and sky-chariots which streak through the air above the river at dizzying velocity, slashing apart the unfortunate victims in merciless contests of speed.

The mercenary district of Sec Maegra is found further coreward, and is more popularly known as Null City; a nation-sized shanty town permanently riven by civil war. The permanent smell of cordite hangs over the roofs of the shanties, and every few minutes fresh screams pierce the silence. The scorched streets resound with solid-shot gunfire and the crack-spit of Splinter Rifles at night, as negotiations and assassinations turn out badly. It is said that occasionally xenos mercenaries can be found stalking the streets of Null City. It is even rumoured that from time to time the most vicious of their number are called upon to serve the Kabals.

I'm going to base my band around a Wych Cult. I will be including a few non-Wyches but I think starting with them as the core will give me a strong theme.

This is the kind of painterly style and colour palette that I want to aim for: 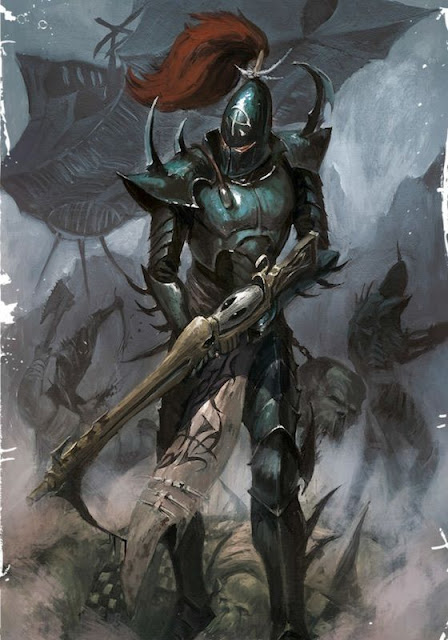 I plan to get the Dark Elf Blood Bowl team as soon as they are available. With head and hand swaps I think they will make excellent citizens of Low Commorragh. 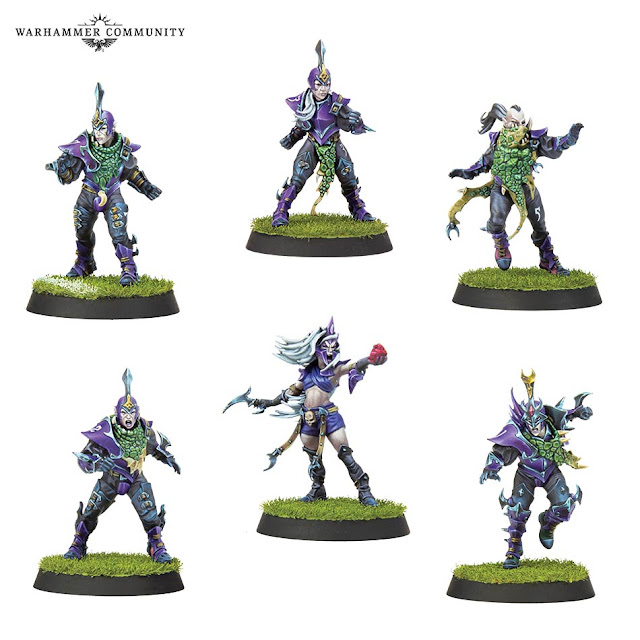 I was not able to stop thinking about it so I went through my bits boxes and collected everything vaguely elven. I had a few Drukhari parts given to me in a job-lot of spares and left-overs when a good friend had a clear-out.

Using Wildwood Ranger bodies and Wych arms and heads I have made a couple of test kit-bashes of Commorragh denizens. I'm quite pleased with how calm and stately they look - a nice contrast to most of the rest of the, very dynamic, Drukhari range I think. 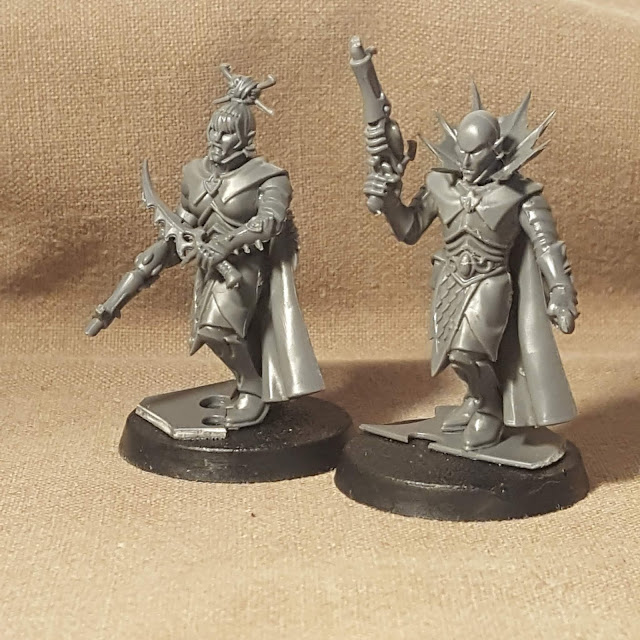 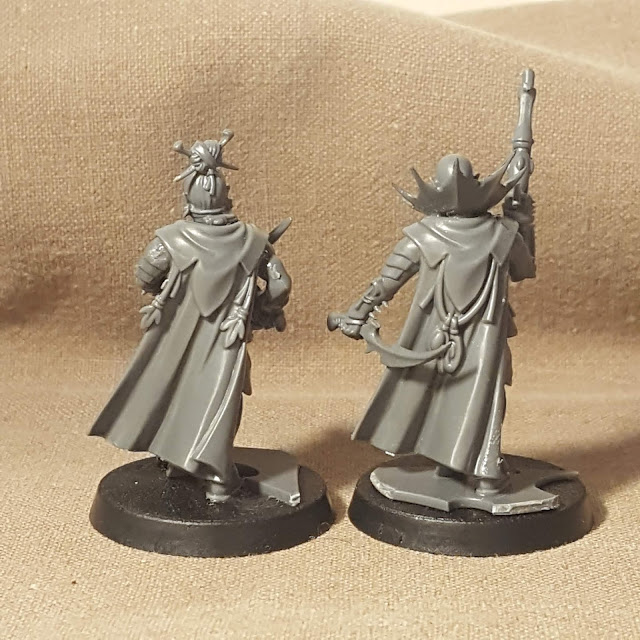 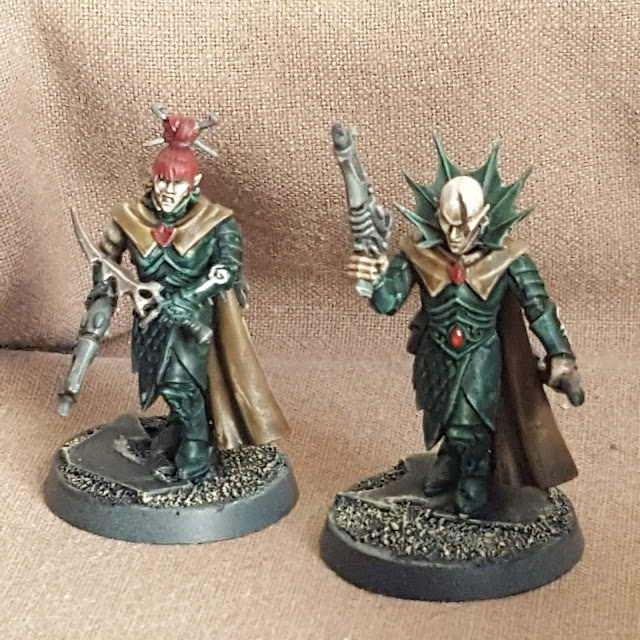 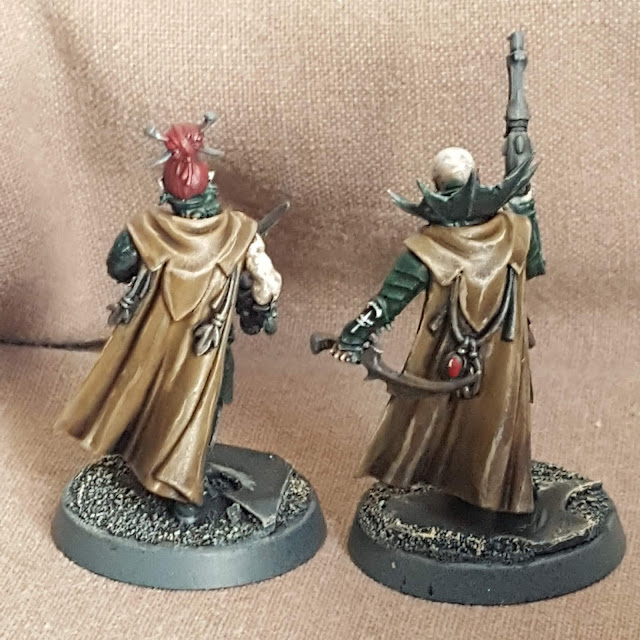 And I have started some additional things for the project:

I've printed a backdrop (using an image found on a "Commorragh" Google search). The Google searching also brought up a couple of cool ideas for quick and simple Drukhari objective markers that I have ruthlessly stolen.

I started making a small piece of scenery to use as a colour-test and as a "middle ground" between the backdrop and the minis when photographing them. It's a spikey column from the Temple of Skulls kit, the front of a wrecked Raider and a piece of the Ruins of Osgiliath (Lord of the Rings) scenery on an old movement tray. It's only undercoated at the moment - I plan on painting it in the dark green colour scheme described here.

I have also found my old "tin dome" Storm of Magic templates (not shown) and a Vortex Grenade template - they will make excellent Webway Portals for the campaign! 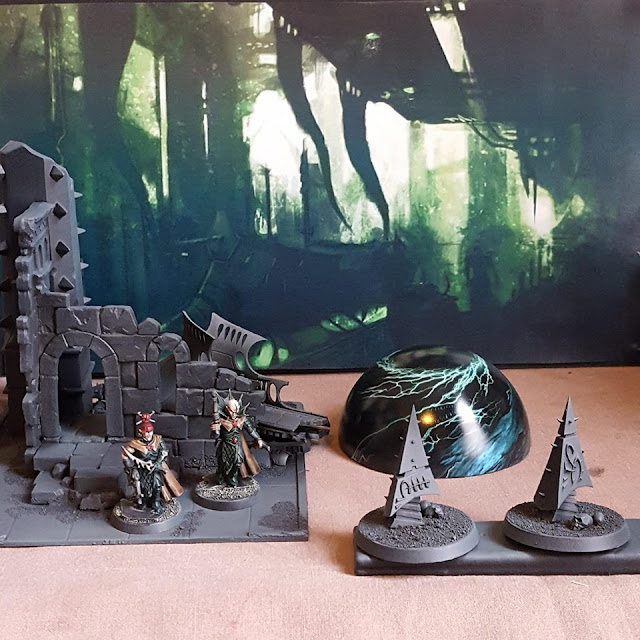 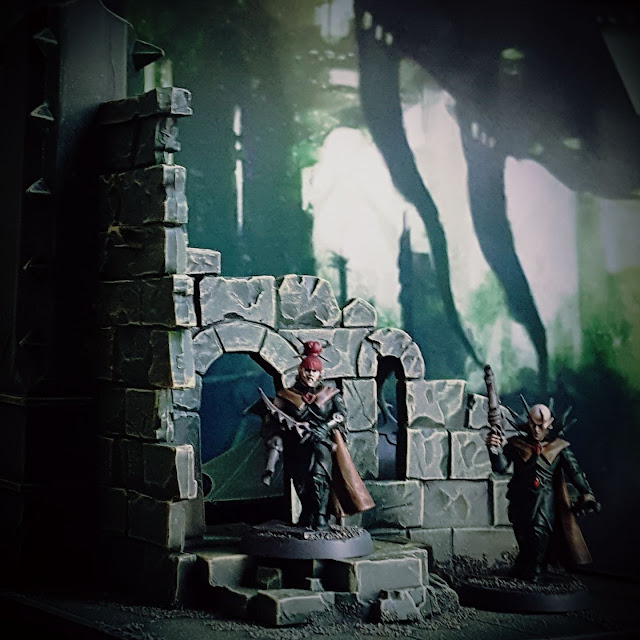