This week sees the start of Animosity II – The Burning Winter, a socially-distanced global narrative campaign. Beginning 22nd July it will run for five weeks from start to finish, with each week corresponding to a campaign turn. Before the start of each turn, Team Animosity will update the Unfolding Narrative, weaving the results of your Reports into a single ongoing story arc. This can include the daring feats of your generals, bloody battle sequences, and dramatic exchanges between characters.
Using the “Submit Report” page, players may choose to submit one report of each type per turn:
Animosity II is not a map campaign. Although there will be a map, it is for narrative purposes only. Instead, each turn, your Coalition will be faced with three diverging Narrative Paths. The more Battle Reports you put into each Narrative Path, the more likely it will be successful. Keep in mind, there will always be an enemy Coalition opposing you, meaning you’re going head-to-head with other players from the top of Turn 1.
You win (or lose) the campaign by how successfully your Coalition navigates the Unfolding Narrative. There is no clean, numerical scoring: players will need to read the narrative and make their best guess. Beyond the campaign narrative, there are a large number of player achievements we will recognise at the end of the campaign, too.
If you haven’t already seen the Theatrical Trailer, you need to stop reading this and go watch it right now.
Sound good? You’re darn right it does. Animosity Campaigns has sixteen years of worldwide online campaign experience under our belts. So, what are you waiting for? Join our Discord server! Meet the other players in your Coalition! Prefer to stay socially distant? That’s fine too! No matter what you do, this is the campaign for you!
█▀▀ ▜▟ ▆▉▆▟ ▀▀█

The Badfangs are Bonesplitterz orruks from the dry and windswept Uzmorgarg plains in the wilds of Aqshy. The tribe has an oral tradition, myths and legends that have long been told and retold, passed down through the years, of their time as travellers among the stars. They believe that in an age long ago they roamed the cosmos, they were not natives of Aqshy but they came from some other, unremembered Realm. They chased god-beasts across the void, riding in the belly of a creature they called the ur-whale, but they crashed into the Great Parch by accident while the ur-whale was battling another god-beast.
In some versions of the stories the ur-whale was killed by the other god-beast, in other versions the Bonesplitterz accidentally killed it from inside in an ill-considered attempt to get at the god-beast that was attacking it.
Whichever version they believe, they all agree that in the crash they lost their ability to travel the cosmos and they were stranded. They are not trying to return to those days by any means, but they carry with them a sense of adventure that continues the tradition of travelling, exploring and finding new monsters to defeat.
They have made their home, and found plenty of beasts to fight, in Aqshy and they usually return there after each foray into the wild. So, loaded up with the most potent and powerful of the magic bones his tribe has found, Wurrgog Prophet Hogrog Ug Weirdklaw has set out into the Realms, leading the Badfangs to hunt down the great beasts of the Realms.
He has been empowered by the revelation that language controls the essence of Gorkamorka, and the power of stories can be used to steer and focus the Waaagh! energy of his tribe. 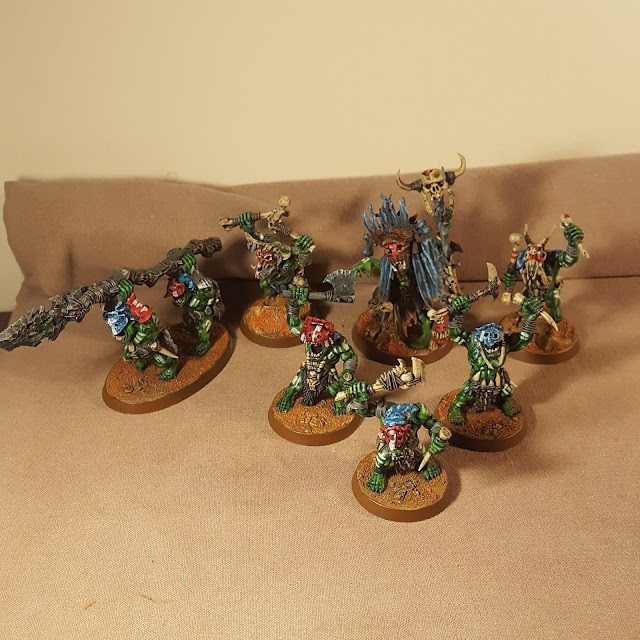 This is the Badfangs warband so far, but I'm expanding it for Warcry: