The Court of Spades, part 6

Sourshanks the Grail Pilgrim woke in the makeshift camp alongside his fellows as the bright morning daylight shone through the green forest canopy and dappled the pale canvas of his tent. / Sourshanks the Crypt Ghoul grunted to himself as he stirred in the fetid boneyard. Sickly moonlight glinted on the wet slate tiles of mausoleums and autumn leaves.

After taking breakfast and breaking camp they followed the trail of the Grail Knight they sought, singing chansons about his exploits as they went. / After picking the last of the rotting meat from broken bones scattered in the mud the pack of Crypt Ghouls crawled through the dank forest darkness, hissing and gurgling at one another angrily.

The pilgrims stopped regularly to take repast and swap anecdotes about the knight, seeking to outdo one another with tales of his deeds or boasting of a time when he supposedly spoke or gestured to them. / The Ghoul pack wandered aimlessly through the night. Stopping and starting at random and fighting occasionally over scraps.

If the knight should fall during his travels the pilgrims would make a grisly prize of the corpse, using it as the centrepiece of a sacred reliquary. Care of this reliquary was of paramount importance to the pilgrims and they bore it with great honour. / The Ghoul pack sometimes hoisted aloft the remains of one of their victims, tied to poles like a grisly banner. They briefly cared for these macabre reliquaries as if they held great importance and bore them solemnly for a few days, then cast them aside and forgot about them.

Lockdown landed just as we were in the middle of moving house so most of my hobby supplies (specifically my bits boxes and unbuilt kits!) are in storage and inaccessible for now. I have been pottering along with projects based on what I do have to hand and getting distracted (and frustrated) by planning projects that I cannot possibly work on (The Necrons in my head may never come to pass so they have taken up a disproportionate amount of time in there!).

So I have been looking at the things I have and while I am enjoying turning the Warcry starter scenery into something more suited to the Harrowmark, I needed something smaller to work on as a palate cleanser in between. I found a partial Crypt Ghoul sprue and the remains of a Coven Throne / Mortis Engine kit and the Court of Spades popped back into my thoughts.

It's been over two years since I last made anything for this warband, and the Ghouls have been sat in a box since then waiting for some ideas of what to do with them - I didn't want to make them as "men-at-arms". I fished them out when I got the Warcry cards for Flesh Eater Courts last year to round-out the warband, but I couldn't think of how to make them unique, so they went back in the box again.

Then the other night I had the idea to make them into FEC versions of Grail Pilgrims - who deludedly think themselves the devout followers of a holy cause. Hooded robes made of ragged, rotting cloth seemed like a relatively easy greenstuff make! So over the course of three evenings I assembled, based and greenstuffed the 7 Crypt Ghouls I have, and I have added the Warhammer Underworlds warband to my (ever growing) wish-list, with the intention of giving them similar robes when I can get hold of them. I also made them a reliquary as an objective marker.

I'll try to get some paint on them soon. 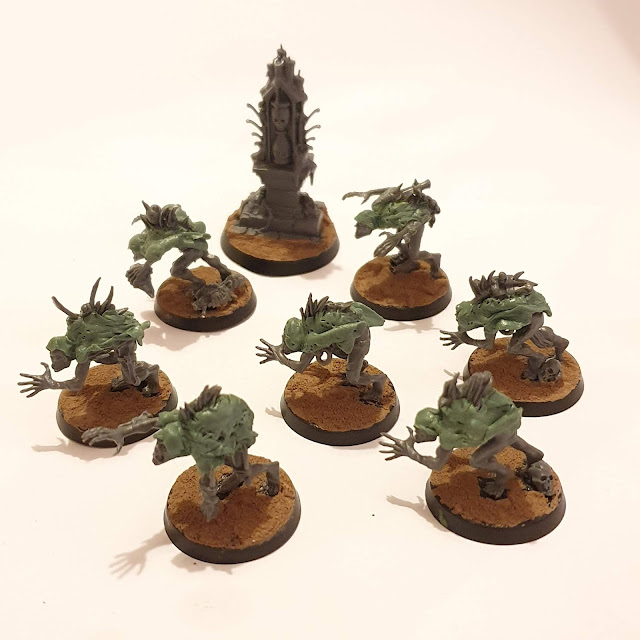 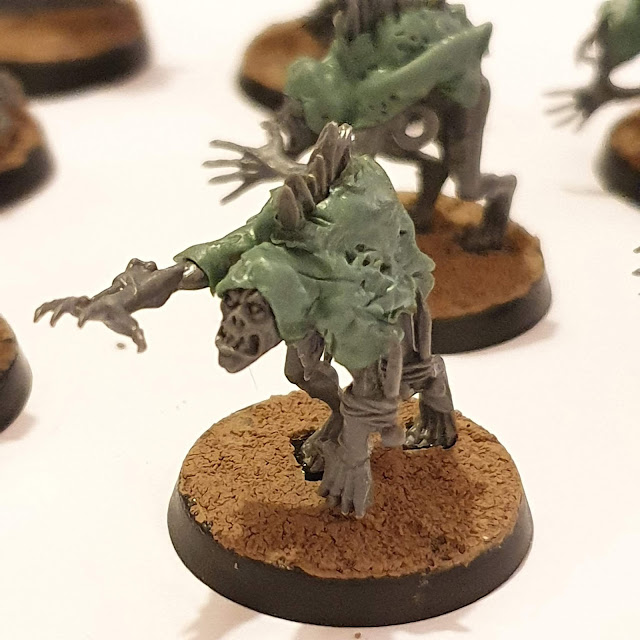 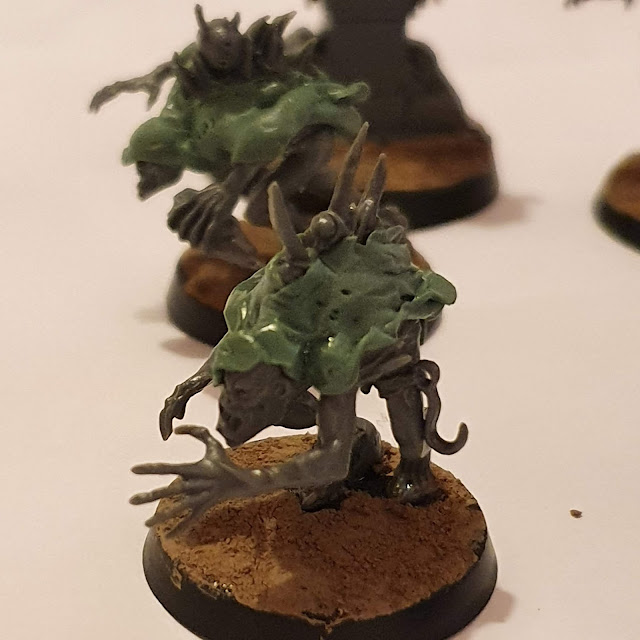 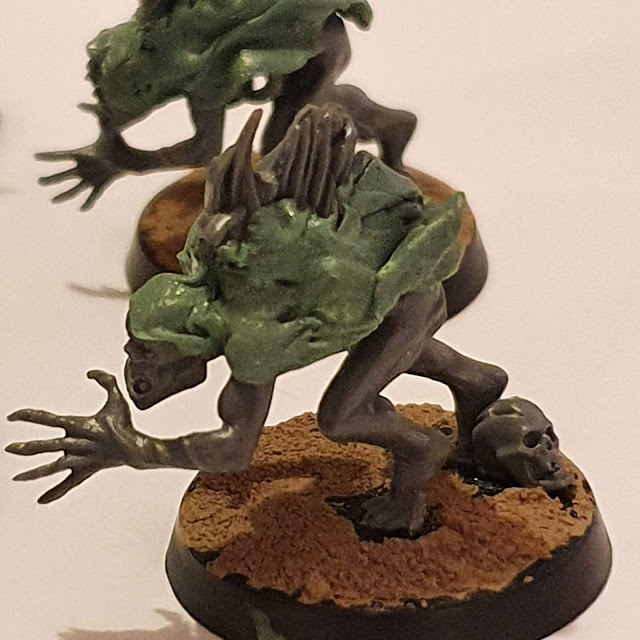 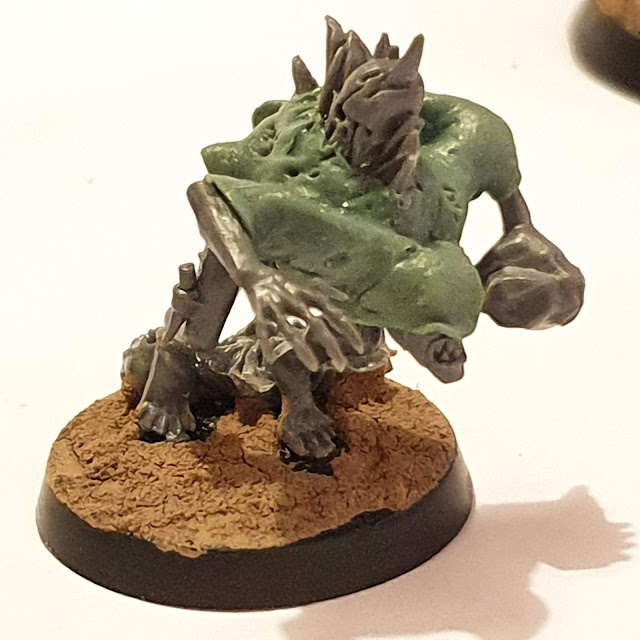 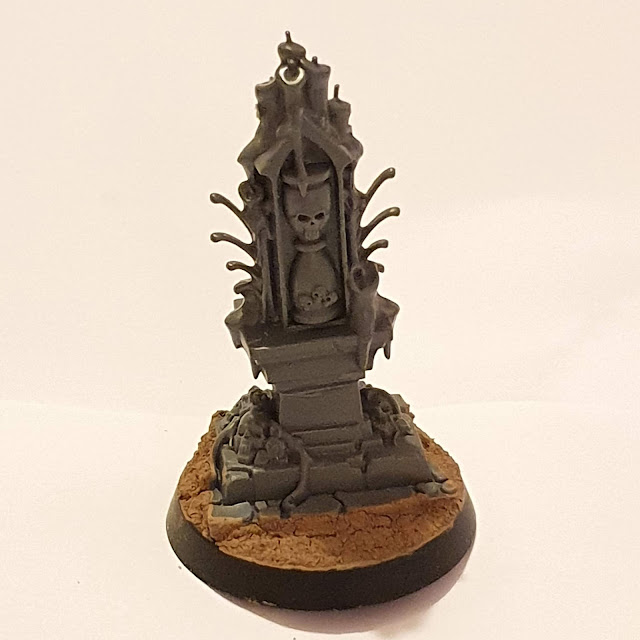