The depths of the Harrowmark forests are home to many strange and terrifying creatures. Horrors dwell beneath the dark bowers. Sharkan and his followers, the Wardens of the Cold Flame, are perfectly at home there. They dwell in a ruined castle that was built into the side of a mountain in aeons past. They are not lost in the delusions of the Flesheater Courts though. They don't see themselves as shining, honourable paladins. They are content to live in shadows and the dust and the rotting finery.

Vollak, The Traitor Knight.
Vollak betrayed his people as soon as he own well-being was threatened. He opened the gates he was supposed to be guarding and allowed an army of the dead to slaughter the population of a city in exchange for eternal life. 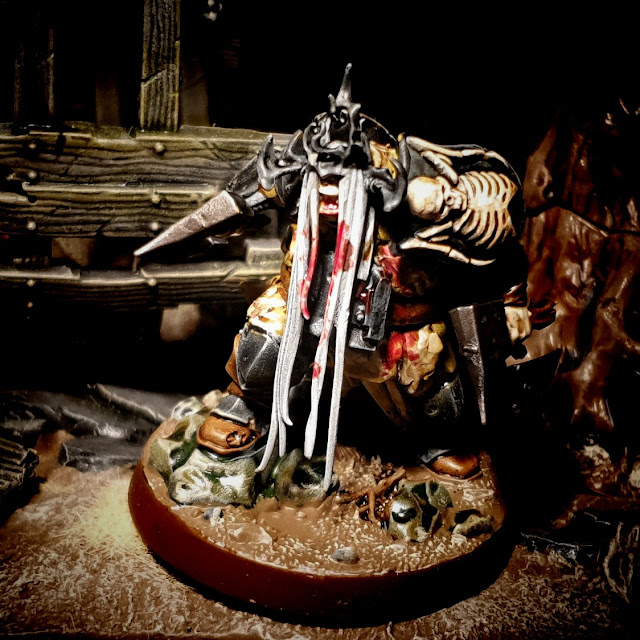 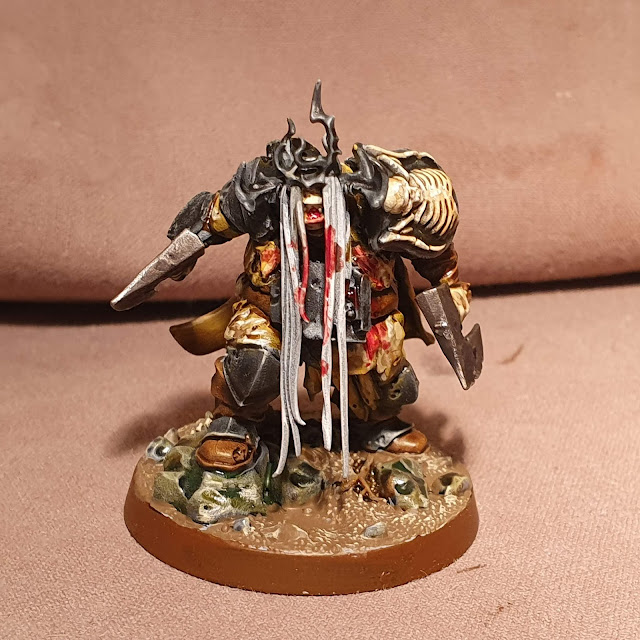 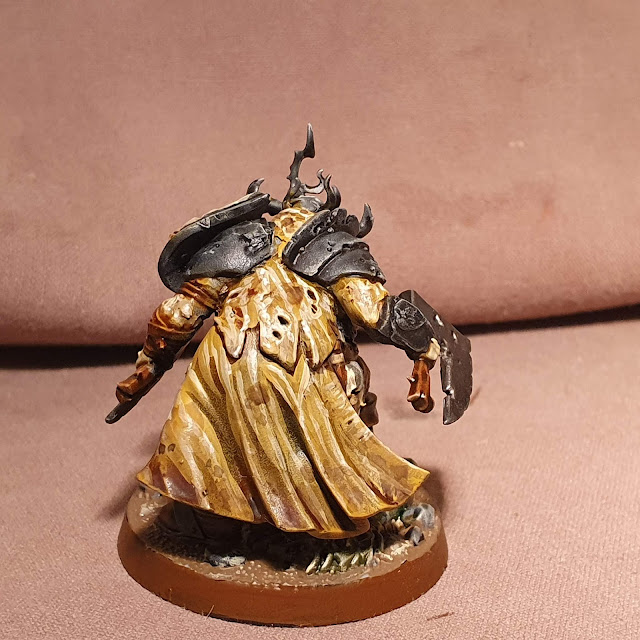 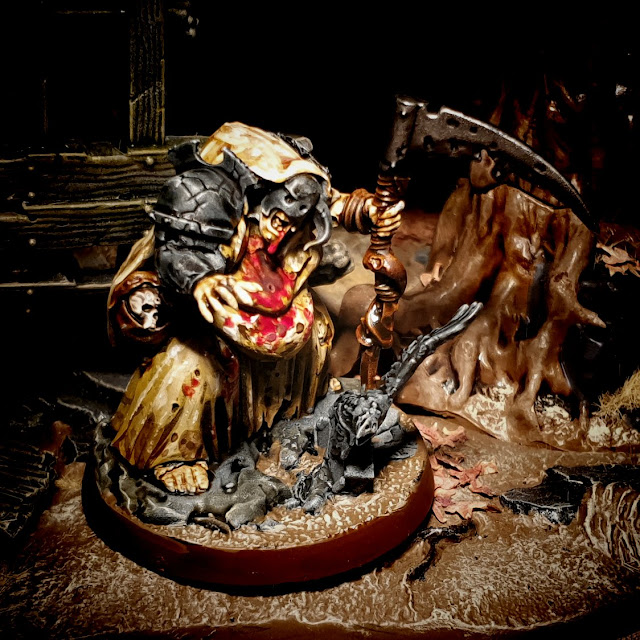 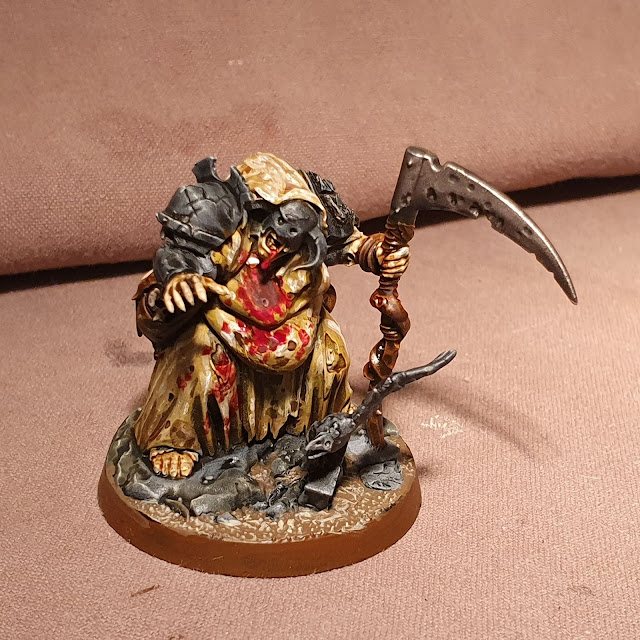 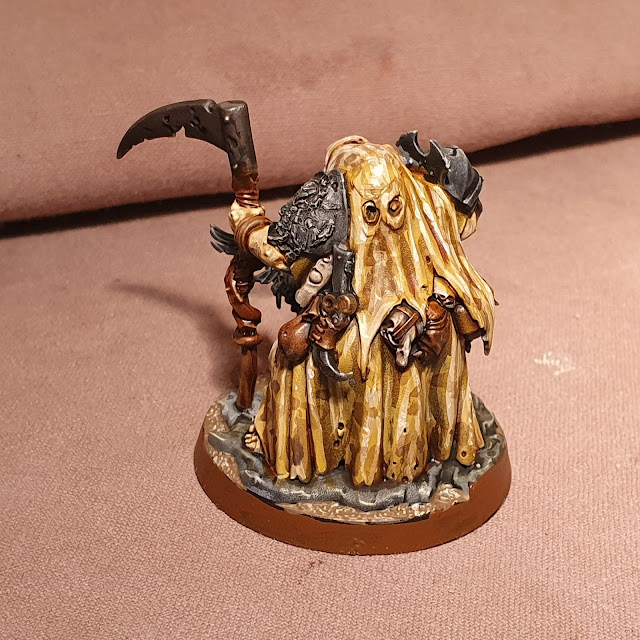 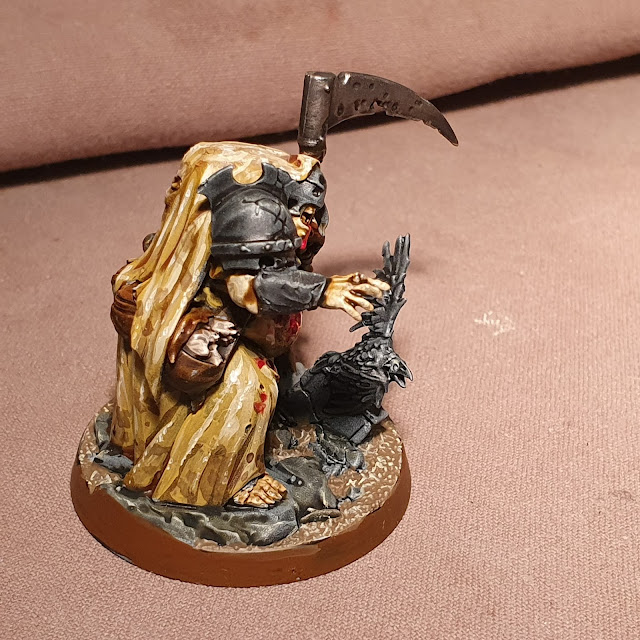 Haryom, The Shunned Knight.
Haryom views mortal humans with contempt; cattle to be herded and farmed. He kills without a second thought, not considering any a worthy opponent. 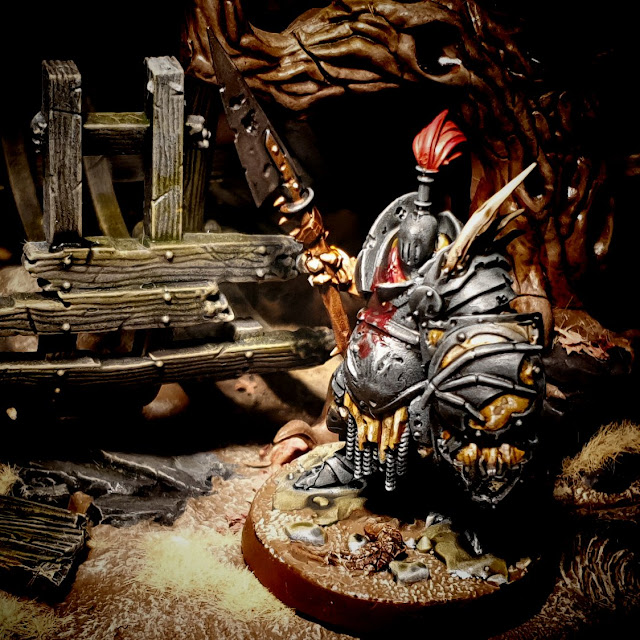 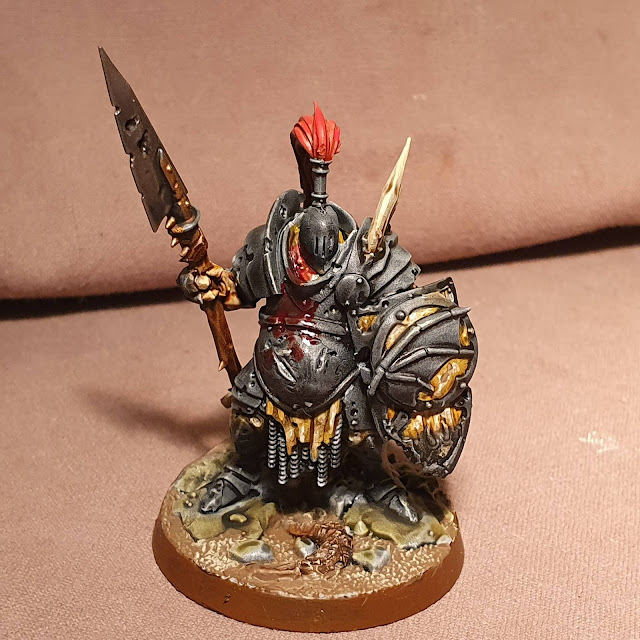 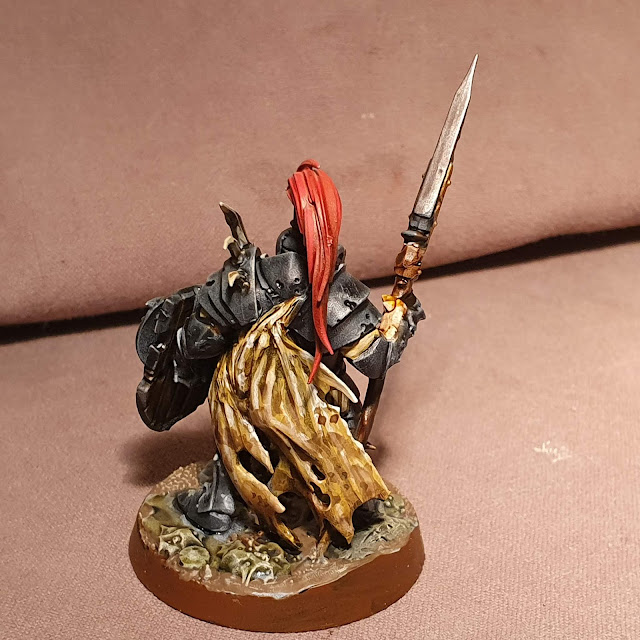 Yurkenor, The Outcast Knight.
Yurkenor is bitter and angry - he was a headsman in life and was hated for it. He also hated every moment of it. In undeath he continues this work as it is all he knows. He still hates it. 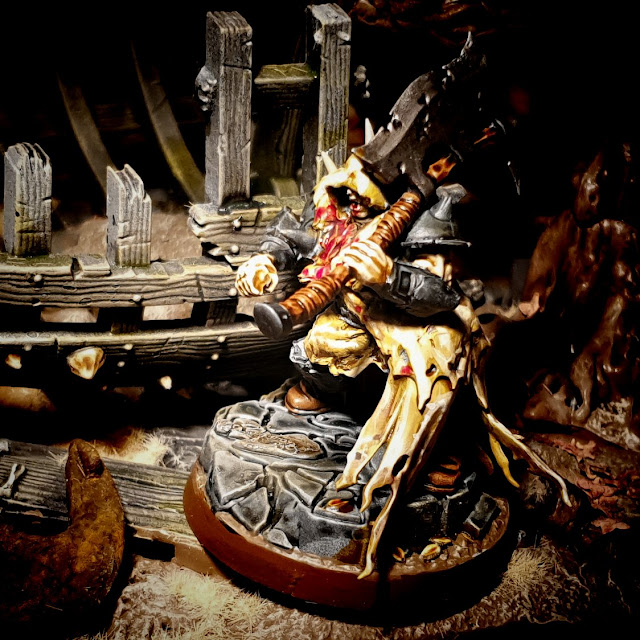 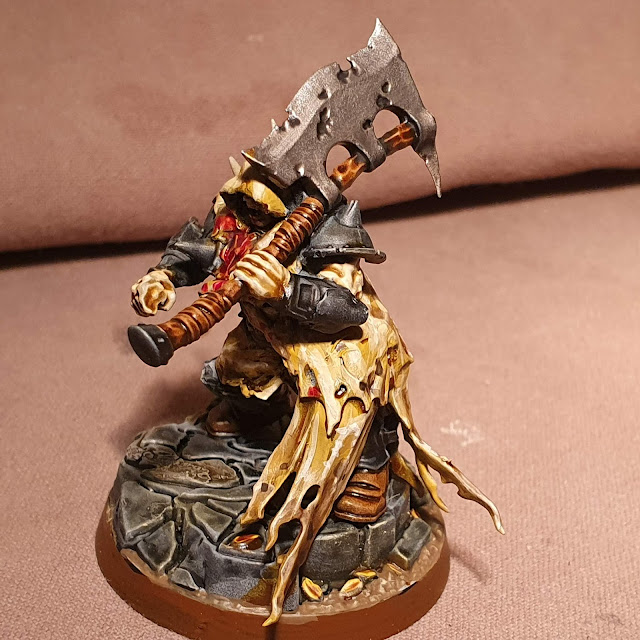 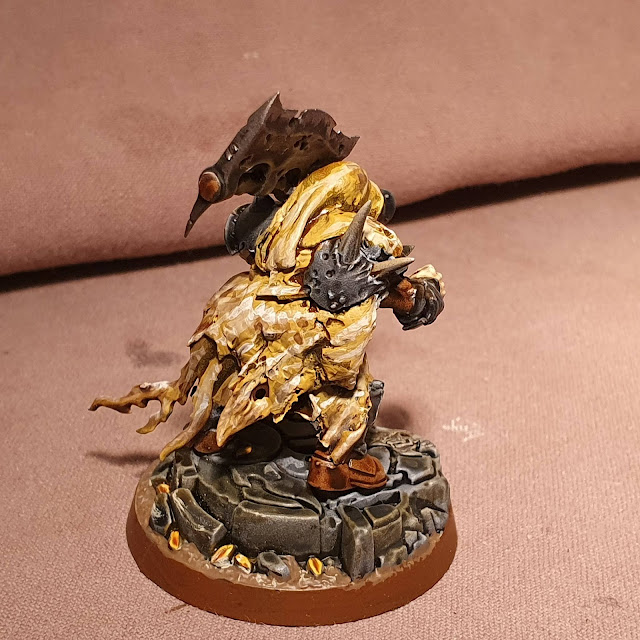 The whole Wardens of the Cold Flame warband, with the leader, Sharkan the Fallen Knight and Morddrak the Thrall Knight. 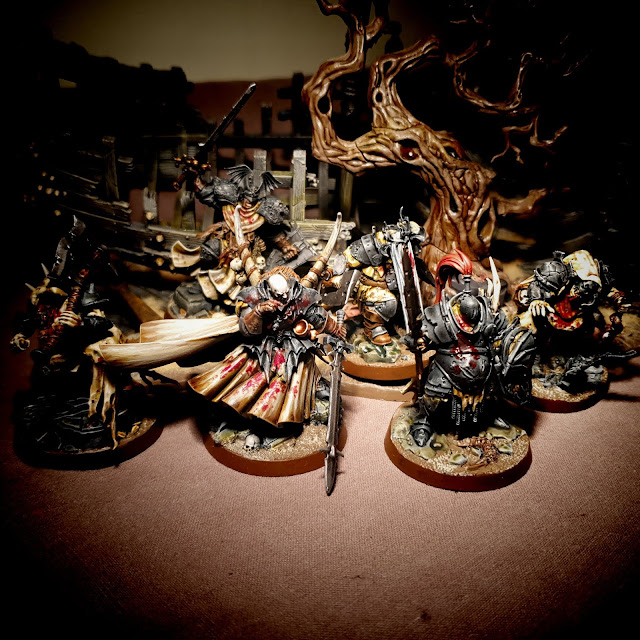 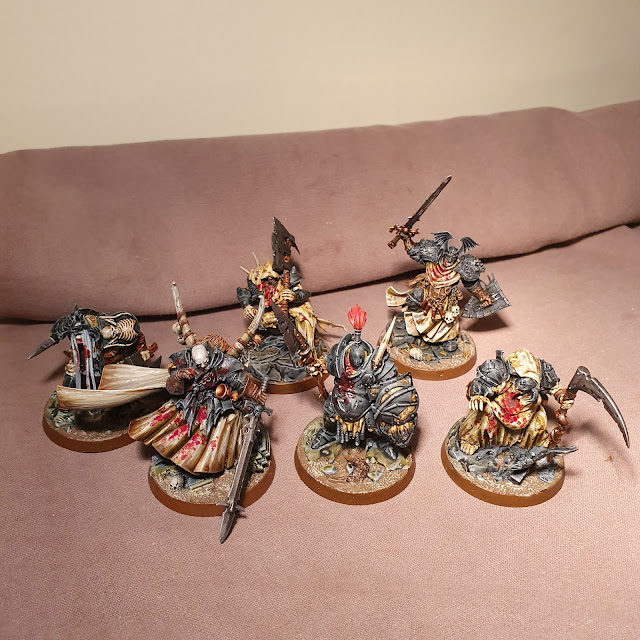 The Wardens of the Cold Flame are finished! I managed to get a few nights painting last week and finished off all of the vampires I've built (well, all bar one that wasn't working so I abandoned it). Annoyingly I have run out of Munitorum Varnish though, so they aren't quite "done" in my book. Obviously it's going to be a while until I get to play a game with them, so there isn't really a rush...

Six models are well over a thousand points in Warcry, if I pick the right "counts-as" Stormcast cards. I'm seriously considering playing them as Prosecutors - their higher speed (and Flying runemark) feel right for vampires, and the weapon options match quite well too.
Posted by WarbossKurgan (Saul) at 23:08

Email ThisBlogThis!Share to TwitterShare to FacebookShare to Pinterest
Labels: Age of Sigmar, AoS28, Blanchitsu, Dark Age of Sigmar, The Harrowmark, The Realm of Death, Warcry, Wardens of the Cold Flame, Warhammer, Wortbad