The Dust Hogz
This list is Power Level 24 in total, though I am unlikely to use all of them in every game.
We are not using a Power Level limit for games in the campaign but the player with the lower Power Level will get advantages - an "underdog bonus" (probably Open Play Ruse cards). The Warphead and the ork Boyz are not finished yet.

Exploring and charting the edges of the Malfactus Rift.  This small group of characterful and individual Freebooters: pirates, adventurers and scavengers, explore the outer fringe of the Dark Imperium. Poking around in Space Hulks and on backwater planets, finding ancient alien gubbinz and getting into scrapes.

Throttle used to be part of the infamous Blood Axe warband known as Da Fifty Fiff Bad Redz Brigade, but he was outcast because he was far too interested in loot, and not interested enough in the militaristic formalities the Bad Redz delighted in. He became a Freebooter and set off with a very small group of Boyz loyal to him. Since hitching a ride on a Space Hulk that dropped out of warp space in the Ghoul Stars he has gathered a few more followers to his crew.

He is often exasperated and constantly frustrated by the failures of his warband. He just wants a "job" to go to plan; just once! 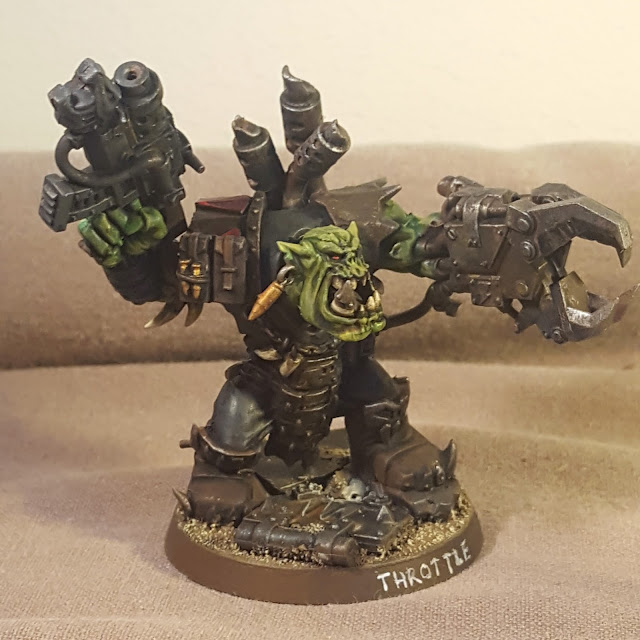 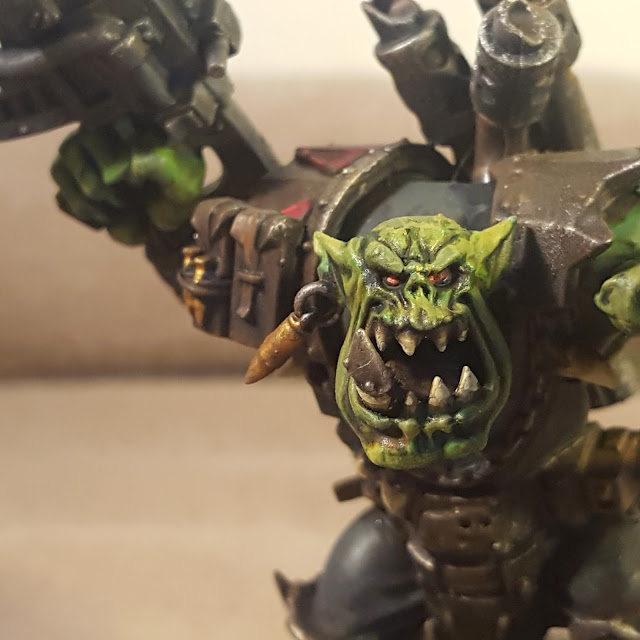 Bossnob Nognox is a loyal first mate and a tough, deadly fighter. He has been at Throttles side since the "old days" in the Fifty Fiff. 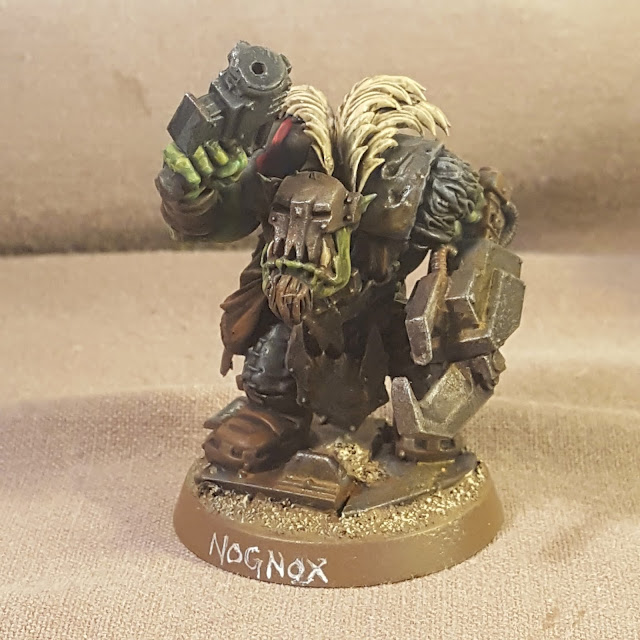 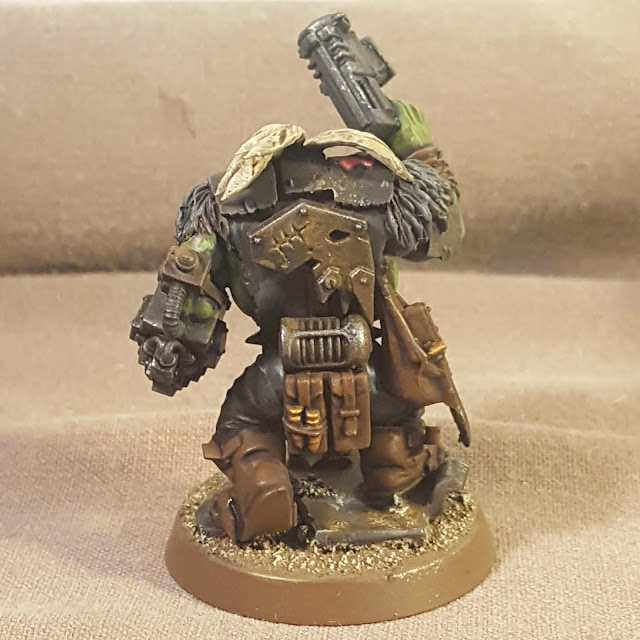 Mugwak is a miserable git. He mourns the loss of his lost mob-mates, and keeps a Slugga from each dead Nob as a memento, believing that he will gain some of his dead mates' strength by carrying them. 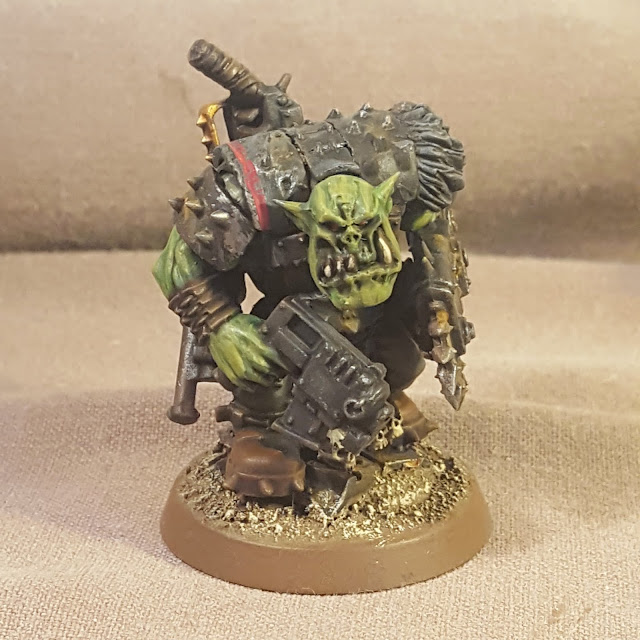 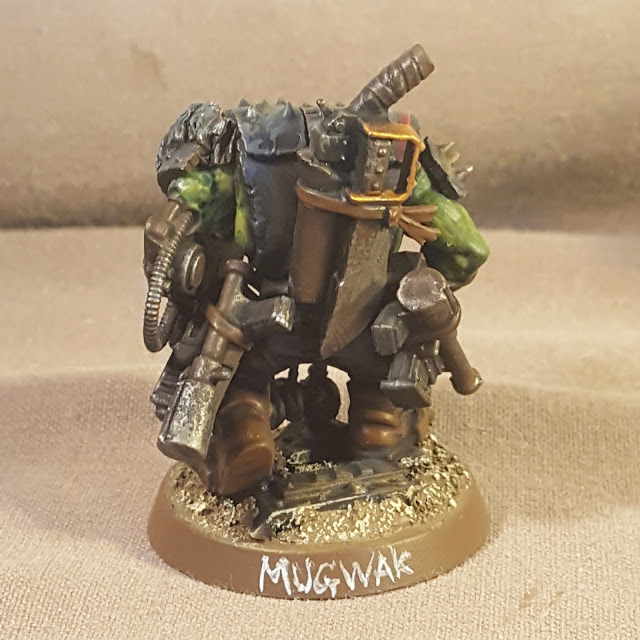 Smarg is a sarcastic bastard with a bionik eye. He never says what he means and what he says is always mean. 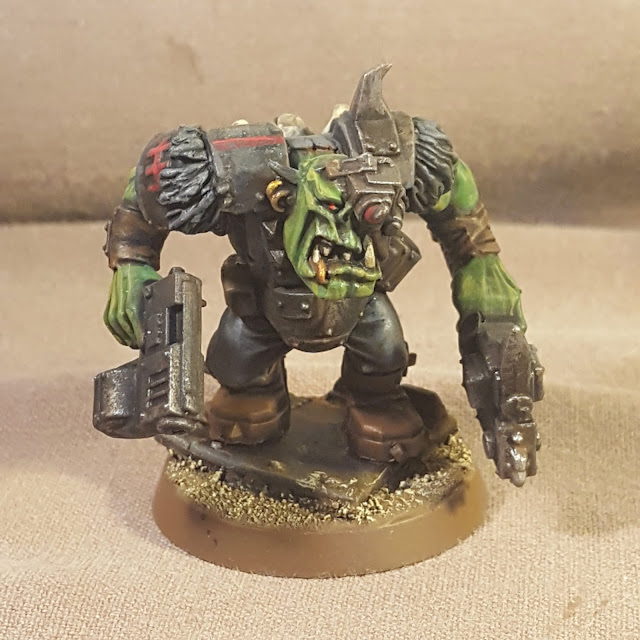 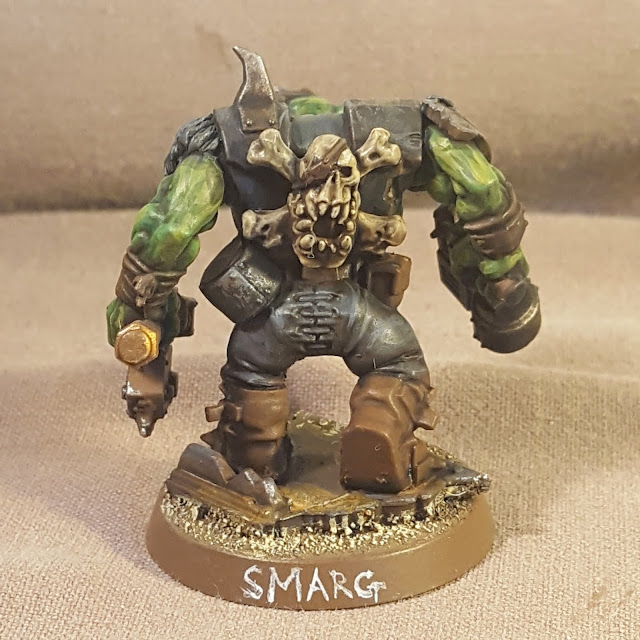 Draktor is the warband's heavy weapon specialist. And he is a bit thick. But since his brings the big guns and seems to know not to shoot anyone on his side the others put up with him. 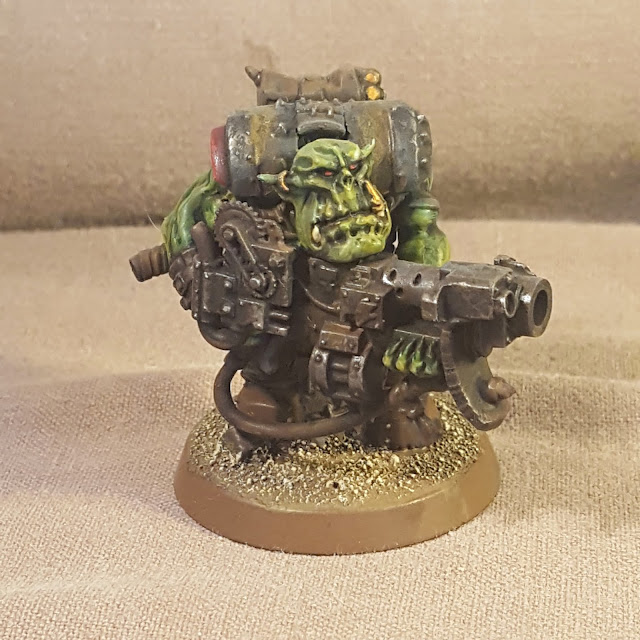 Arg is the warband's psychopath. He is always first in the charge and though carries a slugga on his back he rarely uses it, preferring to get "messy" with his Big Choppa. 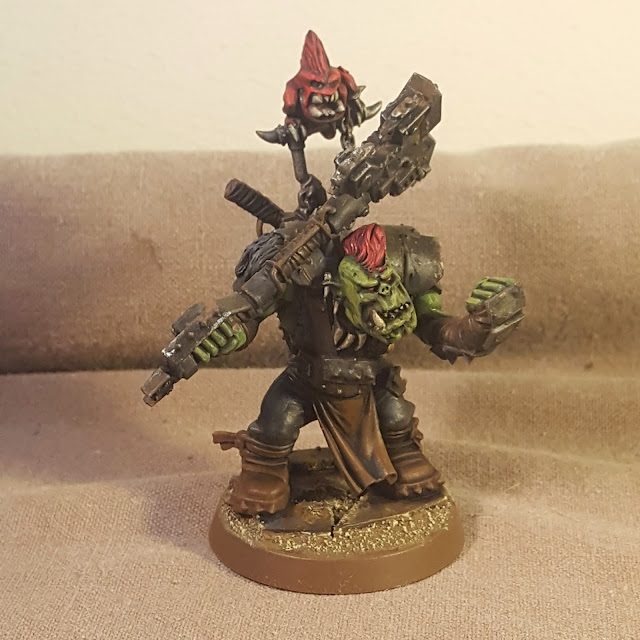 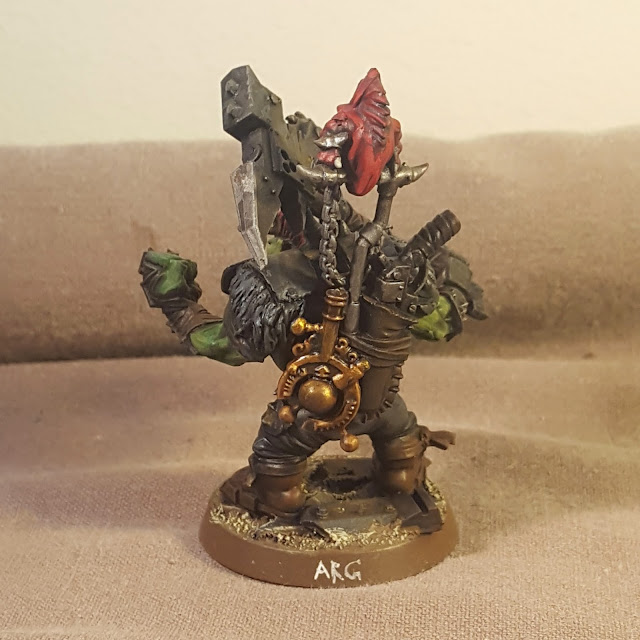 Hoop and Twitch are the warband's fetchers and carriers, dogsbodies and slaves. The run errands, carry messages, fetch ammo and try not to get trodden on. The class a day when they don't nearly die as a good day. They have only been with the warband for a few weeks, they don't know but they are the latest of a long line of Grots that usually have very short lives in the Dust Hogz and they are already well past their expected "expiry date". 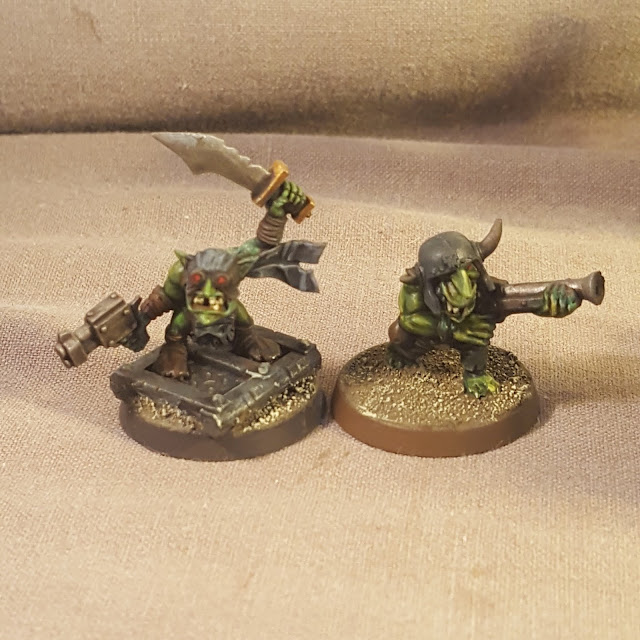 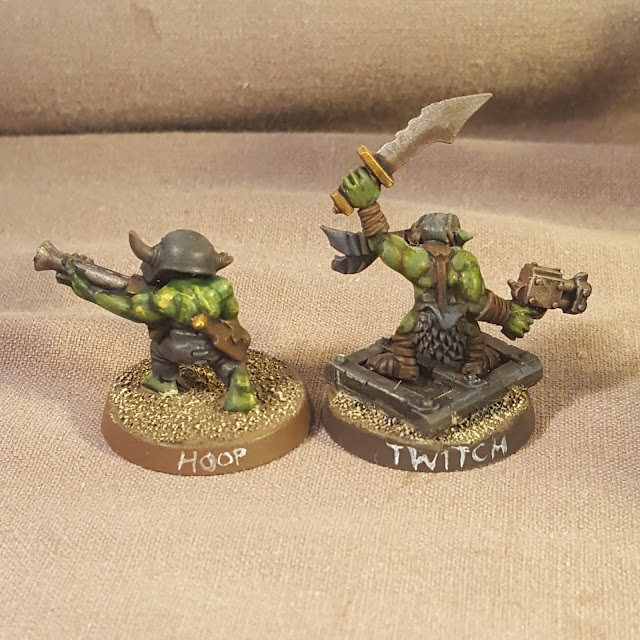 There are more to come (the 9 Ork Boyz led by Woz, for example!), but this is the warband as it currently stands: 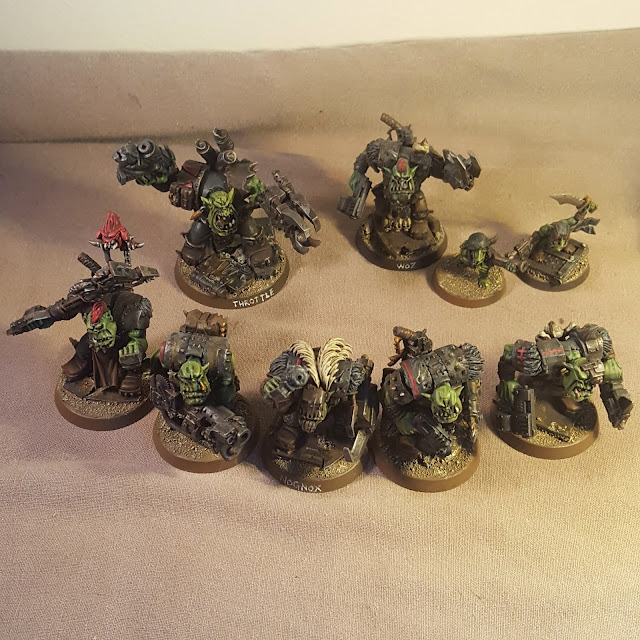