The most important part of the cargo was not on the shipwreck, rather it was flung not far away during the crash. Bruised and battered, the warbands rush to grab the fabled artefact.
(The winner's General can generate an additional Artefact/Spell) 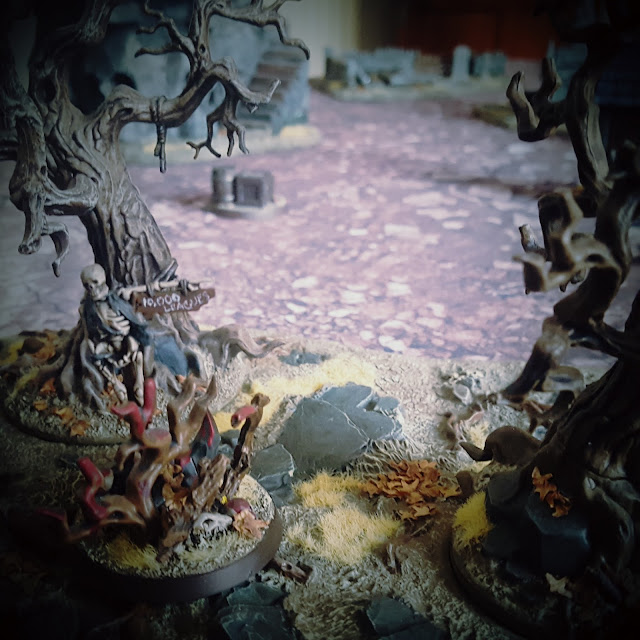 The cold light of an autumn dawn broke over the tangled forests that stretched on for ten thousand leagues in every direction. Wortbad stood under the path of the last voyage of the pirate skyship Rotmoon, and it was here that most of her cargo had been dumped as the ship careened out of control overhead, before it was wrecked a few miles away, somewhere beyond the next hill. 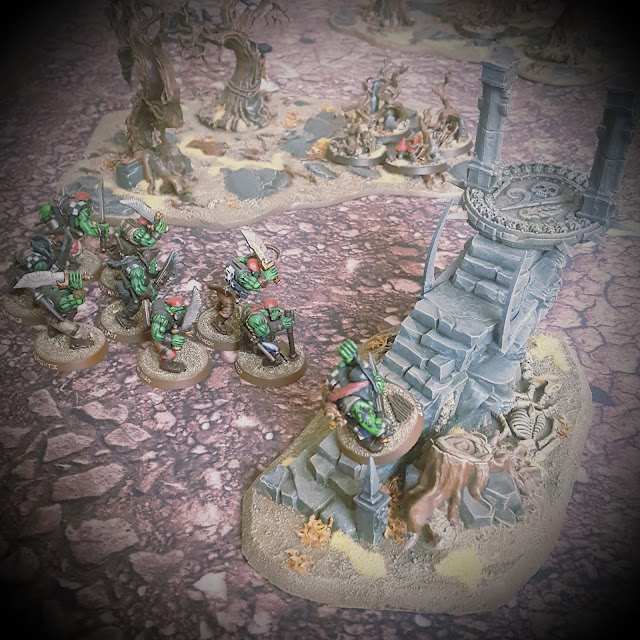 Kaptain Salty Ogbad chose to take the risk of harnessing the power of the Dreadfire Portal and ordered the rest of his crew to head for the chest that had been pushed off the deck of the crashing skyship. 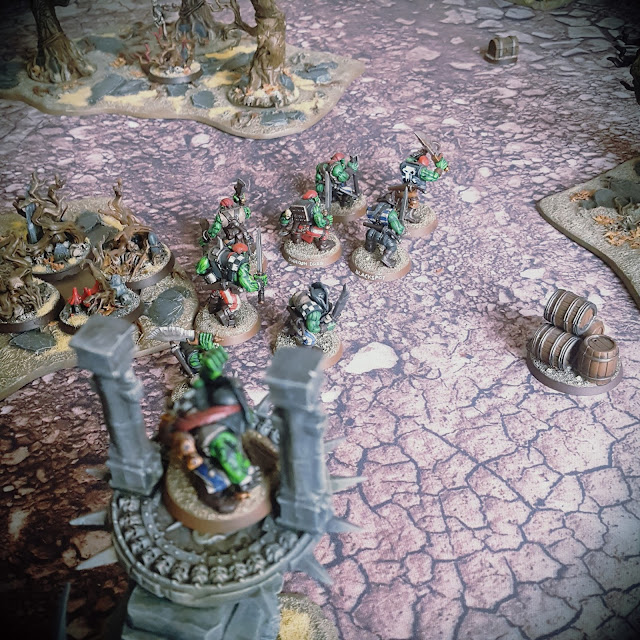 From the top of the stair he surveyed the edge of the village. 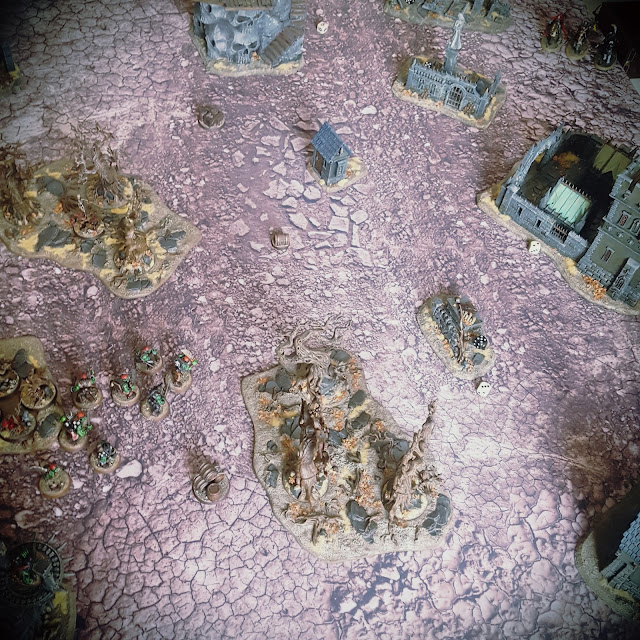 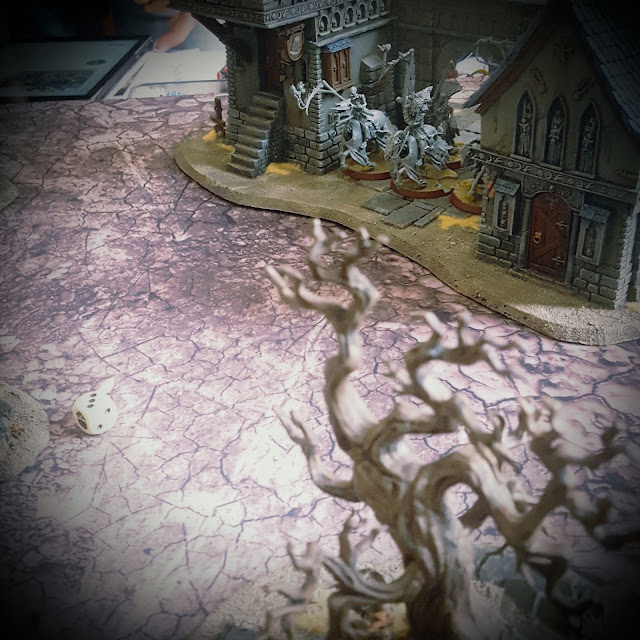 Ogbad saw the Ordeshal Host's cavalry appear through the gates of the Rose & Scythe Inn. 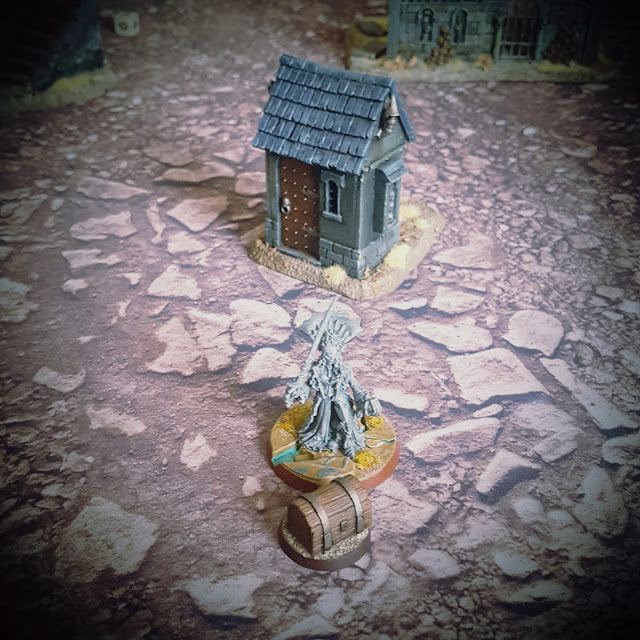 And he cursed as the Whyte Lady materialised right next to the chest. She opened it and revealed The Helm of Authority! The Orruk Kaptain roared with frustration and raced back down the stone steps, he chased after his crew. 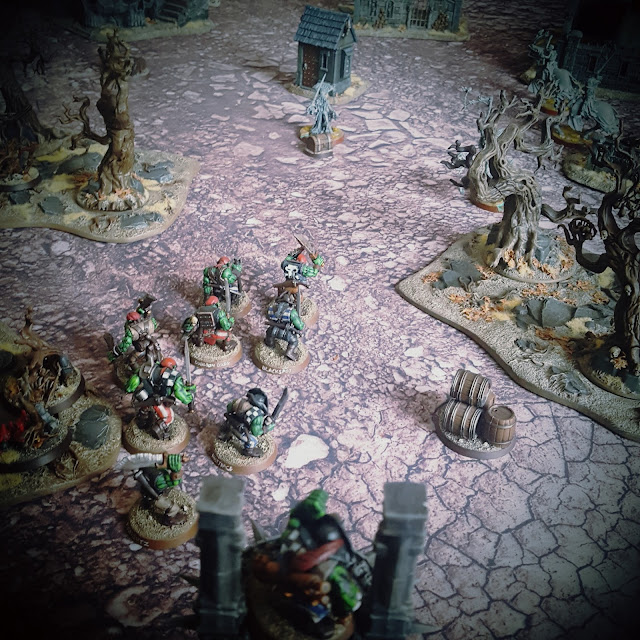 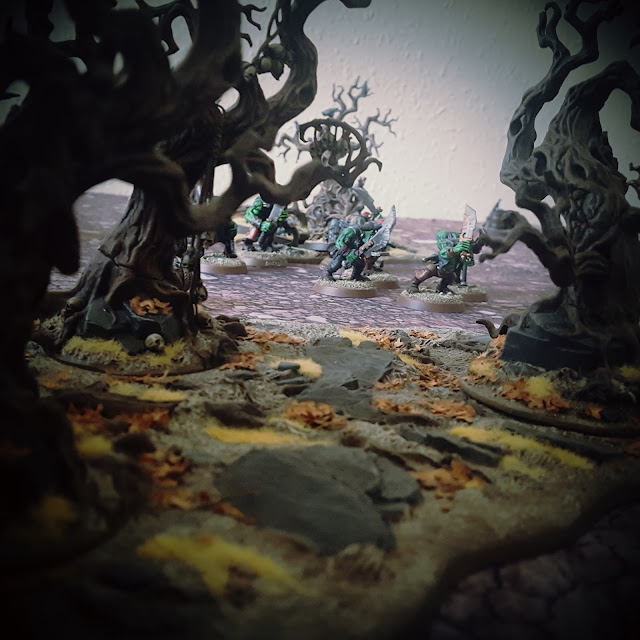 The Orruk Pirates continued towards the chest, but they were not undaunted: Several of the Ogresuns grumbled about old battle wounds playing up and urgent appointments elsewhere. 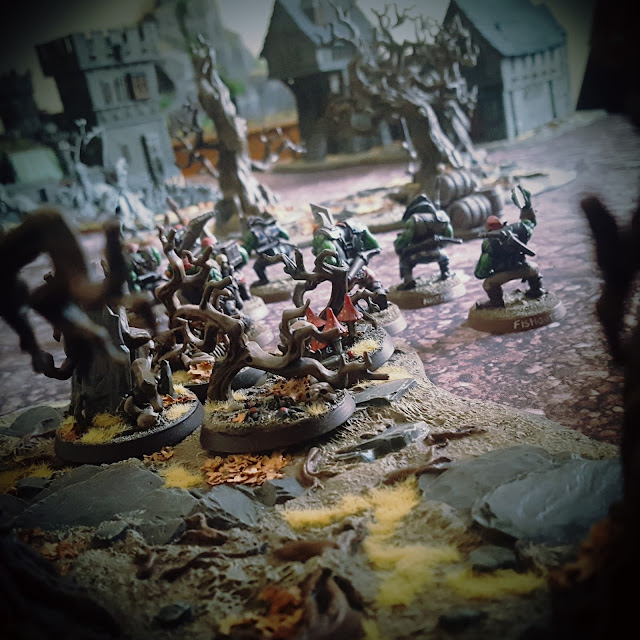 Dredger Zug was having none of it though and the pirates pressed on under his baleful gaze and hard words. The Kaptain was not far behind them too, which reinforced Zug's orders. 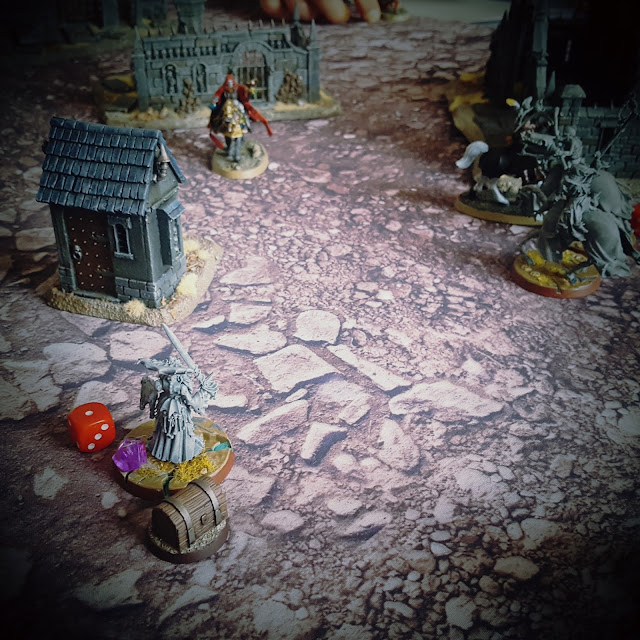 The Gilded Hand cavalry took on the ghost riders while the Whyte Lady and Kalyustar angaged in a magical duel! Arcane lightning flashed between the two wizards. 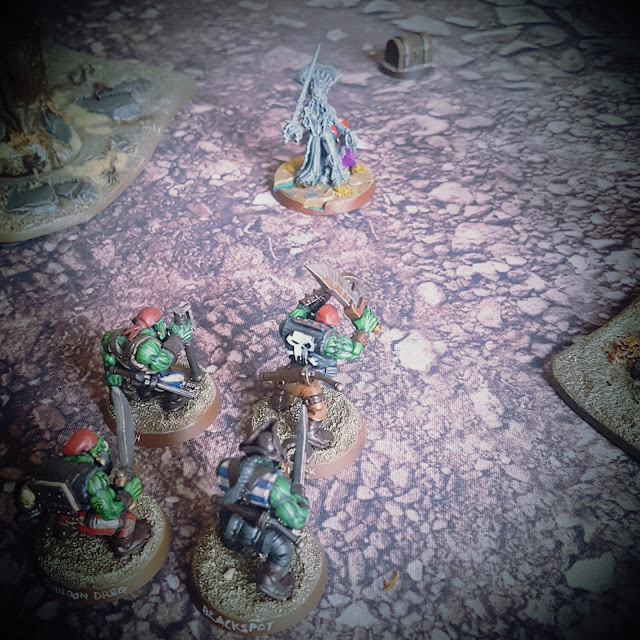 While the Gilded Hand cavalry were dealt-with by the Host the Whyte Lady turned her attention back to the Orruks. 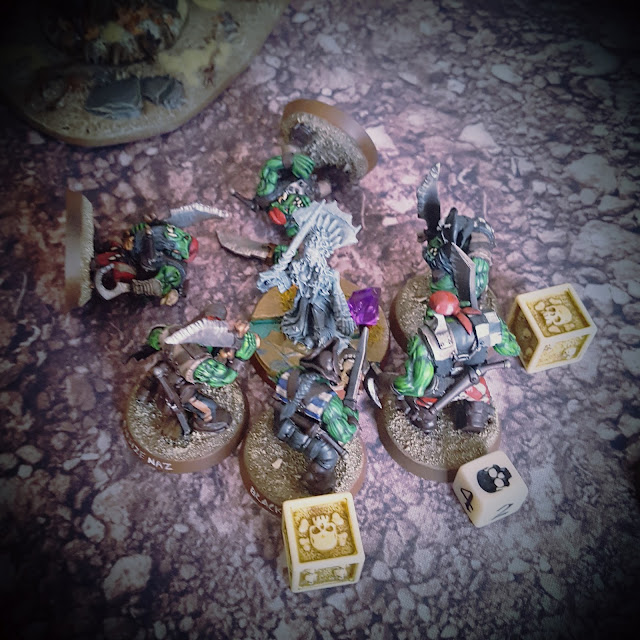 Her Mask of Horror stopped three of the Ogresuns in their tracks; frozen in terror! The Vampire cut down two pirates then used the life force of the fallen orruks to heal the wounds Kalyustar had inflicted. 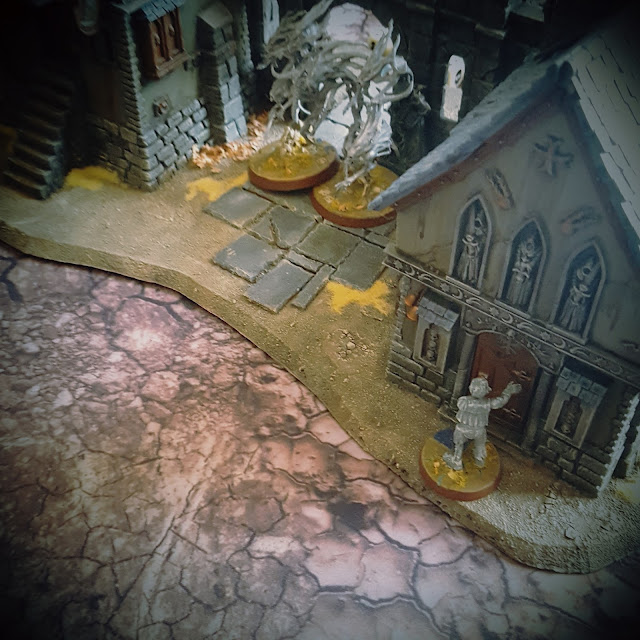 Noisey William arrived but he was entirely distracted by his disappointment that the inn was closed. 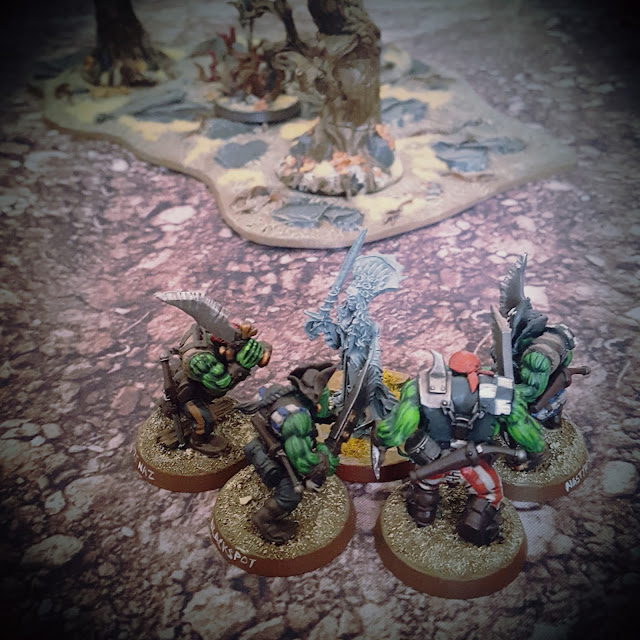 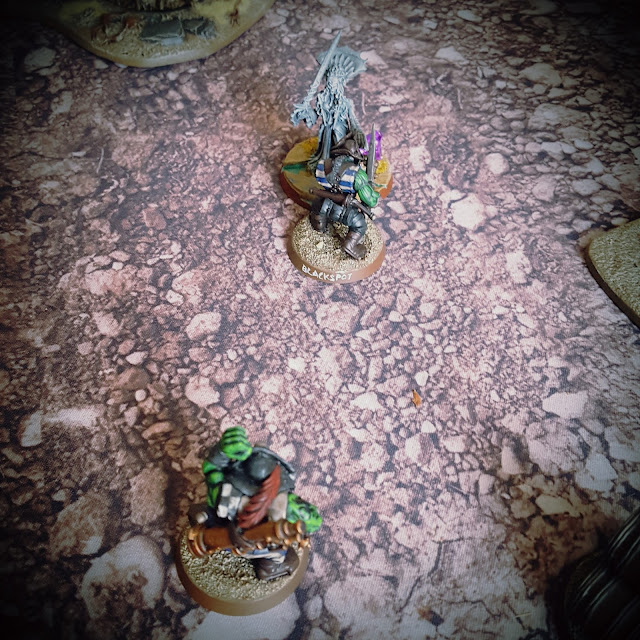 Only Blackspot held kept his feet long enough for the Kaptain to get close. 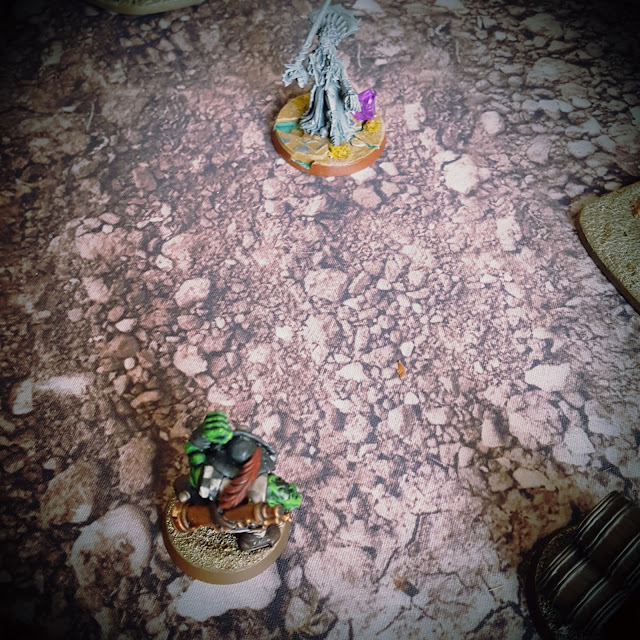 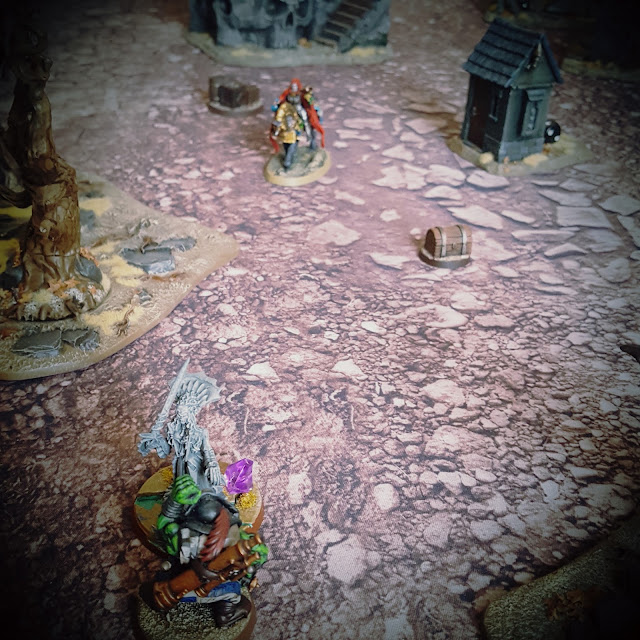 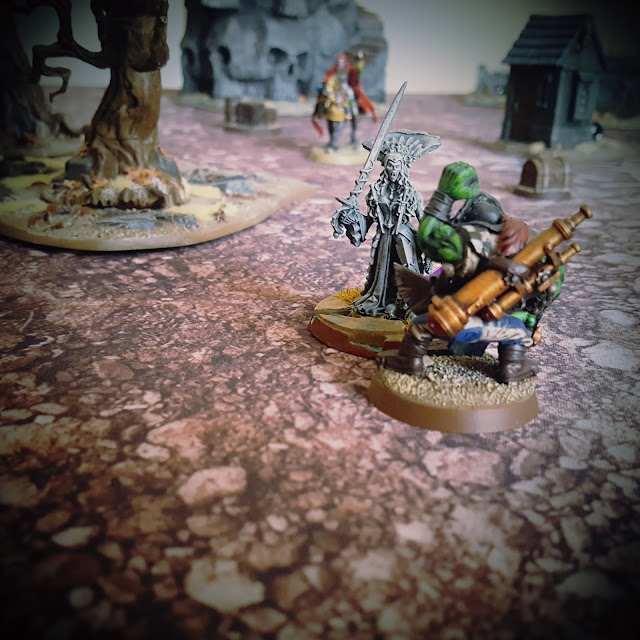 The Orruk Kaptain's merciless assault saw off the undead queen,  his Ogor crewman only deigned to join him once the vampire was banished. The two of them gloated over the Helm of Authority and the riches it would bring them! 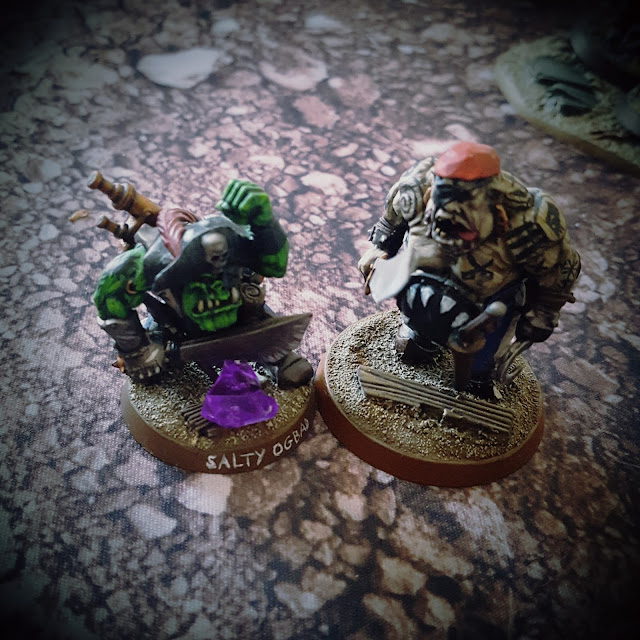