A plague of dark omens has the Mortal Realms in its grip. The hour of the damned is close. As the Time of Tribulations unfolds, the armies of the living find themselves united against a common foe - the slowly rising tide of undeath. Hidden secrets have been laid bare.

Our actions have attracted Lunaghast to the Mortal Realms, a colossal moon formed of dark datter from the Aetheric Void in which the eight realms hang. Thirsty for secrets and hidden truths, the moon has been lured to Shyish by the slaughter of prophets and seers. Across the lands, the peoples of the Realms are attempting to appease it by screaming their darkest secrets and most closely guarded knowledge from the highest peaks. Lunaghast greedily devours much of the knowledge brought about by these omens.

The Well of Souls

Souls are an abundant resource in the Realm of Death, yet all are bound to but one master - Nagash. Robbing the Great Necromancer of his due is an act of audacity that comes with the most terrible risks, but such are the potential benefits that there is rarely a shortage of those willing to try...

Stealing souls: Each time you slay an enemy model, roll a dice. On a 4+ you have captured the slain models spirit and gain 1 soul token. In addition at the start of any hero phase in which one model from your warband is within 3" of the Well of Souls, you gain D3 soul tokens.

In a clearing, deep in the endless malignant forest that covers the Harrowmark, the broken dais was now being used for macabre purposes. The Shattered Circle was always known as an evil place. The raw Death Magic that permeated the area was tangible even to those without magic sensitivity. For those with the Wyrdsight the amethyst energies that swirled and eddied around the ruined dais were clearly malevolent and extremely powerful.

Now the Time of Tribulations had come the power of the Circle was laid bare, the soul-essence of anyone who died near it was trapped there and not free to travel to its long-anticipated underworld. For anyone with the right arcane container, and foolhardy enough to try, the trapped souls could be collected.

With their star-fallen amethyst-infused skull in-hand the Rotmoons made their way to the Shattered Circle, via the Gheistgate, intent on gathering a macabre harvest. The words of El Doctoro the shaman rang in their ears: "Harken the Portents of the Black Void!" 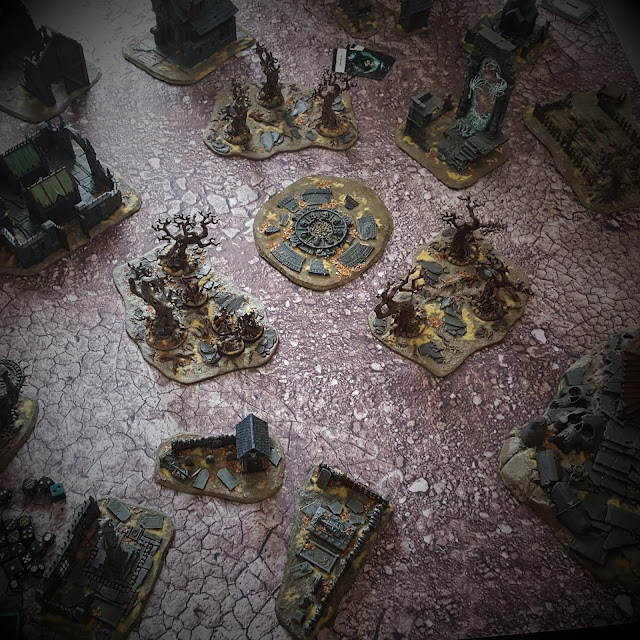 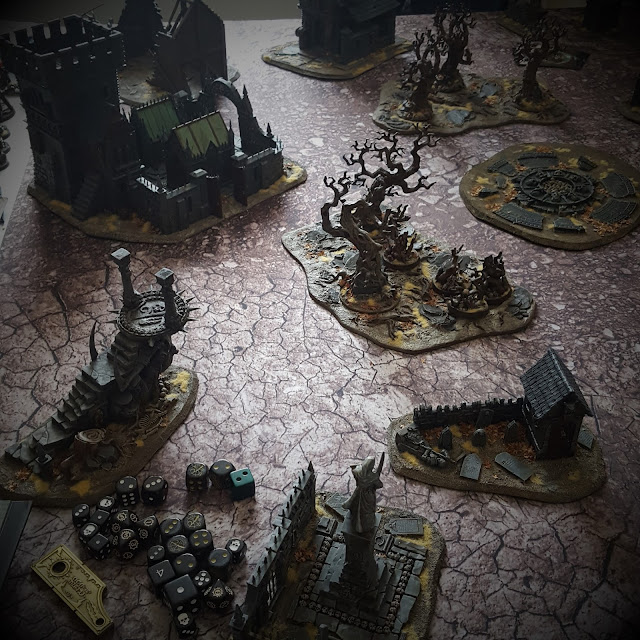 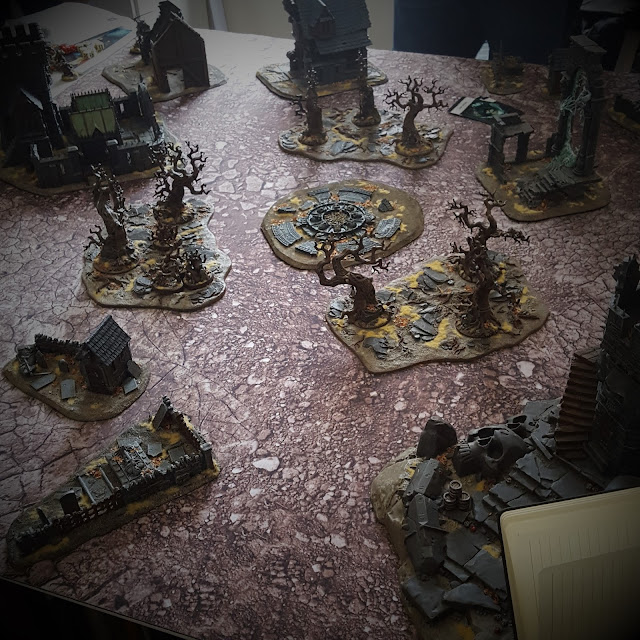 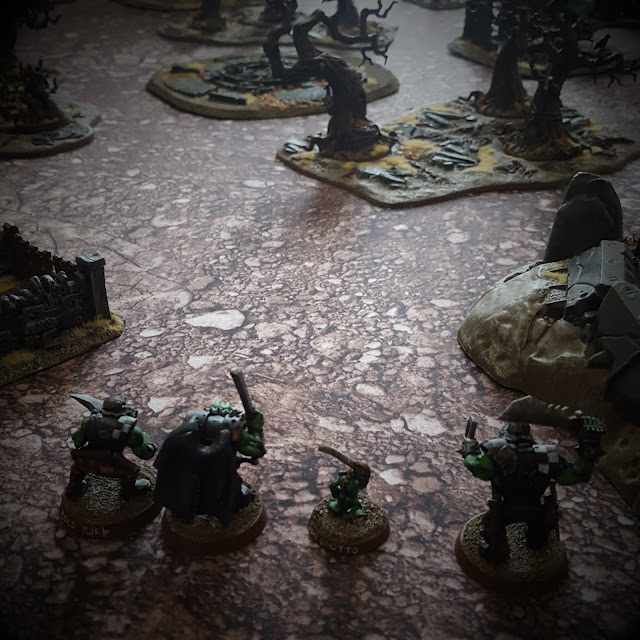 Through the gloom of the woods the Rotmoons spotted the Shattered Circle and hurried towards it. Somehow Percy Percy had become separated from the rest of the crew, but the Kapitán was not worried, he would catch up. 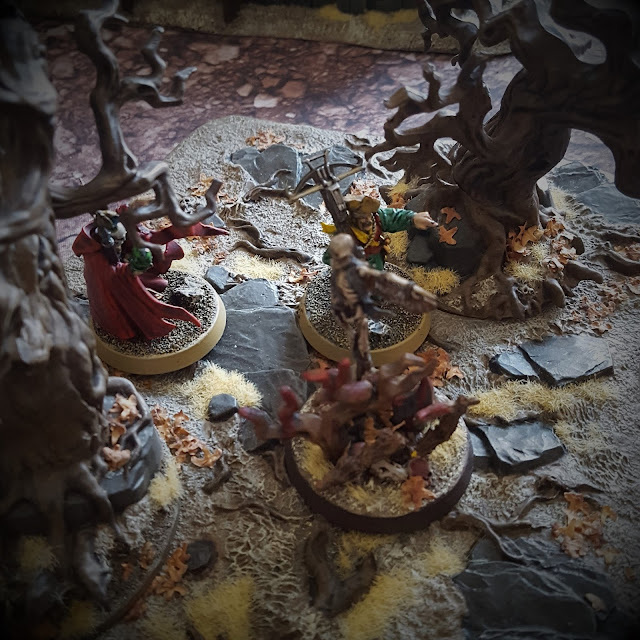 Kalyustar and a marksman were lurking in the western woods. 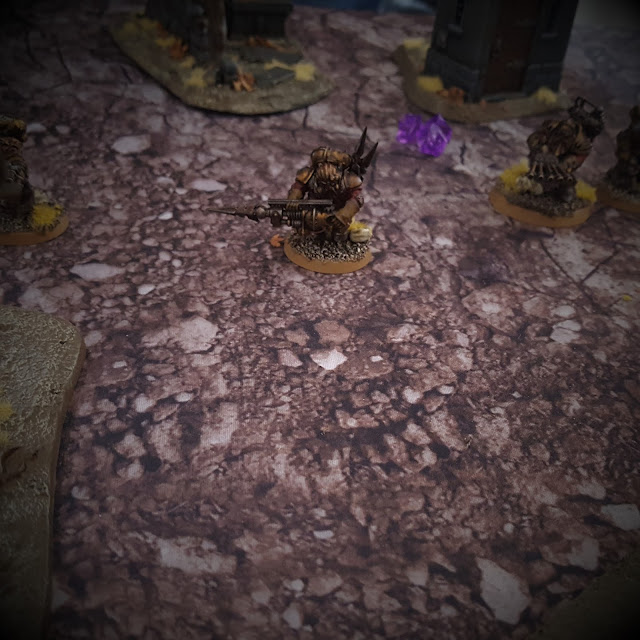 The Raidho Othalas approached from the north. They aimed a Skyhook at the Rotmoons, but the pirates somehow convinced the Kharadron to fire at the Gilded Hand instead by quoting the Code! 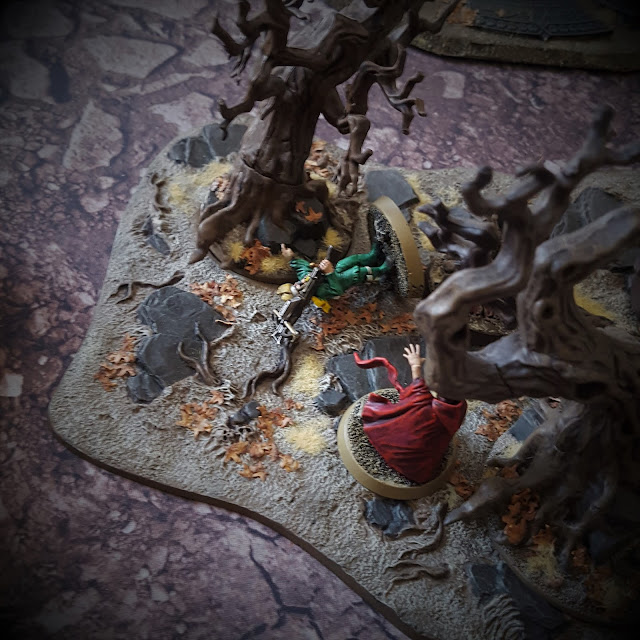 The marksman fell, and to Kalyustar's shock and fury, the Kharadron entrapped his soul! 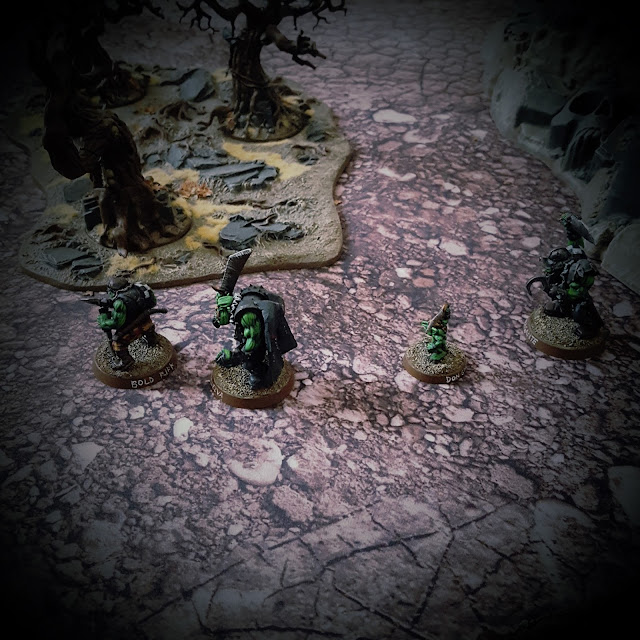 The Rotmoons chuckled to themselves, proud of their sneakiness, but this was only the start of it! 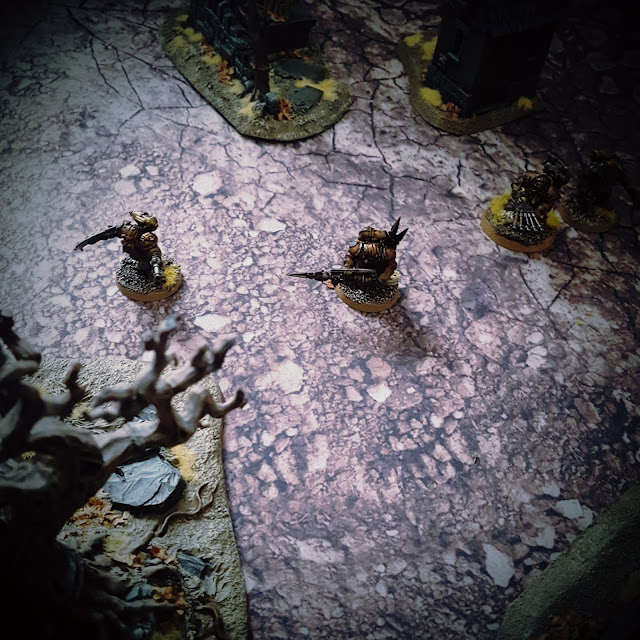 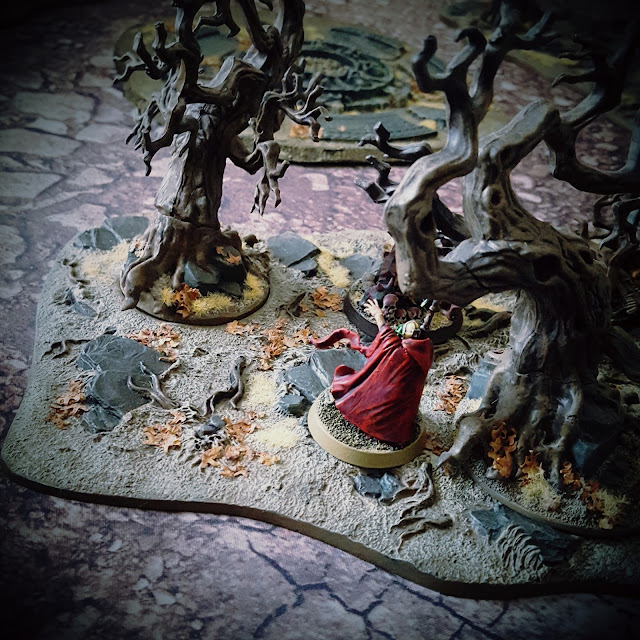 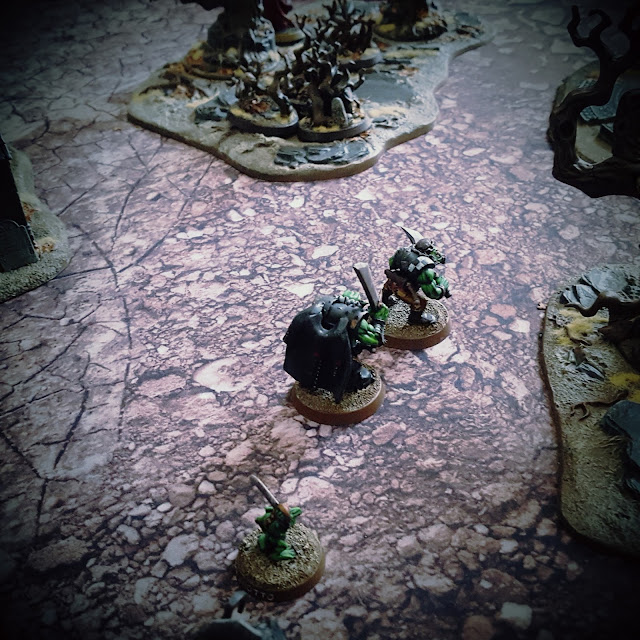 Kapitán da Leeva advanced, with Bold Rikk ahead of him. 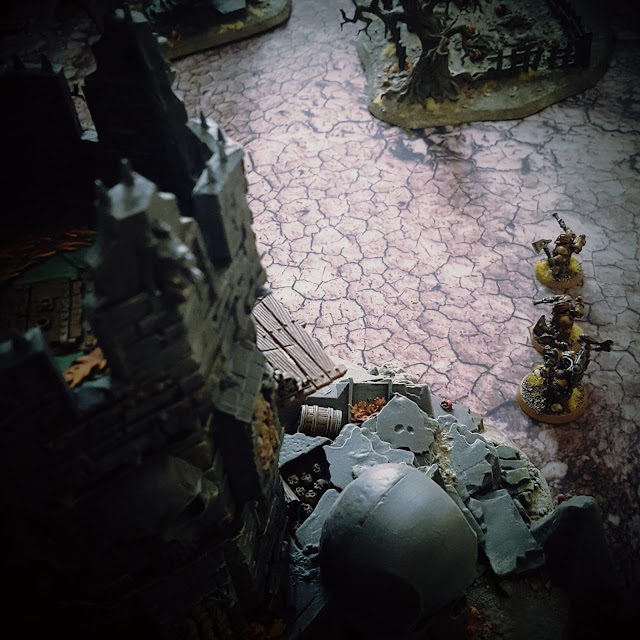 The second wave of Kharadron arrived, hidden behind the Freebooter's Tower. 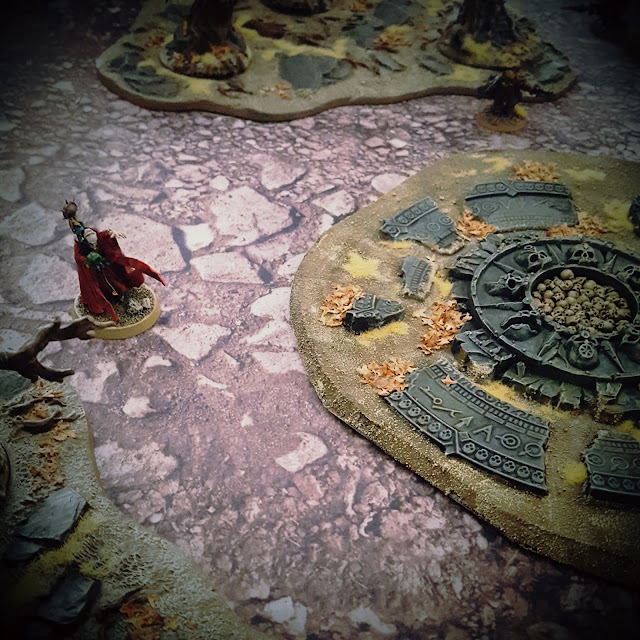 Kalyustar and an Arkanaut got to the Shattered Circle first and both gathered a deathly bounty from the Well of Souls. 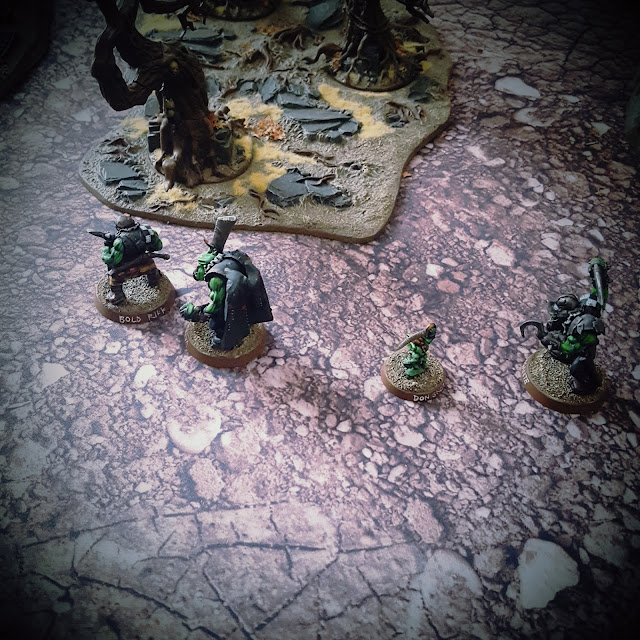 The dark signs shifted and the fates contrived. Kapitán da Leeva laughed to himself as he found a way to use them to trick the Arkanaut and Soulchemist into wanting to fight each other, against both of their better judgement! 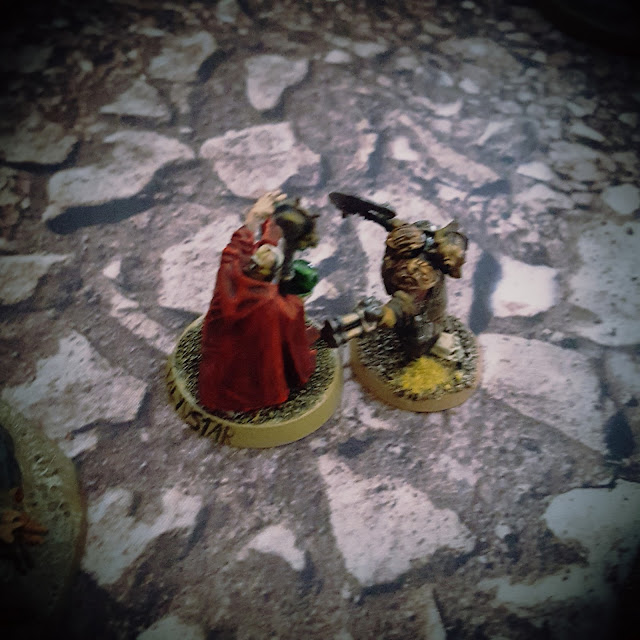 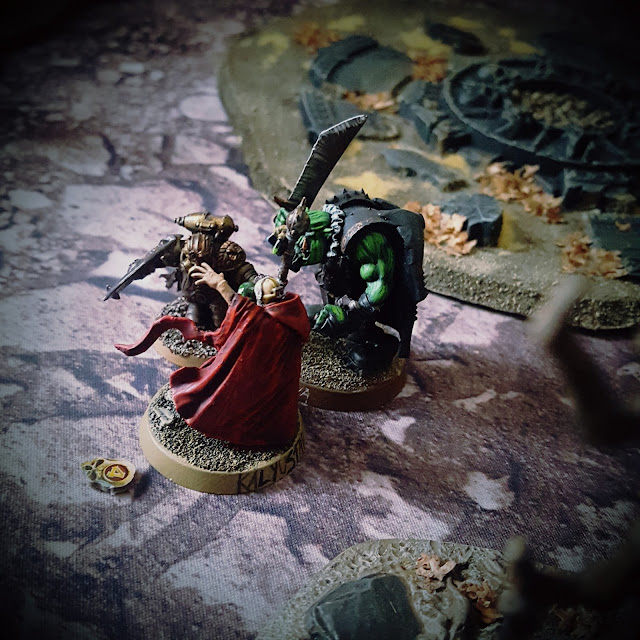 Kapitán da Leeva pushed passed Bold Rikk and charged at the combatants! They realised that da Leeva was their enemy but it was too late! Blood had been spilled. 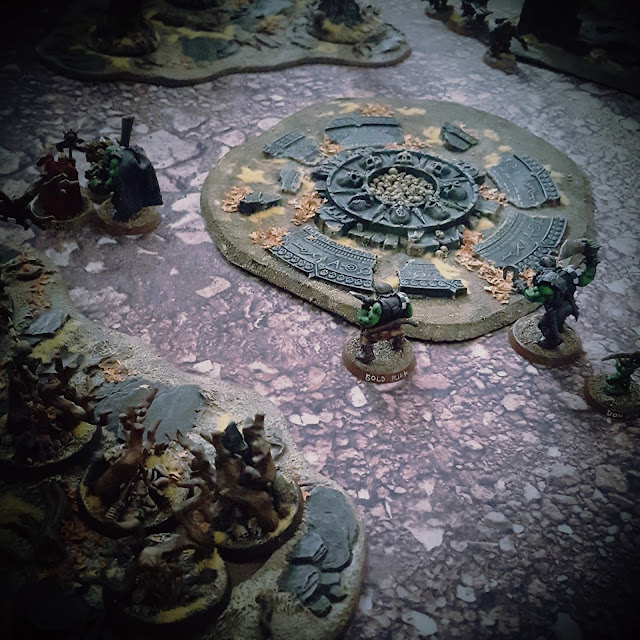 The other orruk pirates rounded the Shattered Circle; a harvest of many souls was reaped by all three warbands! 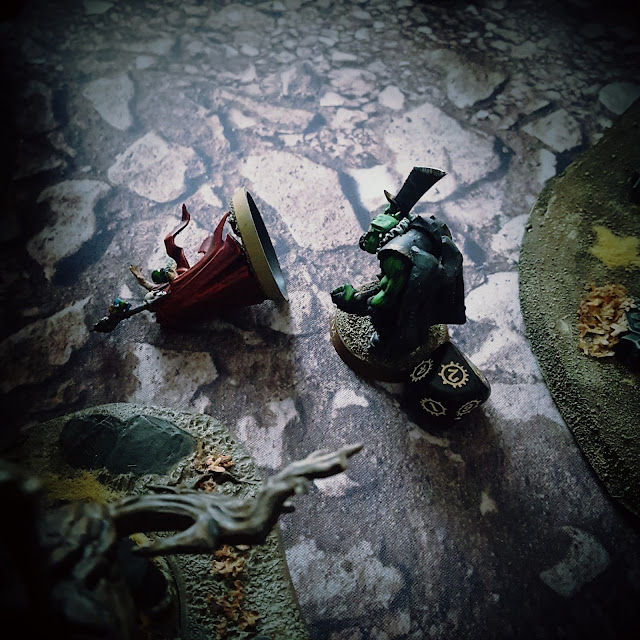 The Kapitán blasted the Arkanaut with a heavy flintlock pistol that was loaded with a mix of black powder and Shyish Realmstone sand, smashing the bullet through the Arkanaut's chest in a flash of fire and Invisible Gheists, then rounded on Kalyustar. The Soulchemist tried to manifest an Arcane Bolt but the magic failed on his fingertips and da Leeva cut him down. 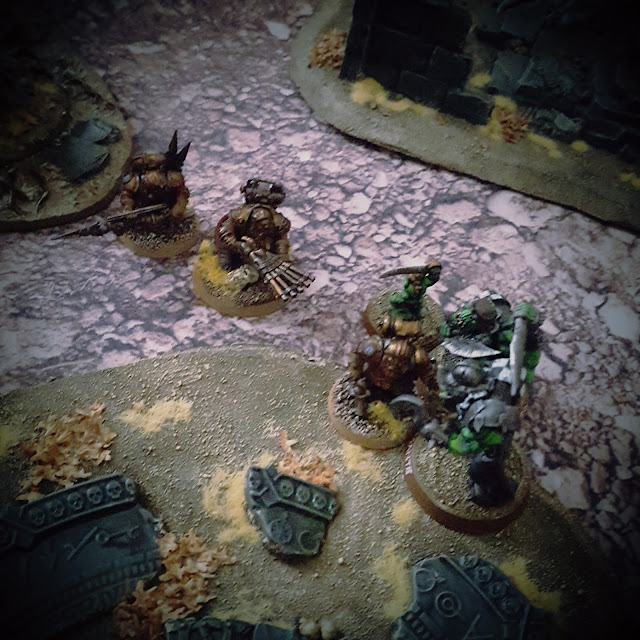 Kapitán da Leeva fired his second pistol at a Thunderer with a Skyhook; the black powder and Shyish Realmstone sand mix once again worked with devastating results! Invisible Gheists swirled around the Thunderer's corpse!

Dragante was felled by the Kharadron Navigator while Percy Percy suddenly disappeared in the darkness - he was warned by the Portents: Don't Go Out Alone! But he did not heed them, to his peril.

Kapitán da Leeva charged and ran-down the Thunderer with a Deck Sweaper, who was unable to match the ferocity and skill of the orruk privateer. The remaining Kharadron Raidho Othalas fell back, happy that their tally of collected souls exceeded that of the Rotmoons!

Rain hammered on the roof of the abandoned inn. The Rotmoons gathered round the fireplace in the main bar and talked in low voices of the day's adventures. The room was crowded and smokey and drink flowed freely, but there was no sense of revelry.

"The abundance of uncovered troofs allows us an unparalleled opportunity to settle grievances that have long gone unanswered. No gitz will escape our wrath." muttered El Doctoro, half to himself, as he examined the swirly ghostly energies that surrounded and penetrated the starfallen skull. 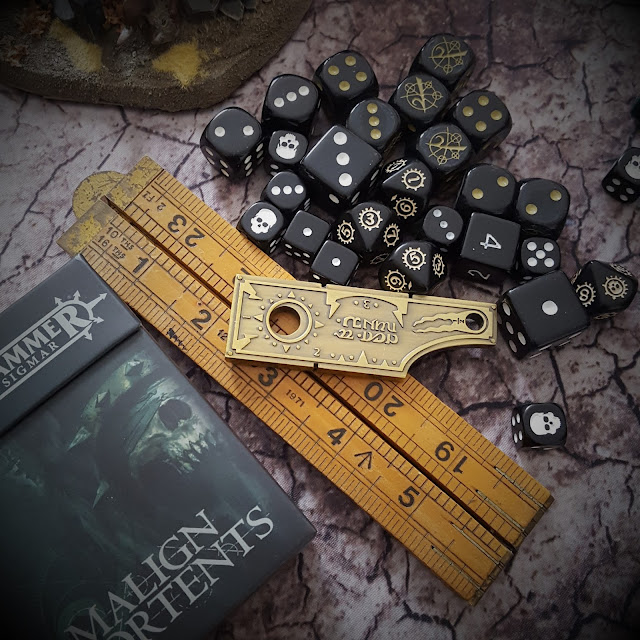 Soul Tokens:
The Raidho Othalas 6
The Rotmoons 5
The Gilded Hand 1
Posted by WarbossKurgan (Saul) at 11:33