"I hates swamps. Why do we has to walk around down here, can't we just sail over it low and just look over the sides?" complained Wrekka to Ropesend.
"Yaaargh!" said Ropesend.
The Cleavermaws made their way through the stinking horrible mires of Dungmoot, complaining bitterly the entire time, they did their best to explore as much as they could, and Lost Uzzog, their navigator-wardokk, took notes and drew a rough map. But many of them fell in the muddy waters and they were all in a very bad mood by the end of the day. Mogrum decided to head toward the lighthouse on the coast next, to stop the moaning at the very least. 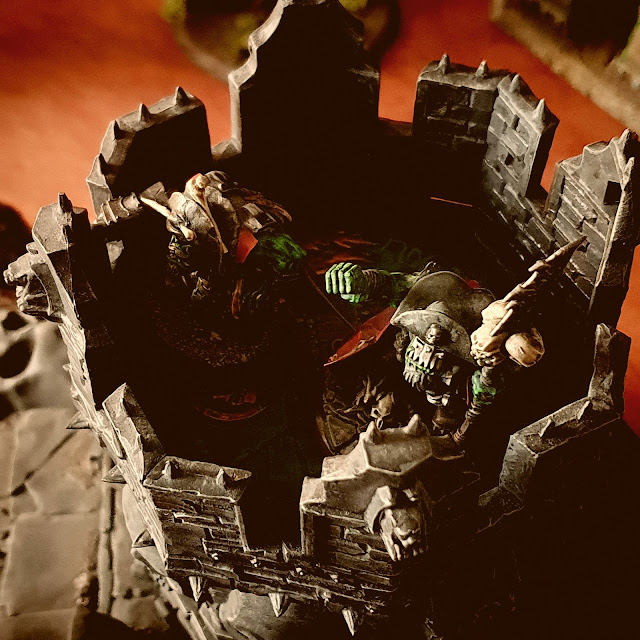 When they arrived at the smaller buildings clustered around the base of the lighthouse rock, the Cleavermaws broke into one of them and started looting. The crew emptied draws and chests, up-ended vases and boxes and scattered the contents of the furniture in the small tower all over the floor. They found a few interesting trinkets, but when they discovered an ornate compass they were elated!
"I bet that is the worm-compass what the Aelf was after. He'll pay a pretty penny for that, mark my words." said Dogvane jubilantly.
"It ain't a worm-compass, its a wyrm-compass" said Crowsnest disdainfully.
"What? That's exacted which I said didn't I?" said Dogvane, annoyed at the implication.
Mogrum sighed and told them to give it to the Baron for safe keeping until they got back to the ship and, only muttering a few objections, they did as they were told.
The Kaptain and a the Baron climbed the stairs up to the battlements to have a look around. A thunder storm rumbled over the Amber Sea, and it looked like it was heading their way.
The Baron started, he elbowed Mogrum and urgently pointed at something coming rapidly up the hill toward the stronghold: It was Skargat's Ironforged Ogors!
~ ⦽ ~ 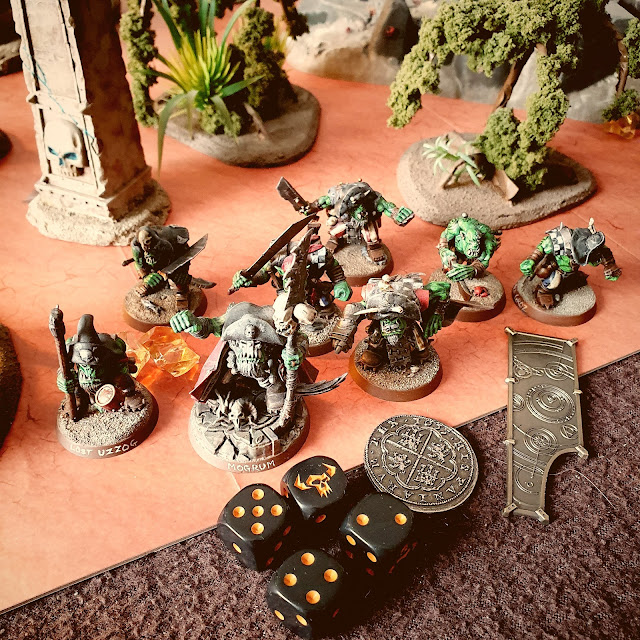 The Cleavermaws hurried outside so they didn't get tangled up in a siege. They didn't like sieging. 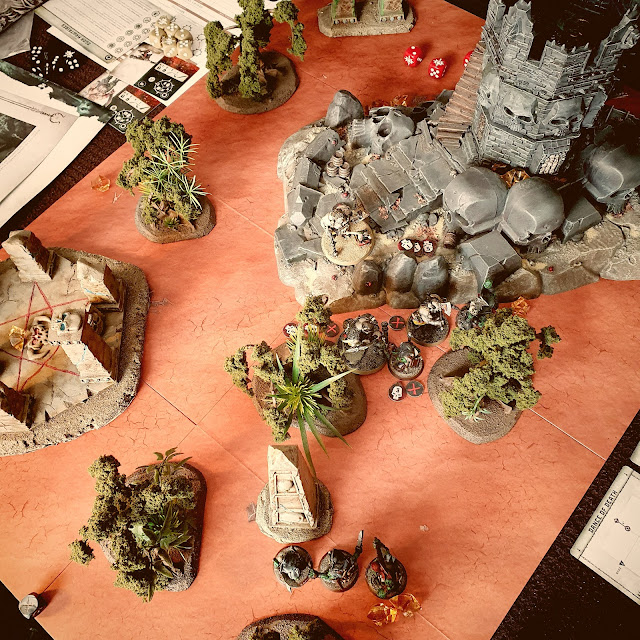 The Ogor Tyrant rushed at them with shocking speed and body-slammed into the front row of orruk pirates. 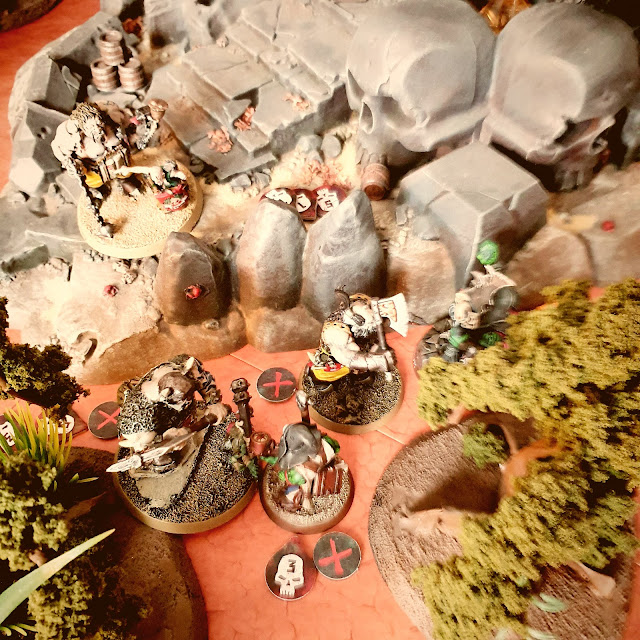 Lost Uzzog replied by smacking the monstrous brute with his Bonebeast staff. Green sparks blazed around the impacts but Skargat just seemed to shrug-off the blows. 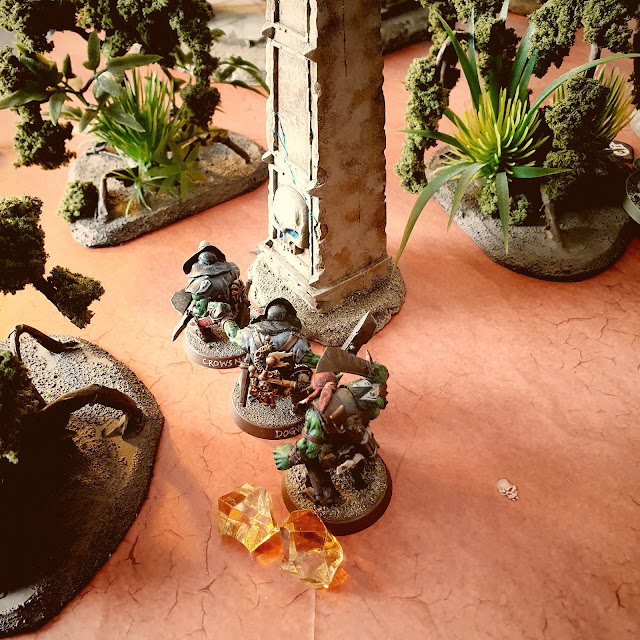 Sludga, Crowsnest and Dogvane headed after the Baron, to keep a watch on the compass, but they lost sight of him in the panic of the Ogor assault. Wrekka, Ropesend and the Baron were concealed among the trees. 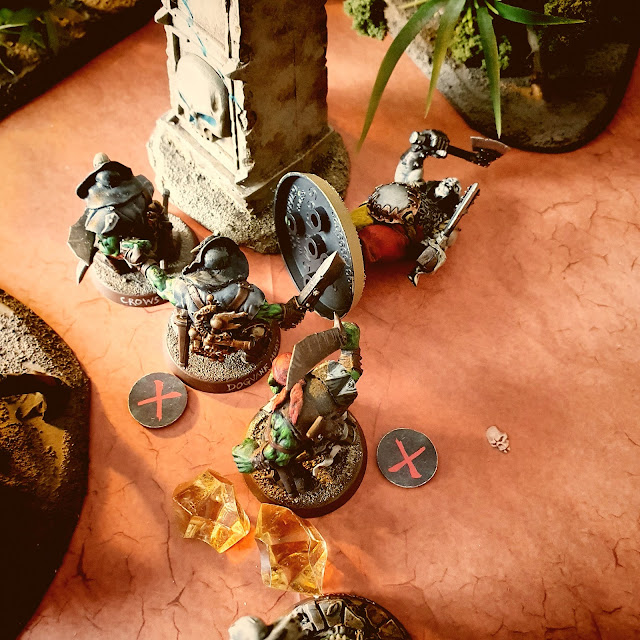 One of the Ironforged barrelled into Wrekka but the three of them ganged-up and quickly brought the oaf down. 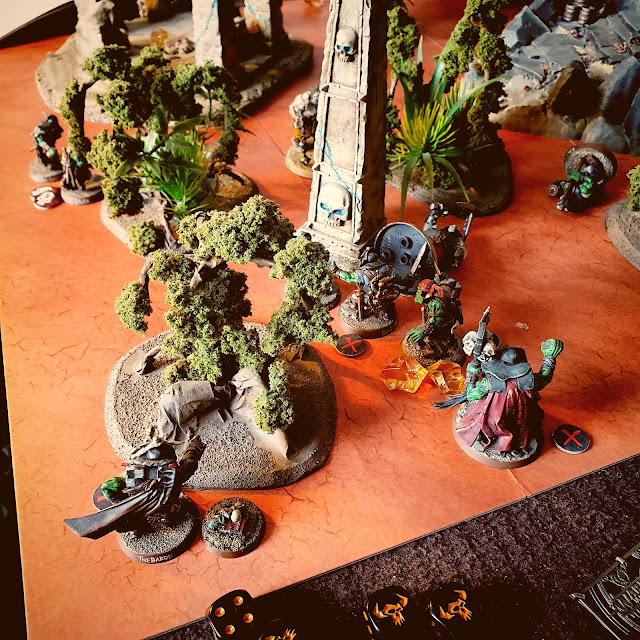 Mogrum followed Sludga and the Baron withdrew still further. The wind was picking up and it was hard to see through the swirling ochre dust. But he knew what the Ogors were after and did his best to protect it. 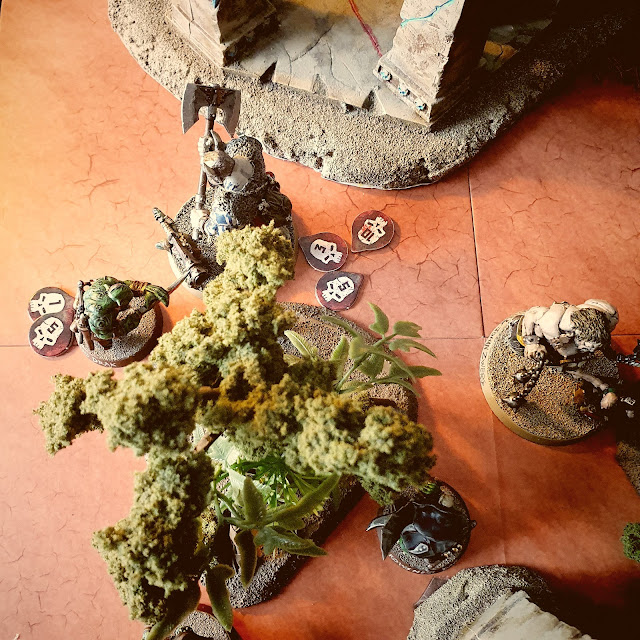 Skargat the Tyrant bullied his way through the crowded pirates to get to the Baron. 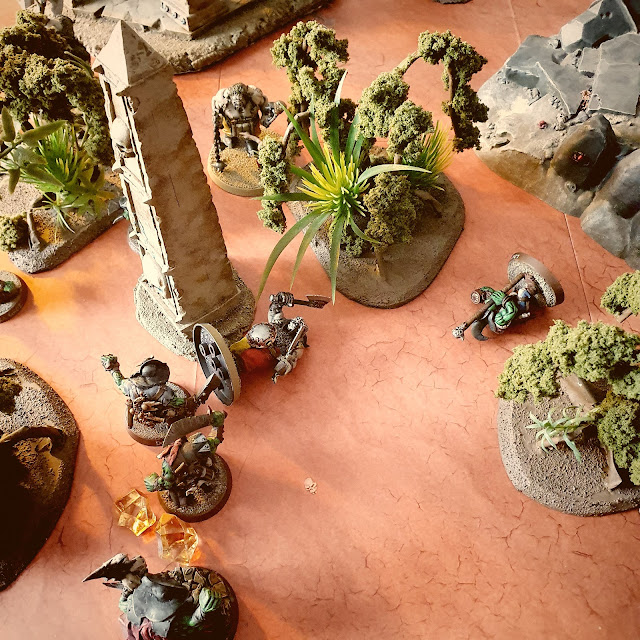 Leaving Uzzog dazed and winded in the ocherous dirt. 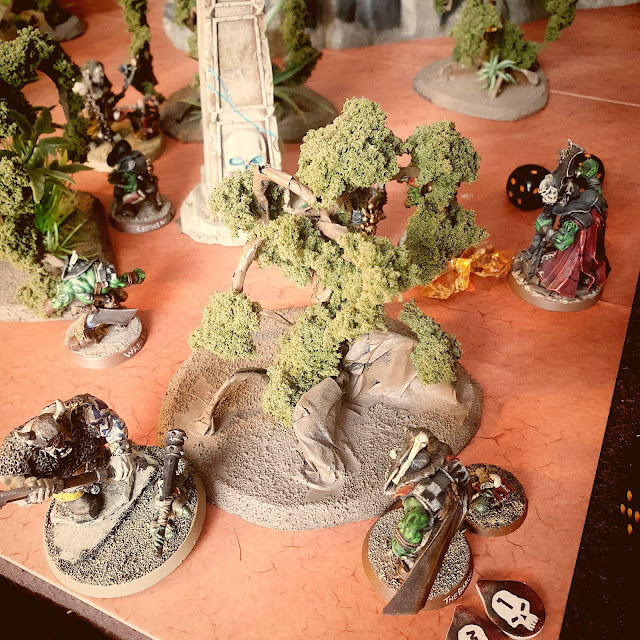 Will a bellowed war cry the great Ogor chief charged through the trees and slashed at the Baron with his colossal axe. The moustachioed explorer ducked under the jagged blade and leapt back, out of the way. 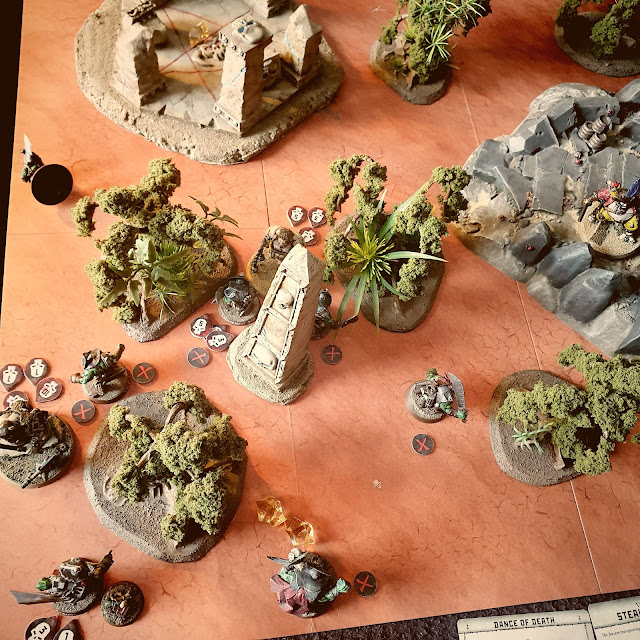 Cargo the pirate Maneater fired his oversized blackpowder gun at the Baron, but the shot went wide in the howling storm. 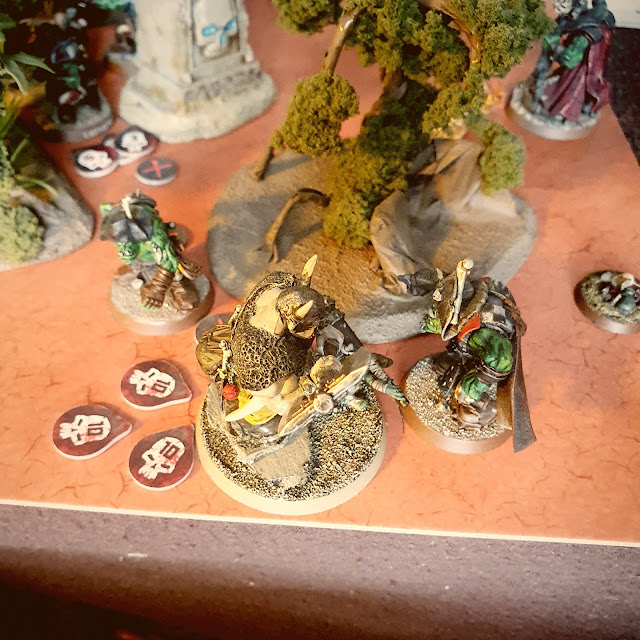 The Baron laughed and stepped in, under the Tyrant's guard, and planted a hefty iron-fisted punch on the monster's chin.
~ ⦽ ~ 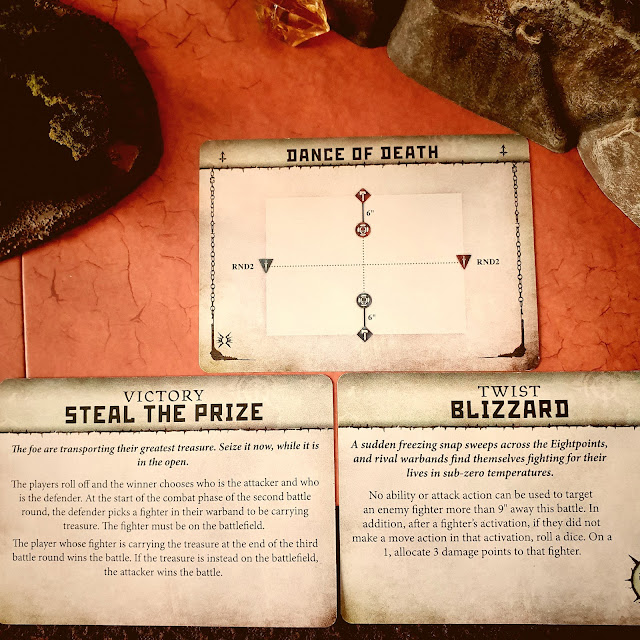 Deployment: Dance of Death
Victory: Steal the Prize
Twist: Blizzard
I realised pretty quickly that it was going to be really hard work to fight the Ogors on their own terms. They have SO MANY WOUNDS that taking one down was going to require the combined effort of many orruks. So I tried to play to the Bonesplitterz strength and used their potentially huge movement to play cat and mouse. I did my best to avoid fighting more than one Ogor at a time, and tried to keep the Baron out of harm's way as much as possible after he arrived on the table at the start of turn two.
It worked pretty well, especially when Viktor rolled a handful of ones for the attacks at the far end of the last-gasp Tyrant charge!
A win for the Cleavermaws and the Stormdance Reavers!
~ ⦽ ~
The campaign started on 29th June, and runs for five weeks, so now is the perfect time to join!
Turn 1 map of The Bleed: 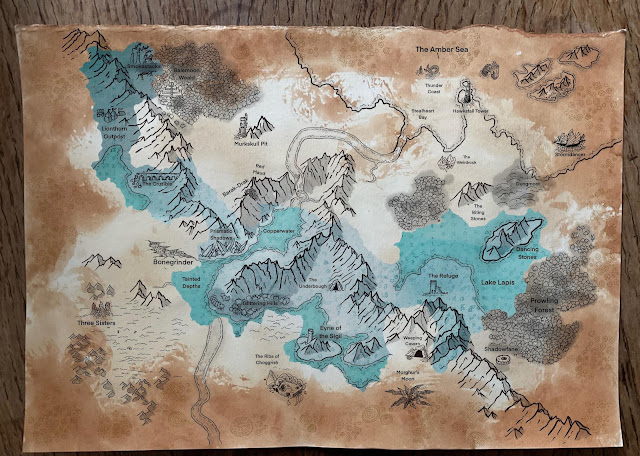