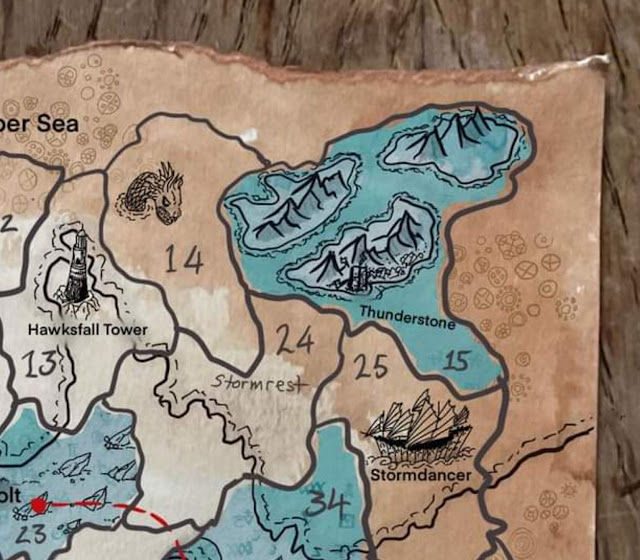 Continuous rumbles of thunder rolled back and forth across the the waters of the Kaleidoscopic Sea. The noise echoed off the cliffs ahead of the Leaky Bukkit as the small sky-boat skimmed above the waves. The little skiff was sailing on Kaptain Mogrum's orders, on a bearing from the Black Ark Stormdancer toward the aptly named Thunderstone: a towering pillar of copper-infused rock, visible for miles at night, that loudly crackled and arced with a near constant lightning storm around it. Kurbak and his small crew passed through the Bleed and crossed from Ghur to Chamon. The Leaky Bukkit creaked and complained as it pulled through strange geometries.
They set down on a wide ledge, and anchored the Leaky Bukkit there securely. There were crudely carved steps cut into the cliff face. 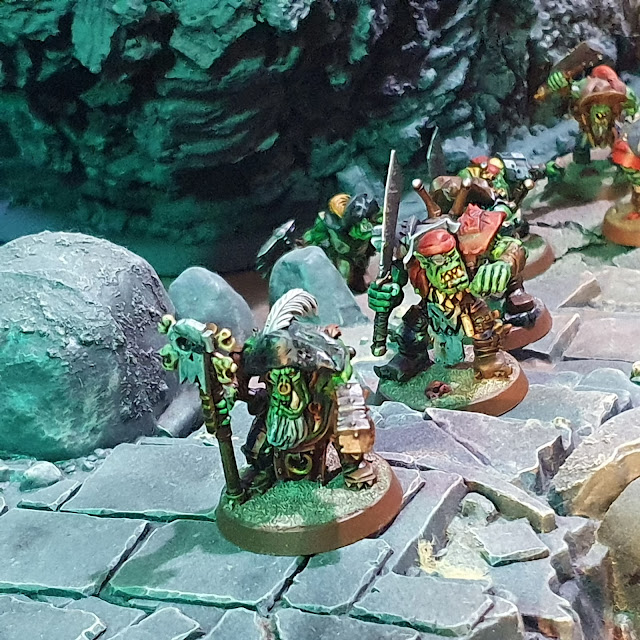 Kurbak led the way up the steps.
"The Thunderstone is right famous around these parts ladz." he said between huffing and puffing his way up. "There has been more than a few wizards what tried to harness its power and blowed themselves to smithereens." he chuckled at the thought.
"I imagine they was not careful with the thaumaturgical remunerations?" suggested Mainstay, just behind him.
"Aye, that or they didn't draw the proper hexagramatical wards. Which they is easy to draw wrong you know." said Fender Grak, scratching his goatee thoughtfully. 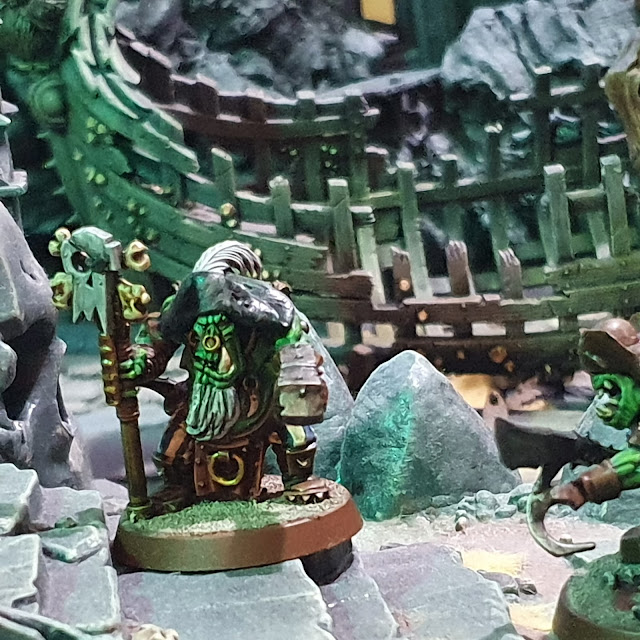 As they neared the top of the cliff they passed a rotting shipwreck, that caught their attention for a few minutes. The pirates cast a professional eye over the hulk, looking for spares and materials that they might find useful. The Cleavermaw was always in need of repairs so the habit of stripping anything portable was deeply ingrained into all of them. 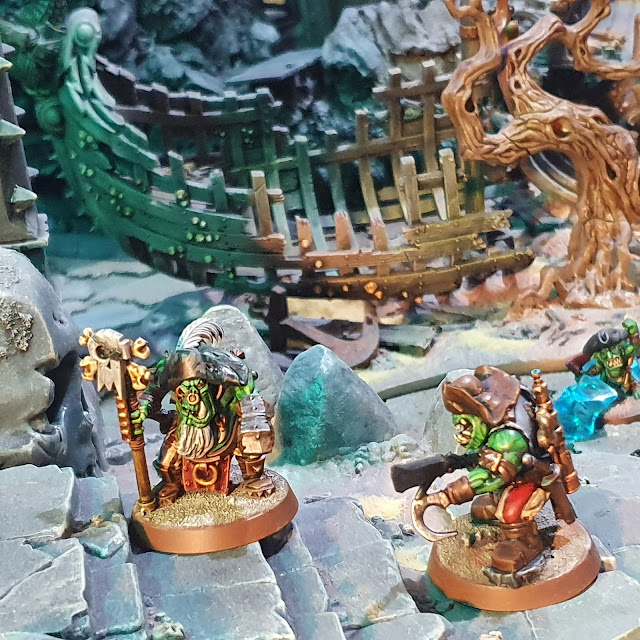 Kurbak waited impatiently while the crew picked over the wreck. It was clearly ancient and it had deteriorated badly exposed to the elements. There was no rigging or sailcloth and the timbers were useless, and there was definitely no treasure to be found.
They set off again and the conversation turned to the likely causes of the shipwreck, and how it came to be so high up the mountain. 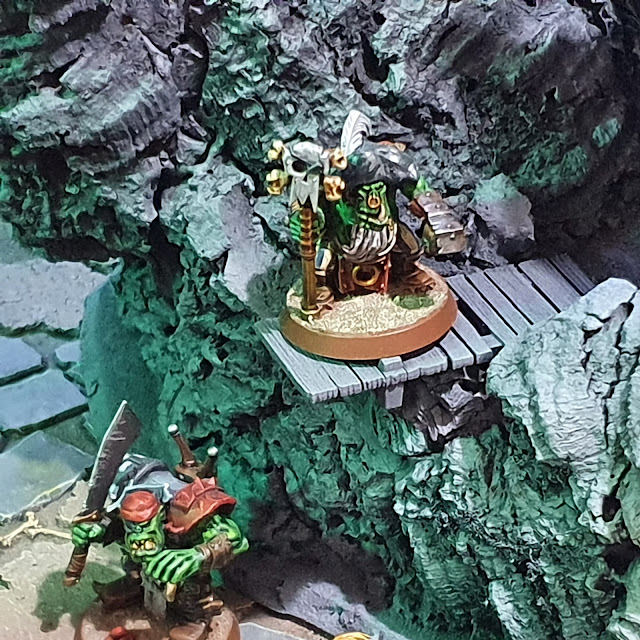 Mainstay helped Kurbak climb up onto a broken wooden bridge near the cliff top. From that vantage point the wardokk was able to see that they were not alone on the island: another crew was there ahead of them. 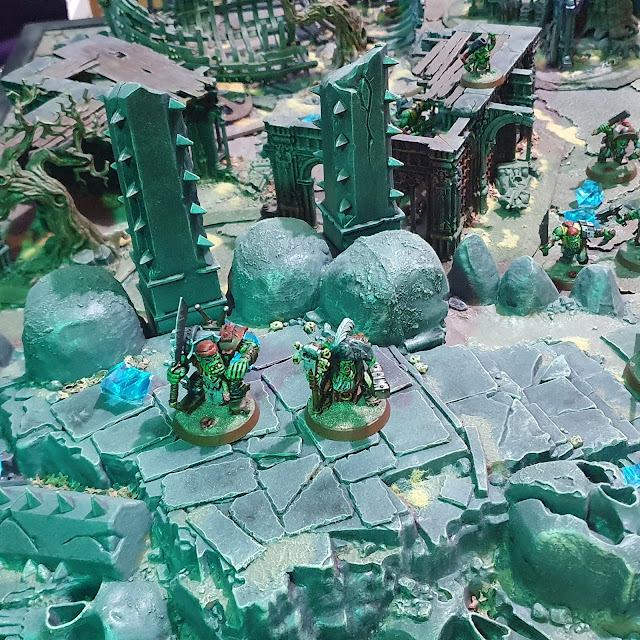 The Cleavermaws headed toward them. The orruk pirates spread out into three groups, so the newcomers wouldn't get the drop on them.
As they drew near they recognised the new crew as Black Ark Corsairs - ostensibly allies while they explored the Bleeding Wilds. 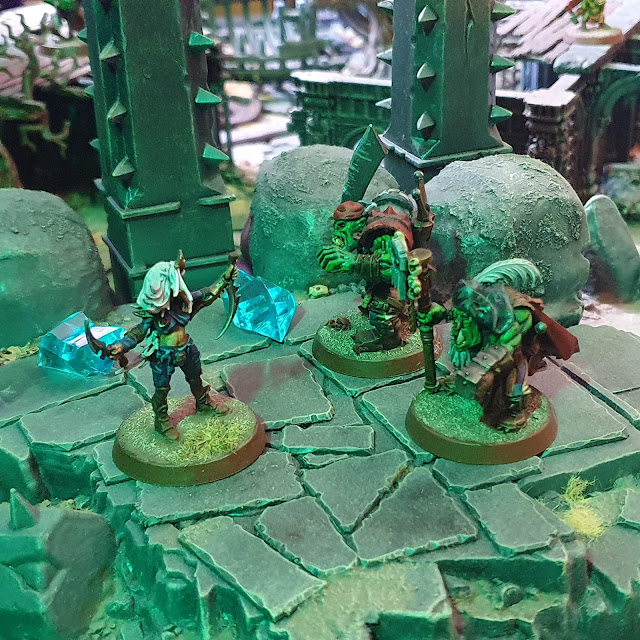 The leader of the the Corsairs approached the orruks. She did not seem pleased to see them.
Posted by WarbossKurgan (Saul) at 15:41