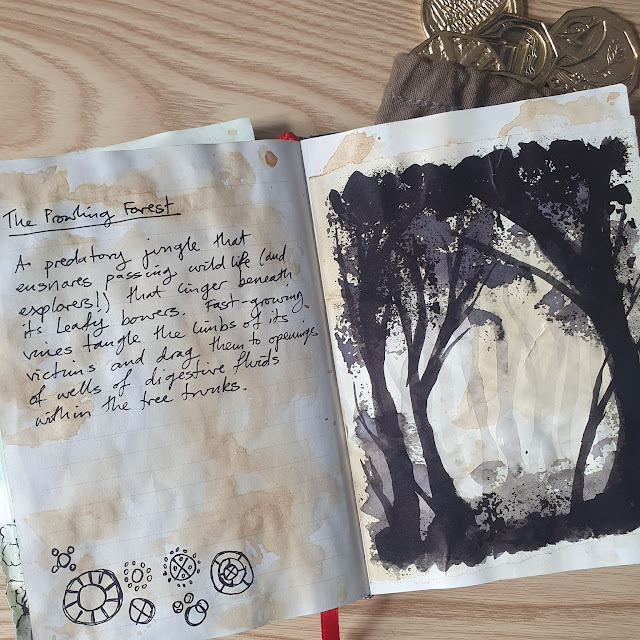 "Them again? Why do we keep meeting them?" hissed Kaptain Mogrum as he and his orruk pirate crew peered through the trees at the Arcanites searching the clearing ahead.
Lost Uzzog grinned sheepishly and shrugged - nodding at the thaumaturgic compass, as if that was to blame and the answer to everything.
On the northern edge of the Prowling Forest, where the trees were still widely-spaced and less aggressive, the Cleavermaws had set out to explore again, but once more they stumbled upon Ak'glar Xamolomax, a powerful Ogroid Thaumaturge, and his coven of Arcanites.
"So. Do you think he's got it then?" said Mogrum, turning to face the navigator. Uzzog looked even less comfortable than before.
"Yeah, it looks like it Kap'n. Whenever he moves the compass follows him like. So it is either him what has it, or he's a might more powerful wizard than I had thought of him before." or both, he added to himself.
"Oh, he will be powerful alright, and no mistake!" said Wrekka quietly to Ropesend. "He'll be like to transmute us all into soup if we're not right careful."
"Yaaargh!" said Ropesend.
"Transmute? He won't be transmuting anyone!" said Crowsnest, a little too loudly. "He will be conflagrating us for sh...." he went suddenly quite as he realised the Kaptain was looking right at him. He could tell, even behind the mask, that there was not a happy look on his face.
~ ⦽ ~ 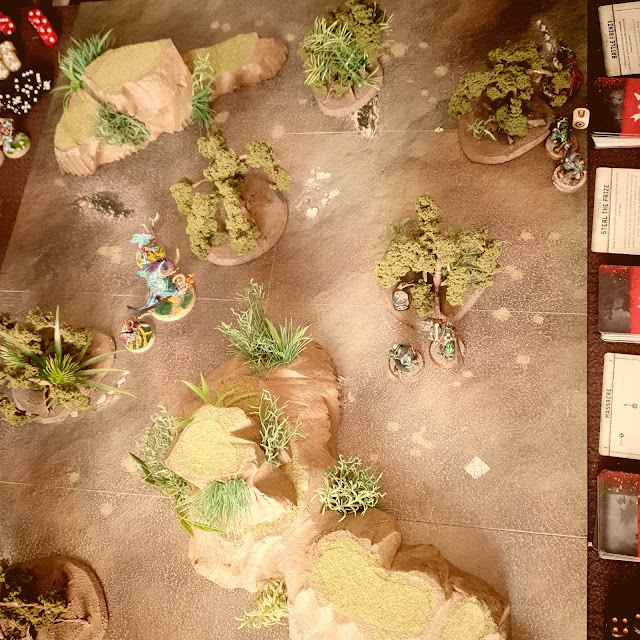 The Cleavermaws were scattered when they picked their moment to attack. They rushed forward and regrouped as they ran, forming up around the Kaptain. 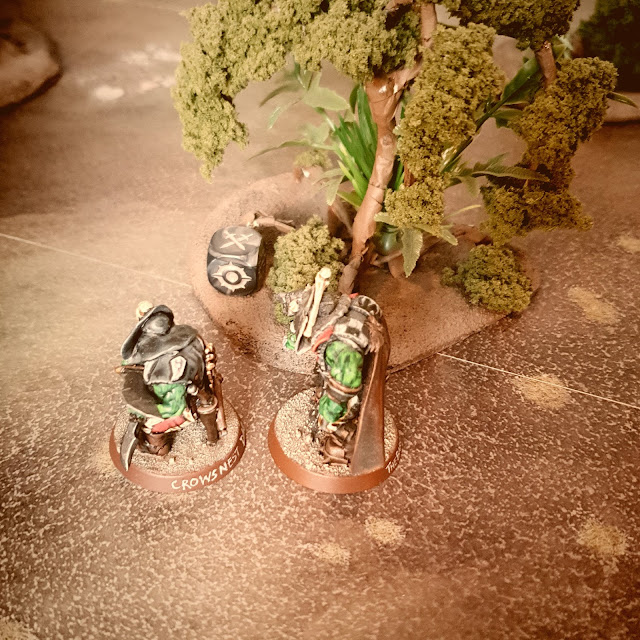 Apart from the Baron, who had other ideas... 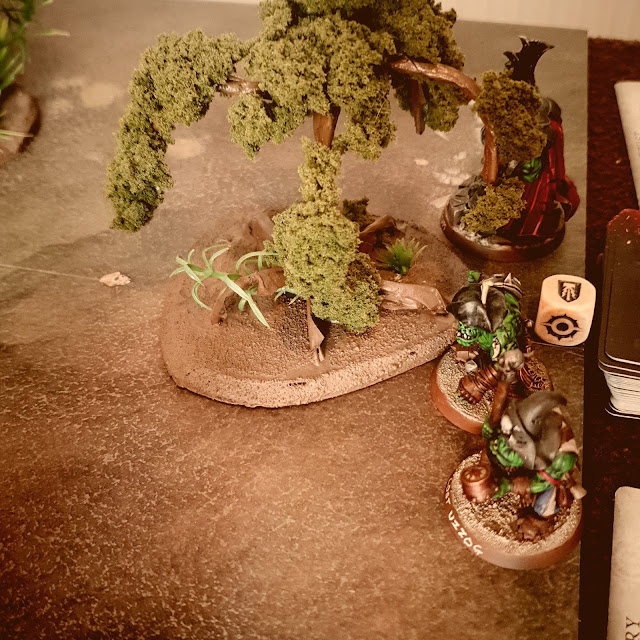 Uzzog focused his power through his staff and the tattoos on the pirates' skin squirmed and energised. 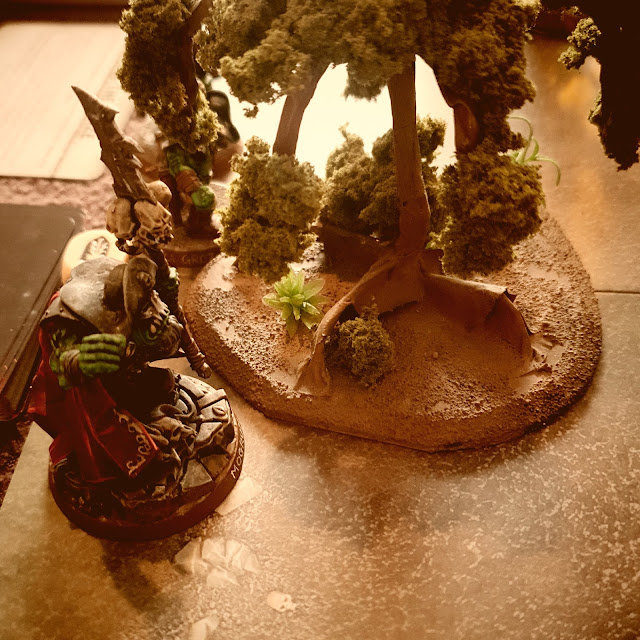 Mogrum marshalled control of the magic coursing through him - well, as much as he could at least. 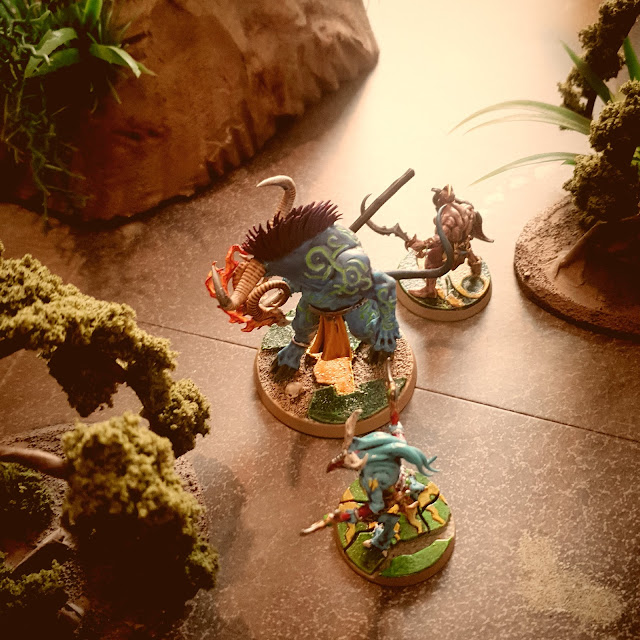 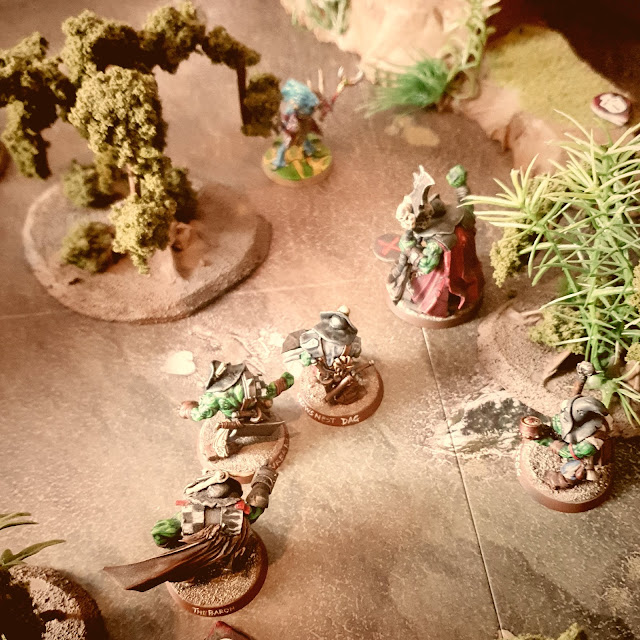 As the orruk pirates gathered around the Kaptain... 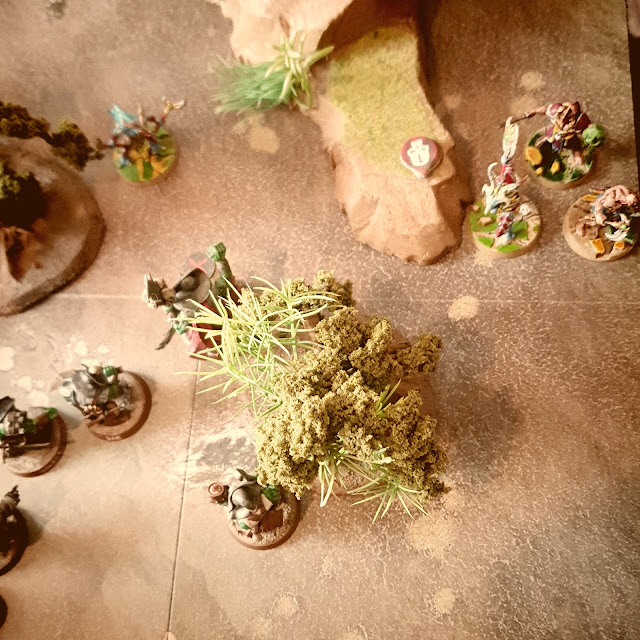 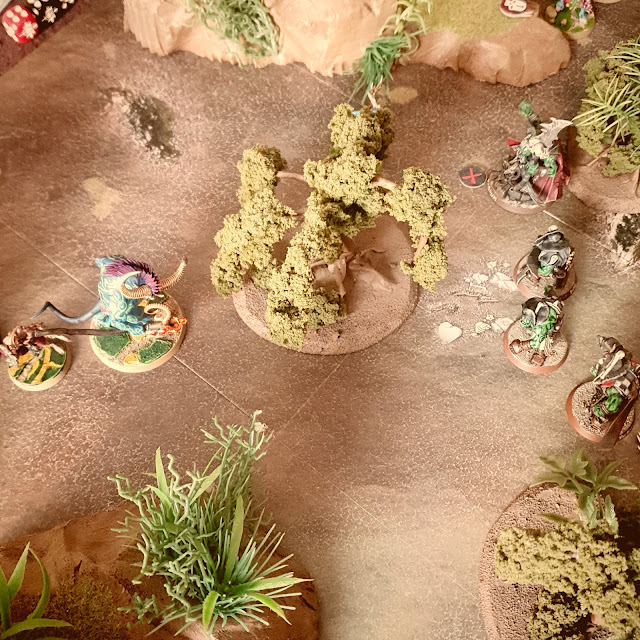 Ak'glar Xamolomax and the Baron locked eyes on one-another: The Baron charged! 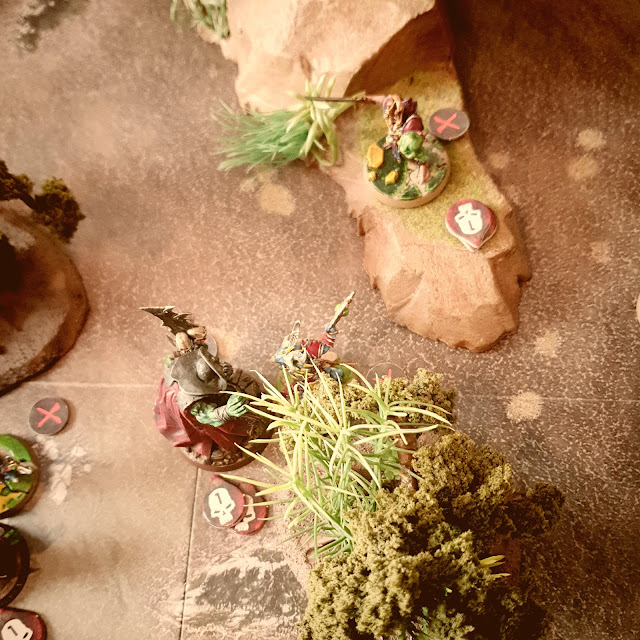 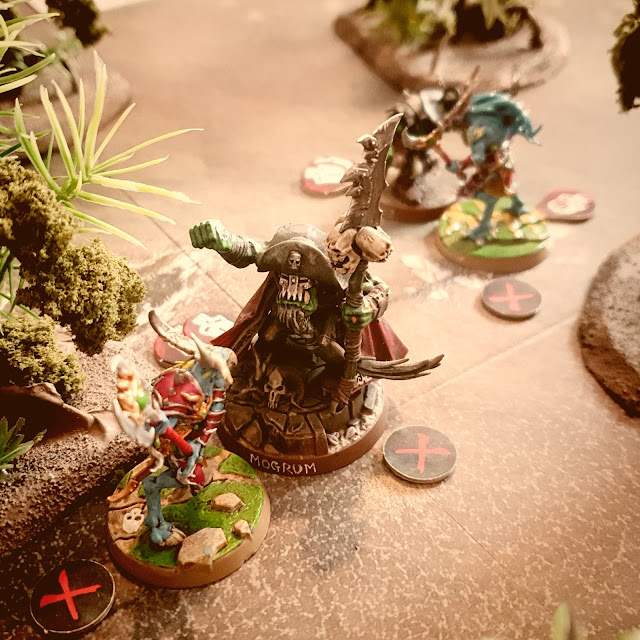 The Kaptain punched it hard on the beak. 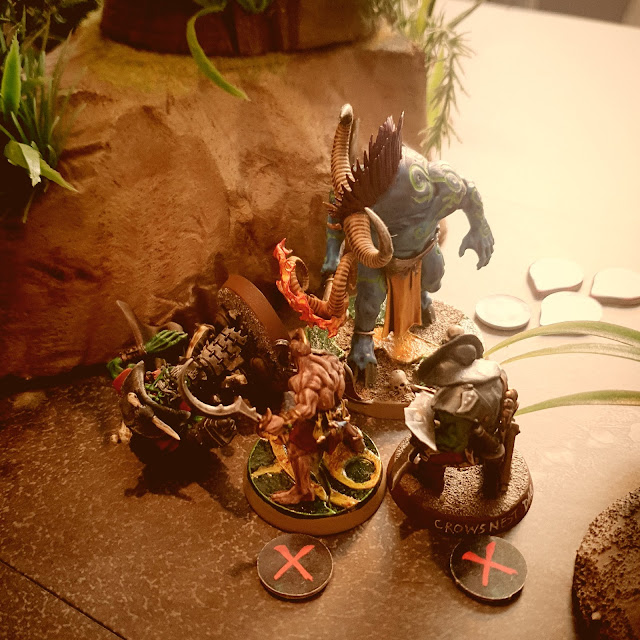 Crowsnest Dag enthusiastically followed the Baron, who landed a punishing blow on the Ogroid with his steel-gauntleted fist.
But Crowsnest was then horrified to see the big orruk slammed against the ground by the brute strength of Xamolomax, augmented through sorcery, in his counter-assault. 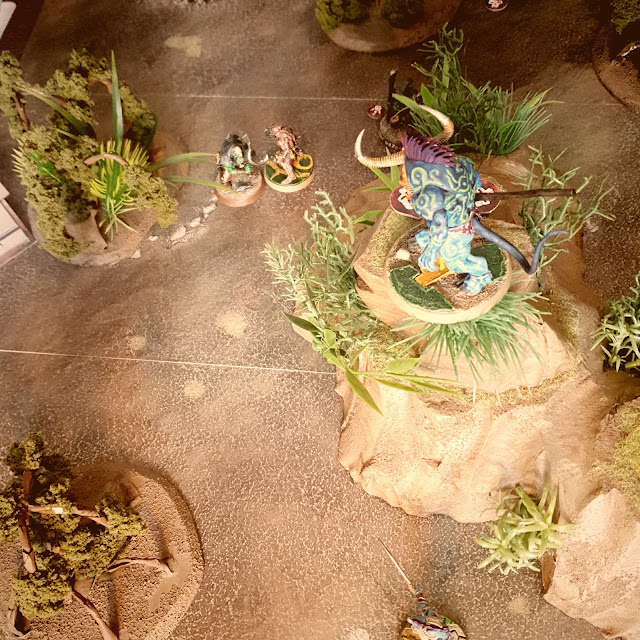 The air shimmered as Ak'glar Xamolomax deftly skipped up the side of the rocky hill, out of harm's way: Trickery and guile were his favourite weapons. 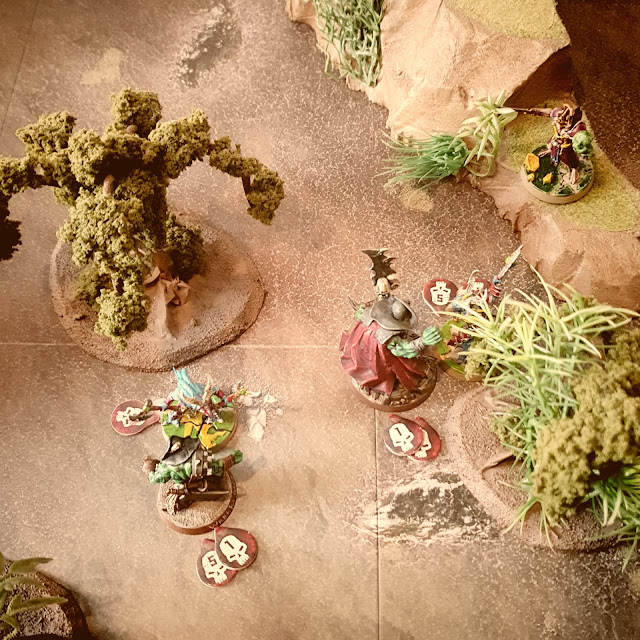 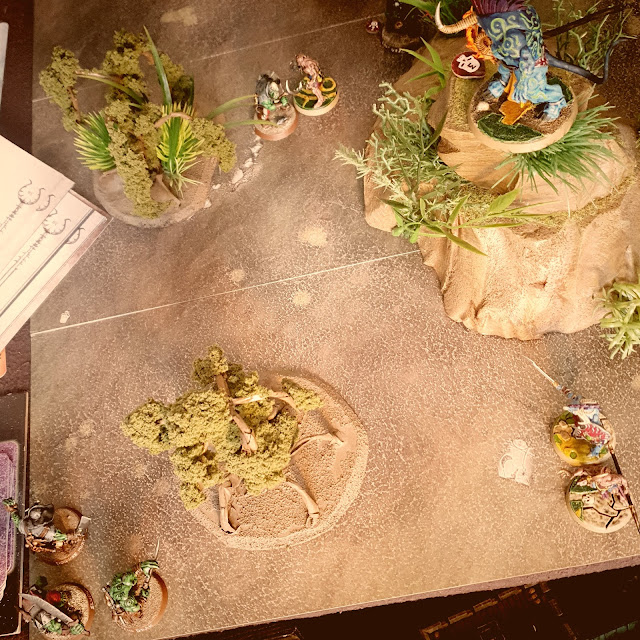 And Sludga, Ropesend and Dogvane Murt arrived to help. But none of the Cleavermaws could come close to the Ogroid Thaumaturge, his magic was too quick and too subtle for them that day.
~ ⦽ ~ 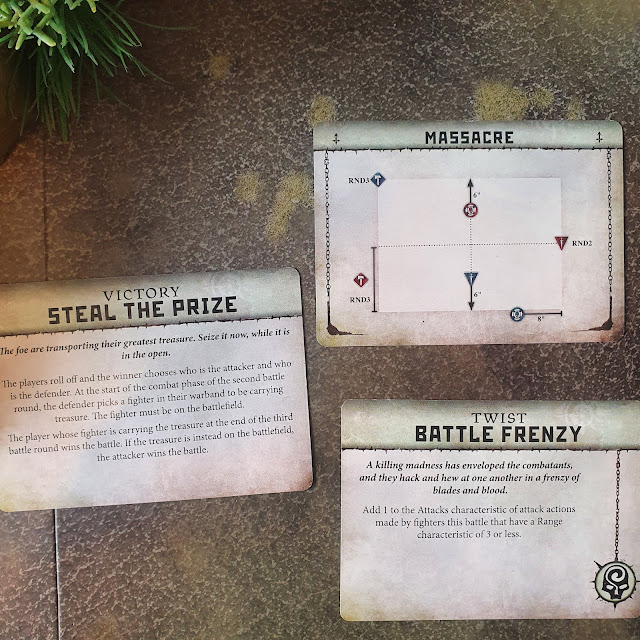 Deployment: Massacre
Victory: Steal The Prize
Twist: Battle Frenzy
Another warm-up game ahead of the campaign. I made a couple of mistakes, I wasted my Ability Dice and of hedged my bets about which model Viktor would pick to be holding the the prize in Turn 2. I should have guessed it would be the Ogroid! But Viktor easily won this in the third turn; there was just no way I could catch the Ogroid Thaumaturge, when he ran up the hill out of reach.
Another fun and satisfying game none-the-less!
~ ⦽ ~
The campaign starts on 29th June, so now is the perfect time to join!
Posted by WarbossKurgan (Saul) at 12:42