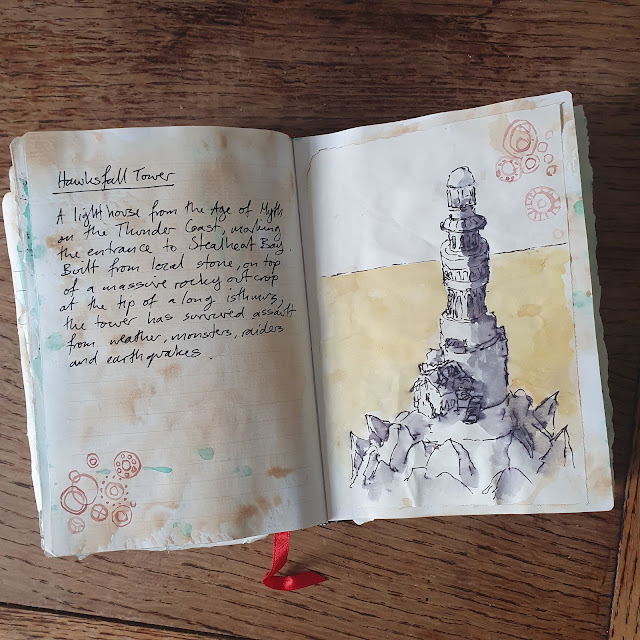 The Cleavermaw rattled and groaned in protest as it passed through the Bleed, the timbers complained as they were twisted by pressures they were in no condition to withstand. The ship pitched violently up and down several times, sending a few orruks sprawling across the deck. Something fell off and tumbled away through the air.
The colour of the daylight changed subtly, from cold and blueish to a warm golden honey hue. The orruk pirates on board grinned at each other, one or two of them giving knowing looks.
Ropesend Drak said "Yaargh!"
"Was to be expected, as we pass over the threshold." said Wrekka Groz, with a great deal of confidence, as he hauled on a rope to secure a stolen cargo.
"Aye," said Dogvane Murt "the thaumaturgic spectrum differential is about what I thought we'd get and all."
"It weren't spectrum differential, it were a prismatic-luminary effect." grumbled Crowsnest Dag.
"Which you is jumbling your phenomena mate!" said Wrekka with a slight air of superiority.
Crowsnest drew a blade, but Sludga was stood right behind him. The big orruk gave him a tap on the back of his head with a meaty fist to remind him to get on with his work.
"Spectrum differential? Pah!" muttered Crowsnest  under his breath as he went back to his task.
~ ⦽ ~ 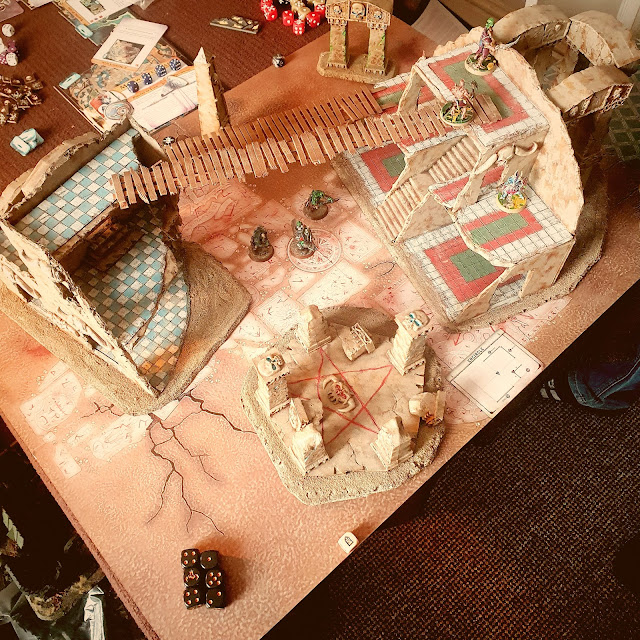 In the distance a lighthouse was just visible through the haze. The crashing of waves was a distant rumble, but it was clearly not far away.
The Baron and a couple of deck hands ranged ahead of the rest of the crew, they found what looked like a fairly recent campsite amongst ancient ruins. A firepit was still smoking and there were signs of a struggle around it. 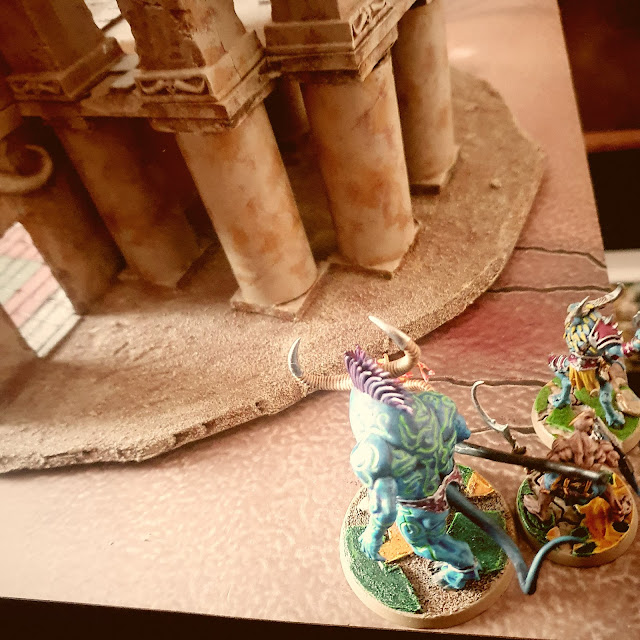 As the pirates investigated they suddenly realised they were not alone. They had been too focused on the campsite to notice the warband that attacked it was still in the area! 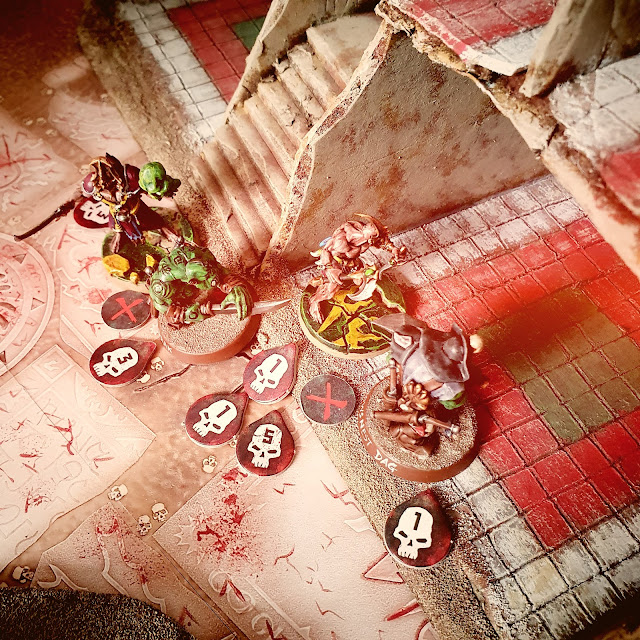 The Baron raced ahead of the others, he headed straight for the leader - he was an old friend! Crowsnest and Ropesend did their best to keep up, but a pair of kairic acolytes jumped down from the ruins onto them! 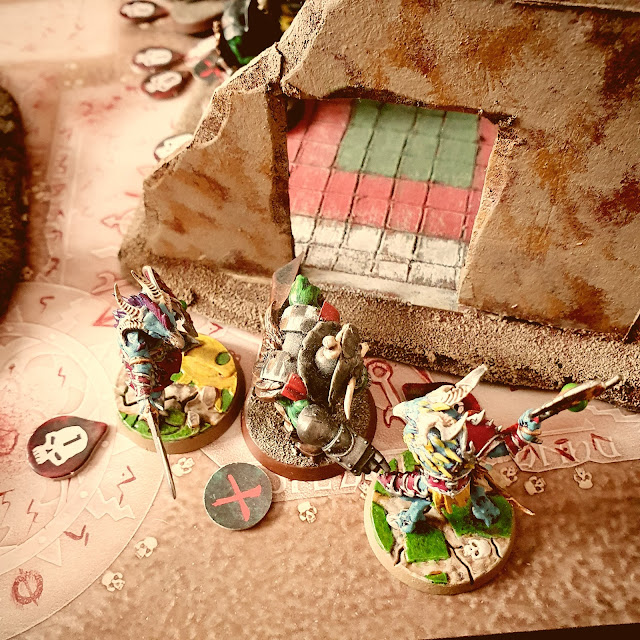 Two tzaangors pounced on the Baron. 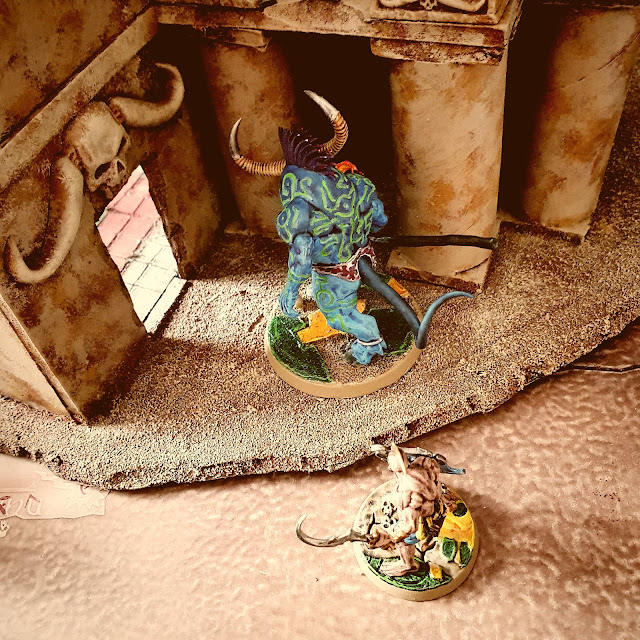 The Ogroid leader and another acolyte approached. 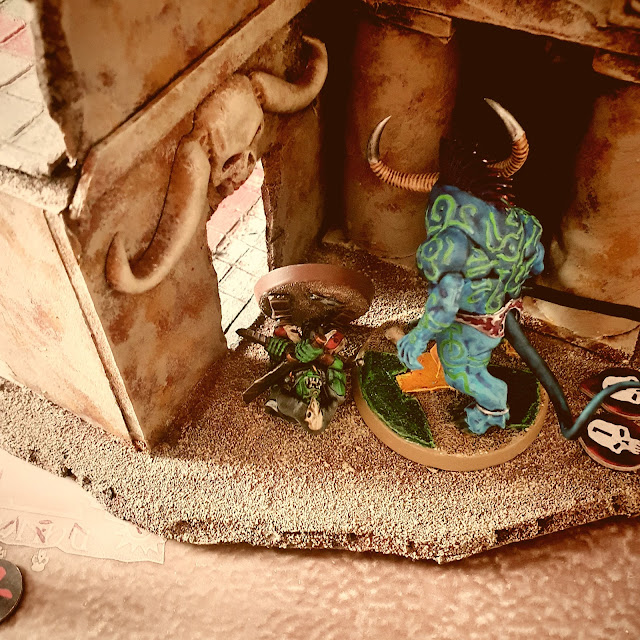 Crowsnest piled through the doorway, straight onto the Thaumaturge's glave! 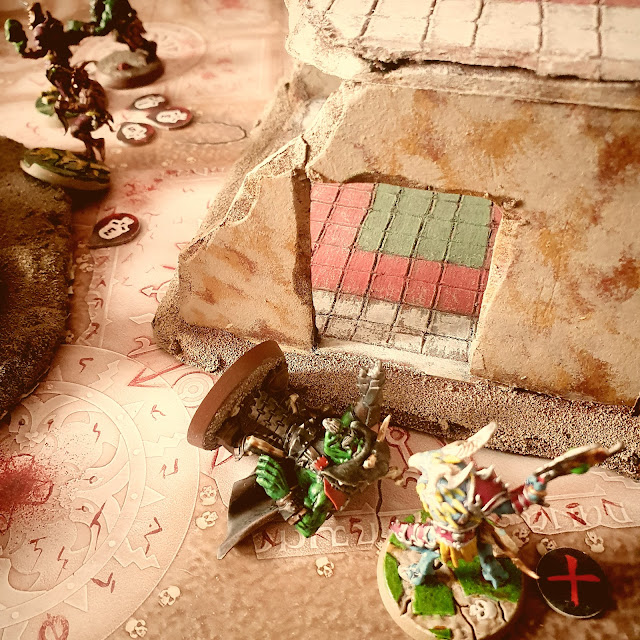 The tzaangors felled the Baron and moved on to the rest of the crew. 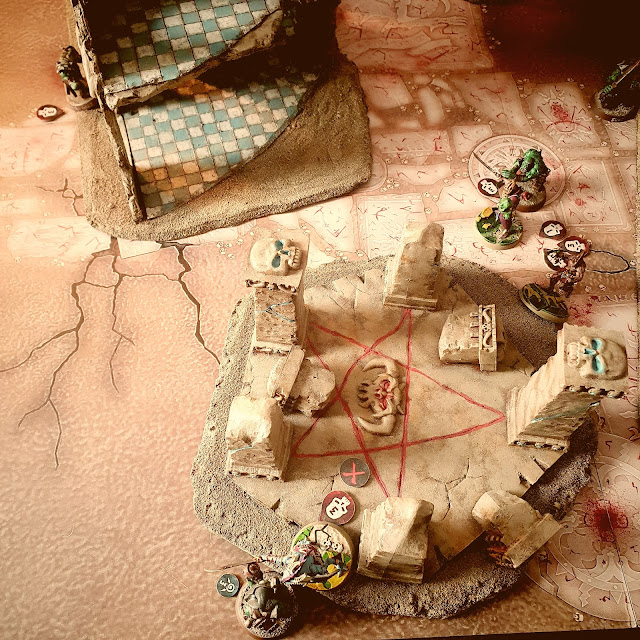 The others arrived to find the fight raging, both sides were already blooded. 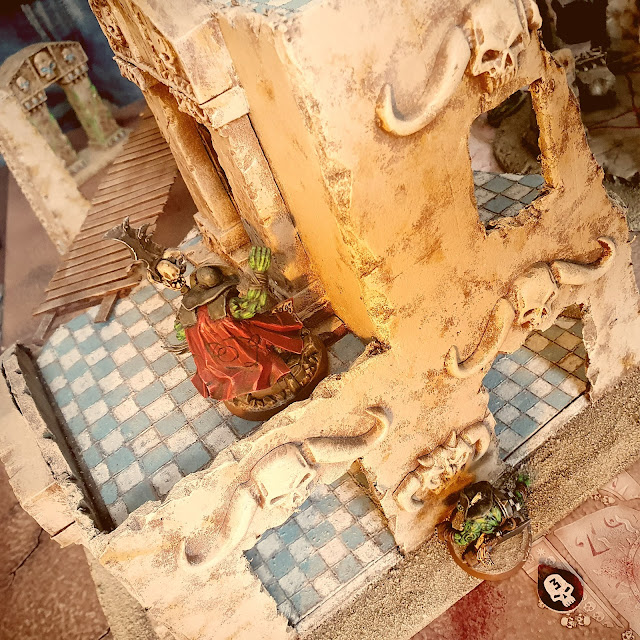 With Wrekka standing guard, Mogrum took cover in the upper story of the building where it looked like an expedition had been ambushed in their sleep. The floor was littered with cooking gear, unpacked bedding rolls, lanterns and bags.
While the two warbands pulled back and shouted threats and insults at each other outside he opened a couple of the backpacks that lay nearby. There were clothes and food inside most of them, but one was significantly heavier - inside there was a leather-bound book, along with pens and bottles of ink and a number of letters tied into a bundle. Behind his mask he grinned and stashed the bag for investigation later.
~ ⦽ ~ 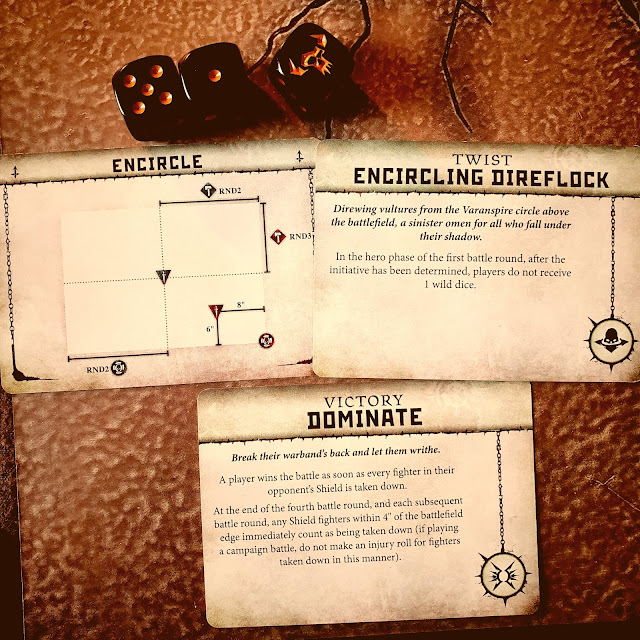 We only managed to play 2 battle rounds before we ran out of time but it was clear to both of us that unless we played for at least 3 more rounds it would end in a draw. Neither of us was in a position that would enable us to take out the three models in our respective Shields, with 50 to 60 wounds in total, in one round.
It was an interesting battleplan but one that allows (and definitely needs!) a lot of time, without the usual 3 or 4 round limit. A bit too much for a lunchtime game!
Deployment: Encircle
Victory: Dominate
Twist: Encircling Direflock (very thematic for Ghur!)
~ ⦽ ~
The campaign starts on 29th June, so now is the perfect time to join!
Posted by WarbossKurgan (Saul) at 10:08