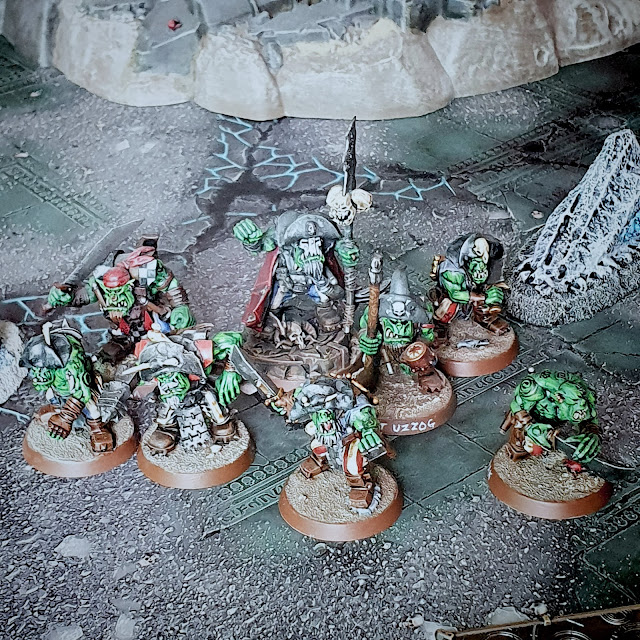 The Cleavermaw touched down in Oxidisa, on the coast of the Kaleidoscopic Sea. The blueish light of Silverside reflected off the blue-green crystalline shards and teal rock scattered on the shore. The Kaptain looked at Lost Uzzog, who shrugged. Mogrum sighed and shook his head.
"Roight." he said with more certainty than he felt "Let's have a look around and see if we can find anything interesting. Krashhart, you and Kurbak take your ladz and go that way," he pointed with his magic harpoon "we'll go this way, and we will meet back here tomorrow."
Krashhart shook the Kaptain's hand and slapped him on the upper arm.
"Good luck mate, I'll see you in a bit then!" he said with a genuine and good-natured laugh.
"You too lad." said Mogrum and returned the handshake warmly.
The crew were surprised. They looked at each other, unsure how to process the new warmer relationship. A few shrugged and others frowned. This was was going to take some getting used to after all the arguments of the last few weeks.
Kurbak said goodbye to Uzzog and whispered "Keep an eye on the Kap'n, eh?"
Uzzog whispered back "Aye, and you that new lad. I don't trust him further than I can spit." 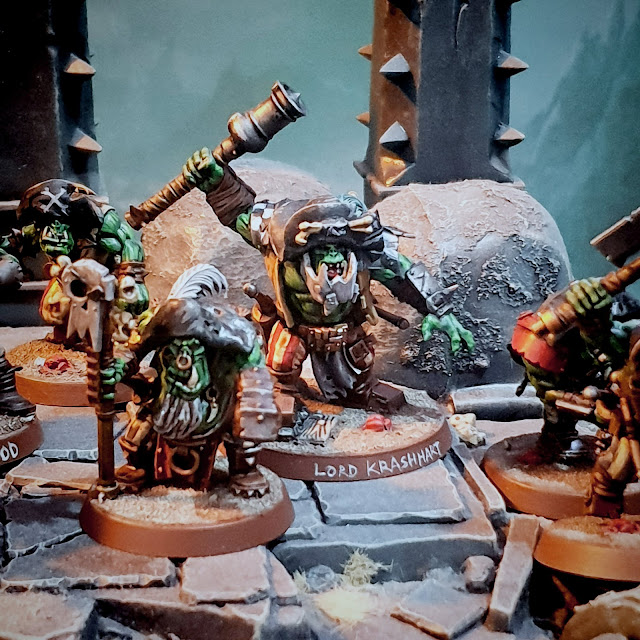 ~ ⦽ ~
Mogrum and the pirates walked for a few hours and came to a watch tower on a small rocky hill. Mogrum sent a few of them off to check the neighbourhood while he and Uzzog looked around inside. Wrekka Groz was left by the door as lookout, which was not a job he was suited to as it turned out. 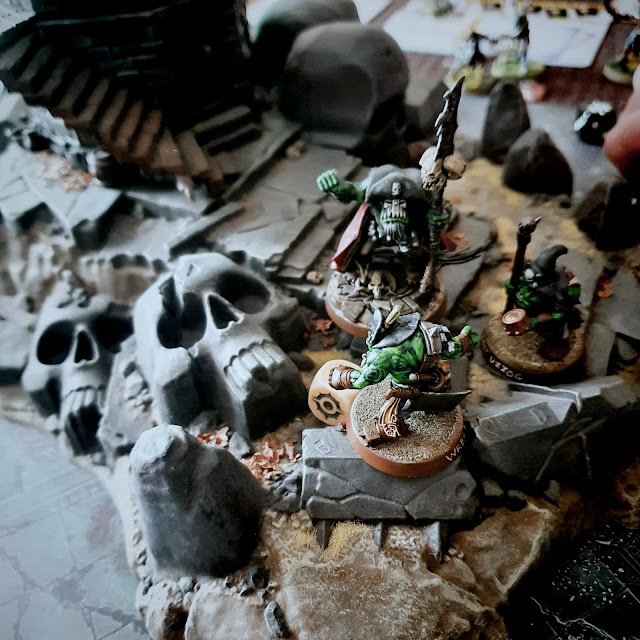 After about ten minutes poking around in the darkness of the tower's rooms Mogrum and Uzzog heard Wrekka Groz shouting. There was a band of blue creatures approaching. They hurried outside to see.
"Honest Kap'n, they just popped out of the air! They weren't here a moment ago." cried Wrekka plaintively. 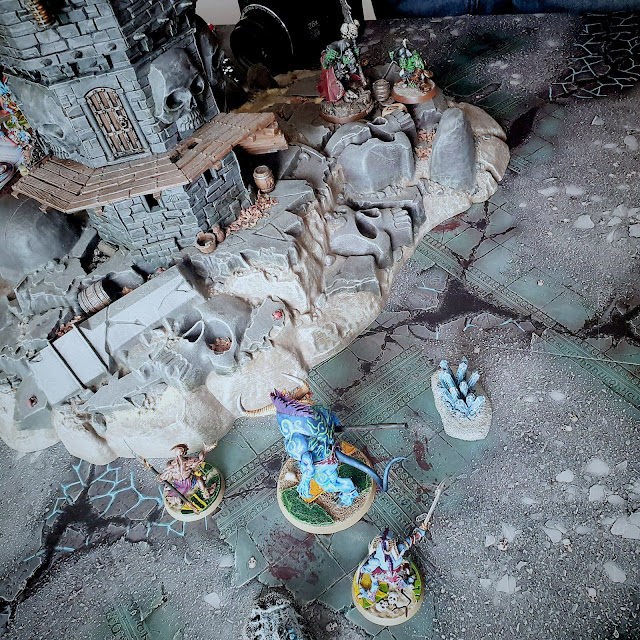 A massive Ogroid Thaumaturge and his band of weird looking followers stood on the rocks below them, shouting a challenge.
"How dare you set foot in my tower, you filthy heathens!" the Ogroid roared. 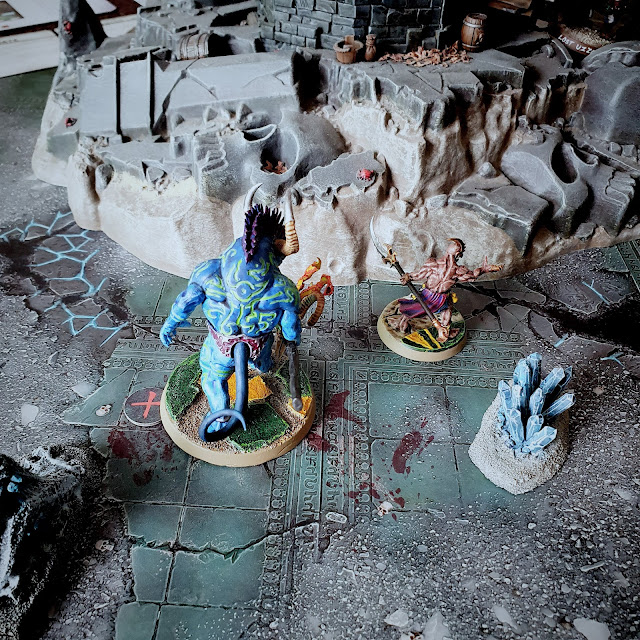 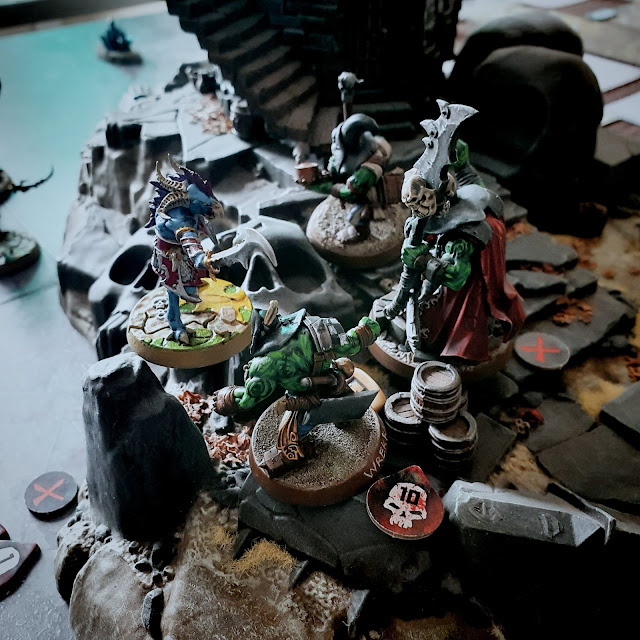 The Tzaangor charged and drove his blade into the poor orruk's belly. His screams alerted the exploring crew members who rushed back to find out what the noise was about. 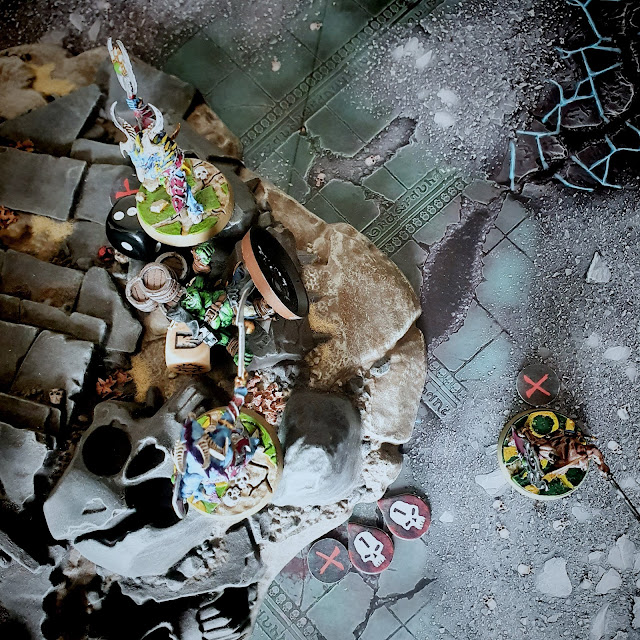 As they arrived, so too did more Tzaangor and Acolytes. 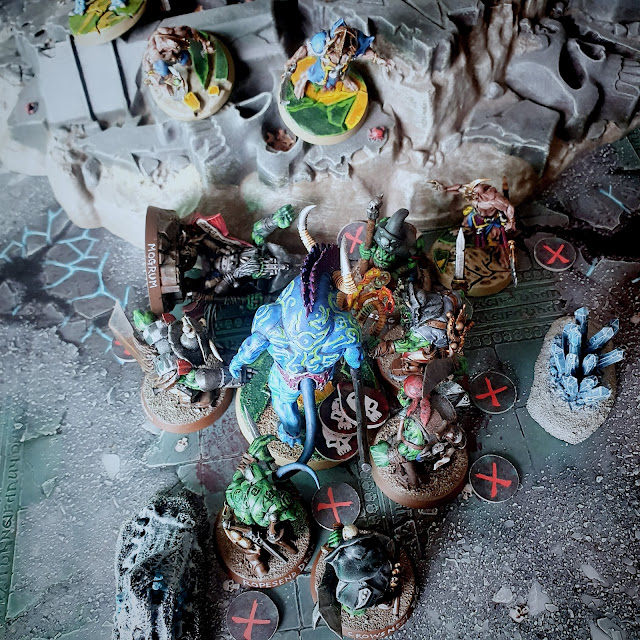 Kaptain Mogrum and Lost Uzzog sprinted at the edge of the rocky hill and jumped down, landing next to the Ogroid and joining the rest of the Cleavermaws who all charged at the huge blue beast.
But the Ogroid was ready for them and slammed Mogrum against the rocks, knocking the wind out of him and stunning him! 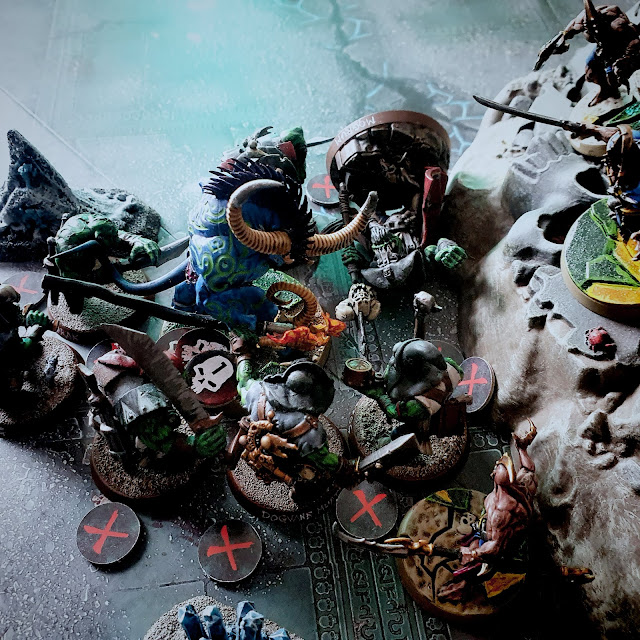 Lost Uzzog raised his staff and slammed it into the ground. A wave of energy pulsed through the pirates. Their assorted tattoos of fish, anchors, octopuses and maelstroms, writhed and animated on their skin for a moment, as Uzzog's spell toughened their flesh. The Wardokk smashed his staff into the Ogroid and the monster reeled back in shock at the force of the blow. 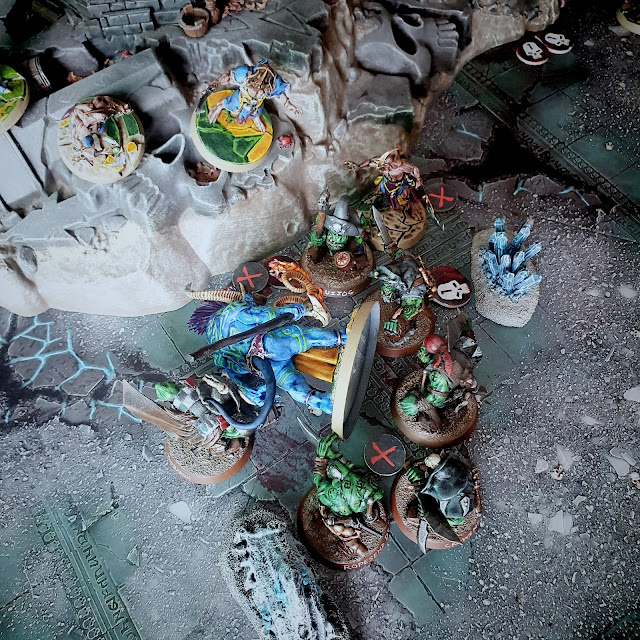 The other pirates were shocked - they had never seen such a blow from the Wardokk! But The Baron wasn't phased at all, he smashed his gauntleted fist into the Ogroid's chin and the giant dropped to the teal rocks like a sack of sand. 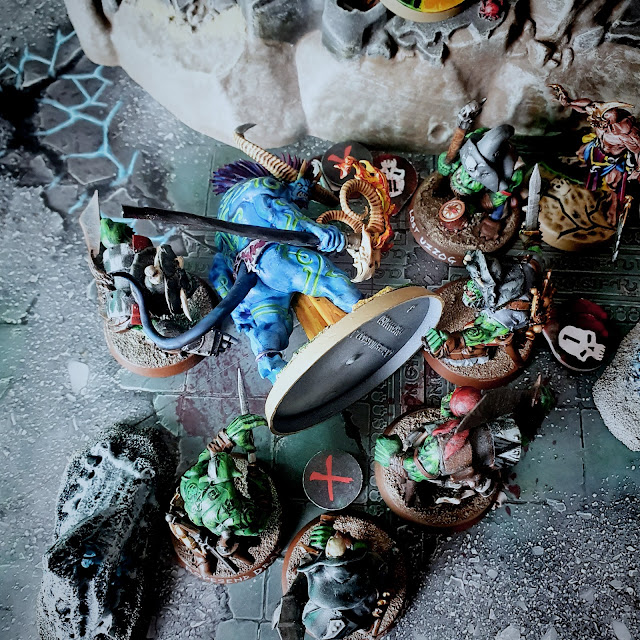 The orruks gave him no quarter and the rest of his warband fled. 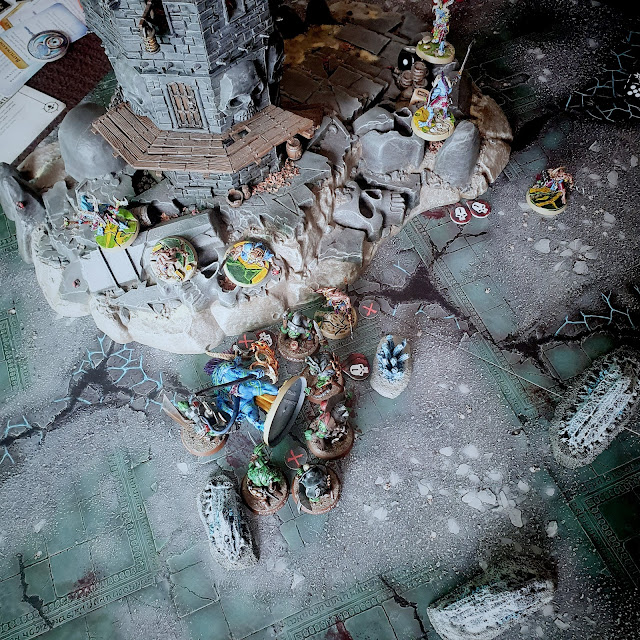 When Mogrum came round night had fallen and the crew had set up camp inside the tower. A fire was already lit and food was being served. The Kaptain noticed a bundle of papers in the corner, he made a mental note to take a look at them as soon as his head stopped swimming.
The rest of the pirates were in good spirits and soon horrible shanties were being sung. They were going to have fun here.
~ ⦽ ~ 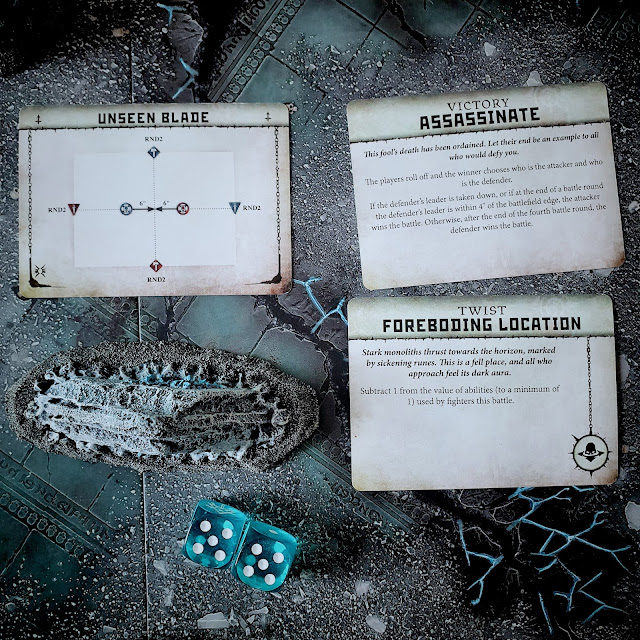 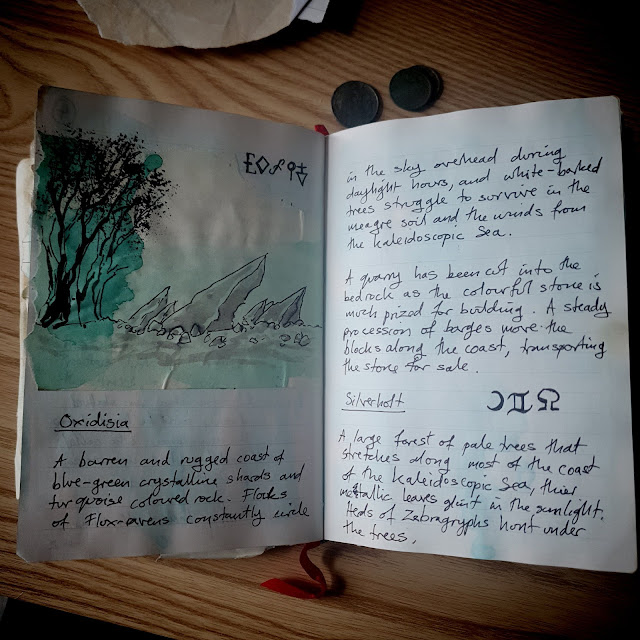