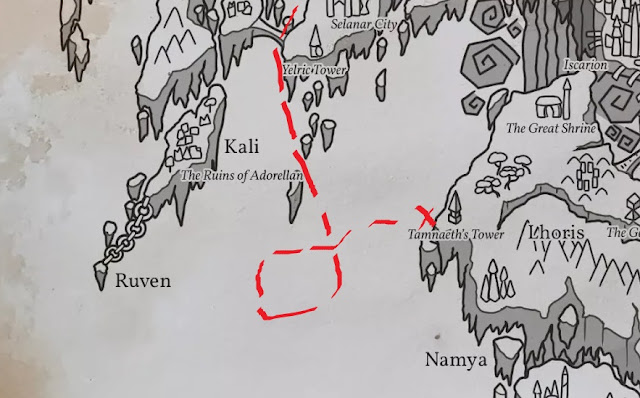 A Spark in the Twilight

The Cleavermaw sailed low over the forest, the tohnasai tree were just starting to turn yellowy-brown here, as summer edged into autumn. The wind was on their stern and the ship only had a scrap of canvas set, to keep their speed down. The Cleavermaws lounged about on deck - there was work to be done, but nothing urgent: the repairs to the hull needed materials they didn't have. Two orruks stood lookout, one in the crow's nest and one on the figurehead. The helmsman and Lost Uzzog were alone on the quarterdeck, watching the thaumaturgic compass more than their surroundings. The now-familiar rhythm of Tamnaeth's Tower showed strongly in the crystal dome of the compass.
As the sky slowly dimmed and twilight approached, the lookout at the masthead started out of his thoughts as a light twinkled on the skyline. He squinted at it for a moment then grabbed his spy-glass. He swept the horizon for a minute or two, then found the light again. Just above the trees against the darkening sky - it could be the running lights of a skyship, or maybe the cabin lights.
"Light-ahoy! Hard-off the starboard bow!" he cried.
The deckhands jumped to their feet and into the rigging, all eager to see what the lookout had spotted. The ship leaned a little, with their combined weight on one side.
Kaptain Mogrum came on deck and Uzzog briefly told him the news.
"Where's Mr Sludga?" the Kaptain asked.
"Ummm," said Uzzog, awkwardly "drunk again boss."
Sparks fizzed around Morgum's fists. One of the deckhands noticed, nudged his neighbour and whispered "Look out mate, kap'n's about to go Mork again!"
The news spread like wildfire through the crew and they all suddenly looked very busy and professional.
Mogrum took a deep breath and barked orders to prepare to come about and make more sail. When all was ready he gave the nod to the helm and the ship made a wide turn toward the distant light.
+ ⦽ +
After half a turn of the glass Mogrum called up to the lookout.
"Crowsnest?"
"Aye boss?"
"What d'you see?"
The lookout stared through the brass spy-glass again and called down to the deck.
"It looks like a long, thin aelf-ship kap'n!"
The crew's eyes sparkled piratically as they looked at one-another, grinning. An aelven sky-ship would furnish them with all the materials they needed to make the ship trim again. Even if there was no cargo aboard they would strip the timbers from her and patch-up the holes in the Cleavermaw's ragged hull.
If there was cargo (and in autumn that was most likely) then that would make a welcome bonus for everyone.
~ ⦽ ~ 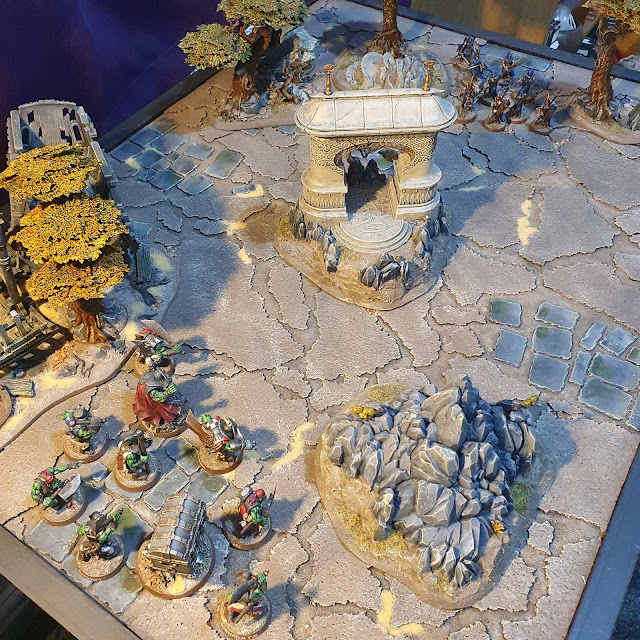 The aelven ship gave them the slip among the tiny metalith islands but Mogrum had a feeling he knew where they were hiding.
After making landfall on small island in the Ruven Gulf, off Lhoris, the Cleavermaws searched the coast and soon found the aelven crew hastily unloading their cargo. 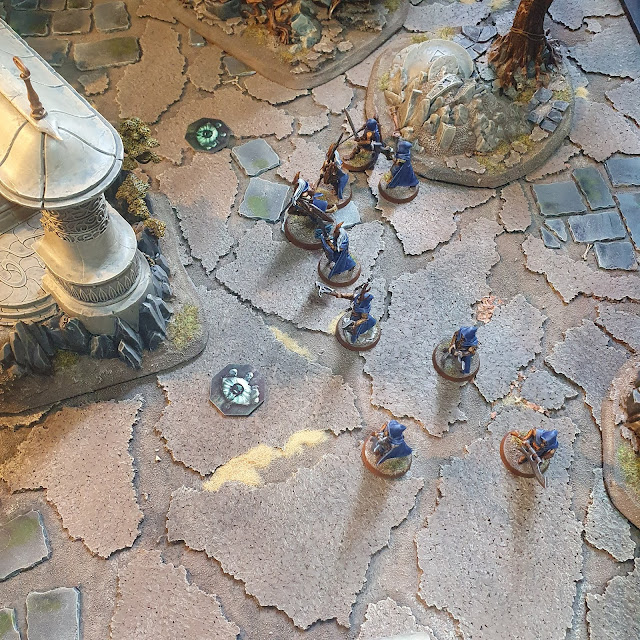 One of the Iscarneth shouted a warning to his company and they instantly grabbed weapons. 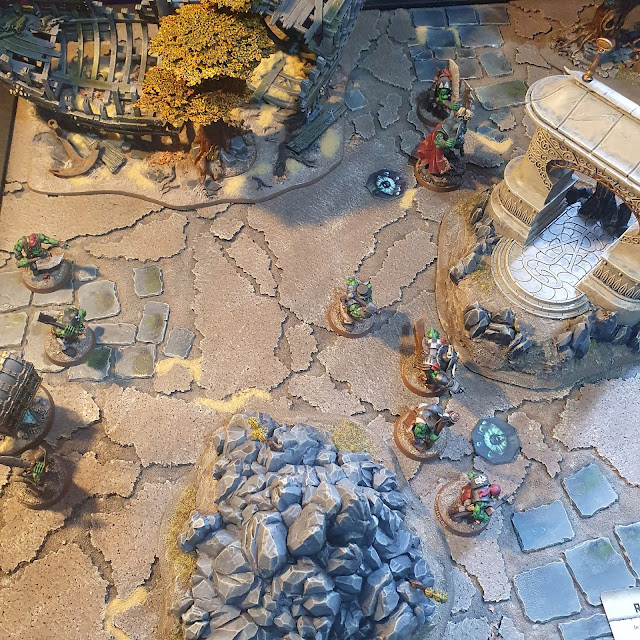 Several of the Cleavermaws fired their heavy overloaded pistols and the air was filled with black-powder smoke, but the autumn winds quickly swept it away.. 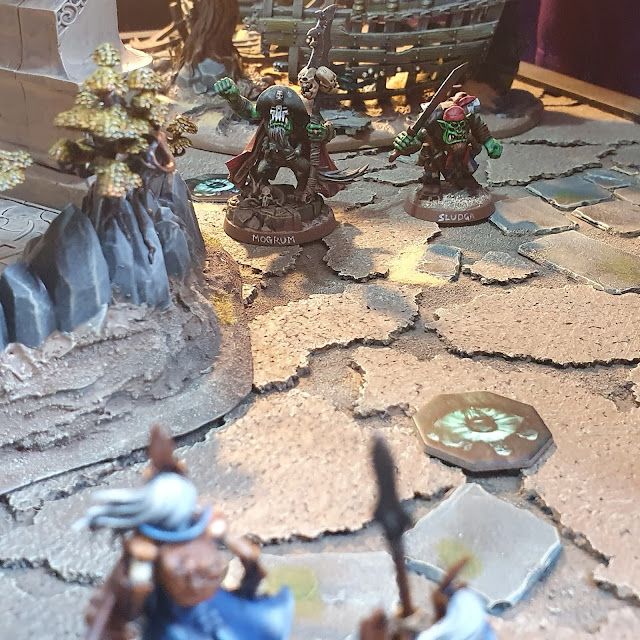 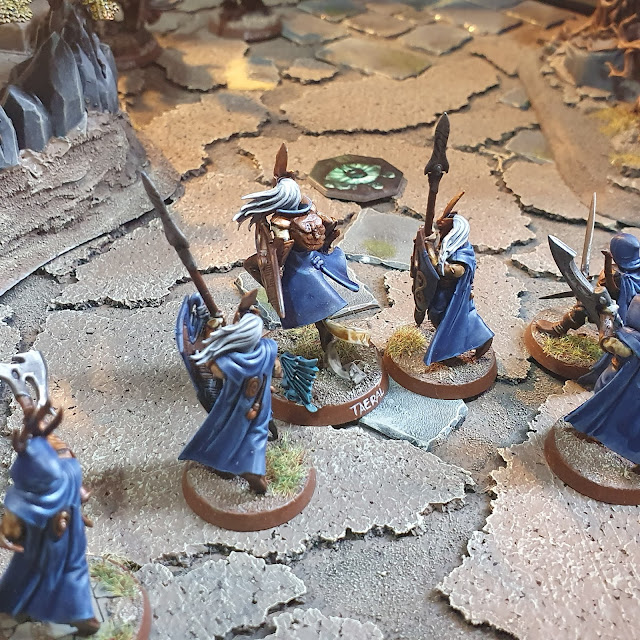 The Iscarneth leader Taeral, a Nomad Prince, pointed at Kaptain Mogrum and spat insults; haughtily swearing that all pirates would be put to death. 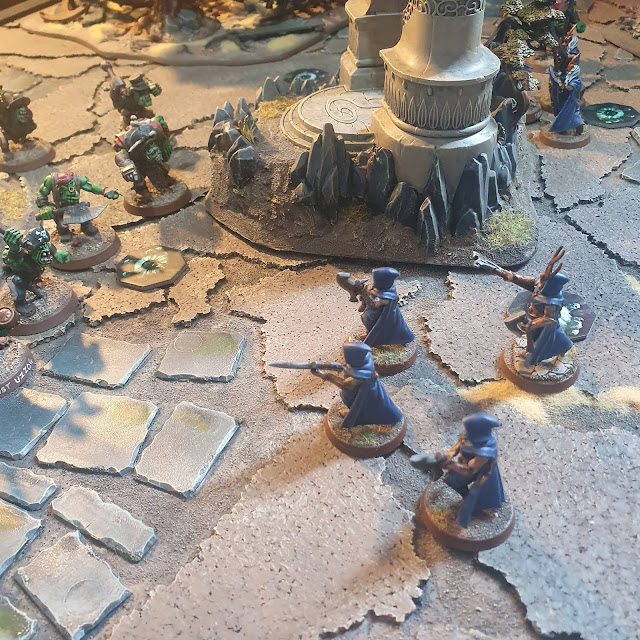 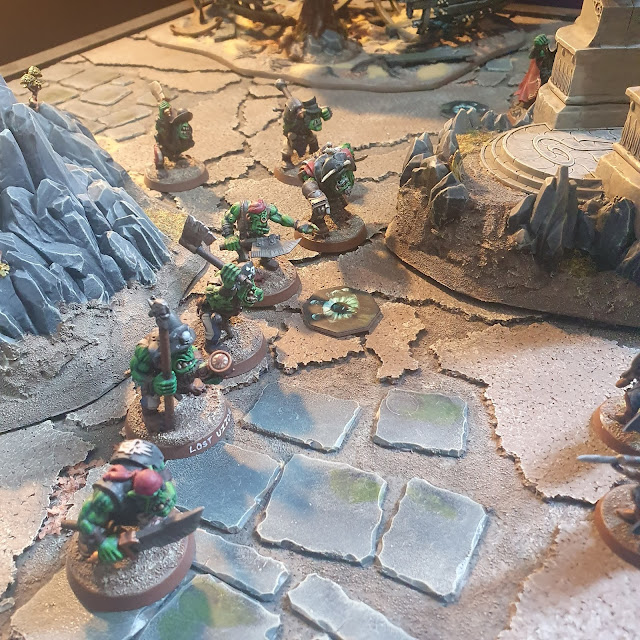 The Baron told the Cleavermaws nearest to him to grab some of the cargo. He wanted to to show them how his magic gauntlet (that he called Sigmar's Bane) would work. 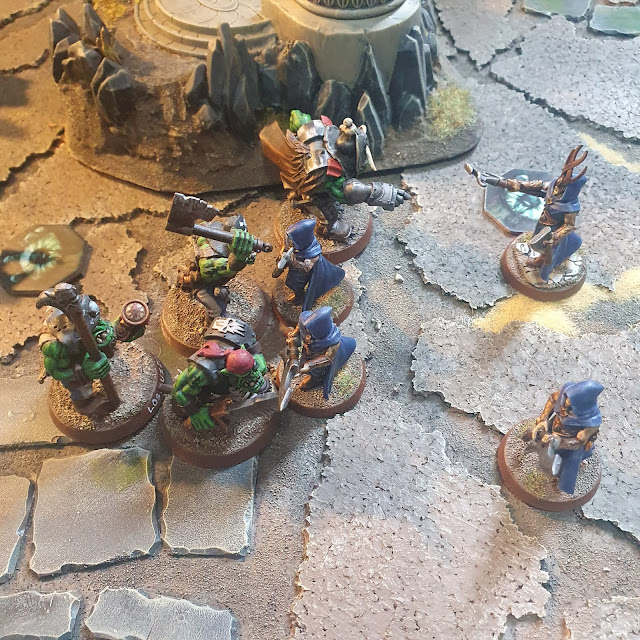 The Rangers fell upon the orruk pirates with shocking speed. The Baron asked the Warden if he wanted to "dance". 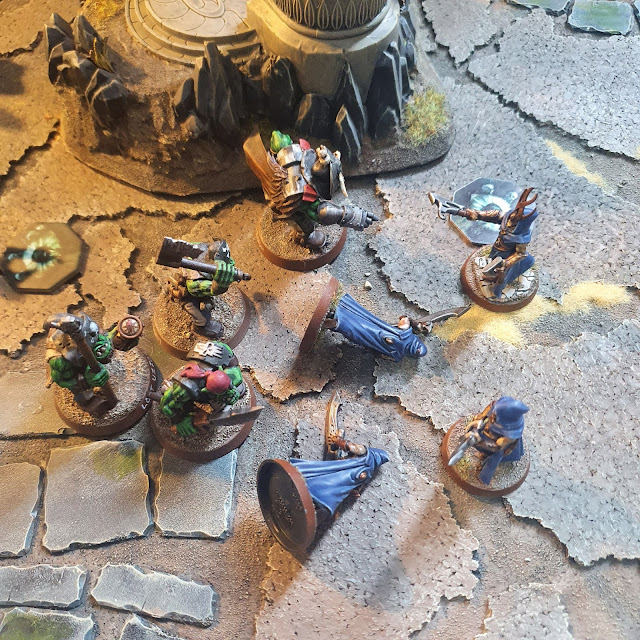 The orruks got lucky with Lost Uzzog's Waaagh! magic fizzing about them. 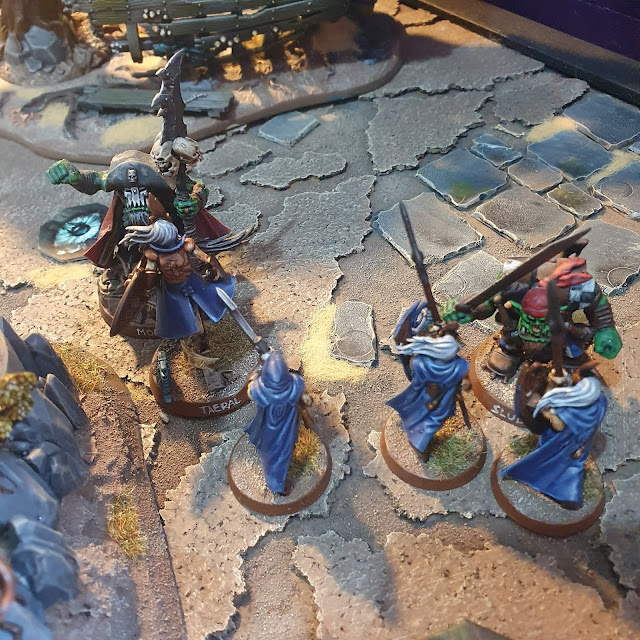 Taeral leapt into the air and seemed to blur he moved so fast toward Mogrum. 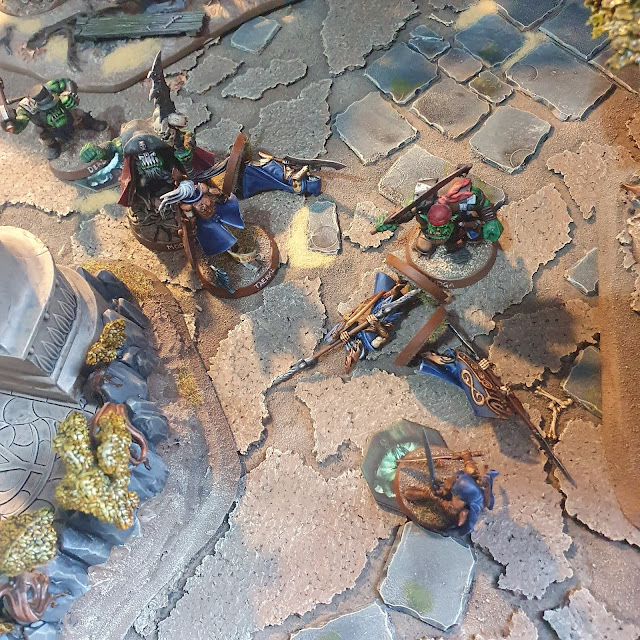 One of the Rangers charged in to support his Prince, but Mogrum ran him through. Mr Sludga laughed as he set about himself with his great kutlass - Drake's Toof.
~ ⦽ ~
The Iscarneth fell back toward their ship leaving the Cleavermaws holding three out of the four lots of cargo. The pirates didn't hang around incase the aelves summoned reinforcements.
Mogrum wondered to himself if the cargo had been left as an aelf trick, a distraction to save their ship... 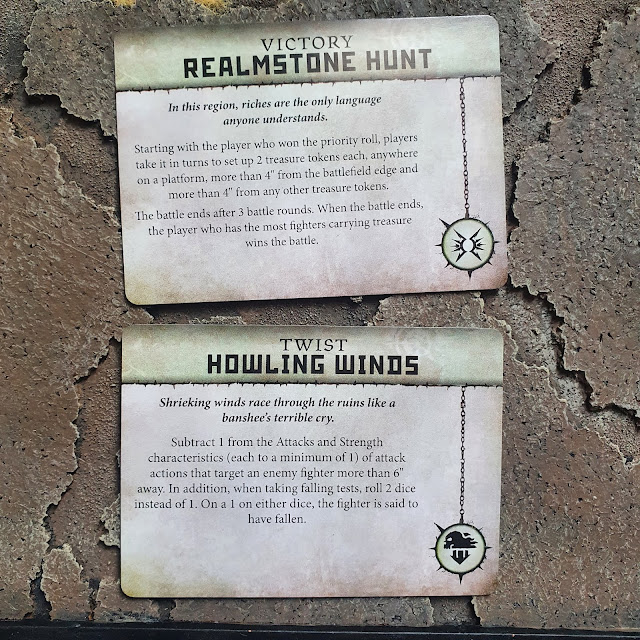