"Little one. Let me tell you the tale of Yrule in the lair of the Ur-Ghuls. I know not why he went in search of them, but Yrule went hunting the hunters in the underbelly of Low Commorragh.

Oh no, my little feral darling, my celadon sweetling, no no. This part of the tail does not concern the Bleaksouls directly. These events unfolded while Morghdrax and his friends were being picked apart by the Shards' dark lancer. But keep in your mind's eye the memory of those bodies in the shadows at the bottom of the stairs.

This part of the tail is just about a fool-hardy Ynnari lord and his search for who-knows-what in the abandoned places, that should left abandoned." 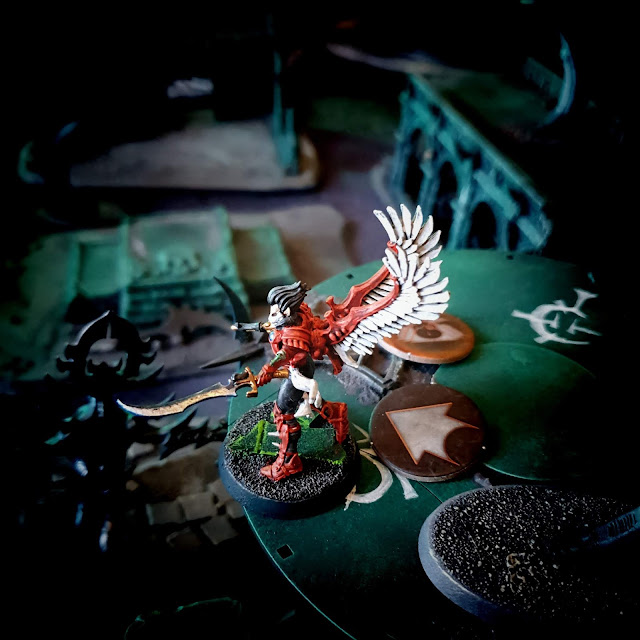 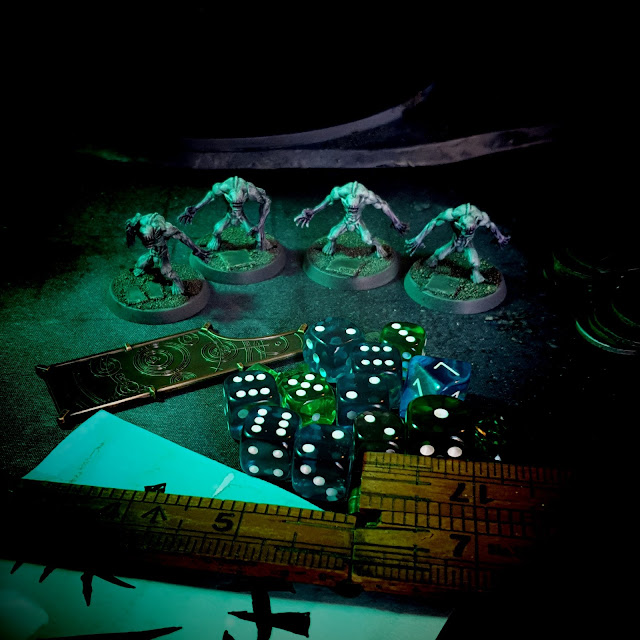 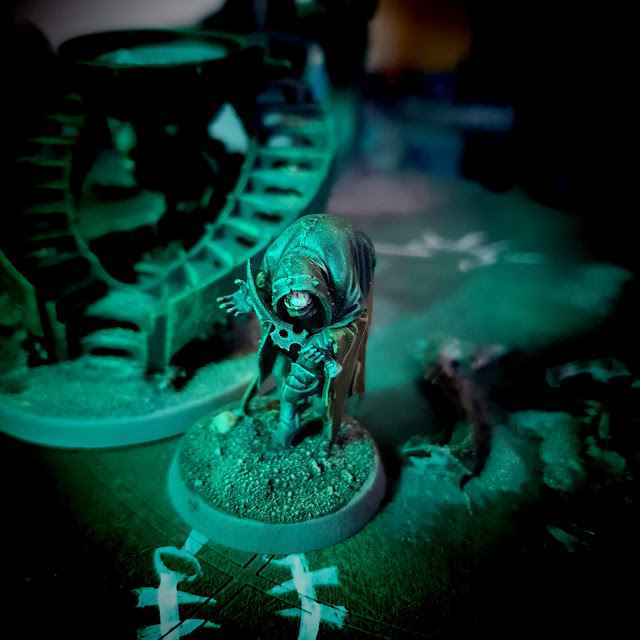 I watched the pack of Ur-Ghuls from the shadows, sniffing the air at the southern edge of the Temple of Khaine. They went skittering and hooting through the darkness, calling to one another as they gathered around the Ynnari they mistakenly thought they hunted. They snuffed and huffed and tasted the air and crept through the archways and over broken stones. 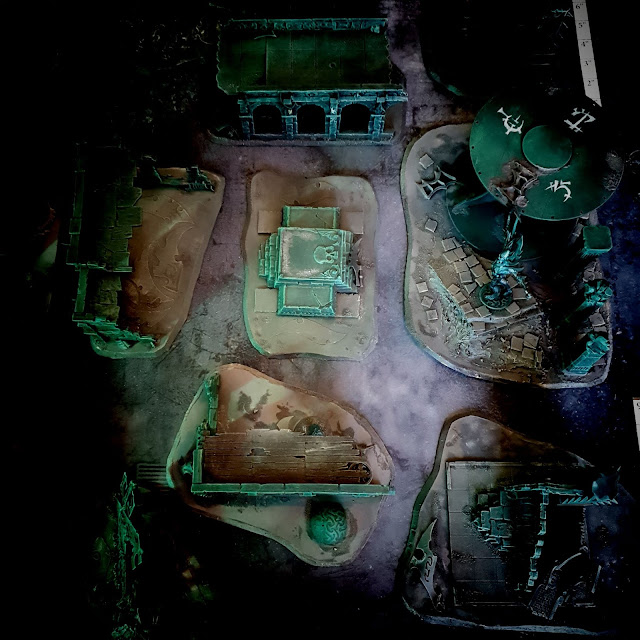 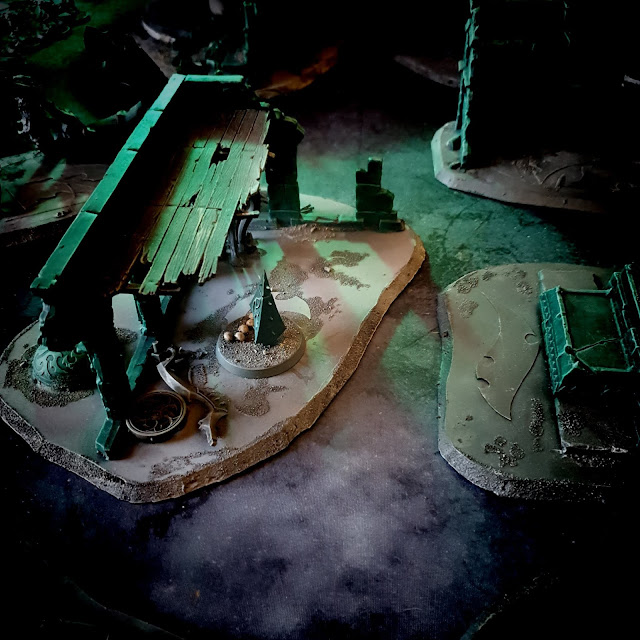 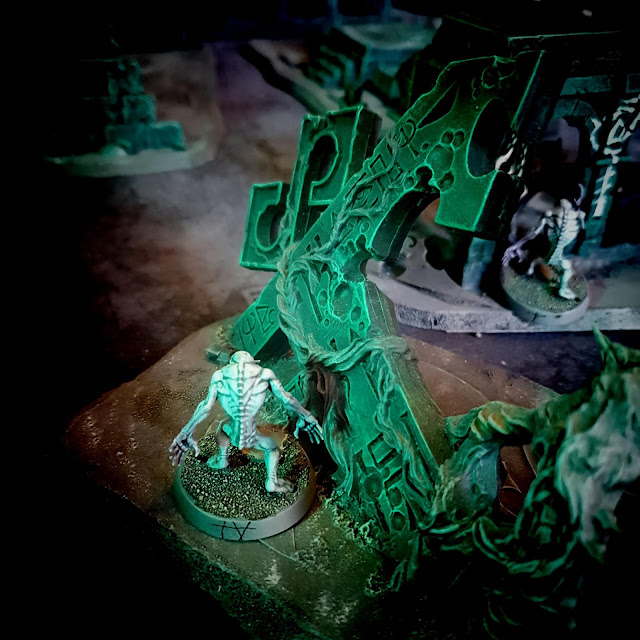 The pack leader, kept his kin close and they moved effortlessly through the familiar ground of their lair. 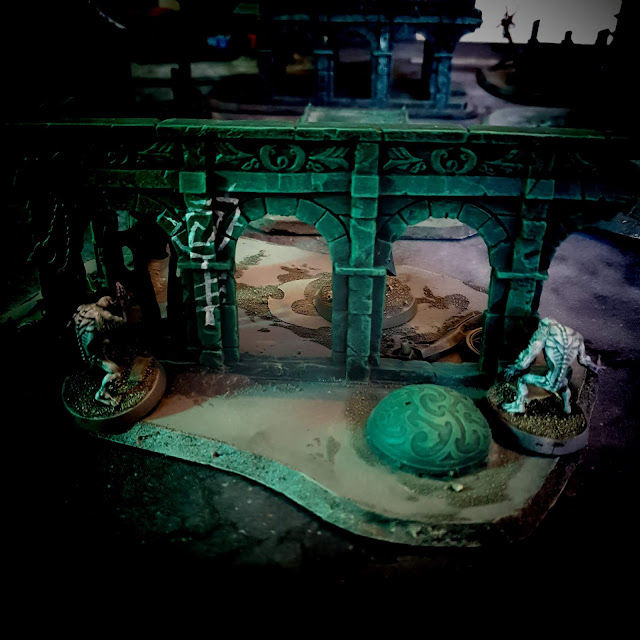 The creatures rocked their heads from left to right as they moved, tracking the Ynnari's strange and foreign scent. 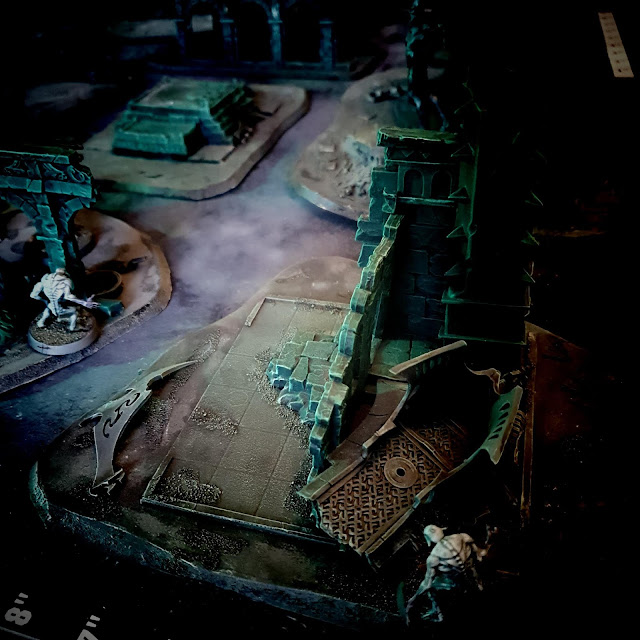 They hissed and capered in the gloom. 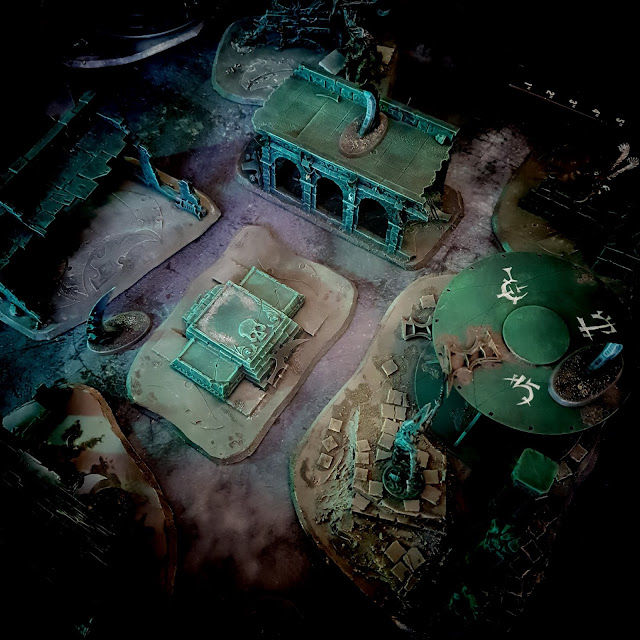 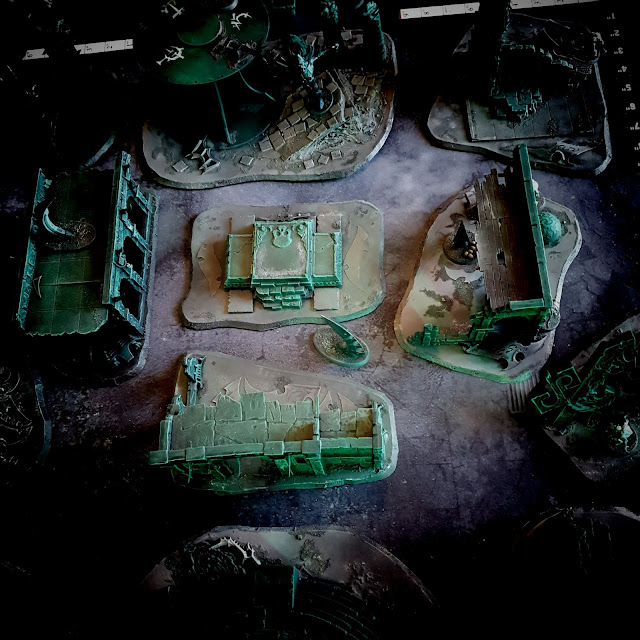 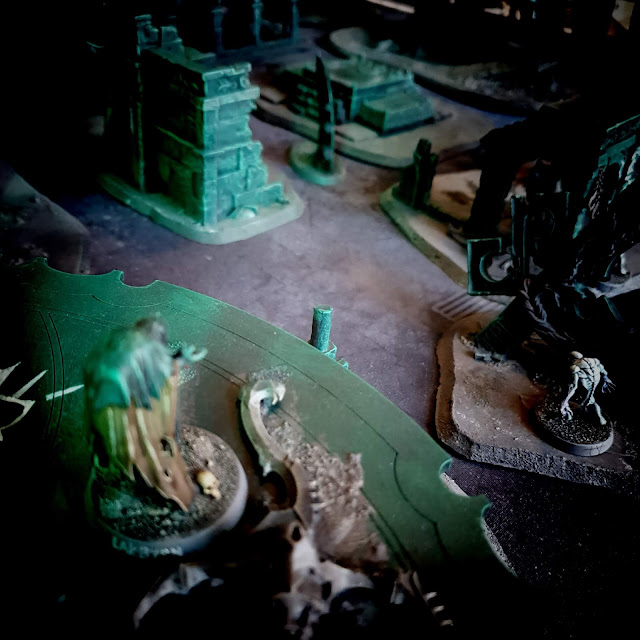 Through arcane skill the Ur-Ghuls could not sense my presence. But I would not tarry long, regardless.

On metal-feathered wings he flitted and glided, soared and wheeled. Danced across the towers and spires, the ruins and wreckage did he. Then he dropped to the Voidfall Tower and looked down on the ruins of the Temple of Khaine.

In the dim viridian light and myrtle shadows things moved. 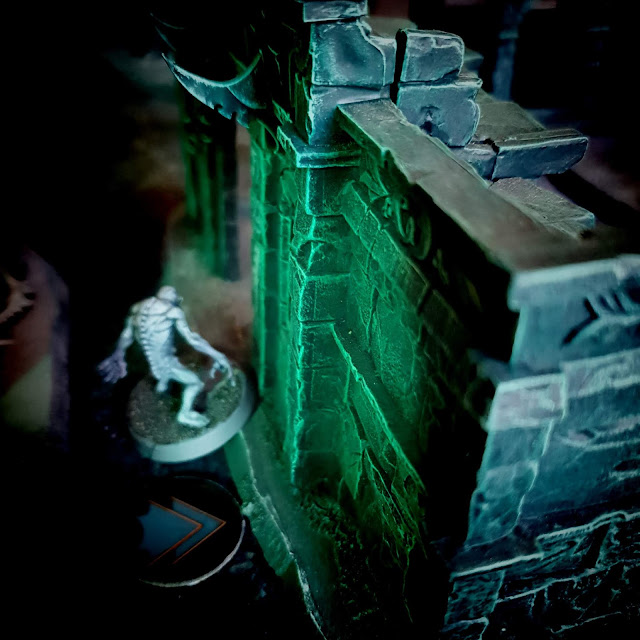 One Ur-Ghul scouted around the main doors to the temple. 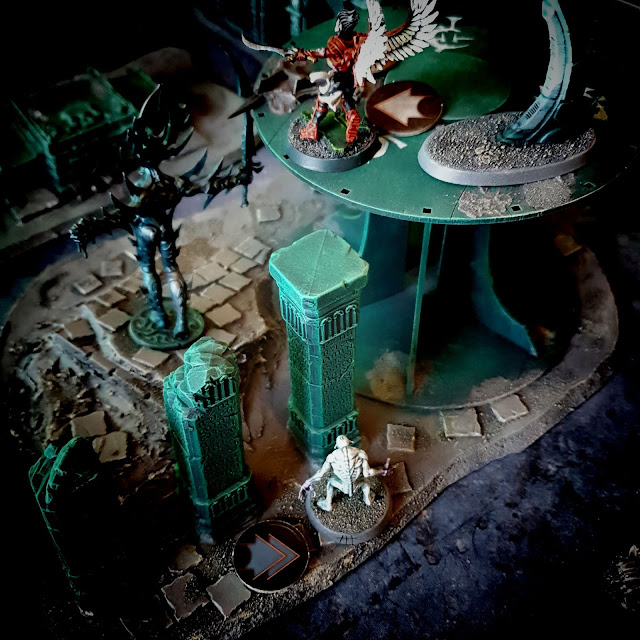 Another Ur-Ghul hissed at the Thanarch in frustration as the Ynnari took wing once more. 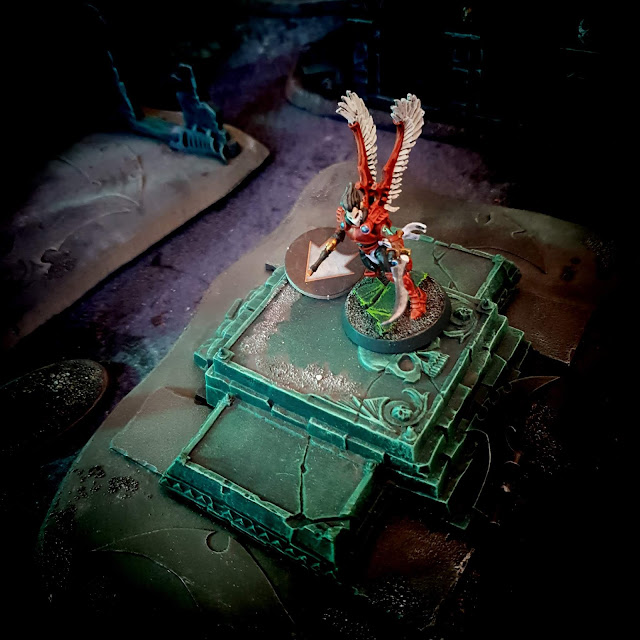 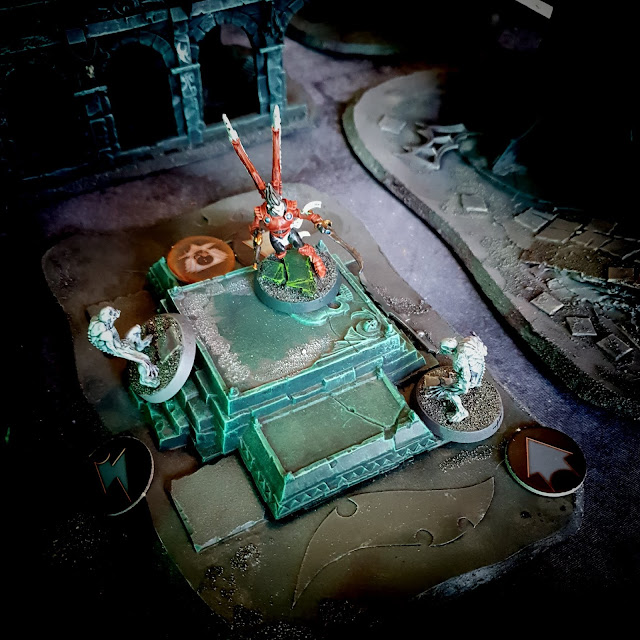 He was immediately pounced on by two of the hungry troglodytes. 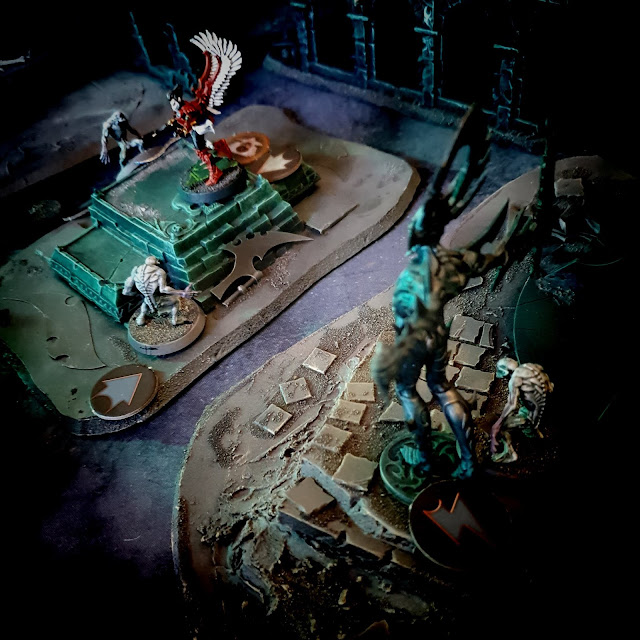 A third scampered quickly across the loose paving slabs. 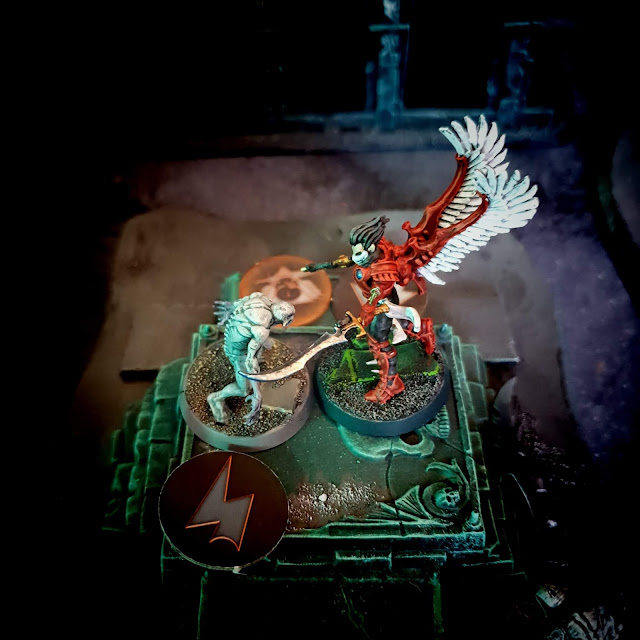 The fastest of the Ur-Ghuls dragged it's fetid claws across Yrule's armour. The Thanarch struck back and the beast howled in pain and recoiled. 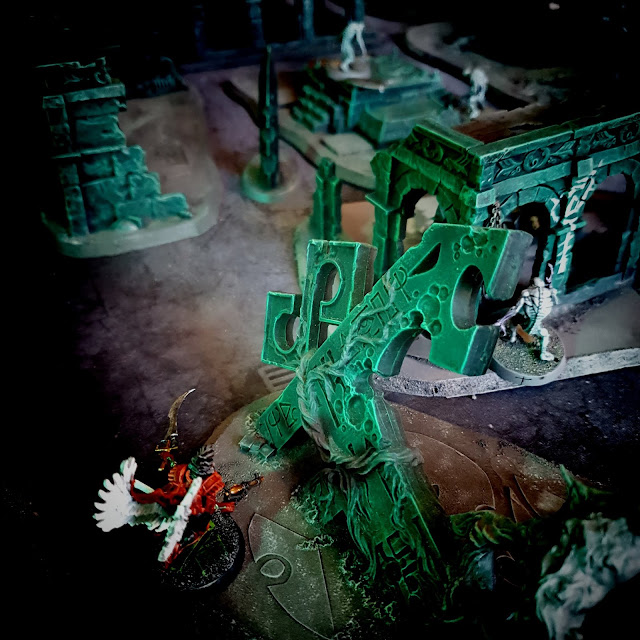 Yrule took wing once more but the dragging claws of the Ur-Ghuls slowed his flight and he was entangled and wounded by the spines of the Barbed Venomgorse as he touched down. The Ur-Ghul pack saw that he was trapped and closed in on him at speed. 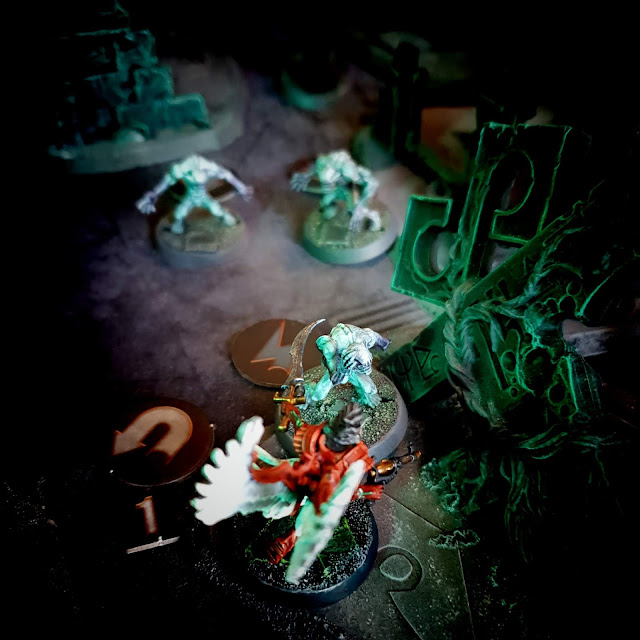 The first to get to him was the pack leader. It was unnervingly fast but the Thanarch was a fraction faster and he inflicted grievous wounds on the beast. But it was not a fatal blow and the creature struck back. 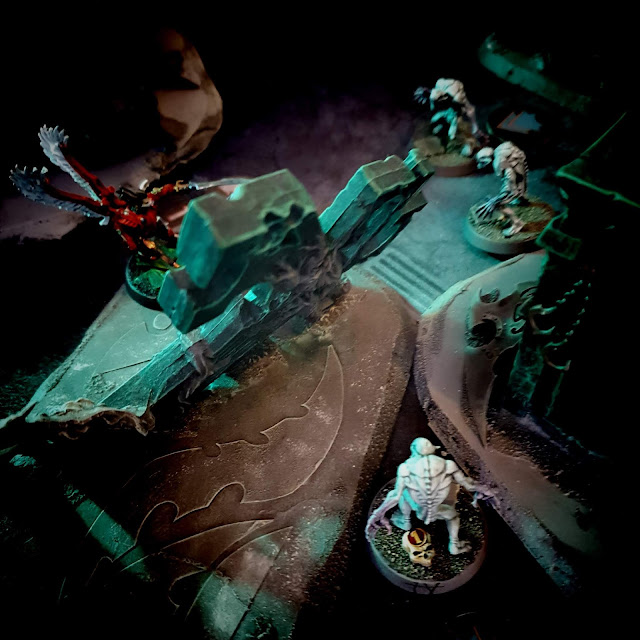 The other Ur-Ghuls bounded into the fight. 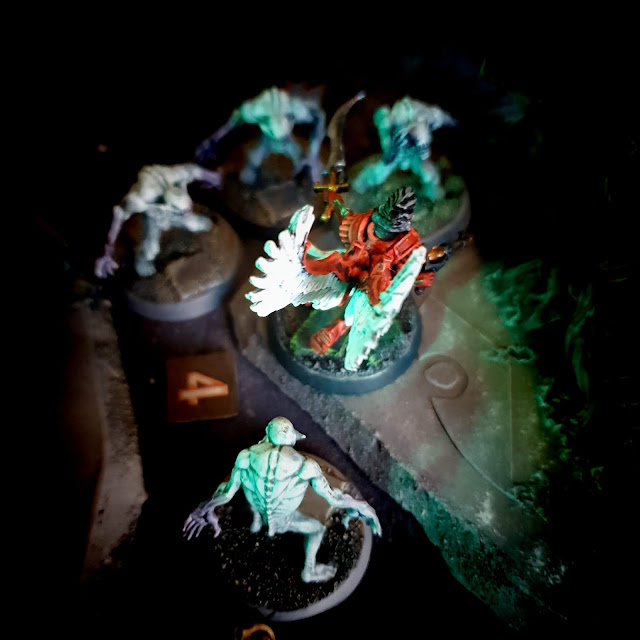 They raked and clawed and slashed at Yrule and they rent his armour asunder. Blood flowed and the Ur-Ghuls hooted and howled in glee. 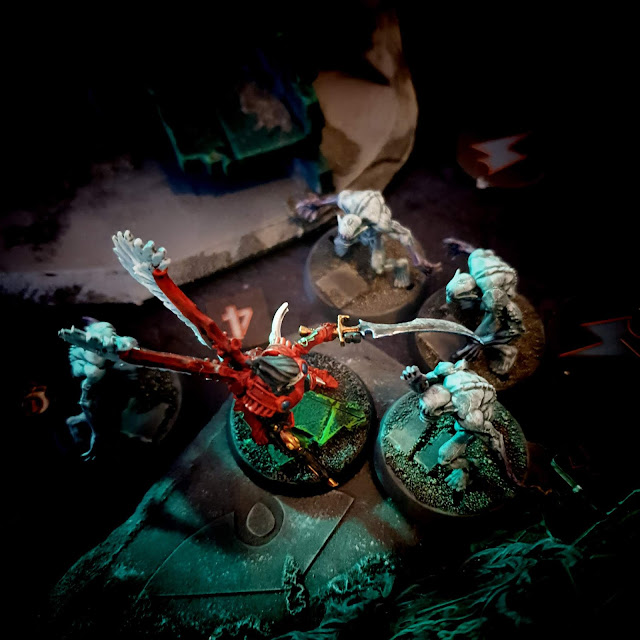 Yrule was no coward.  It is not so, nor was it ever so. But it was clear now that he had to escape. He leapt upward and spread his battered wings and disappeared from my sight into the gathering darkness. Be bold, be bold, but not too bold.

His objective unobtainable, the risk in attempting to achieve it now far outweighed the benefits. He sailed up and up and was gone.

This mission was Army of One, from Commanders.

Viktor had a hidden agenda - I knew the three ways in which he could win the game, but I didn't know which of those three he had secretly rolled.


So I was kept guessing until a turn or two before then end of the game! He rolled a dice in secret and covered it with the vortex marker from our last game, keeping it on the edge of the board until he was ready to reveal it. This was a great source of tension for me, and the only way a single model can prevail against steep odds for Viktor.

Viktor's version of this tail is here.
Posted by WarbossKurgan (Saul) at 14:27