Beast's Lair Battleplan from Path to Glory, with house rules:

El Doctoro the shaman woke with a start. He wasn't sure what had woken him but he fumbled in the darkness to get out of his hammock and light a candle. He put on his red-glass lenses and looked around the attic room of the inn where the Rotmoons were billeted. There was nothing out of the ordinary, but something had made a noise. Maybe it was just in his dream? The splitcap mushrooms he ate last night, recommended by Bolet Ghosteater for their power, were probably to blame.

Then he heard it again.

It was like the harsh caw-ing of a crow, but much louder and distinctly unnatural. El Doctoro opened the shutter on the small window and peered out into the dim predawn light. Beyond the edge of the village was the virtually-impenetrable forest: Seemingly endless leagues of dark, tangled, twisted and unnatural woods. Dead trees were warped by death-magic, skull-formed rock formations towered over the forest canopy like grim islands in an arboresque sea.

A huge dark shape suddenly swept past; the lingering impression of black-feathers, skulls, branches, bones, and rocks: A Death-monster, born from the forest itself. A crow-winged nightmare. 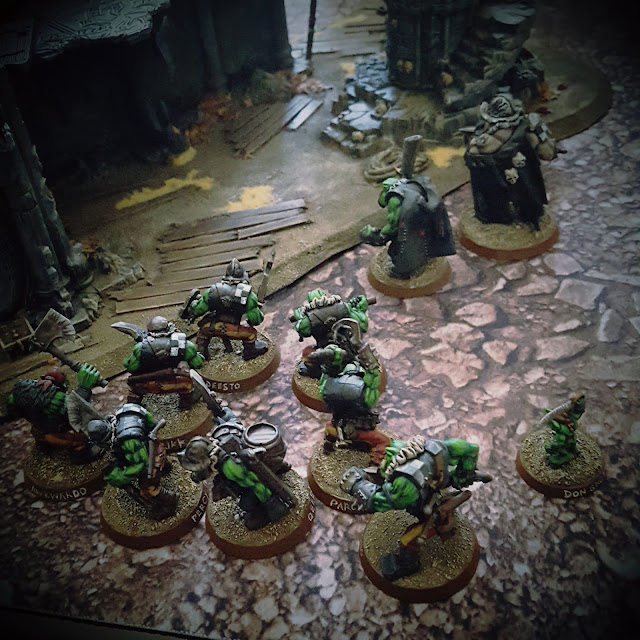 The Rotmoons hurried through the ruins in the forest. 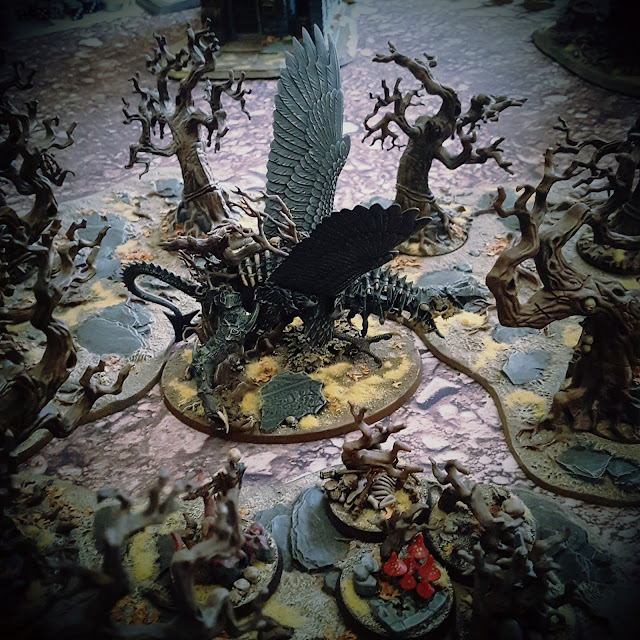 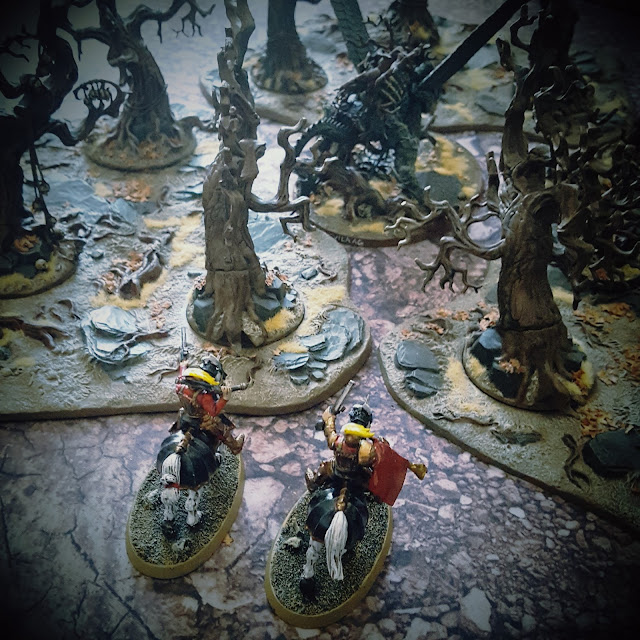 The Pistoleers of the Gilded Hand bravely galloped forward toward the forest lair of the Olshovilaag. 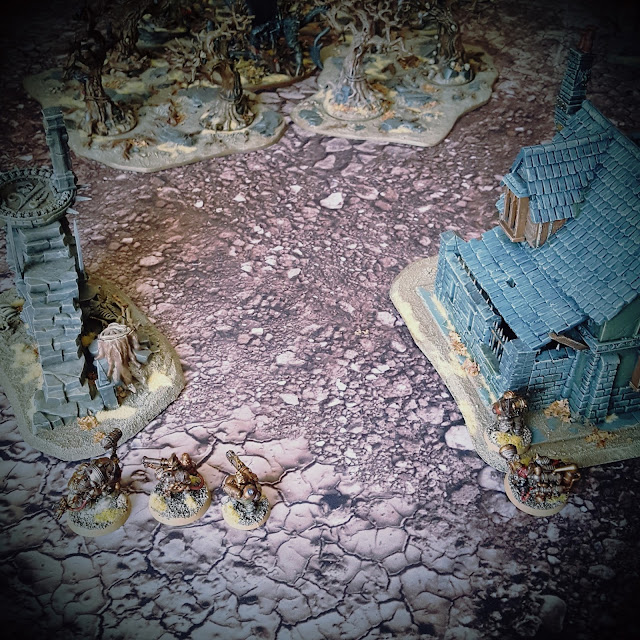 The Raidho Othalas kept their distance, using the houses at the edge of the woods for cover. 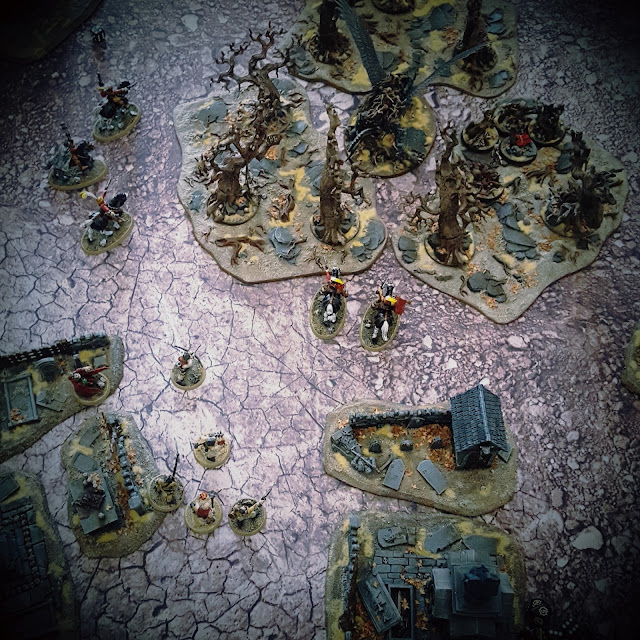 Some of the Pistoleers tried to outflank the Olshovilaag. 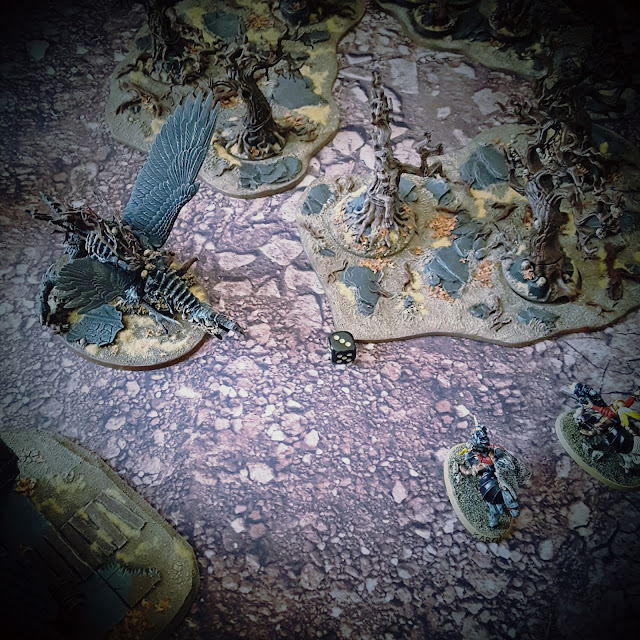 The revolting creature flapped its ragged black wings and flew out of the trees, it screeched at the nearest Pistoleer and its terrible voice scythed through the unfortunate trooper's soul! 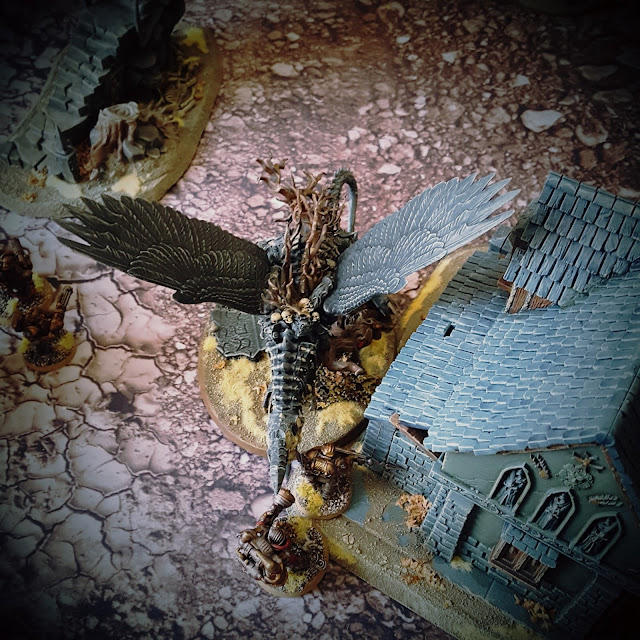 The Fiend then turned on the Kharadron heroes, snapping it's beaked maw at the and clawing them. The fetid stink of its grave-breath was almost overwhelming! 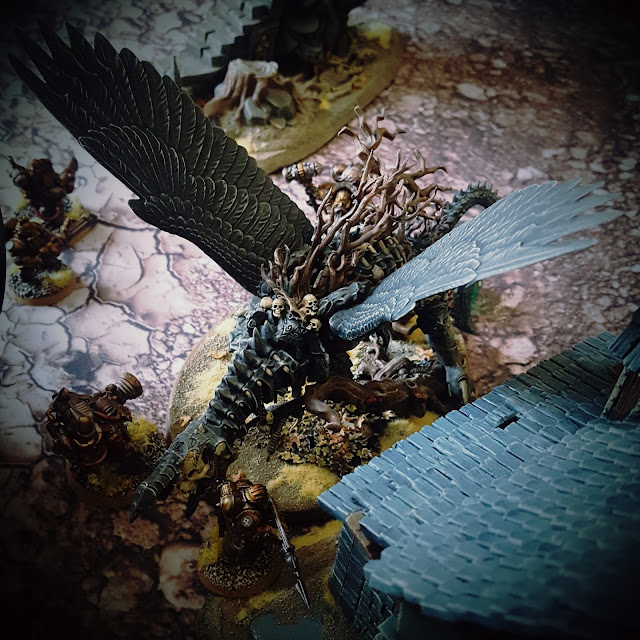 Amazingly the duardin survived, held their ground, and were able to strike back! 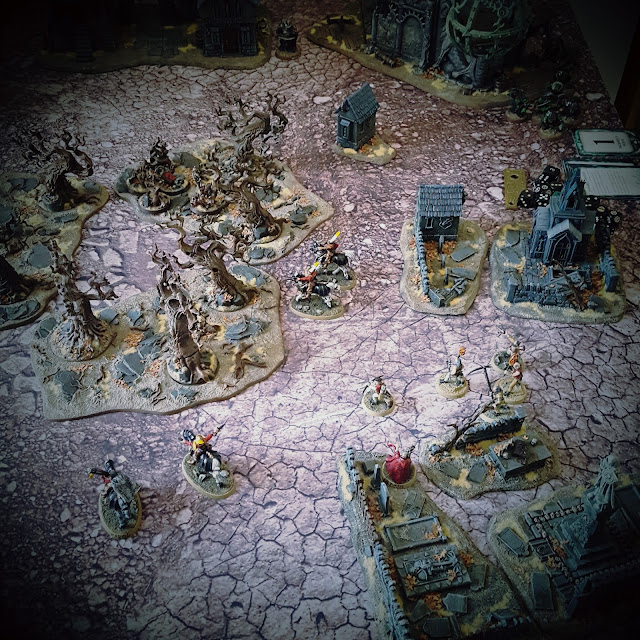 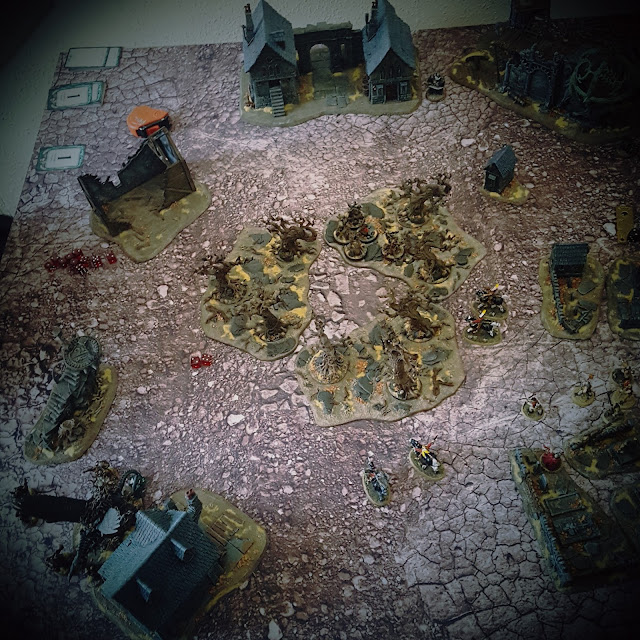 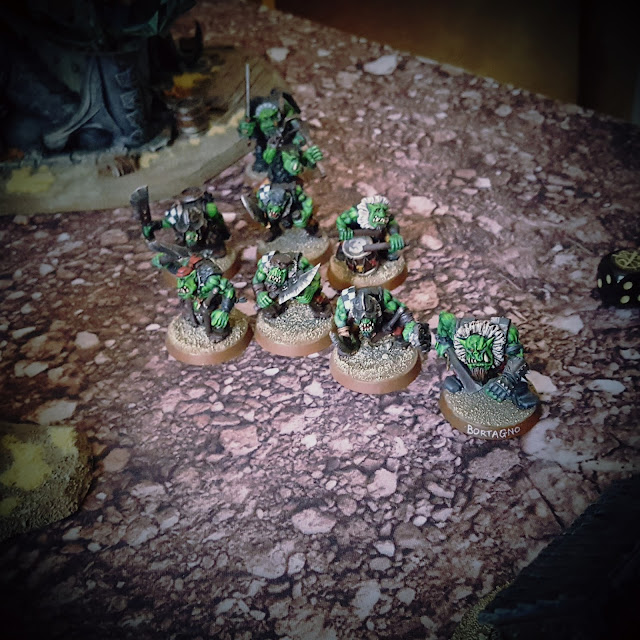 The Rotmoons rushed toward the lair of the creature, hoping to loot any treasures it had collected. 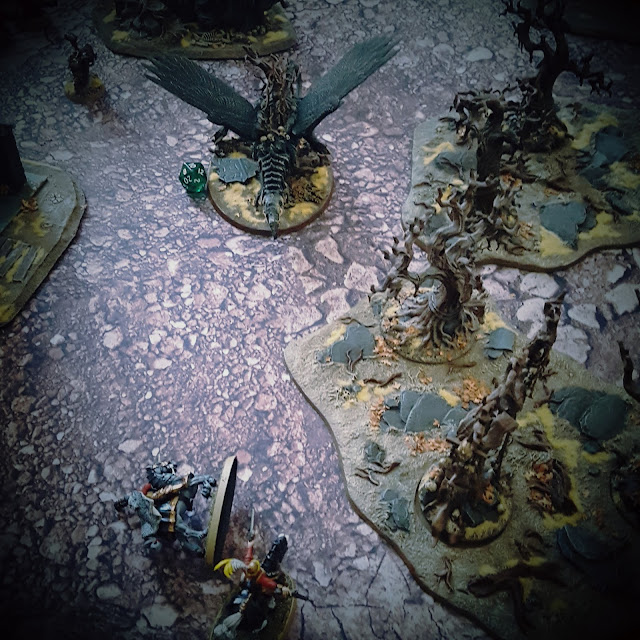 Olshovilaag disengaged from the Raidho Othalas, after they poured a huge volley of fire into it's rotting carcass, and turned its attention on the Pistoleers again, shredding another trooper's soul. 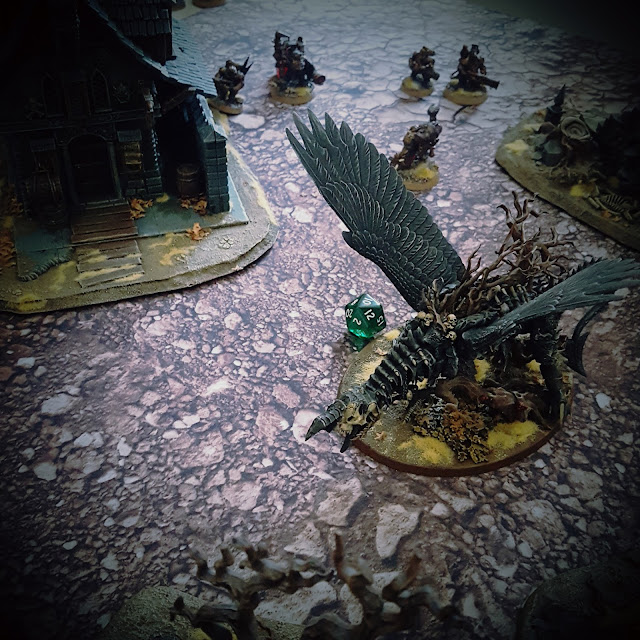 The Kharadron blasted it with a second concentrated volley... 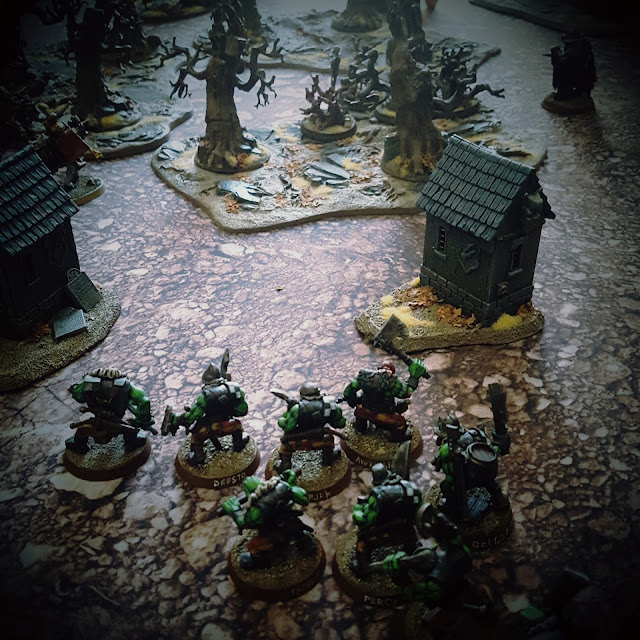 The Rotmoons could only watch as the beast seemed to come apart at the seems. A huge flock of ragged black crows burst out of the beast, as if its essence was transmogrified at the moment of it demise. The Wortbad villagers knew that this had happened every time someone tried to kill it, but none of the warbands had listened to the peasants! 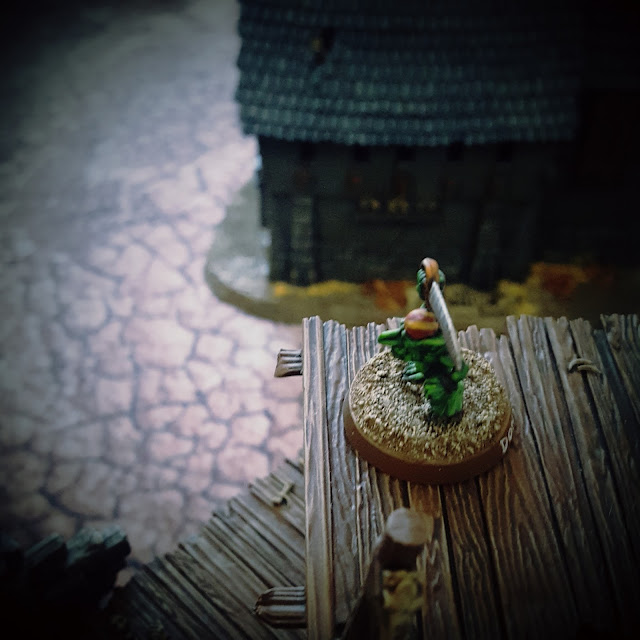 Don Snotto squeaked a warning that both the opposing warbands were now turning their attention on the Privateers; it was time to leave! 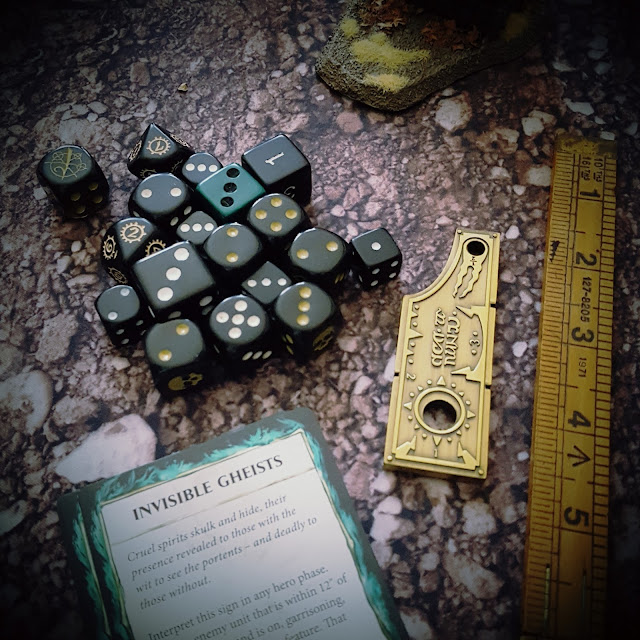 Godfather Viktor's version of this adventure is here.
Posted by WarbossKurgan (Saul) at 14:23