Lands of the Dead

Fleshless vultures circled high above the Harrowmark and skeletal jackals prowled the forests. Bolts and arrows drove them off soon enough, but they were always there, just out of reach.

Worse still were the dreams of the omen some called the Writhing Serpent, the skeletal, snake-like form that haunted the nights of Shyish. Some said it is a familiar spirit of Nagash himself, an omen of his dark will made manifest; others that it was the spirit of Nagendra, Father of Serpents, slain by Sigmar in the Age of Myth. Whatever its cause, it could not bode well, and it slithered through the dreams of Bolet Ghosteater.

The gates into the infamous Great Oubliette were open, where Nagash kept those who wronged him for all eternity.


Whispered words, as heavy as tombstones slammed into Bolet's mind.

WE ACCEPT YOUR OFFER.

Sweat poured from the Cave-Shaman's brow as he cowered in front of the Knight of Shrouds. The aura of death around the terrible spectral form of the hunchback ghast was oppressive. With shaking hands he handed over the Rotmoons cache of Realmstone Sand, in a deal that Kapitán da Leeva would not have agreed to, even if he had known of it.

GO TO THE HURRICANE BELL AT BLACKROCKS. WAIT FOR US THERE.

Bolet scrambled to his feet and ran. The less time he spent in the company of Nighthaunts the better,a s far as he was concerned. But the Portents were clear, the servants of Nagash were not going to let anyone else win a war in the Realm of Death. A temporary alliance was the only sure way to survive in the short-term. Beyond that he had no plan. The Cave-Shaman had woken from fevered hallucinogen-fueled dreams and gasped for air far too many times for comfort. The visions of a squirming boney snake coiled around him and crushing the breath from his body still loomed large in his mind. 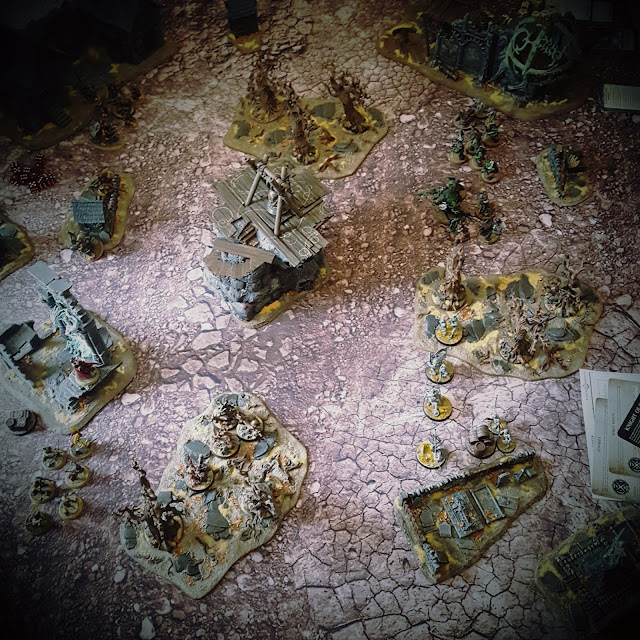 Race to Destruction (Coalition of Death battleplan): if the signs have been interpreted correctly, a vast deposit of Realmstone lies beneath the ground around the Hurricane Bell. It is better to share it with one ally, than having to fight many enemies. 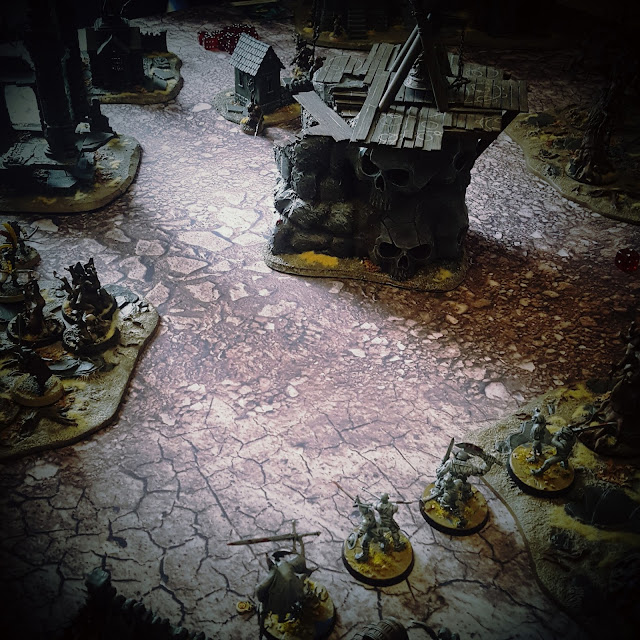 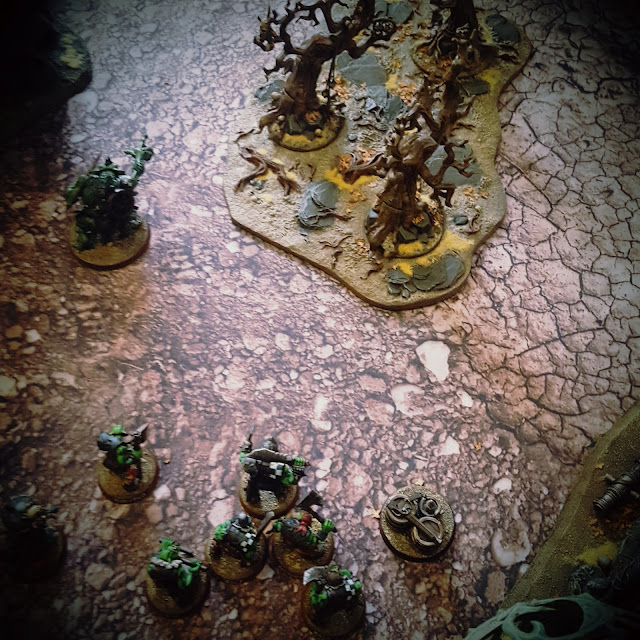 Bolet looked sideways at his new allies. He was deeply distrustful of them but could not let the orruks know that. If they'd thought he had any doubts they would have abandoned him immediately. 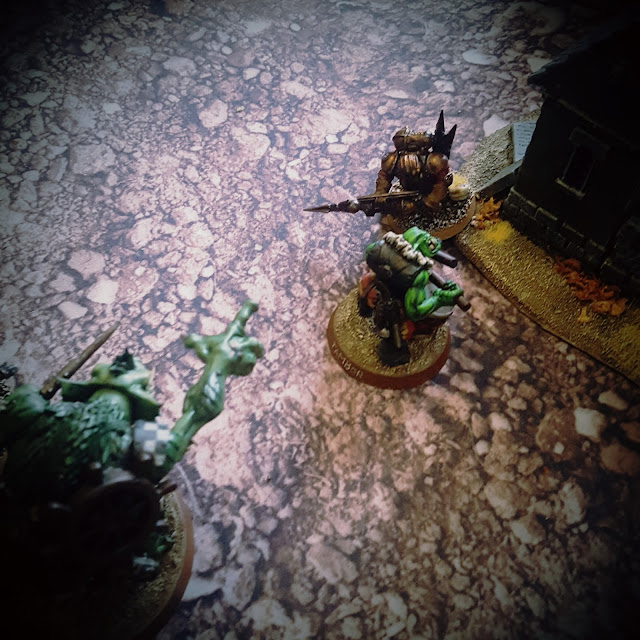 Tambor headed for the Fisherman, hoping to win some glory by bringing down the now-infamous Duardin. 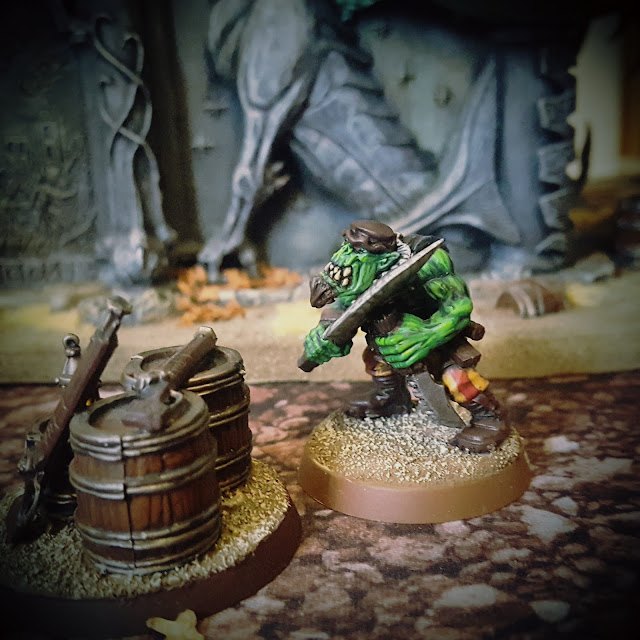 Bold Rikk was given the task of looking after the stash of loot. He wasn't pleased until he realised there was a barrel of rum amongst the cache of Realmstone... 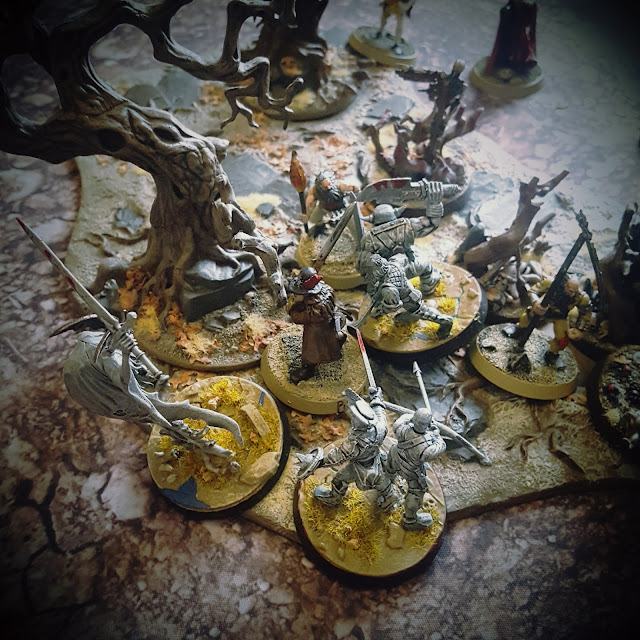 An'sec, the Knight of Shrouds, made directly for the Witch Hunter, the Spirit Hosts accompanying him surrounded the servant of Sigmar! 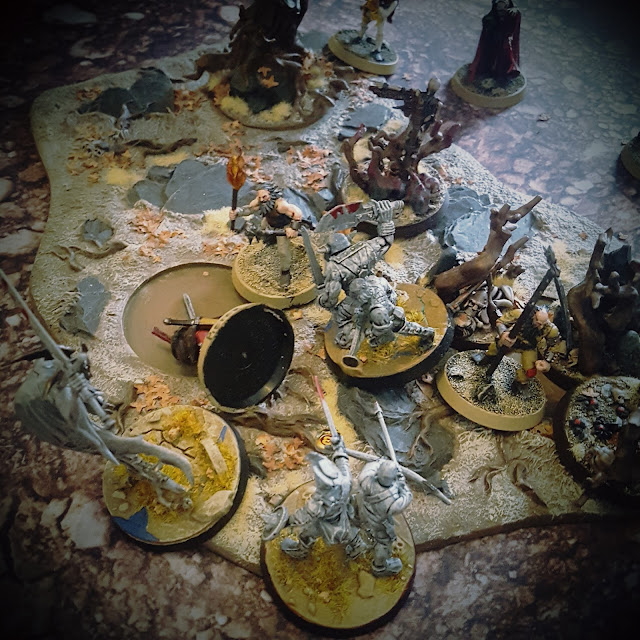 The Balefire Blade bit deep and the Witch Hunter dropped to the forest floor. 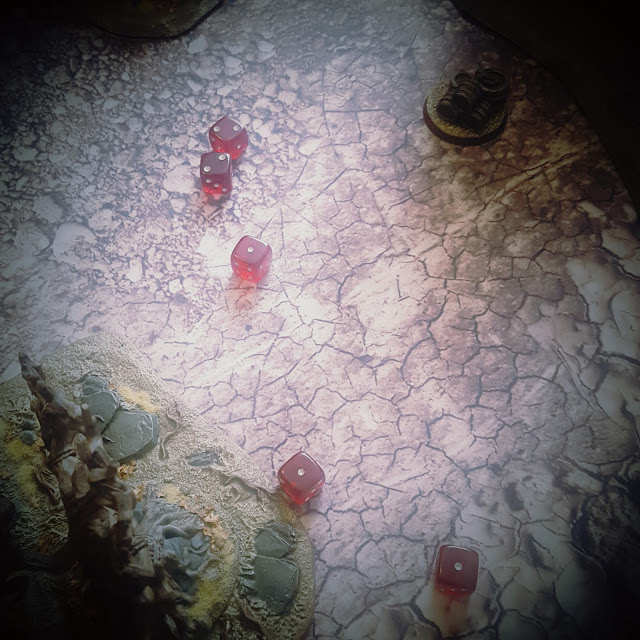 A ragged volley of shots rang out across the battlefield as the Kharadron opened fire, the orruks ducked but the shots missed their marks by a wide margin. 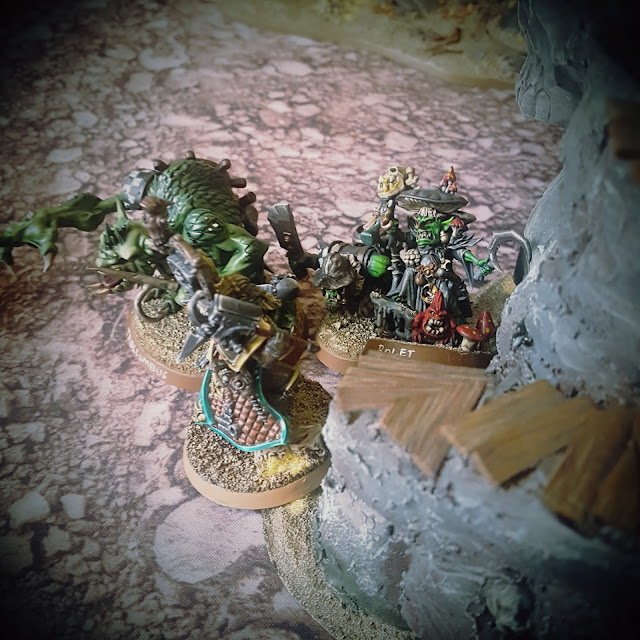 Bolet and his bodyguard hurried to the Hurricane Bell, the Lord Ordinator tried to intercept them. The Cave-Shaman's followers leapt on the Stormcast Harbinger with glee. 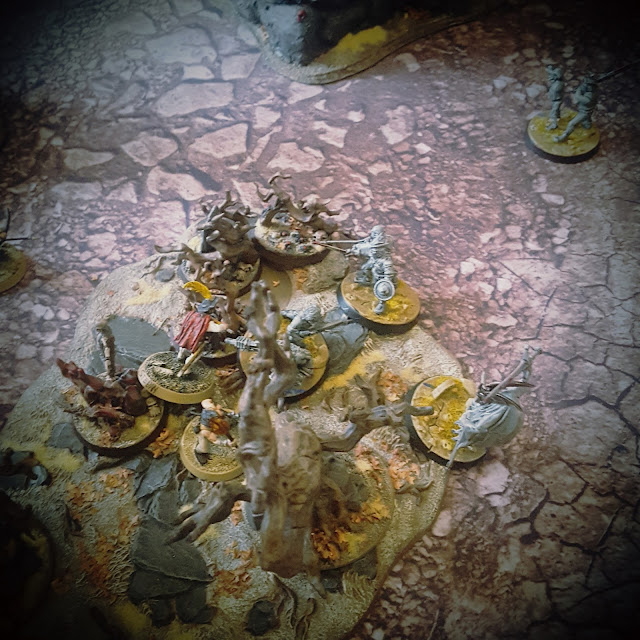 The Spirit Hosts chewed through the remaining Freeguilders in the forest, who bravely stood their ground regardless of the loss of the Witch Hunter. 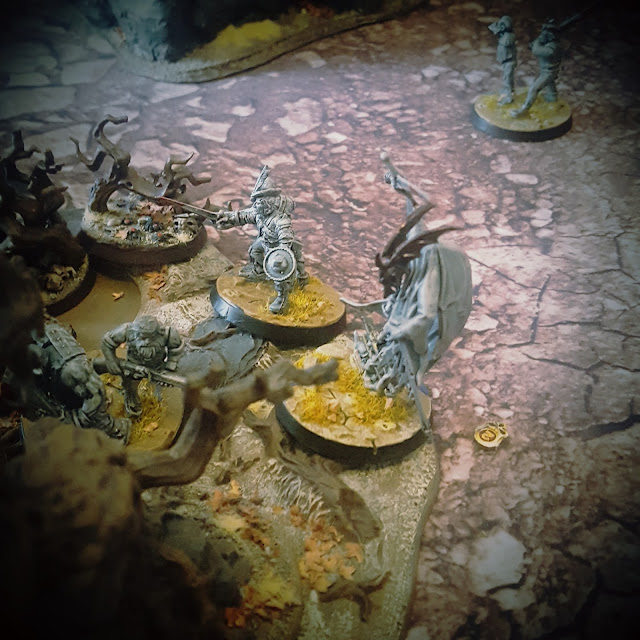 An'sec stayed back and watched the battle progress, after he completed his personal objective of cutting down the Witch Hunter. 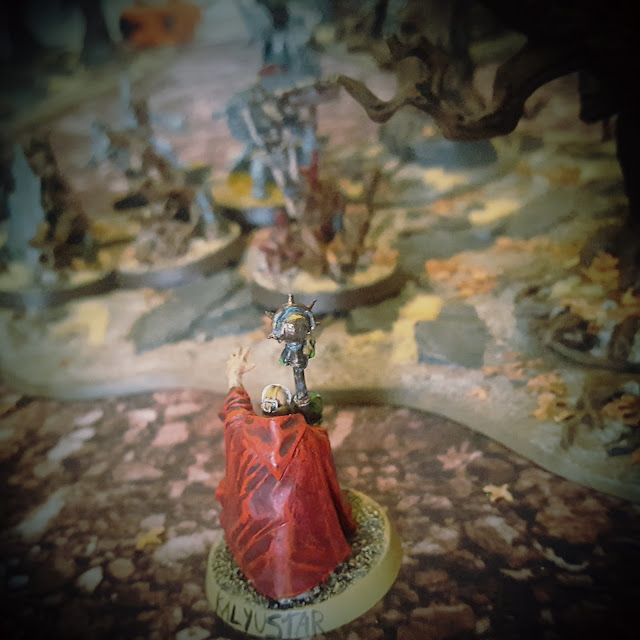 Kalyustar targeted the Knight of Shrouds with the first of many arcane attacks. 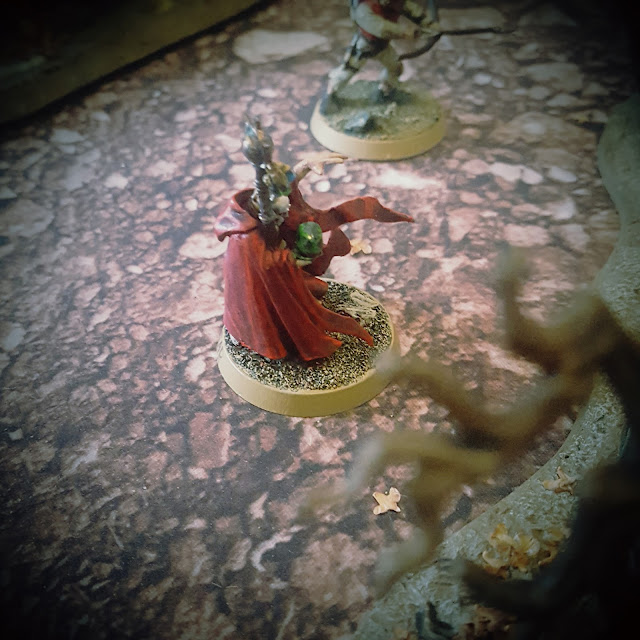 The Knight was very nearly banished but he held a powerful relic: The Ring of Immortality restored his life-force. 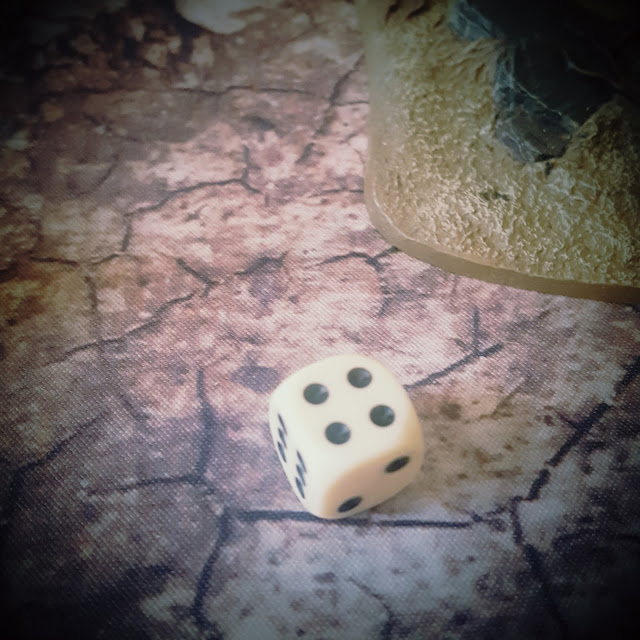 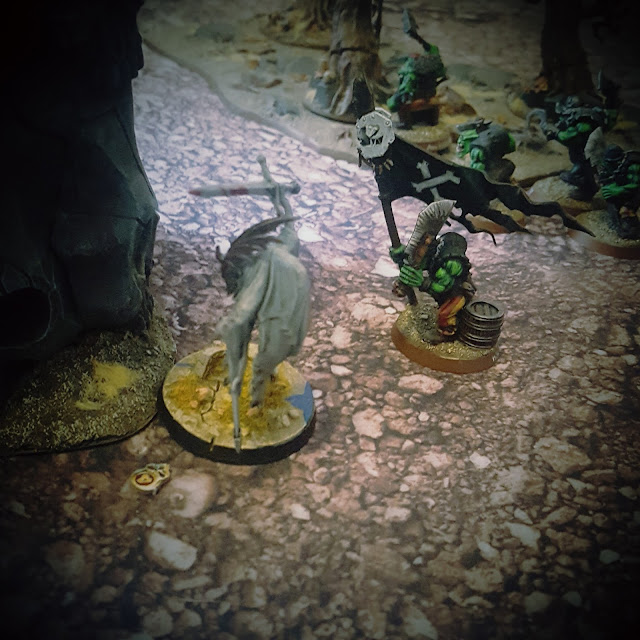 He re-materialised behind the Hurricane Bell, clinging to the last scraps of his existence! 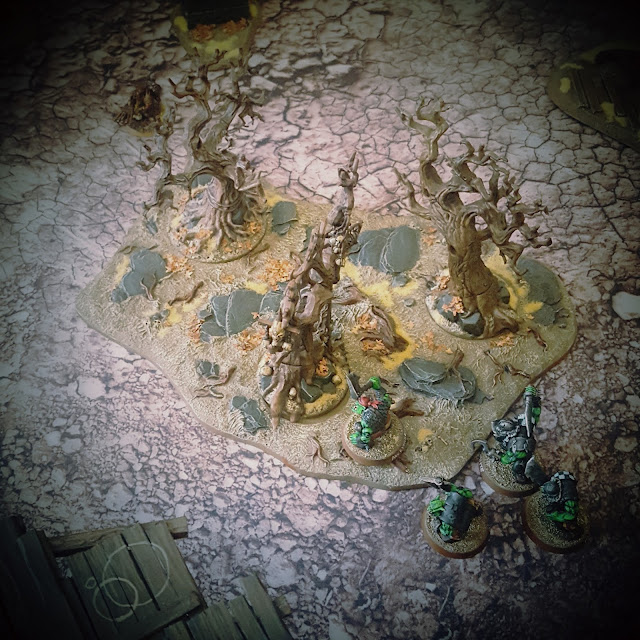 The Rotmoons advanced through the forests but the death of some of their mates spooked them... 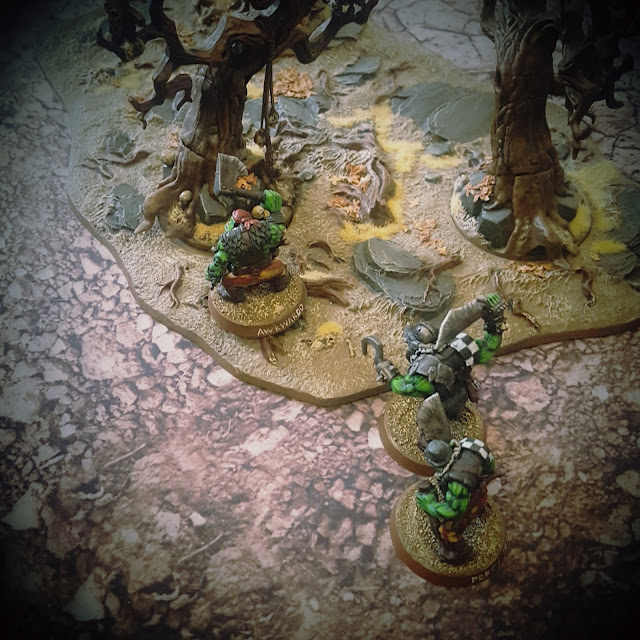 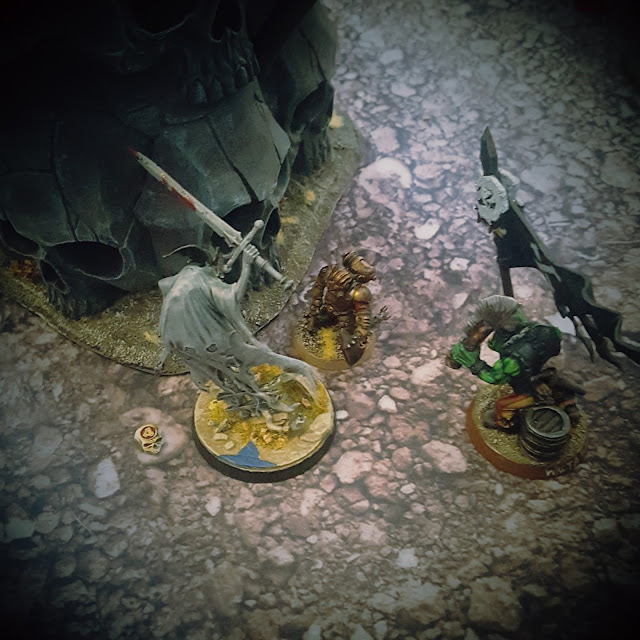 An Arkanaut tried to take advantage of the Knight of Shroud's weakened state, but the Knight just drained the soul-stuff of the Kharadron and used it to replenish his own life-force! 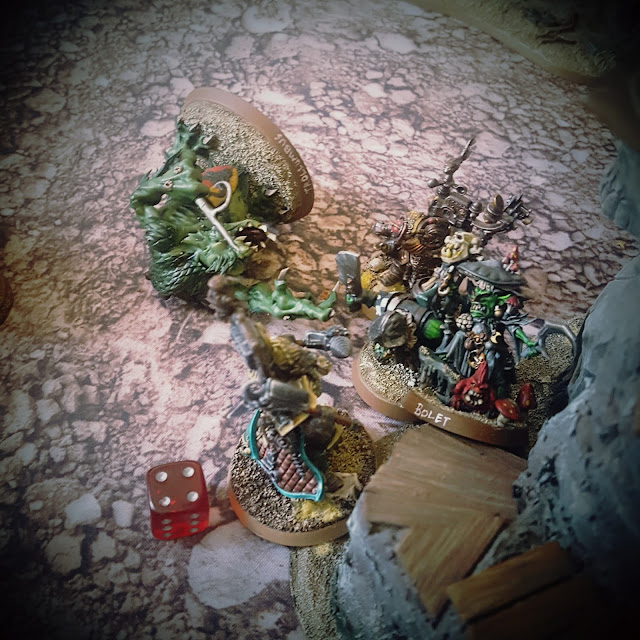 After a barrage of gunfire from the Thunderers and a rain of hammer-strikes from Lord Ordinator Ironfundson, Trollumbus the Fellwater Troggoth finally fell. 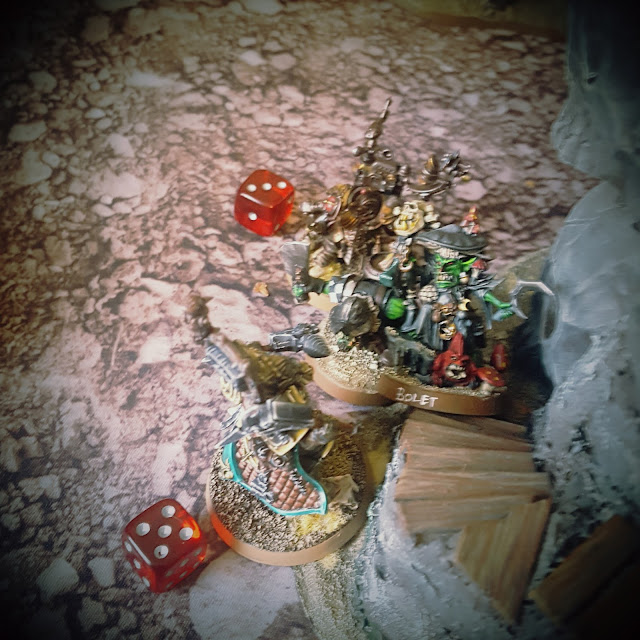 Bolet fumed with rage! He stuffed a handful of Deffcap Mushrooms into his mouth and let the magical fungus infuse him with potent energy! 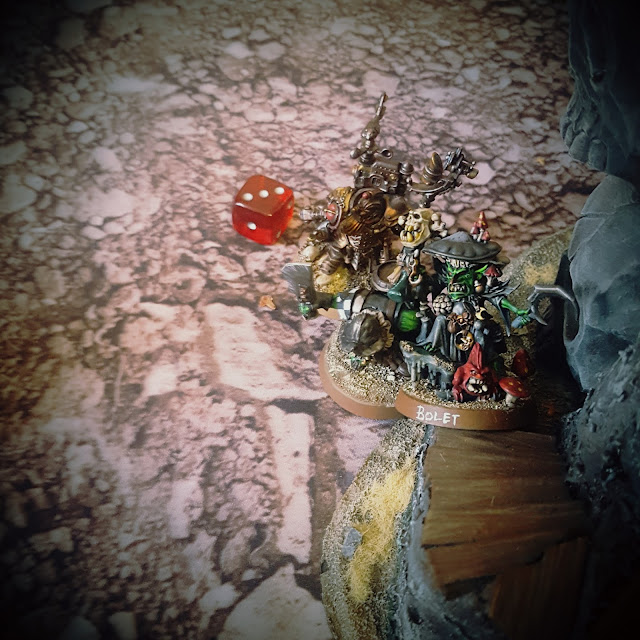 ... And he unleashed the deadly power of the Spore Maws: With a high-pitched screech, the Cave-Shaman caused the thick spores around him to coalesce into gnashing green mouths which swarmed Ironfundson and the Navigator, and brought down the already-injured Lord Ordinator!

The Kharadron and Freeguild withdrew in good order but they had only managed to hold on to a single stockpile of Realmstone. Two were in the hands of their enemy and the last was left in the field. 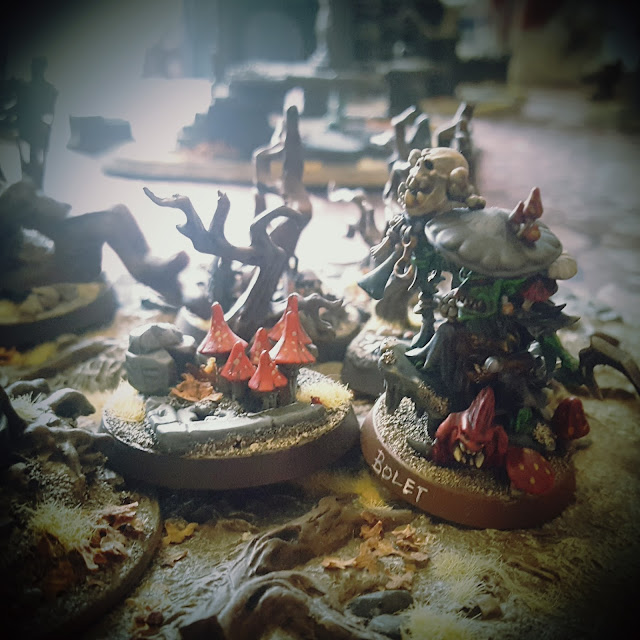 Elated at his first taste of victory, Bolet Ghosteater scuttled off into the woods and started collecting the interesting mushrooms he had spotted there, earlier in the day. He was determined to get absolutely hammered that night. 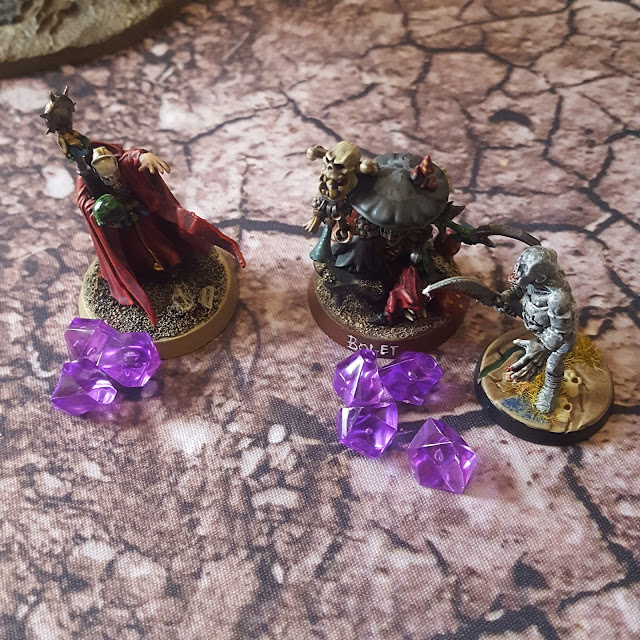 Godfather Viktor's version of this adventure is here.
Posted by WarbossKurgan (Saul) at 10:55