After their recent successes, the Cleavermaws had set up a camp, a base of operations of sorts, in a group of ruined houses with the remains of walls between them. They had gathered quite a stash of loot and most of it was hidden in the basements of the ruins, or buried in the gardens.

The area was also surrounded by the corpses of the previous inhabitants, and more recently a crop of adventures and explorers, Their bodies had become so steeped in wyrdstone dust that they did not rest easy. The slightest movement in the streets would disturb the deadwalkers and they would shamble towards the interlopers to feed on their warm flesh. The pirate orruks took full advantage of this, as well as setting up sharpened stakes and traps in the ruins they made sure that the deadwalkers stayed nearby but none came into their stockade.

The Church of Sigmar’s Retribution picked their moment to try to deal with the orruk pirates, once and for all. They mustered their full strength against the greenskins and waited until a heavy mist lay across the town, to conceal their approach. 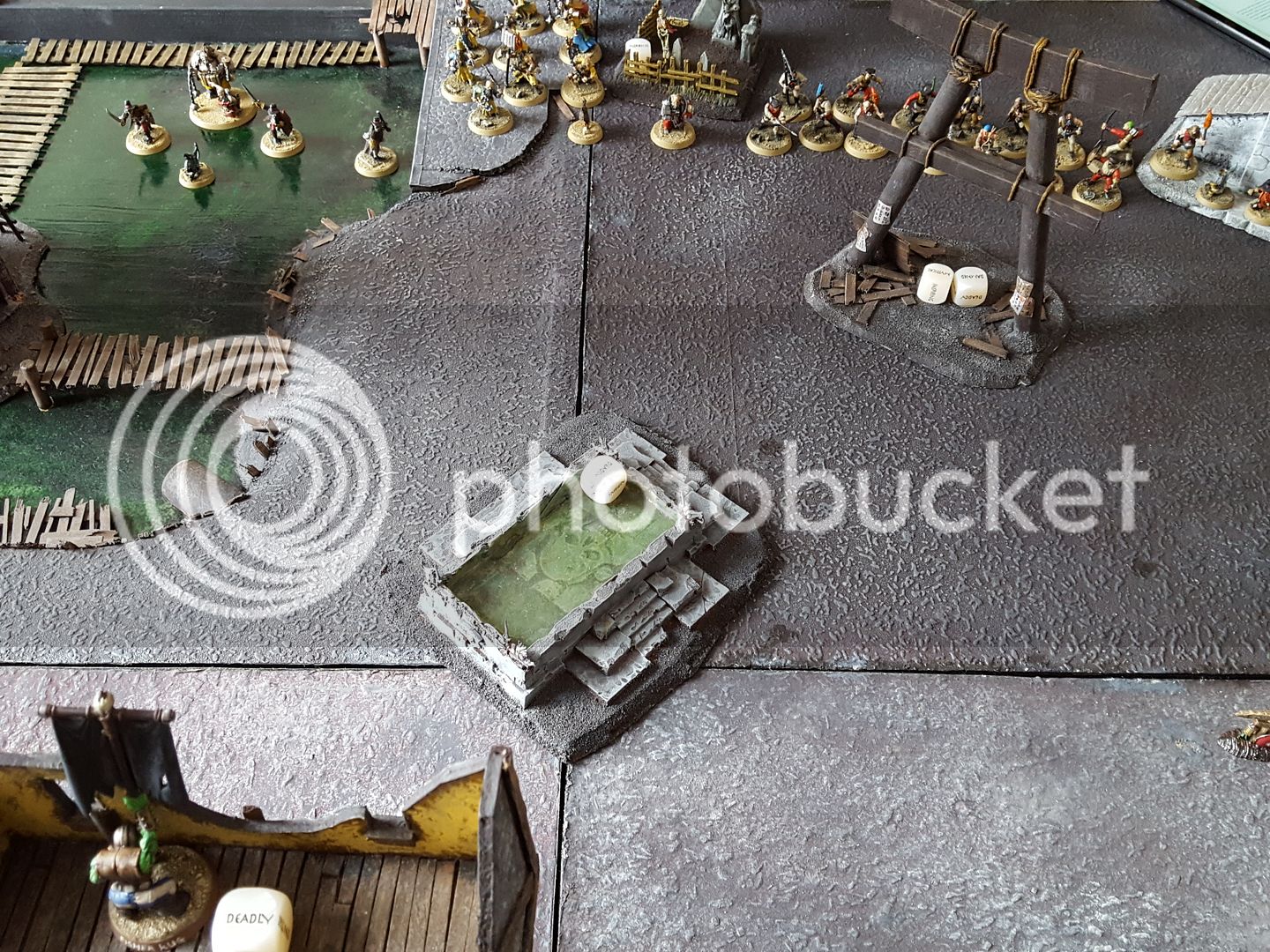 The Militia got confused in the fog and left behind as the rest of the congregation advanced without them.

Kaptain Mogrum gave orders to his crew to hold the central house at all costs and ducked down a secret tunnel into the neighbouring house!

Klaw, the River Troll, took another secret tunnel and left Mr Sludga and Lost Uzzog to hold the left-hand house on their own.

As the Church approached through the mist, a small number of dead bodies pulled themselves to their feet and shambled towards the Witch Hunters.

The Griffhound cried out in warning and gave the Witch Hunters time to ready a brace of pistols each. They neatly shot the deadwalkers through their heads and dropped them.

The noise awoke a dozen more deadwalkers though!

The Churches Militia made up for their earlier mistakes by risking a Hazardous Journey through the Realmgate - they stepped out of a corona of grey flames... into the centre of the orruk's stockade!

As they charged the Kaptain and Klaw two of them fell victim to the orruk pirates' traps! They wounded the Troll, but his natural regenerative flesh knitted itself back together. The Kaptain's armour saved him from even a scratch.

Meanwhile the deadwalkers lurched into the Witch Hunters' lines.

Once again they were dealt with swiftly but they were costing the Church dearly in time, holding up their assault on the stockade by vital minutes. More deadwalkers pulled themselves to their feet and reached out with grasping hands and rusted weapons for the Churchmen.

After Kaptain Mogrum slaughtered the last of the Church Militia, Klaw barreled into the Witch Hunter Captain and his Unforged companion.

Lost Uzzog blasted the Witch Hunters with the Gaze of Mork.

But they shrugged off the magical fires and dealt with the last of the deadwalkers...

Then charged into the central house.

The orruk pirates took a few casualties but gave back almost as good as they got.

Klaw the Troll fell but the Churchmen fell back into the mists leaving the pirates to tend to their few wounded crewmates.

The orruks still held two of the three loot stashes so they earned a minor victory for the Cleavermaws!
Posted by WarbossKurgan (Saul) at 16:45