This game was played using the "Hold or Die" Battleplan  with me as the defender, as I had 1 campaign point to Viktor's 3 points.

Viktor was allowed a force one third bigger than me (my 15 models to his 20). One third of my force started on table and Viktor only had to wipe them out to win a major victory. The rest of my force would come on turn 2, from my choice of table edge. I took first turn and used the Battleplan special Command Ability: All Out Defence (basically "Go To Ground" from 40k) on my tiny group. You can't move but get a re-roll to all your saves, you can still shoot and cast spells. 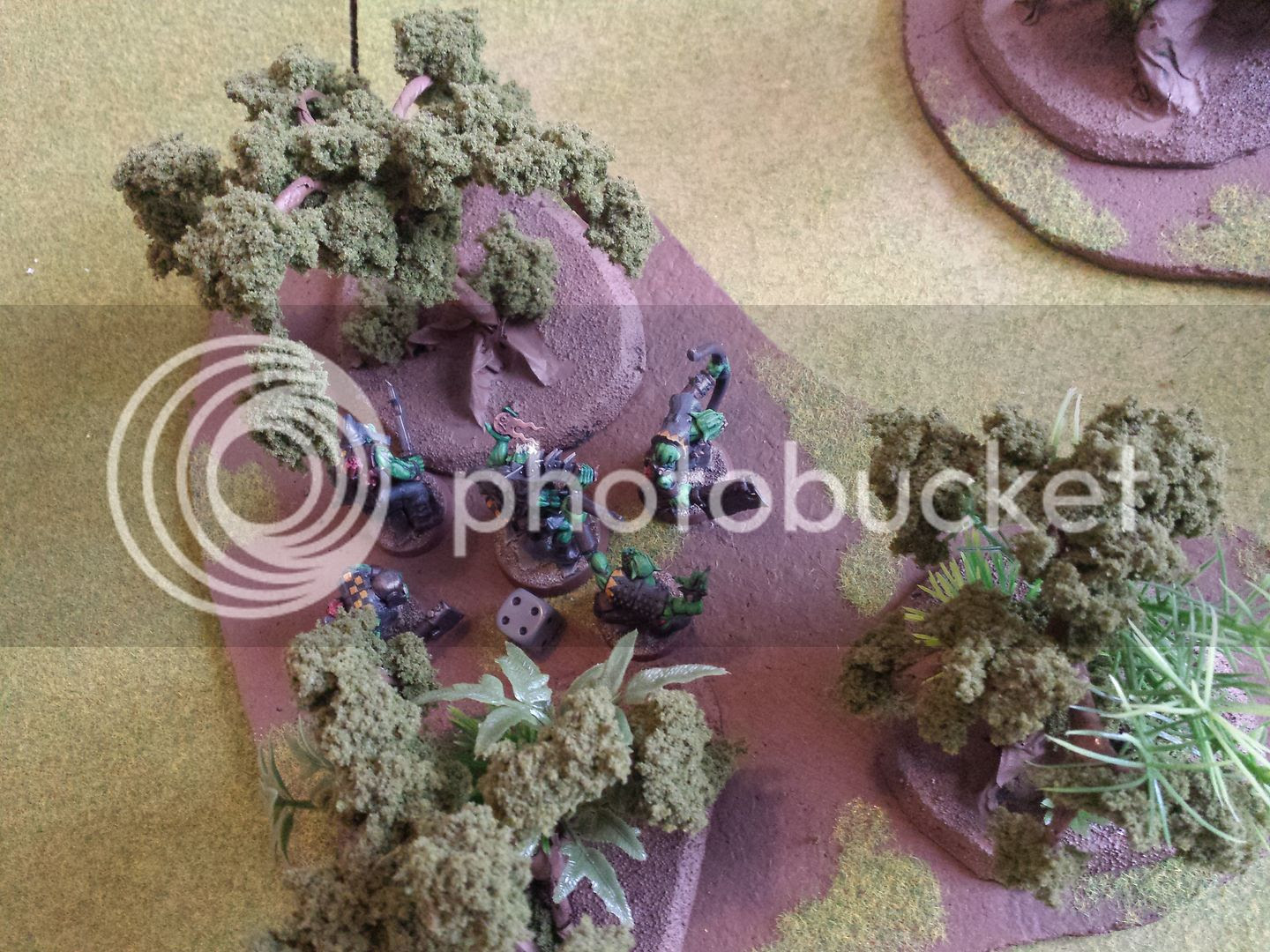 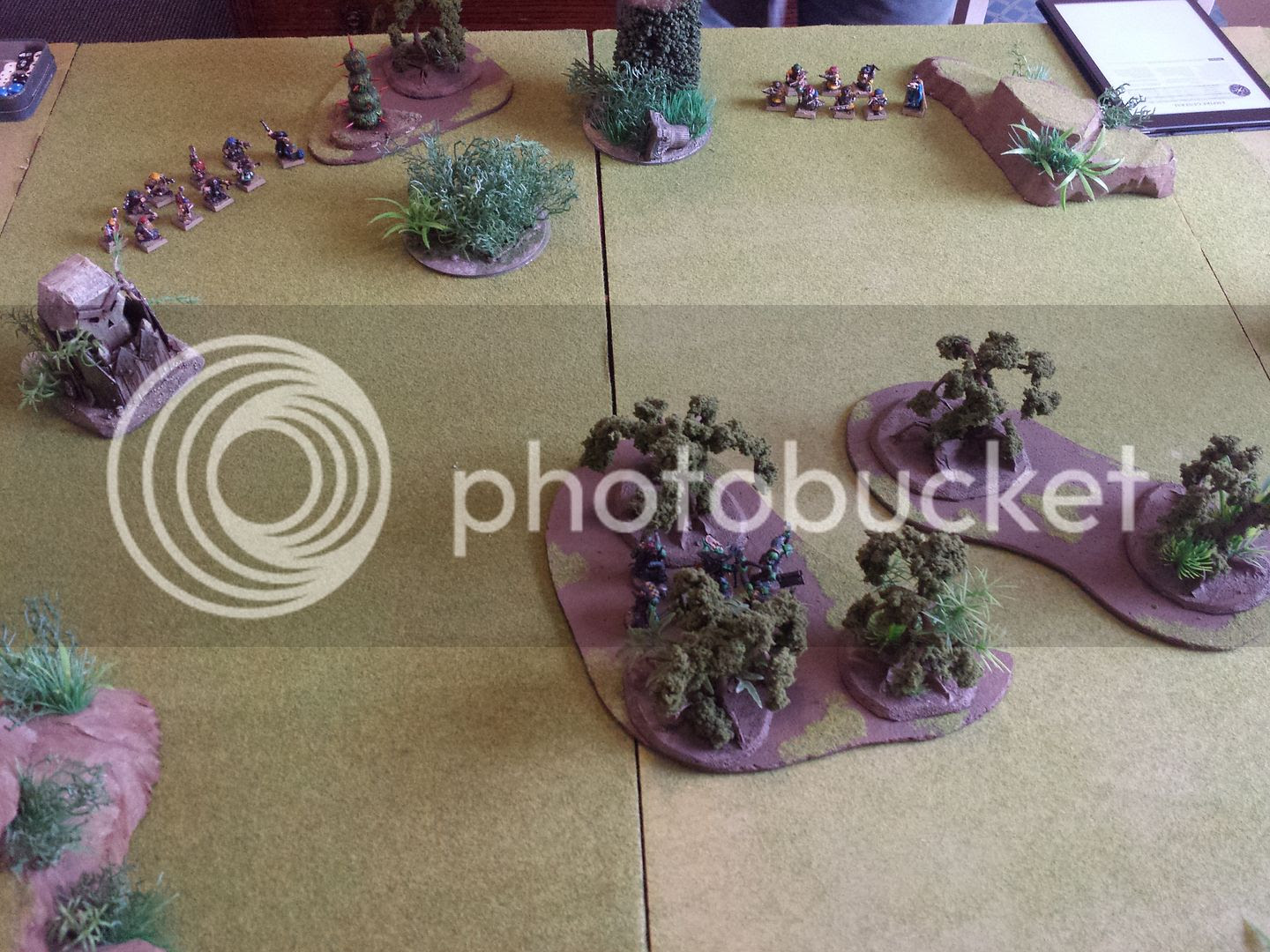 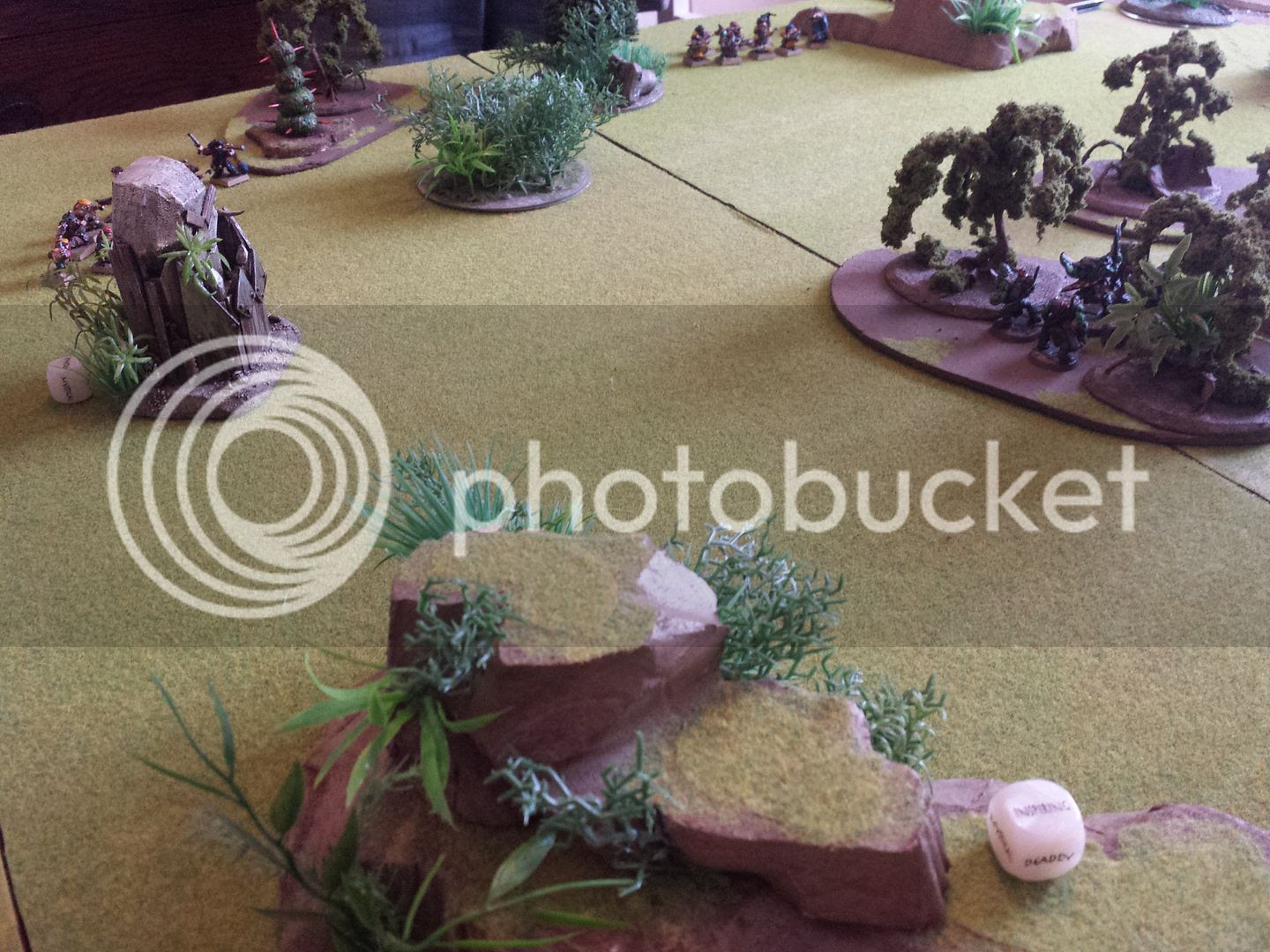 Dogear the Shaman and four Arrer Boyz of the Underhogz crouched in the Wildwood, watching the Duardin and their allies form up around them. Slayers and Gudrun the Duardin Lord to the north-east, Quarrellers to the north-west, the Warrior Priest and Pirate Captain to the south-west. They all closed in on the greenskins and started firing. One Arrer Boy went down. 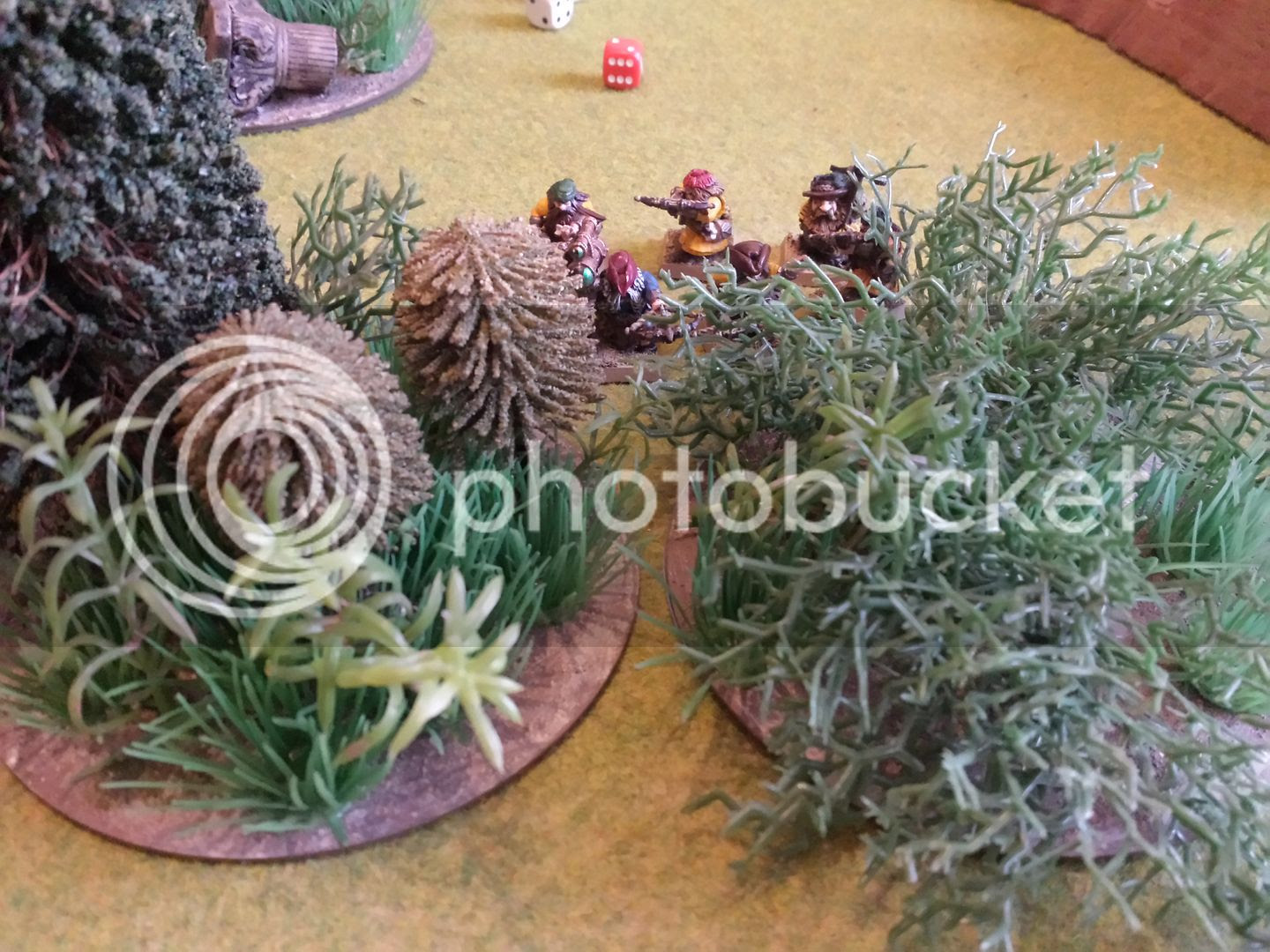 A Wildwood appeared between the Quarrellers and the Orcs, a Slayer and a Quarreller were killed by the corruption of Nurgle.
The Pirate Captain charged into the Wildwood and cut down two more Arrer Boyz (the last one fled), the Shaman counter attacked and wounded the Pirate. 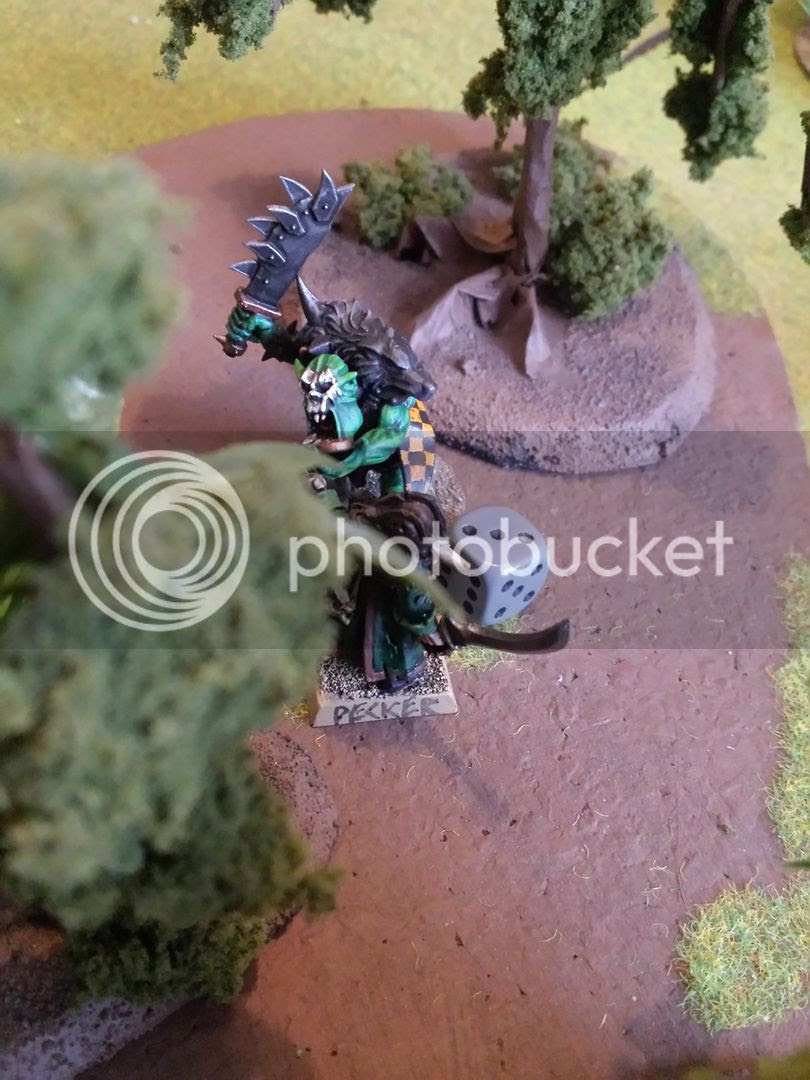 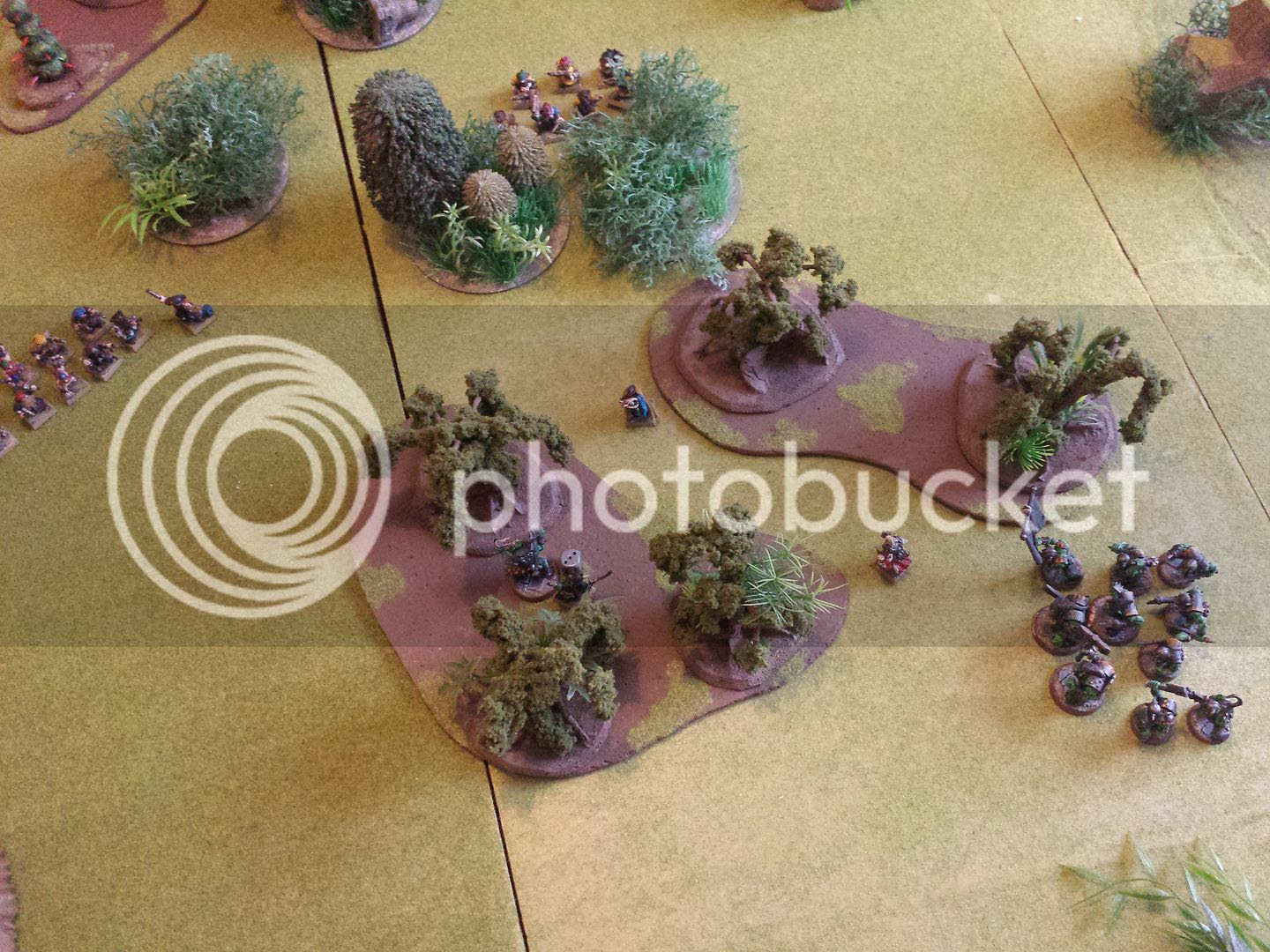 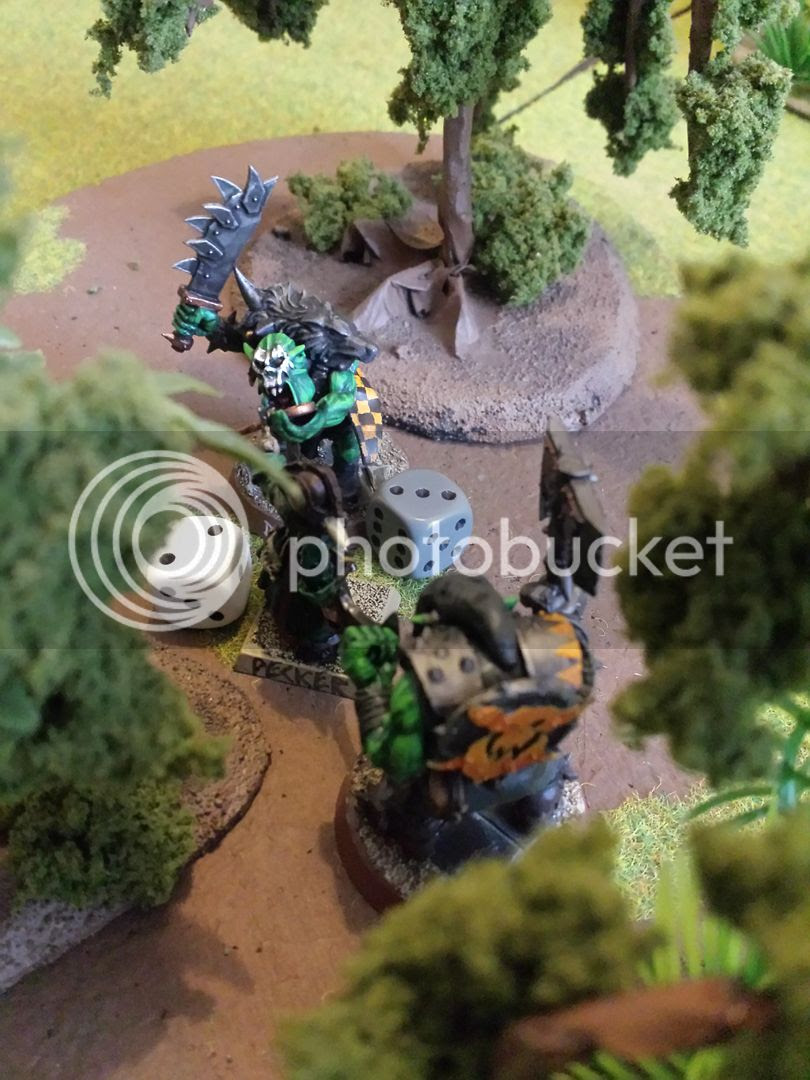 The Lurkerz, Warboss Dregtoof and Spitlock arrived close behind the Warrior Priest and charged. The Priest fell to the combined might of Warboss and Boyz. Spitlock charged the Pirate Captain. 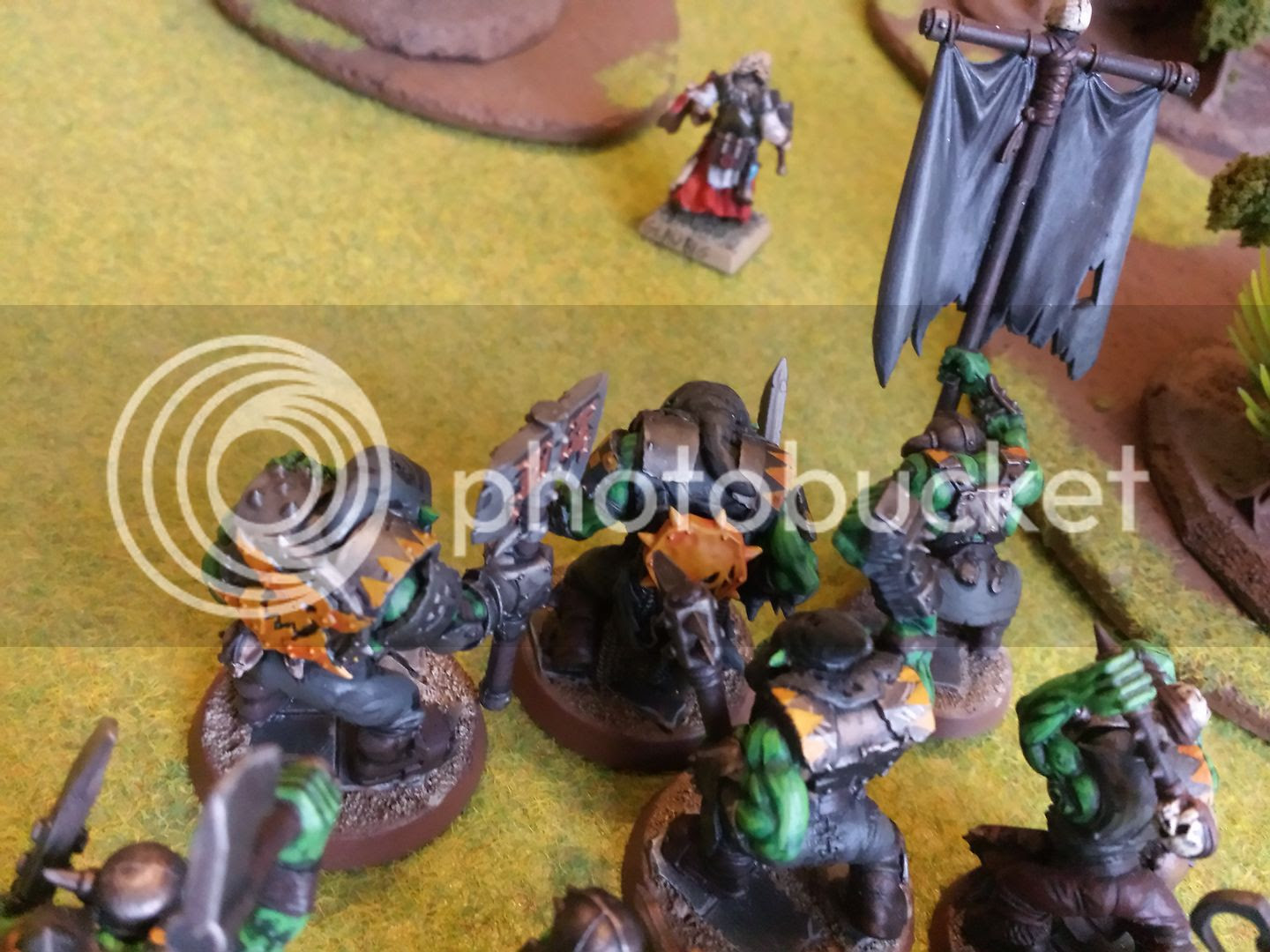 Another Wildwood appeared, this time behind a rocky hill to the south-west, far from the fighting. 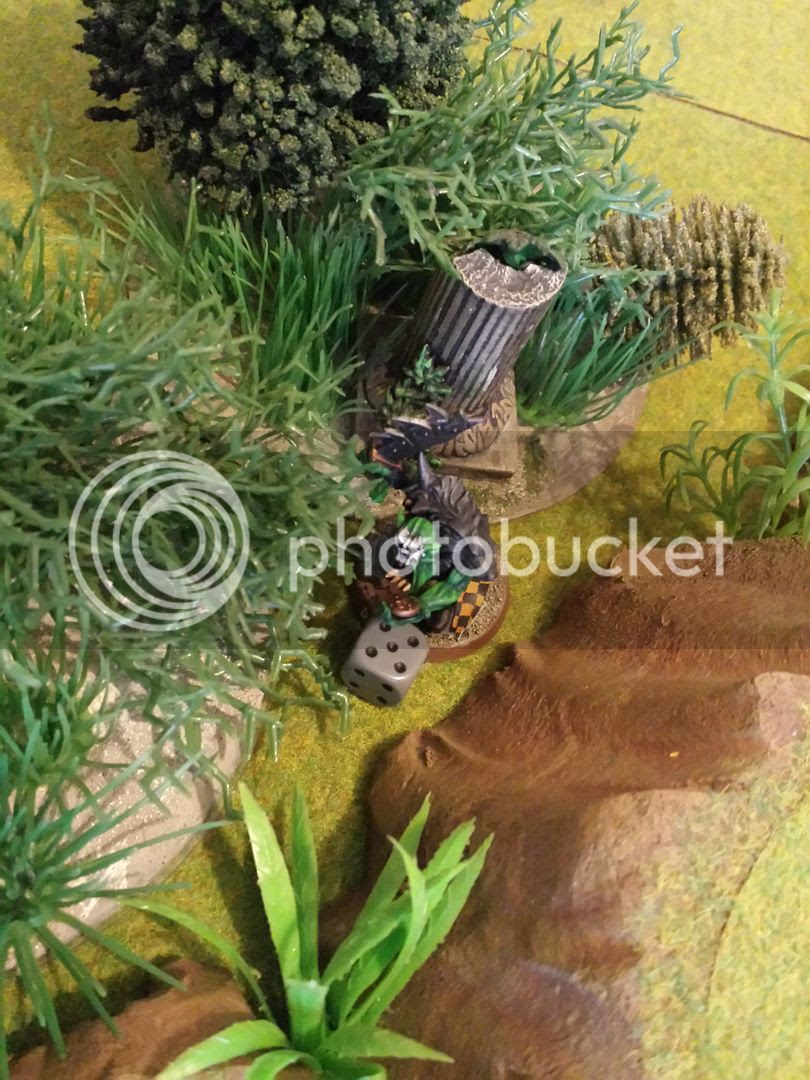 Dogear cast Gaze of Mork, but it was unbound. Then he used the Moonstone of the Hidden Ways (that the Orcs had found in an earlier adventure) to slip away, moving secretly from the central Wildwood to the distant hidden one! 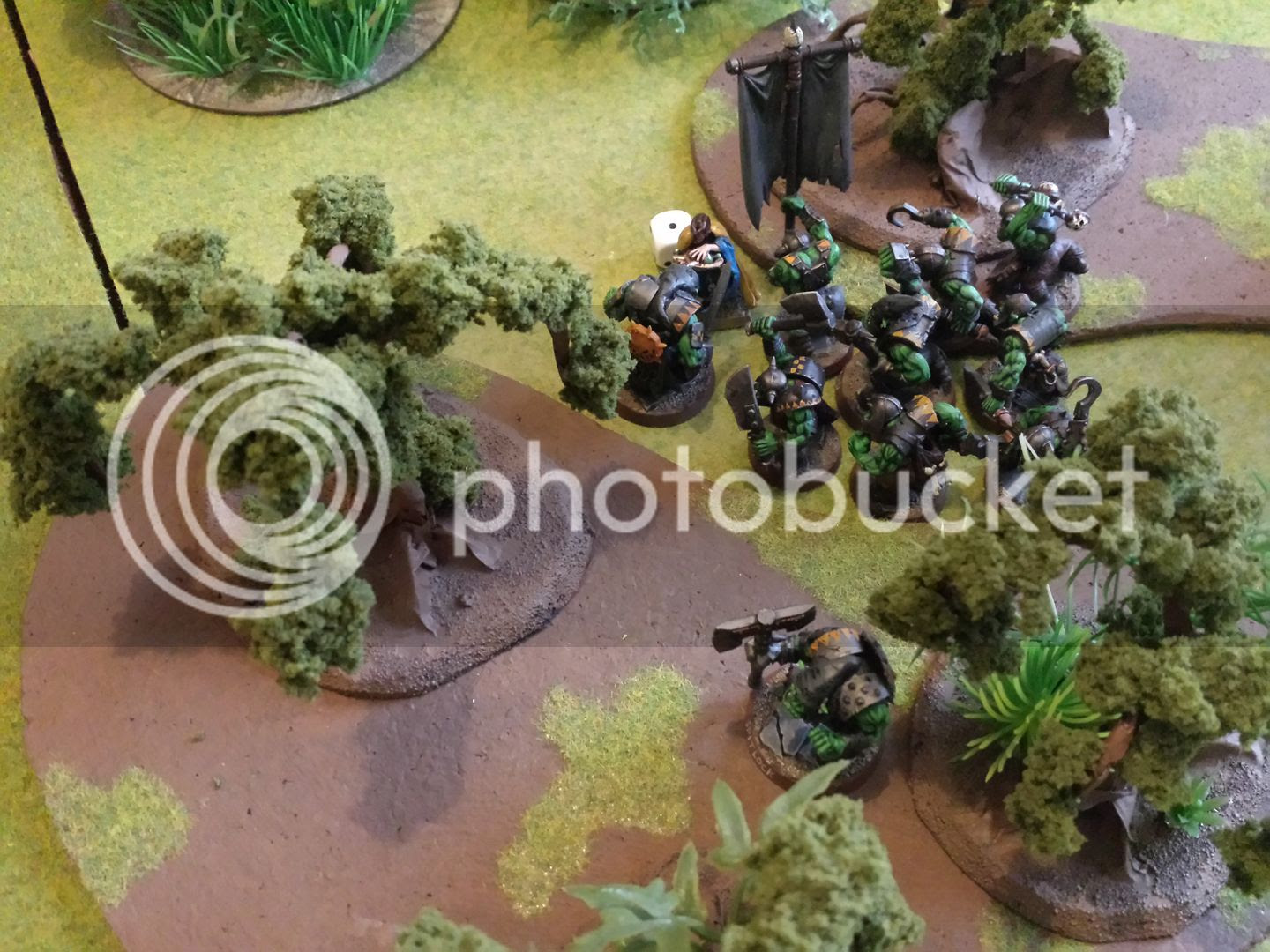 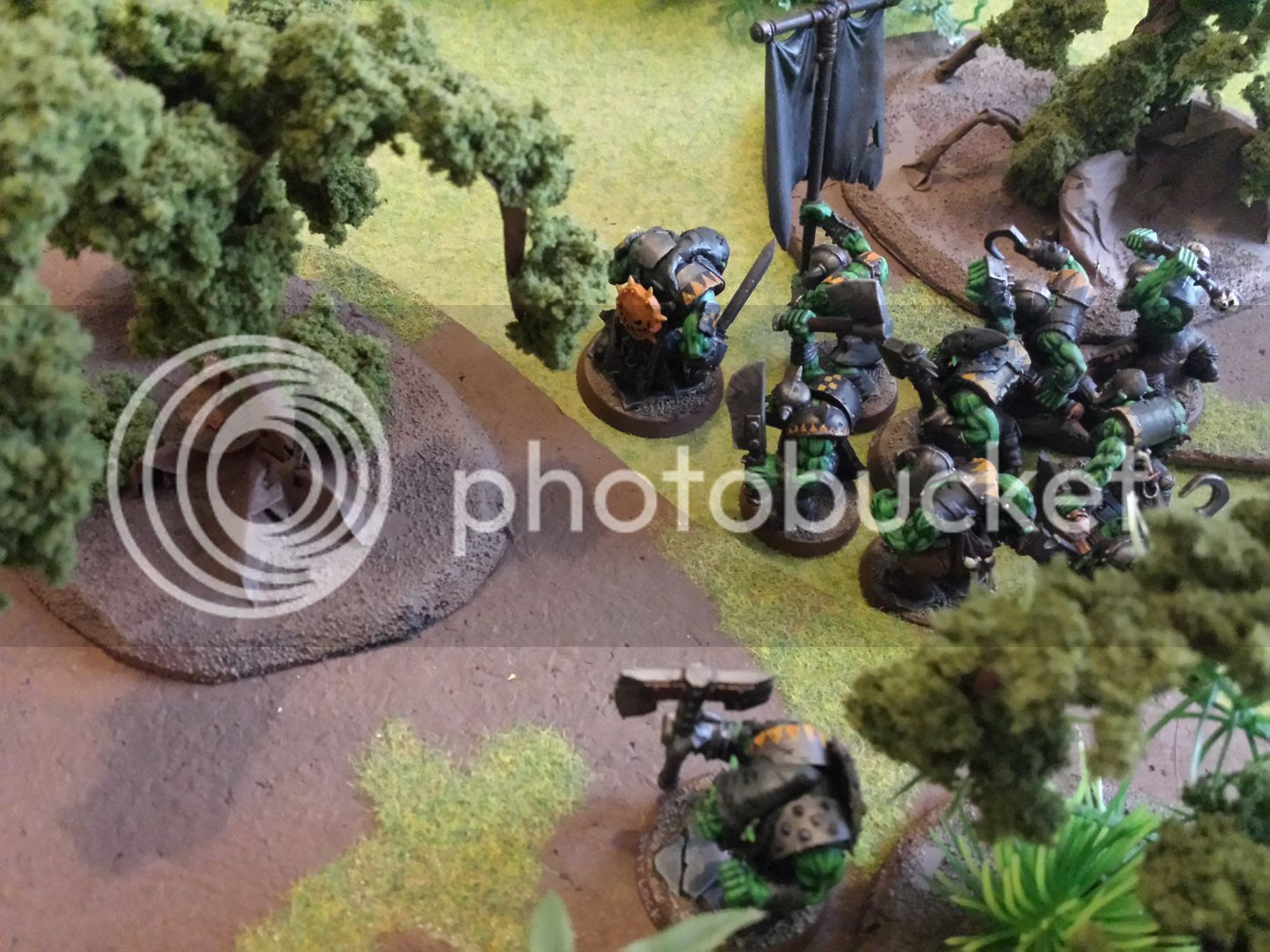 Spitlock smashed the Pirate Captain to the ground while Dregtoof and the Lurkerz fought the Quarrellers and slaughtered the Celestial Wizard. 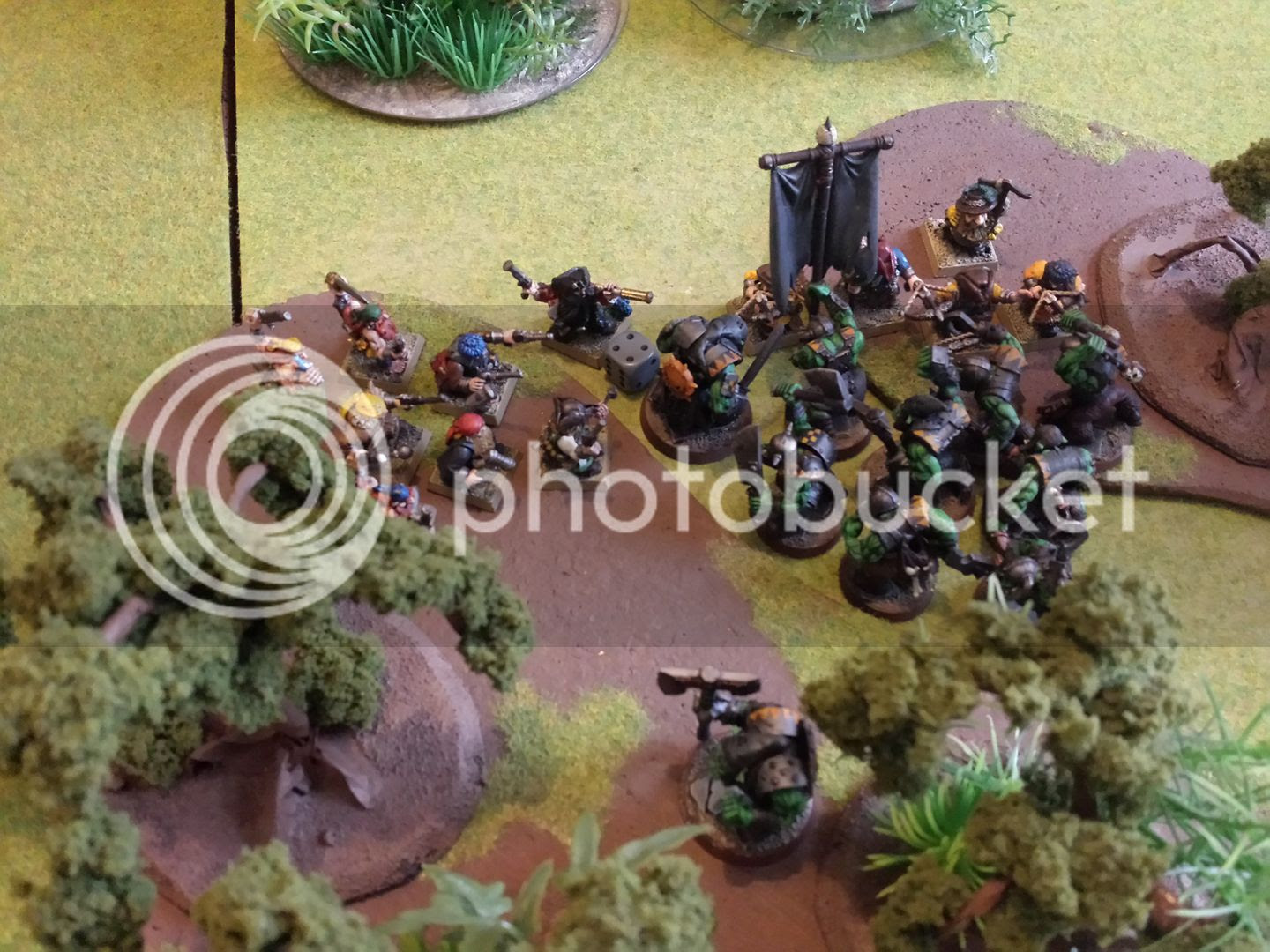 The generals clashed in the Wildwood and wounded each other, the Slayers finished of the Orc Warboss. Spitlock attacked the Slayers and took out several with his Slaughter Choppa. 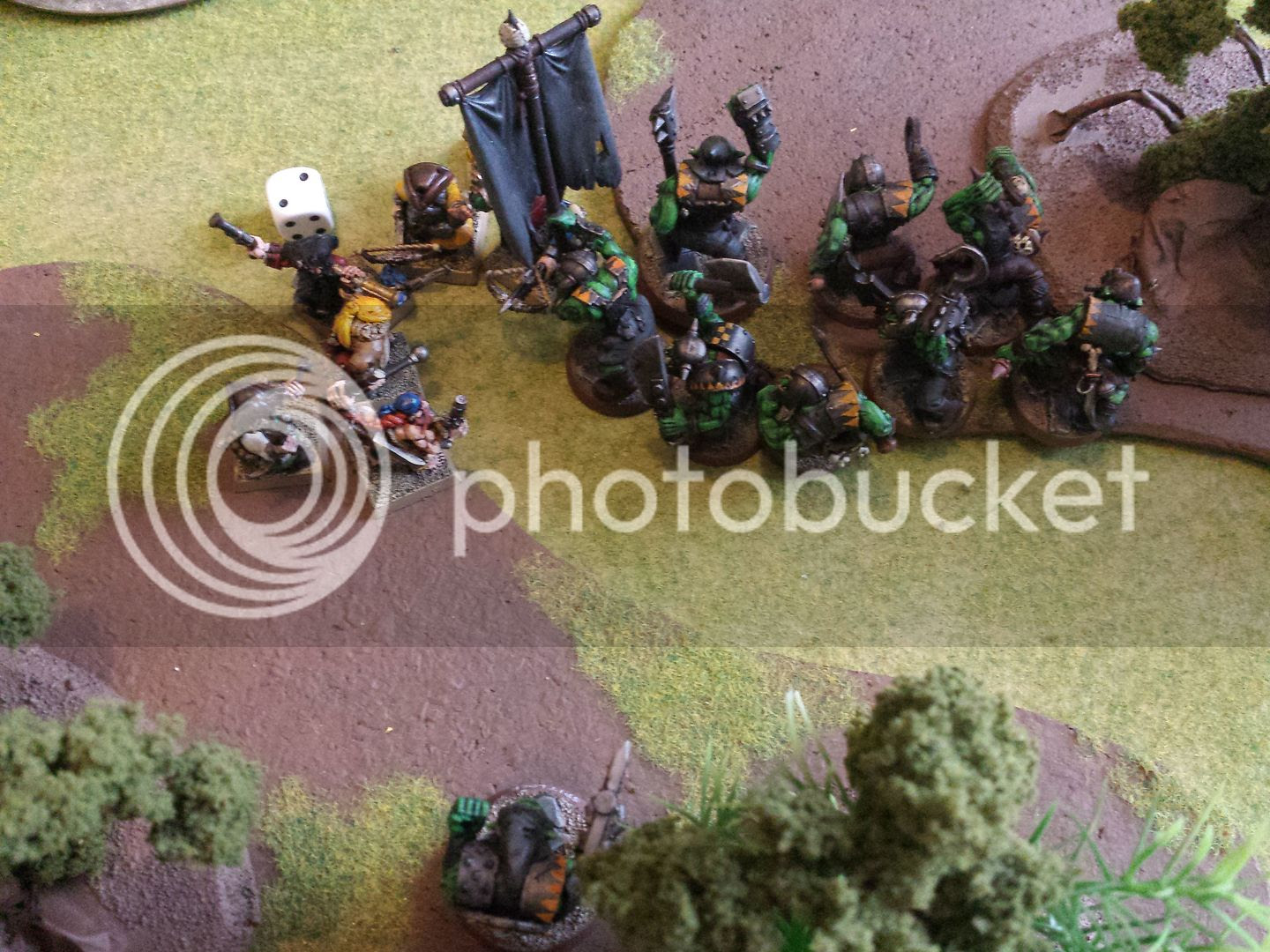 There was very little left of the Duardin force but the Orcs had only lost the four Arrer Boyz and the Warboss! Critically the Orc's starting force had a survivor - the hidden Shaman. 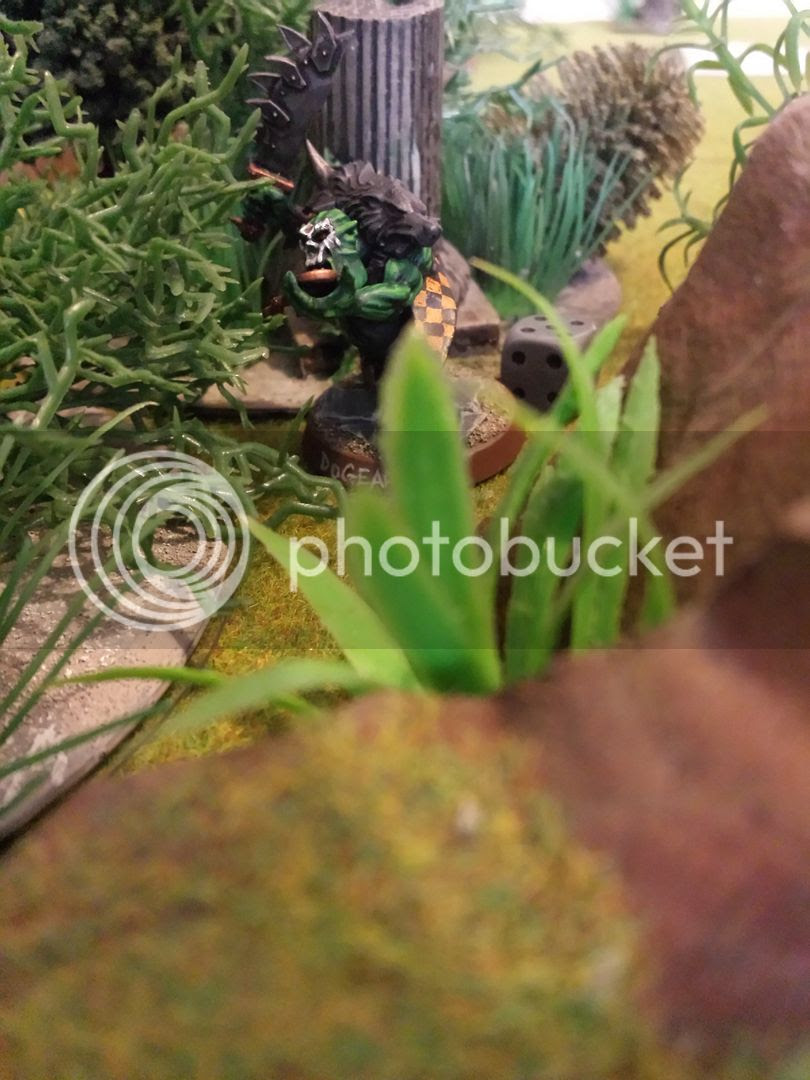