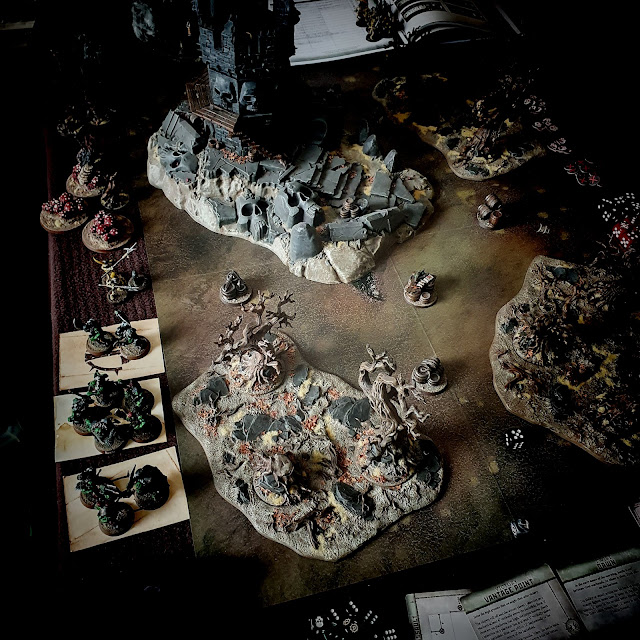 Inside the Freebooter's Tower a fire crackled in the grate and a bottle of rum was passed from hand to hand among the silent ship's company that warmed themselves. The charts, maps, books, letters and other manuscripts they had collected throughout the last few weeks now fed the fire. The crew knew that none of the papers contained clues to the location of the damned Twisted Oak - that information was certainly held by the Soulchemist Kalyustar and his Cursed Company. The Kapitan was in a black mood and none of the crew could think of anything to raise his spirits.
The Rotmoons looked nervously at one another, trying to appear relaxed and jovial, while also not drawing too much attention to themselves, for fear they would draw the Kapitan's wrath. He had been in a foul temper for a long time now and it was likely only a matter of time before he started impaling or shooting them if they annoyed him.
They all jumped when Francot, who was on watch outside, started shouting.
"On deck there! Movement in the forest! I think it be the Cursed Company, come a-calling on us!"
Kapitan da Leeva leapt to his feet. "If they are here, that means they need something from us what they can't get elsewhere. Maybe the trail to the Oak ain't yet cold!"
+++

To better read the map, the Cursed Company needs an elevated position such as Freebooter’s Tower. Unfortunately, they find it occupied by the Rotmoons. Just before the break of dawn, they launch a brutal attack. 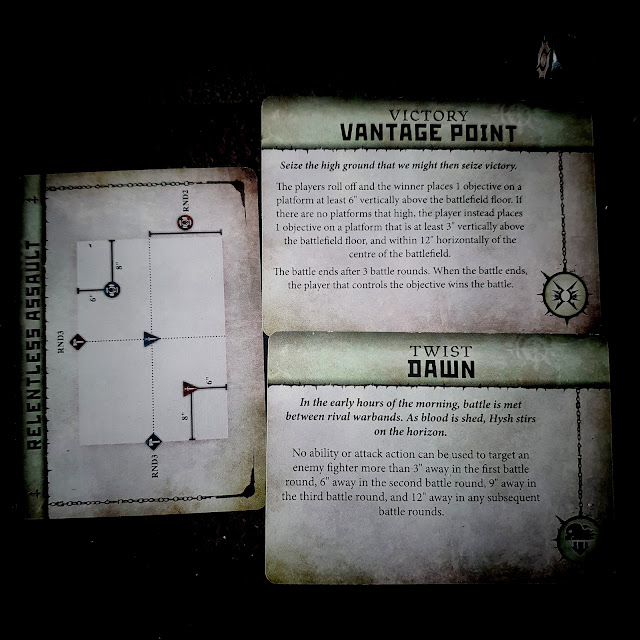 +++
Bortagno waited on the balcony outside the door to the middle level in the pool of light cast by the lantern hung above the door. Kapitan da Leeva strode out onto the stone steps that led down from the Freebooter's Tower, with Bold Rikk following close behind him. Francot waited at the foot of the hill for them, out of the lantern light.
El Doctoro and the rest of the crew made their way to the roof and peered between the battlements while they loaded their heavy blackpowder pistols.
The was the first time in nearly two weeks that the crew had seen the piratical glimmer return to the Kapitan's eyes. They were pleased to see it and even more pleased his ire was not directed at them! 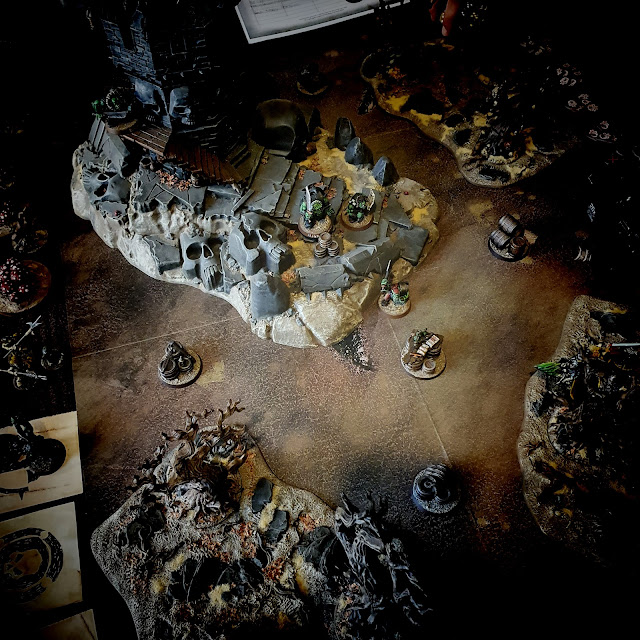 Several skeletal forms shambled out of the tree line. 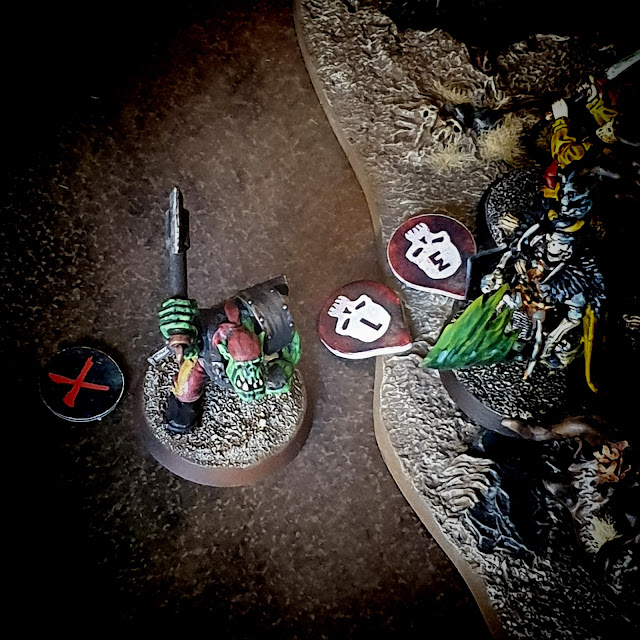 Francot raced forward and threw himself into them, flailing about with his kutlass with enthusiasm but very little skill. 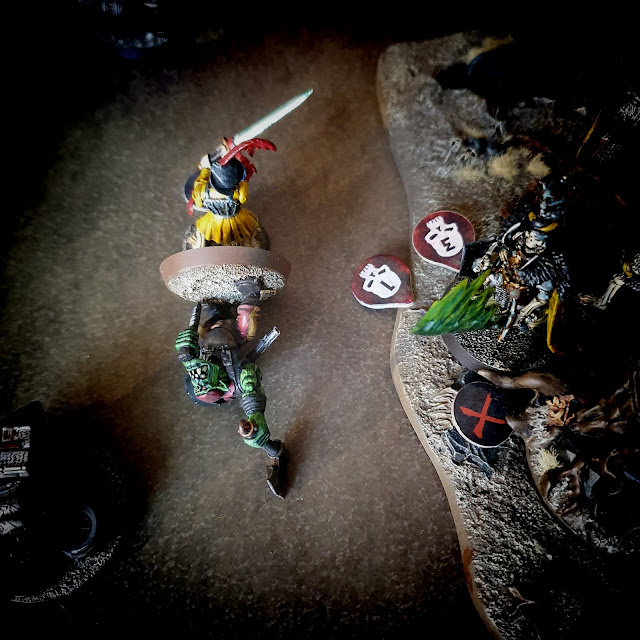 Two of the Deathrattle counter-attacked and he went down. 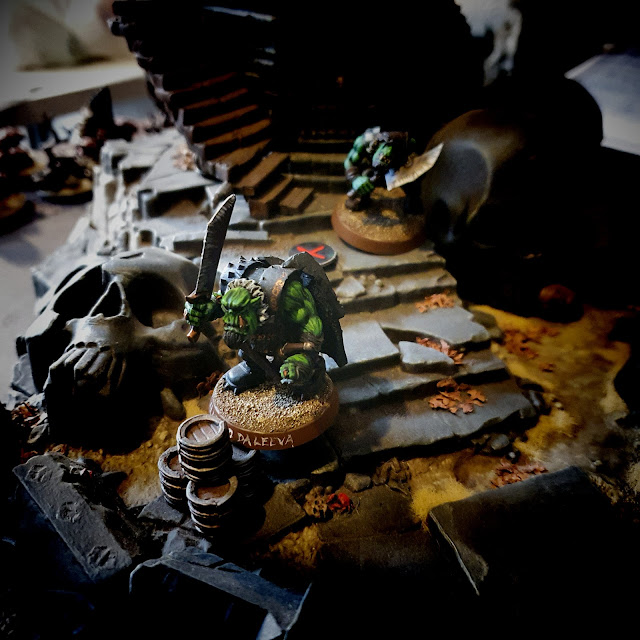 Bold Rikk backed up while the Kapitan braced himself for the oncoming charge. 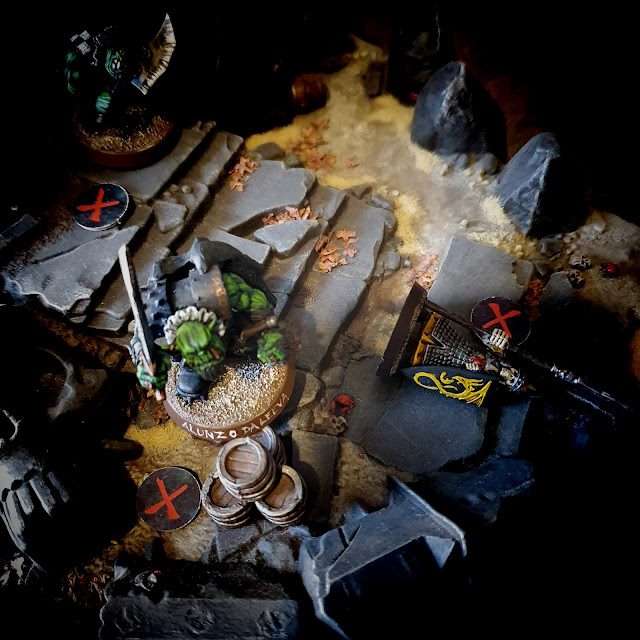 A skeleton aelf lurched towards him and caught him a glancing blow with a rusted spear but da Leeva cut it down with with heavy blade. 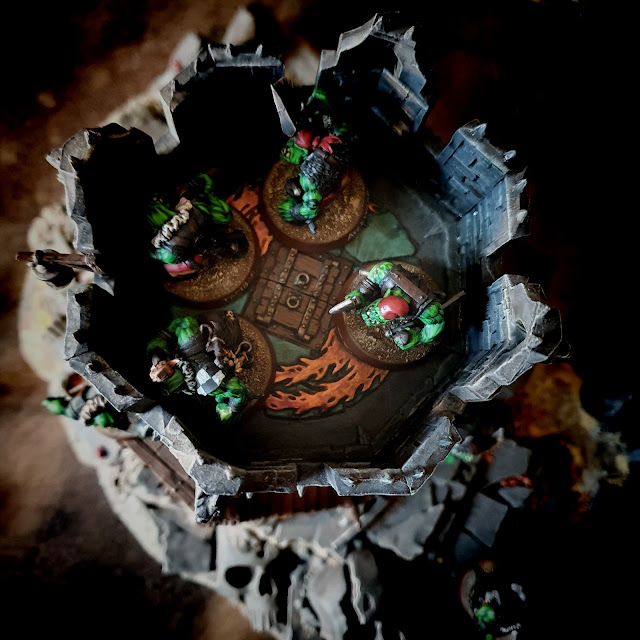 El Doctoro and the crew in the tower started shouting about the other skeletons they could see approaching from two different directions. 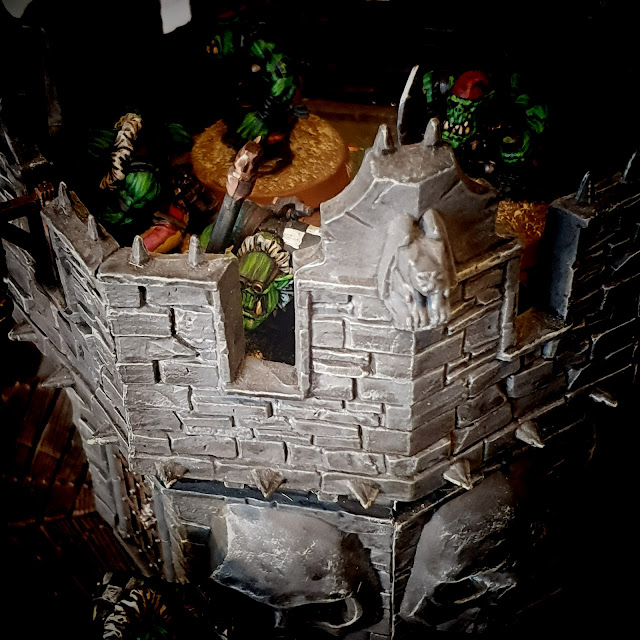 The Wardokk peeped out from the battlements cautiously. 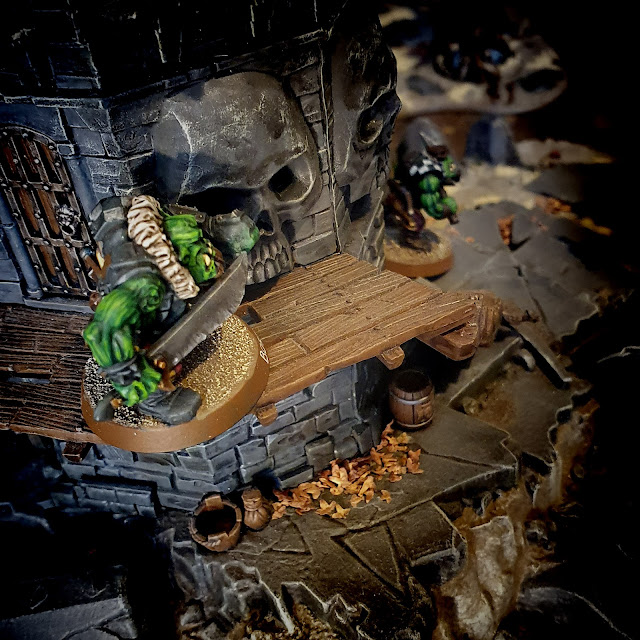 Bortagno got ready to join the Kapitan on the steps. He opened a small silver box and took out his  "magical artefact" a piece of Troggoth guts that he was sure contained mystical powers. 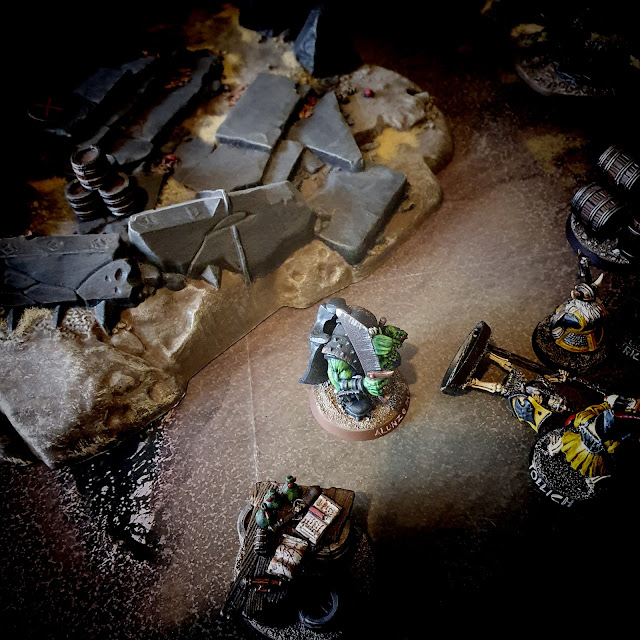 More skeletons moved up to the steps, so Kapitan da Leeva made a sortie - he ran out to meet them, smashed one to its component bones... 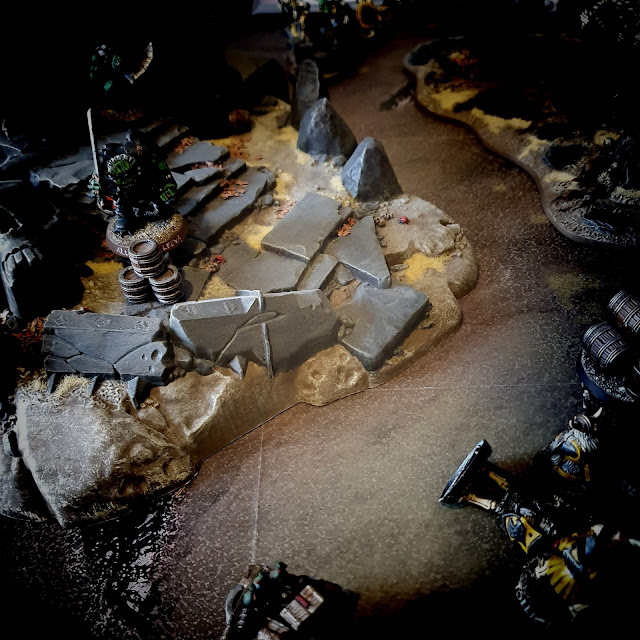 ... and quickly leapt back to his defendable position behind the stack of empty barrels. 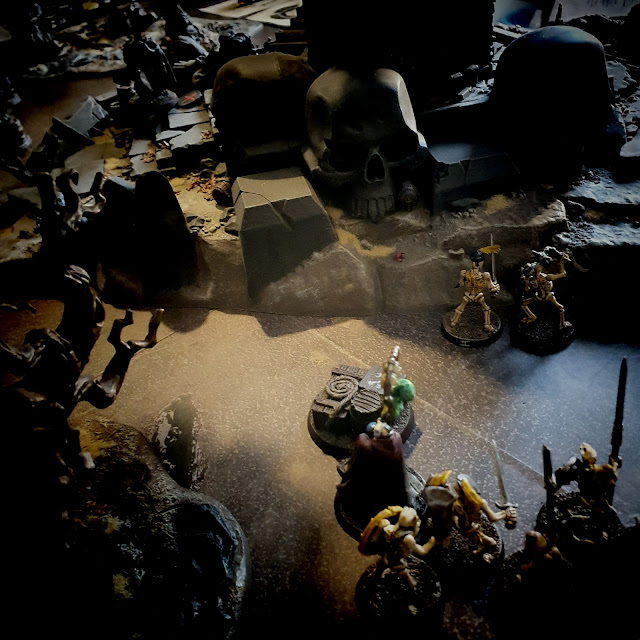 Kalyustar and his minions appeared from the shadows beneath the trees. 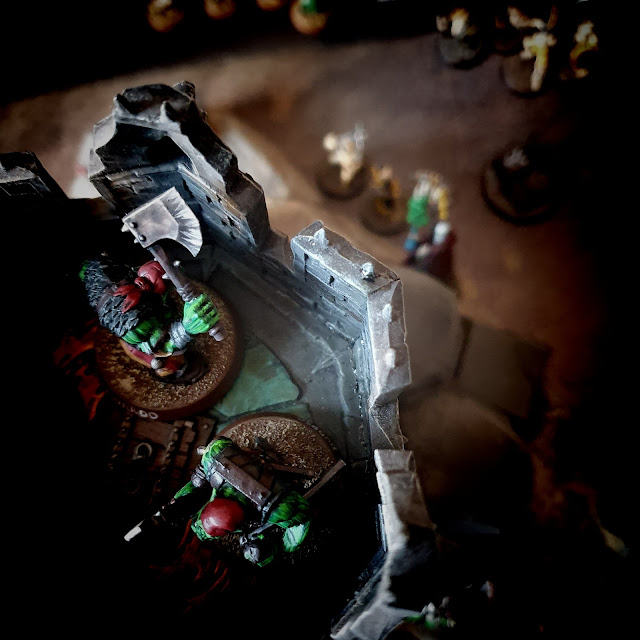 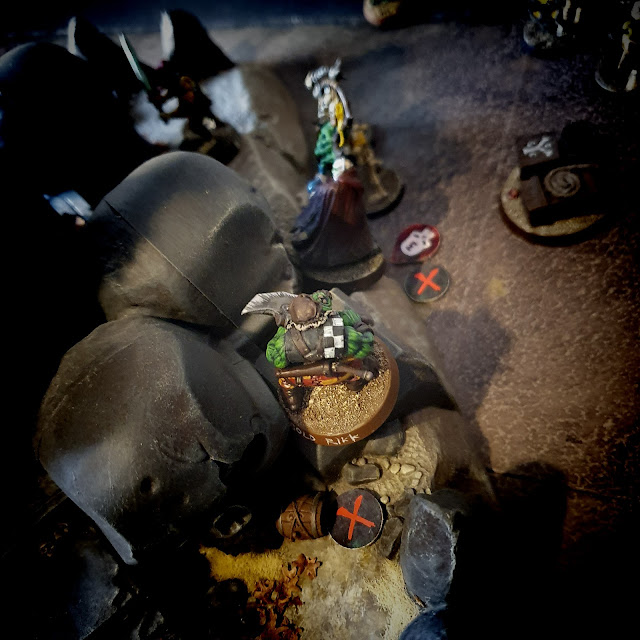 Bold Rikk jumped up onto the rocks overlooking Kalyustar's approach and fired both his heavy pistols. 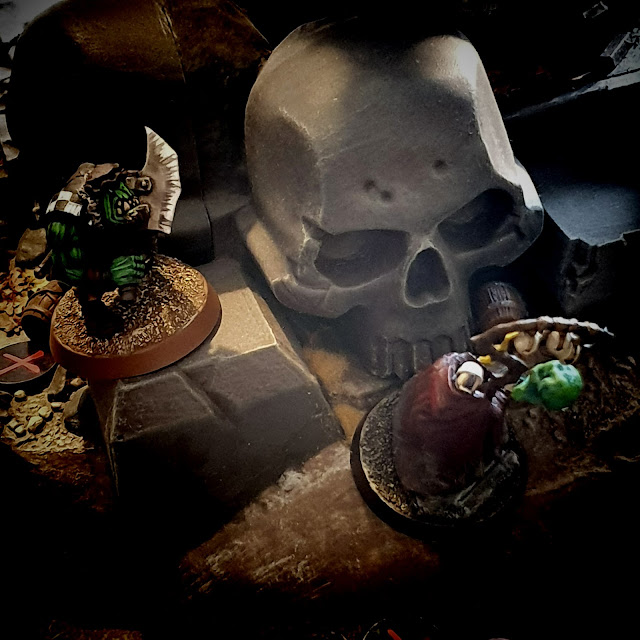 Kalyustar was lucky and was only skimmed. 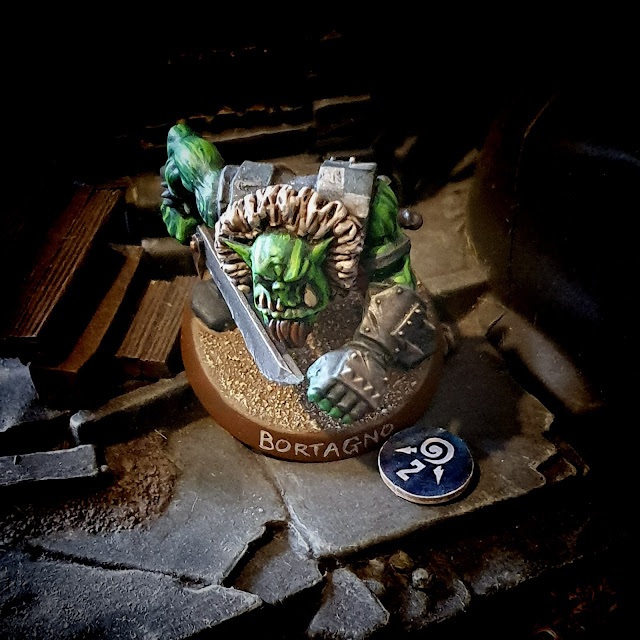 Bortagno winced as he swallowed the Trogg guts. It did not agree with him at all. His insides were twisted-up painfully. 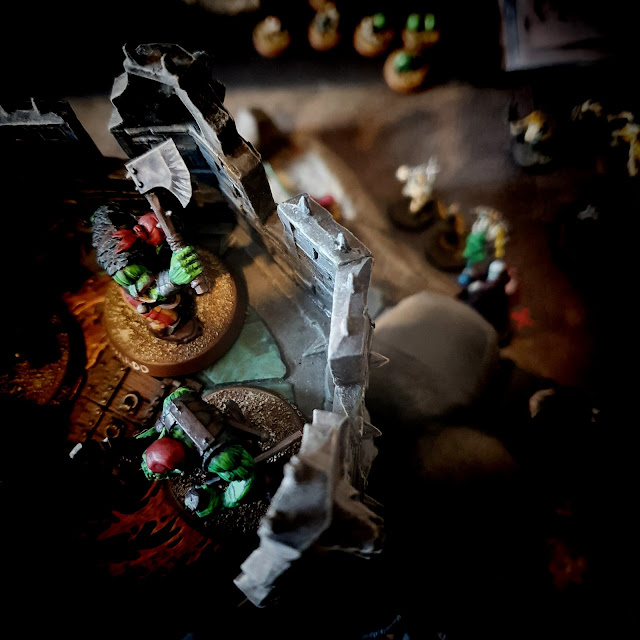 As the light of Hysh grew brighter Awkwardo could finally see the skeletons below clearly, so he fired a pistol at them. 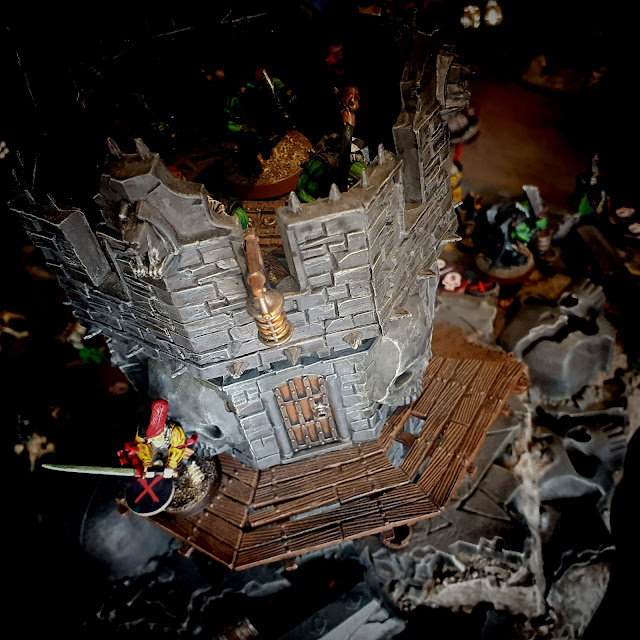 One of the skeletons clambered up onto the balcony. 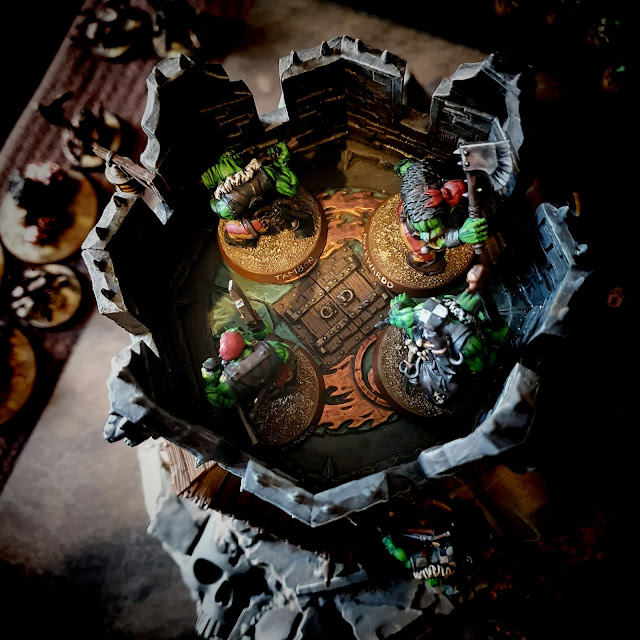 The Rotmoons in the tower shoved each-other out of the way so El Doctoro could send a sorcerous blast down at the necromancer. 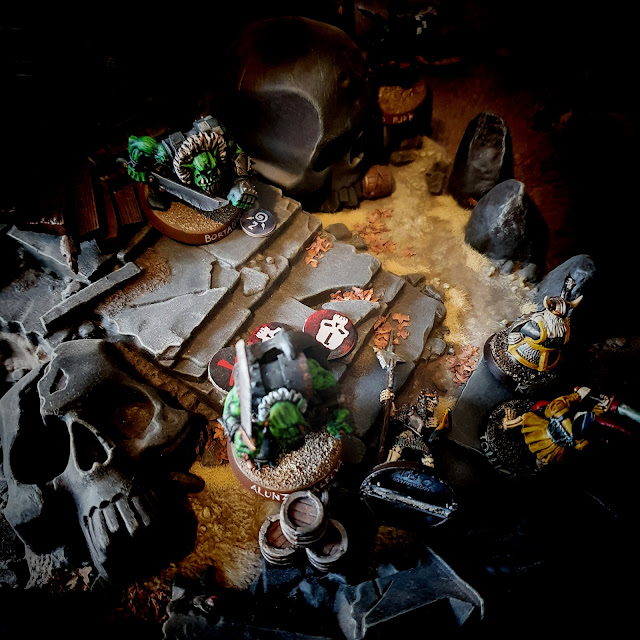 More skeletons advanced on the Kapitan, he knocked them down one by one - including the one he had already smashed, that had been rebuilt by the Wight's necromantic powers. 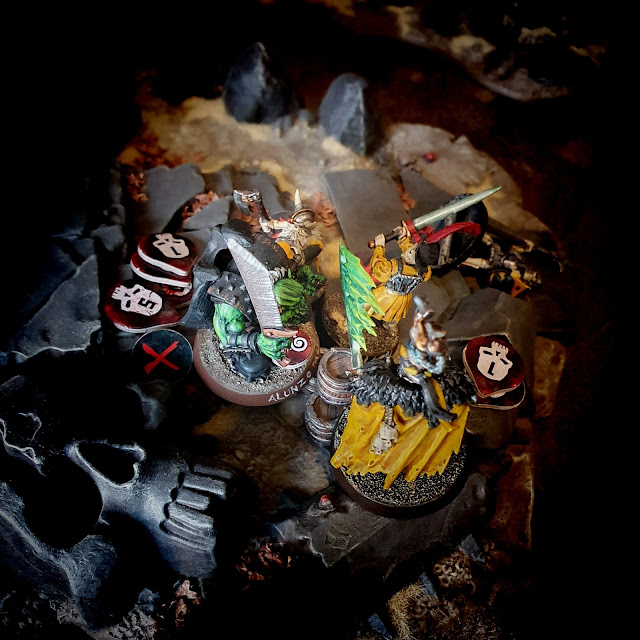 The Wight jumped onto the barrels and stabbed at the Kapitan. 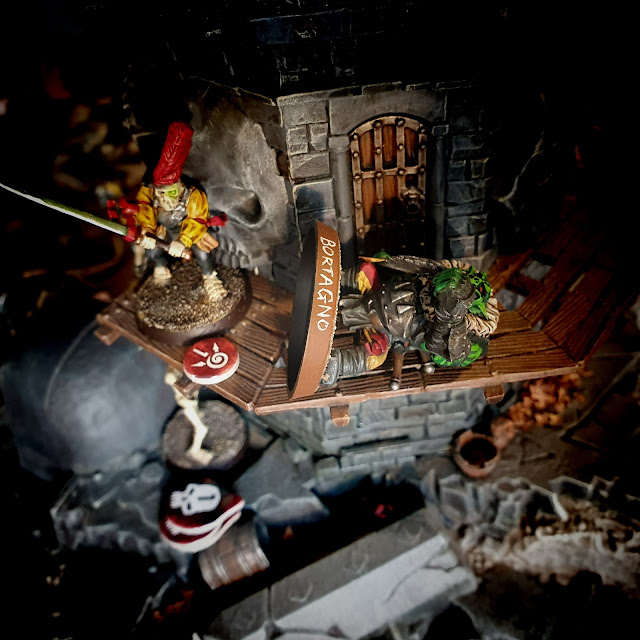 Bortagno, weakened by the bad Trogg's guts, fell to the slashing greatblade of a skeleton champion. 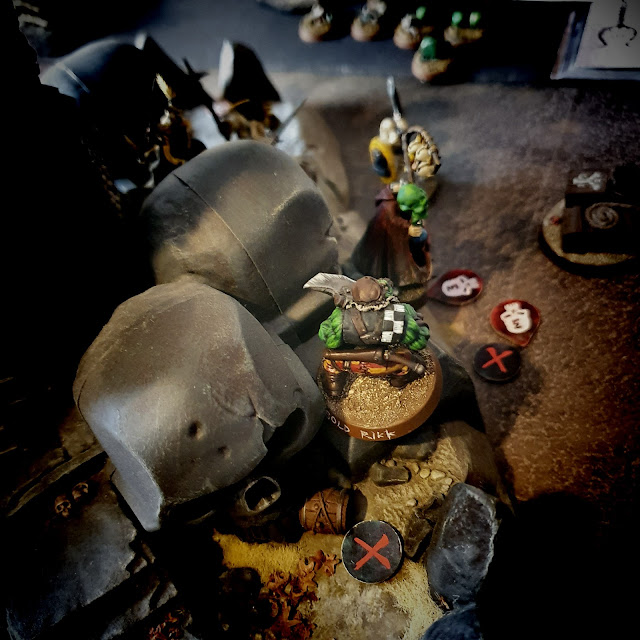 Bold Rikk fired another pistol at the climbing skeletons. 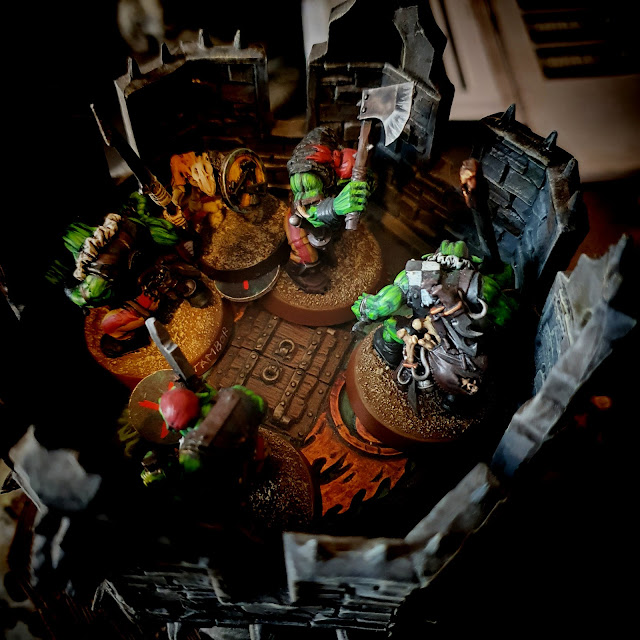 An undead skaven clambered up the tower and over the battlements. The pirates all shouted in alarm and angry, slashing at it awkwardly in the cramped space. 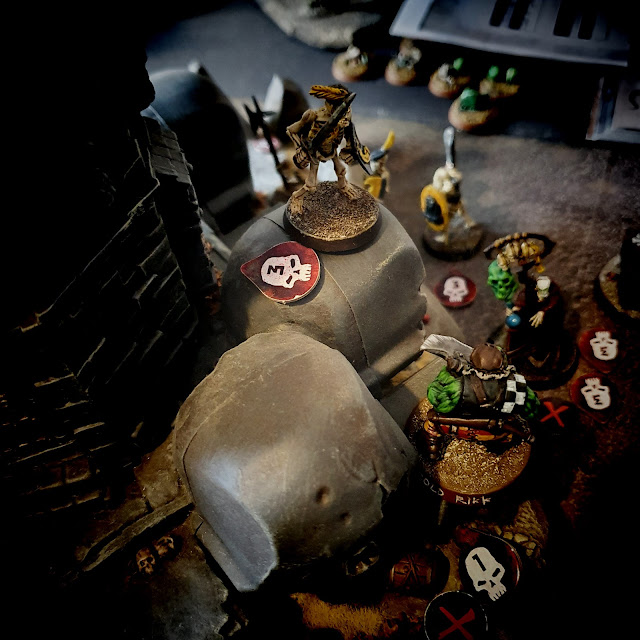 A Deathrattle clambered up on to one of the stone skulls and slashed at Bold Rikk. He shrieked and jumped back. 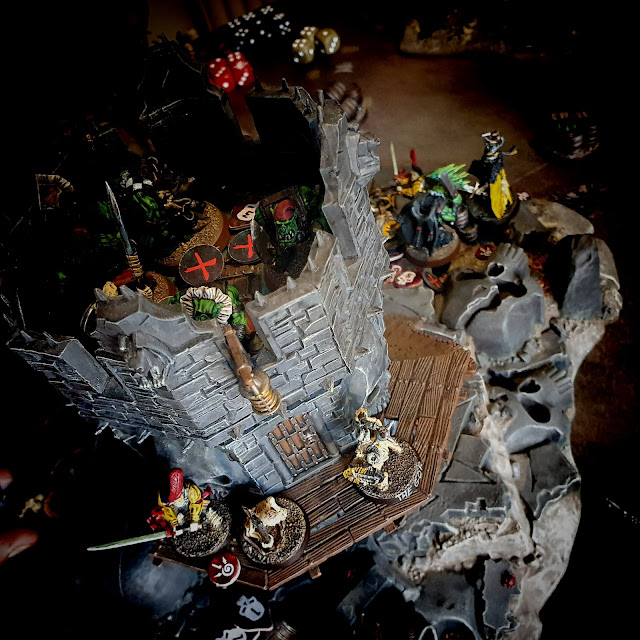 Tambor fired a pistol down at the growing number of skeletons that had reached the balcony. 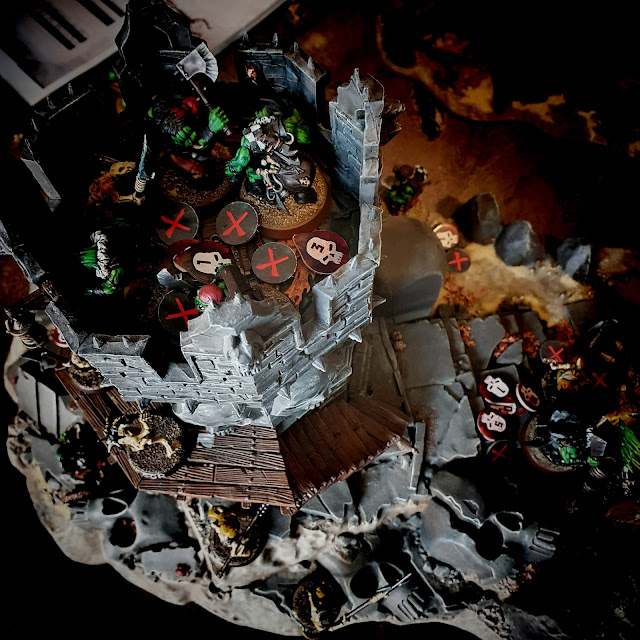 The Rotmoons managed to hold off the Cursed Company until full daylight and as Dragante and the rest of the pirate crew returned, noisily singing shanties and oblivious to the fighting, Kalyustar and his minions fell back into the dark forests...
+++
With this victory for the Rotmoons, Viktor and I are now drawing in the campaign. I can't play for the next couple of weeks but David and Viktor are going to try to get some games in. We decided that those games will be our tie-breaker to see which way the next phase of the campaign heads. If Viktor wins more games than David he will be counted as ahead in the campaign, so I will be the Challenger in The Hunt for the Fiend of the Harrowmark! ('Menagerie of Horrors' from Monsters & Mercenaries). If David wins more games then Viktor will Hunt for the Fiend.
Posted by WarbossKurgan (Saul) at 10:18