Dawn broke over the Freebooter's Tower. The door opened and one of the Rotmoons went outside. In the ashes of the cold fireplace a charred page from a burned book fluttered in the breeze. For some reason it caught the eye of El Doctoro and the Wardokk looked more closely at it.
It was a hand drawn map!

He did not remember seeing the scribbled markings when they had been searching through the piles of looted papers. He hand was shaking slightly with excitement as he reached out and pulled the singed sheet from the grate. He wasn't sure how they could have missed it but this looked like exactly the thing they had been looking for!
He dusted off the paper and placed it carefully on a desk by the small window. There in the centre of the page was clearly marked: The Twisted Oak - less than a league from another familiar landmark - The Charybdis Occulum. Scratchy text next too the Occulum indicated that the secret of the Twisted Oak's location would be found inscribed on the walls of the arcane building!
He pulled out his log book and found a page with his own map of the local area. Sure enough, there was the Freebooter's Tower, Black Rocks and the Charybdis Occulum, all on the same page! 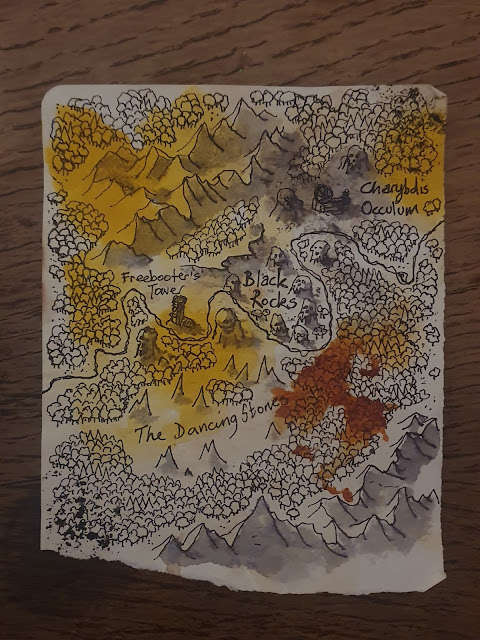 The map said the Twisted Oak lies close to the Charybdis Occulum, the final clue to its location hidden in the ruin’s engravings. Determined to beat their rivals to the damned tree, the warbands close around the arcane observatory.

Terrain: The Charybdis Occolum in the centre of the board.
Deployment: Knife to the Back (Symmetrical).
Victory: The Hidden Vault. The winner of ‘Getting High’ is the defender.
Twist: Arcane Inscriptions.
Reward: the winner discovers the location of the Twisted Oak (fluff reward) and receives an Escalation Command Trait (Tome of Champions 2020, page 104). 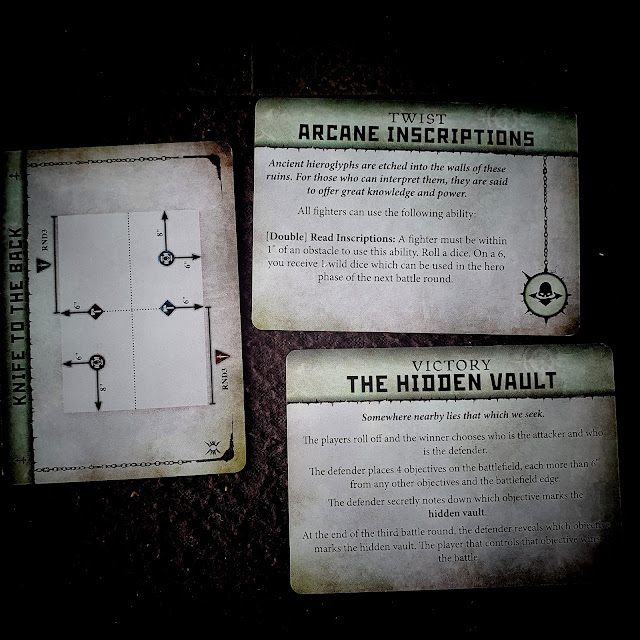 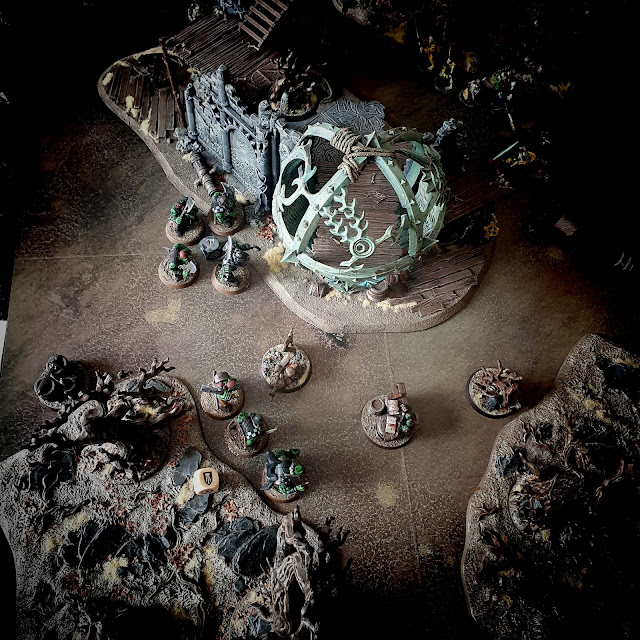 So the Rotmoons set off to make the hazardous march from the Freebooter's Tower to the Charybdis Occulum, avoiding the necromancer at Black Rocks if they could. As they marched through the forests they sang their horrible gutteral shanties. Occasionally one of them caught sight of something moving in the trees ahead of them but, unexpectedly, nothing ever seemed to come of it. 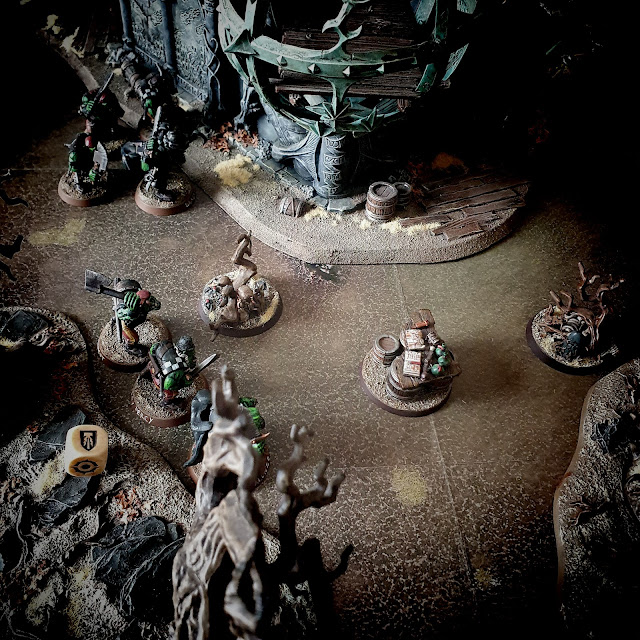 When they reached the arcane ruins they were surprised to find a number of new sapplings growing, something they had never seem in the Harrowmark before. El Doctoro was immediately suspicious that they meant something and asked the Kapitan if the crew could collect them for him. 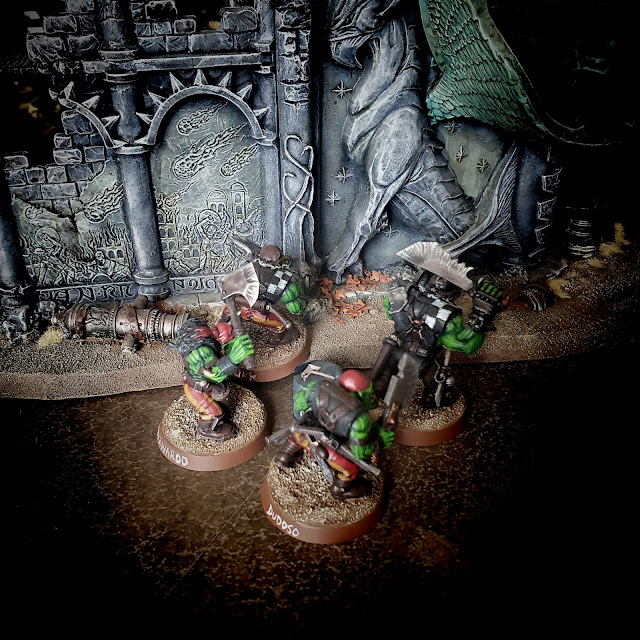 Dragante was distracted by the carvings on the walls of the Occulum, but he couldn't decipher them, so he quickly gave up. 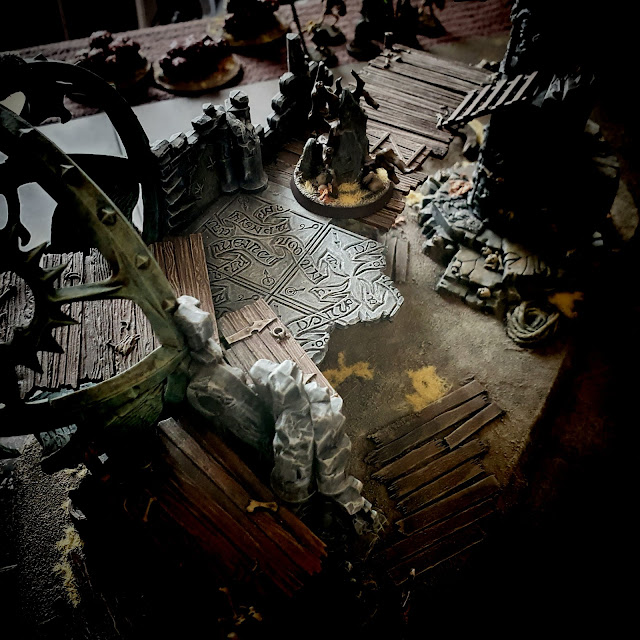 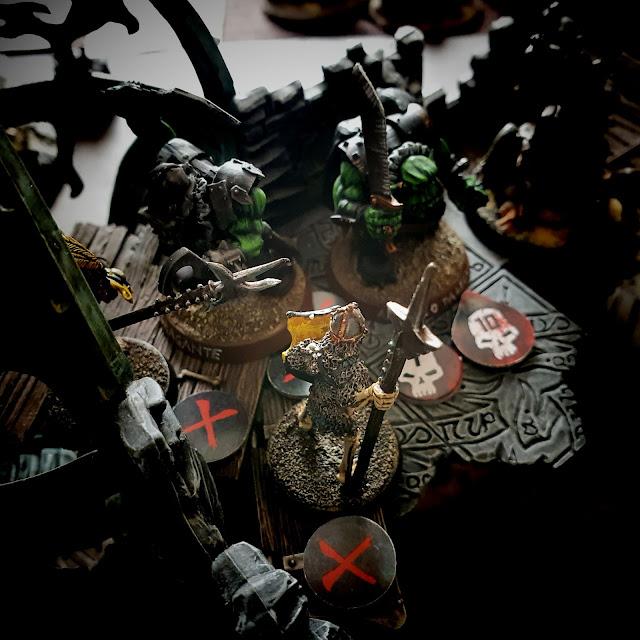 The Kapitan and Dragante started pulling at the small tree growing from the deck of the Charybdis Occulum and suddenly a number of Deathrattle skeletons appeared and started attacking them! 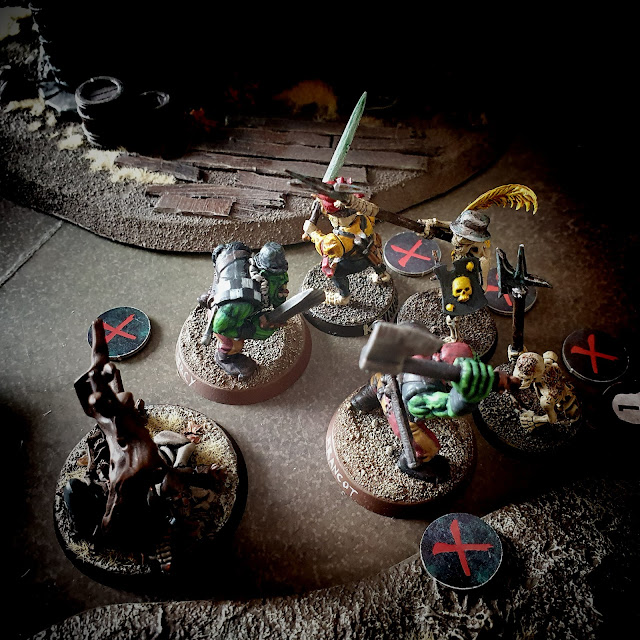 Da Leeva's warning shouts to the crew came just in time as more Deathrattle poured out of the ruins and trees. 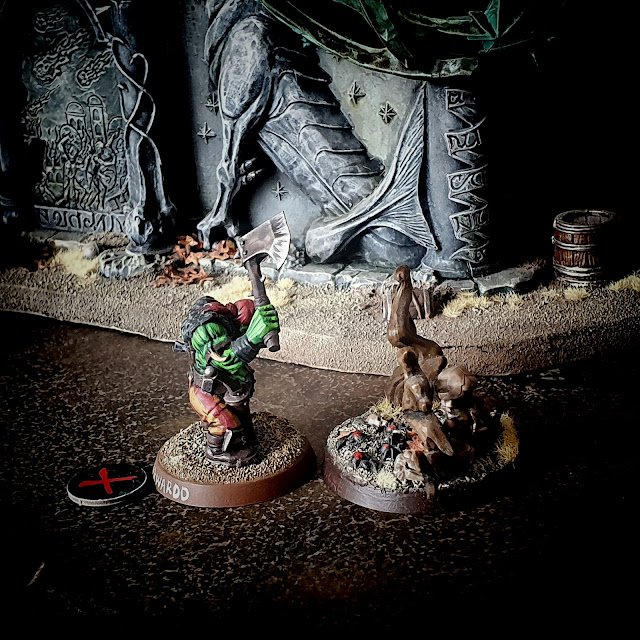 Awkwardo started stamping on the hideous spiders that swarmed all over the sappling he had been ordered to uproot. 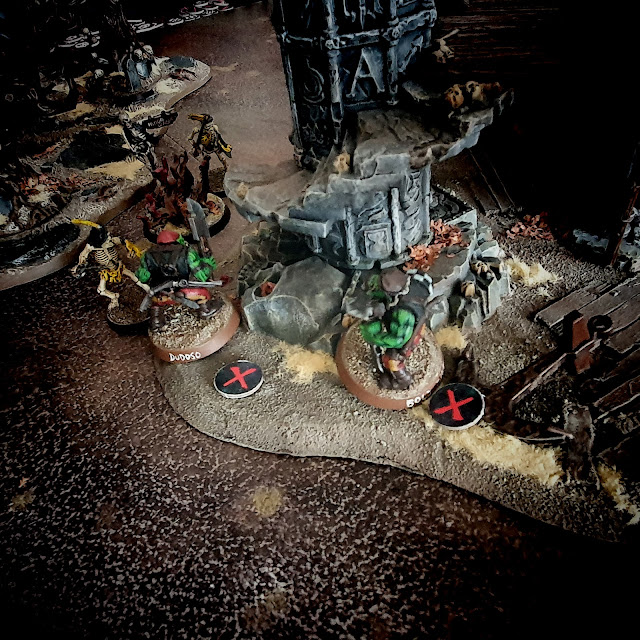 Dudoso and Bold Rikk made their way around the ruin and found another clutch of skeletons approaching. 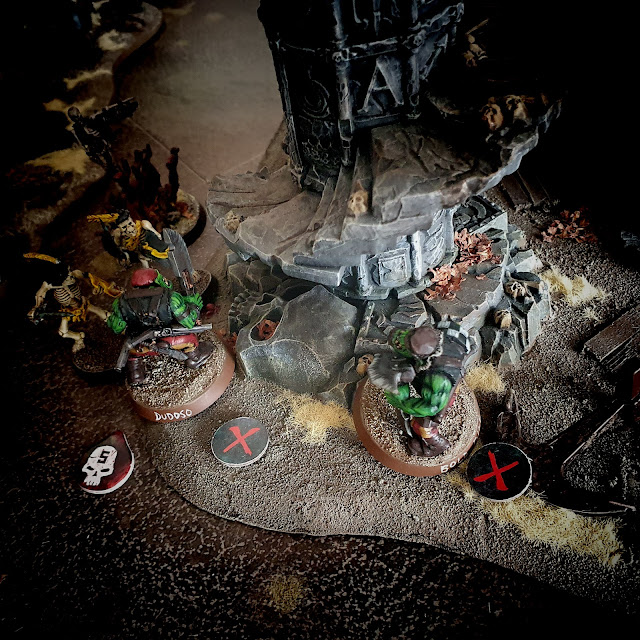 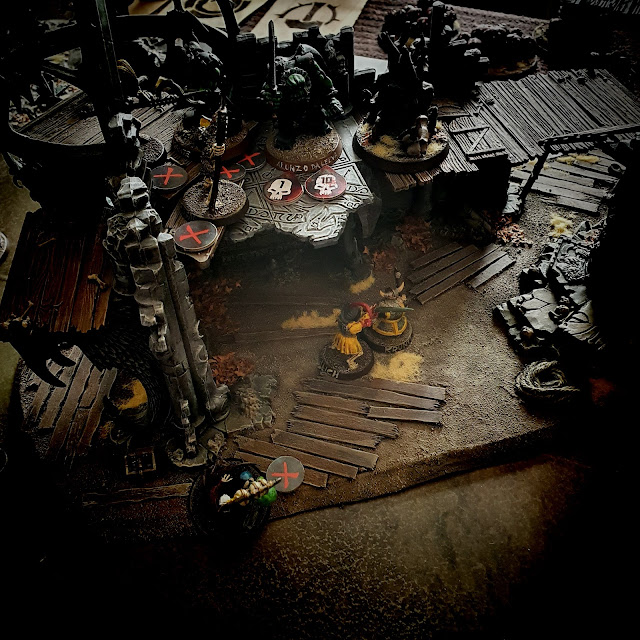 Kapitan da Leeva smashed another skeleton to component bones and they clattered down off the deck to the ground below. 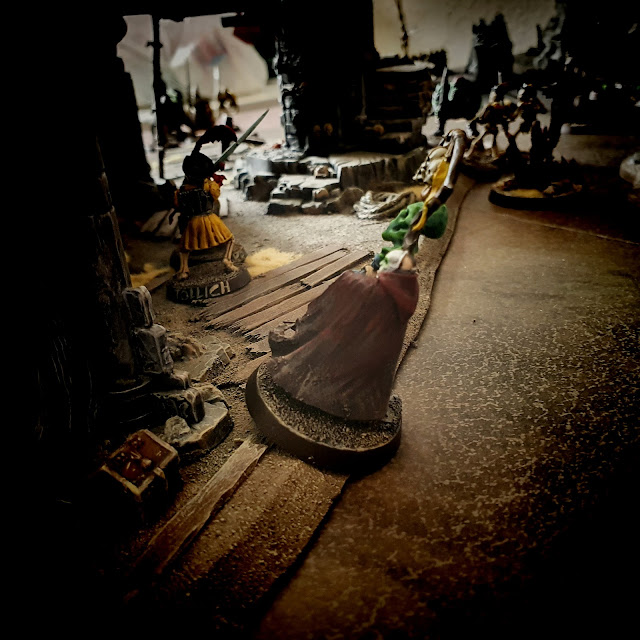 Kalyustar the Soulchemist stepped out of the shadows and the bones reassembled themselves. 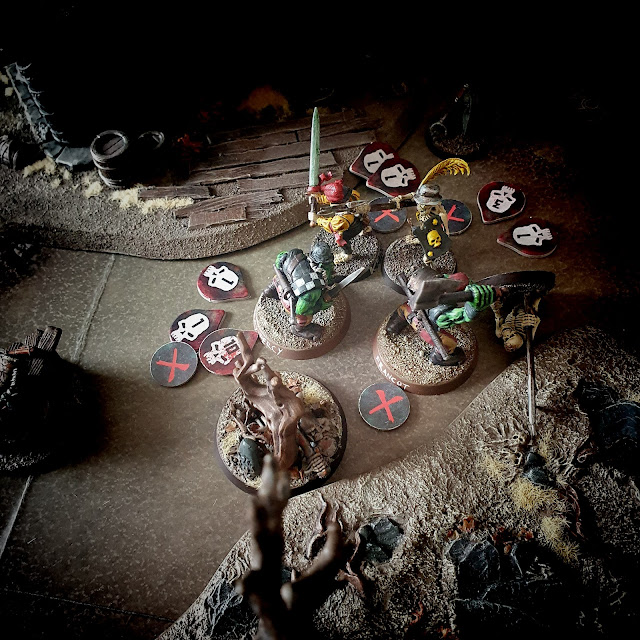 Percy Percy and Francot were set-upon by a skeleton champion but they managed to hold the line. 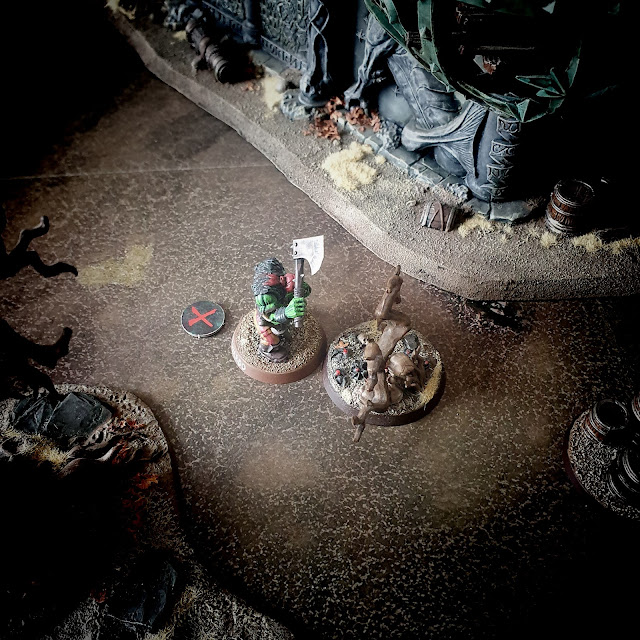 Awkwardo didn't seem to notice the fighting, so preoccupied with spiders was he. 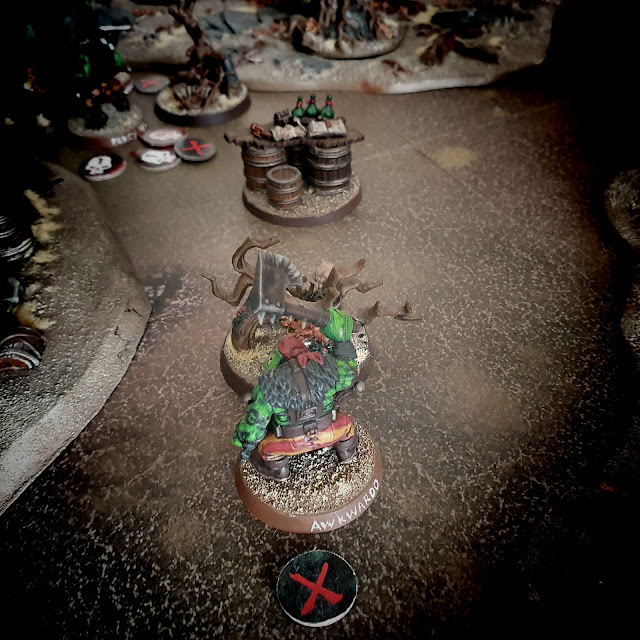 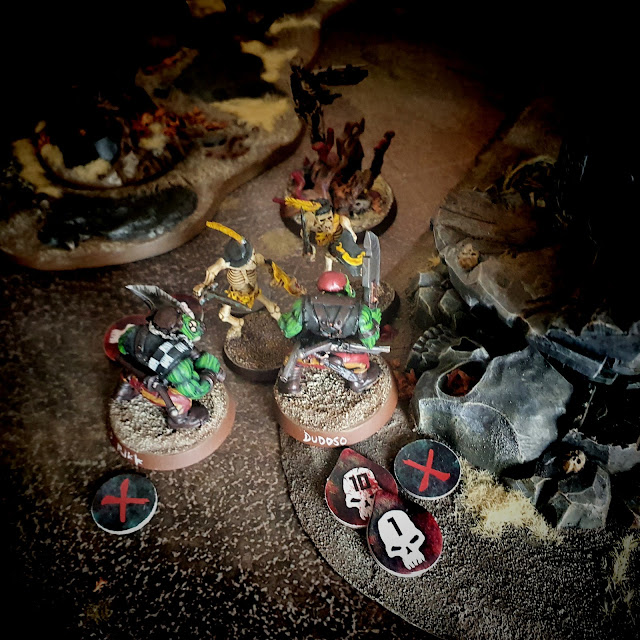 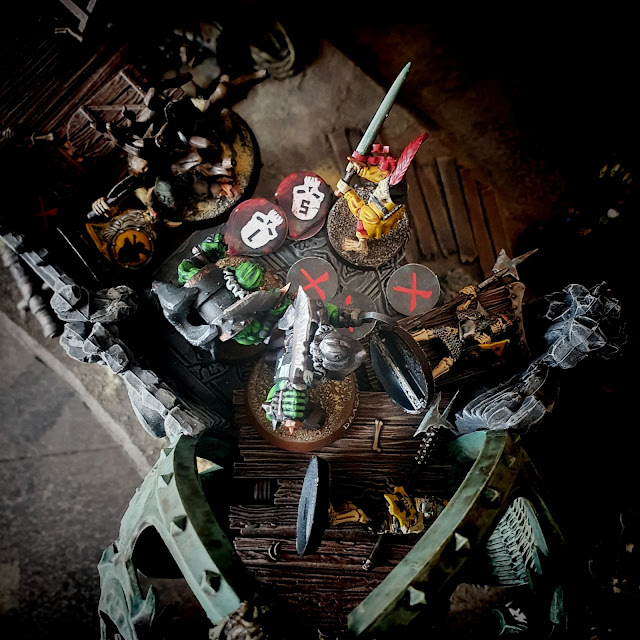 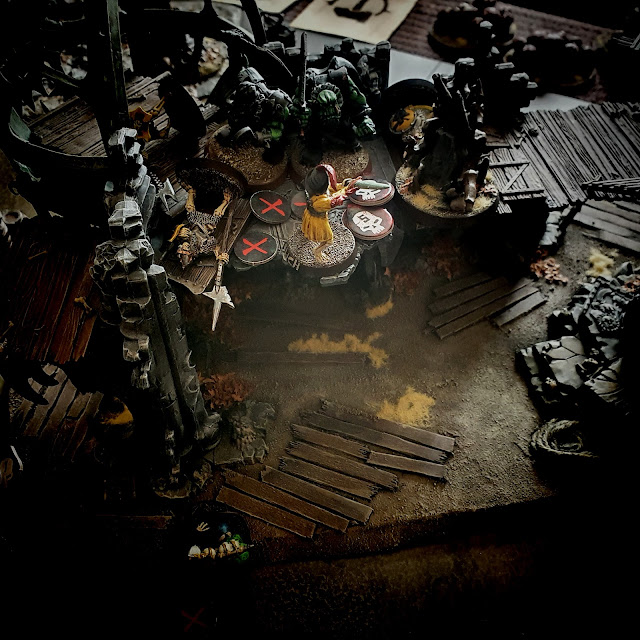 The Rotmoons seemed like they had the upper hand. They were pushing back against the undead assault hard. Skeleton after skeleton fell to their kutlasses and heavy pistols. 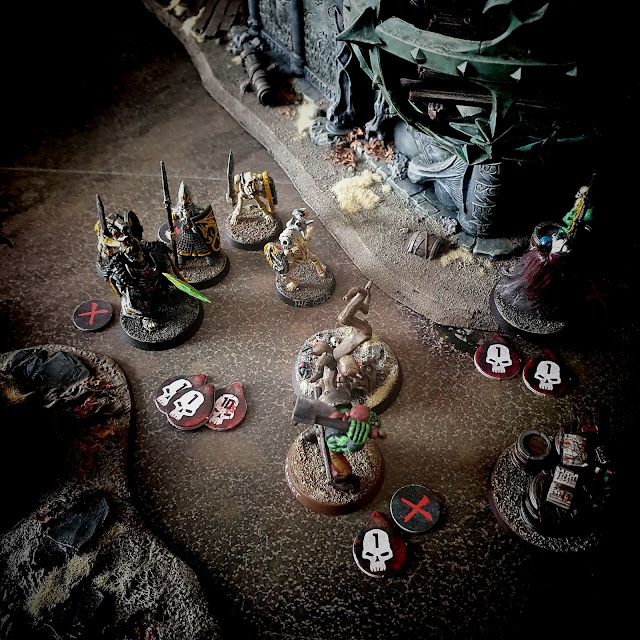 Then a Wight and another large group of Deathrattle appeared from the forests! They beared-down on Awkwardo and oustedthe ungainly pirate from his post at the spidery sappling. 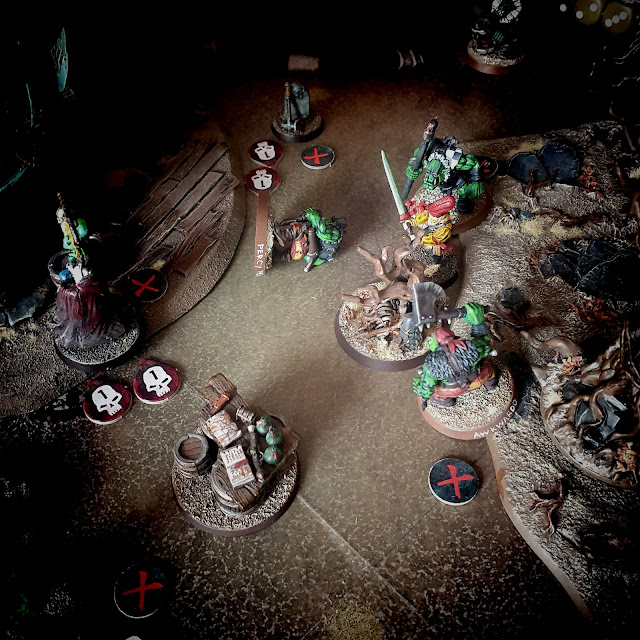 El Doctoro tried to assist, realising that the rear of the crew's position was entirely forgotten. 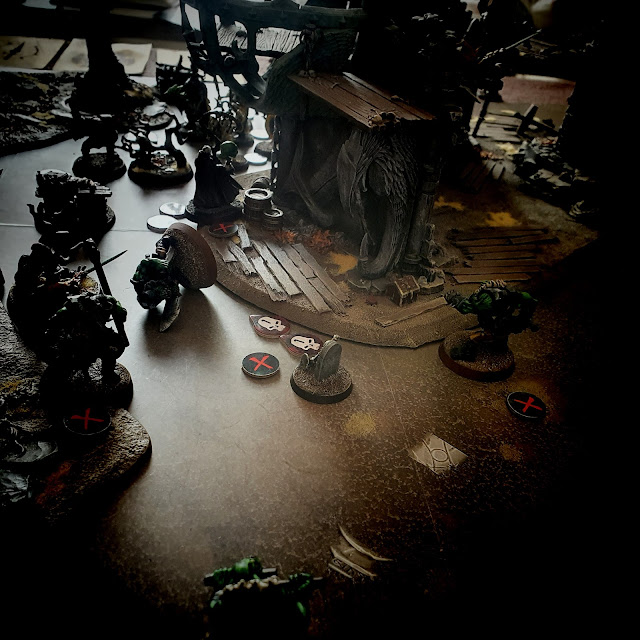 Sorcerous blasts flew back and forth across the forest clearing. More pirates were injured than undead. 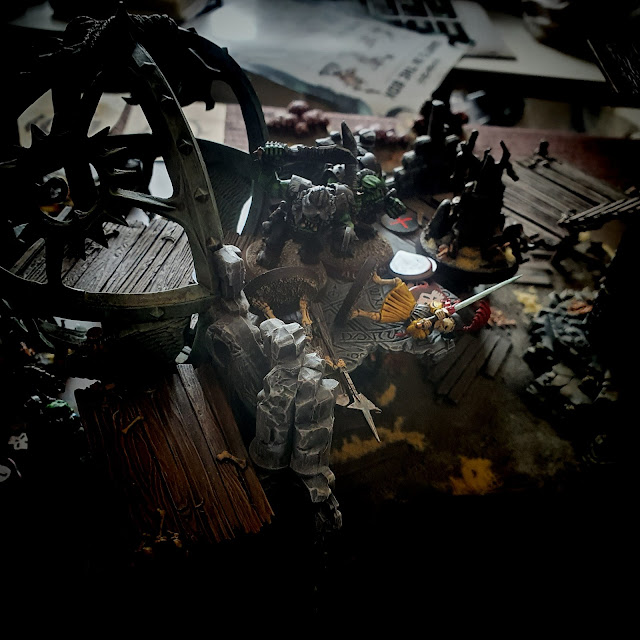 The Kapitan tried to extract himself from the front but more skeletons clambered up the ruins. 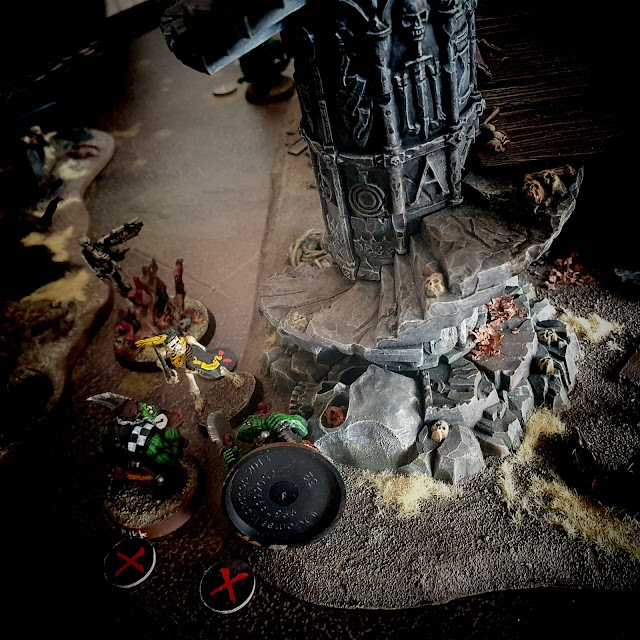 Dudoso fell, a grievous sword wound to the belly brought him down.
By the time the orruks realised that only one of the sapplings mattered to the Soulchemist, the necromancer and his minions had charged off into the forests and disappeared.  Awkwardo swore they were following the swarm of hideous spiders, but no one believed him. The Rotmoons were left perplexed by what had just happened.
+++
Viktor’s tactics were flawless in this game. He formulated a plan when he secretly selected the one objective that mattered, knowing his numerous Shield Group would be deployed at the start of the final turn of the game. He saved all his Wild Dice for his master-stroke too, so he could be certain of having a couple of key abilities available.
Even if I had seen it coming I don't know if I could have countered it, unless I had thrown everything at one objective and ignored the others. It was a cunning and brutal plan. Love it!
+++
Viktor’s version of this adventure in here.
Posted by WarbossKurgan (Saul) at 07:14