Kaptain Battendown strolled along the wharf passed moored sky-ships on one side, piled up crates and barrels, and busy harbour workers on the other. Fog rolled over the tree-tops, just below the wooden walkway. The buildings behind the wharf that were once painted in bright colours were now shabby and weather-worn. At the far end of the wharf he could see his ship, the Swordfysh, a hulking mass of heavy timbers and metal plates with a prow built for ramming.
The crew spotted him approaching and gathered at the side of the ship.
"Roight lads. We are going ashore for a spell." said Battendown, trying to sound optimistic.
The Swordfyshes looked each other and shuffled their feet uncomfortably. One of them elbowed their neighbour who spoke up.
"This place is a dump Kap'n. Ain't there somewhere else we can go than Gallowmire?" complained Barnacle Nog.
Battendown sighed, he knew he wasn't going to be able to convince them. "Yes, it's a dump. But we need to stay here a while. I got orders from the Adm'rul."
+++ 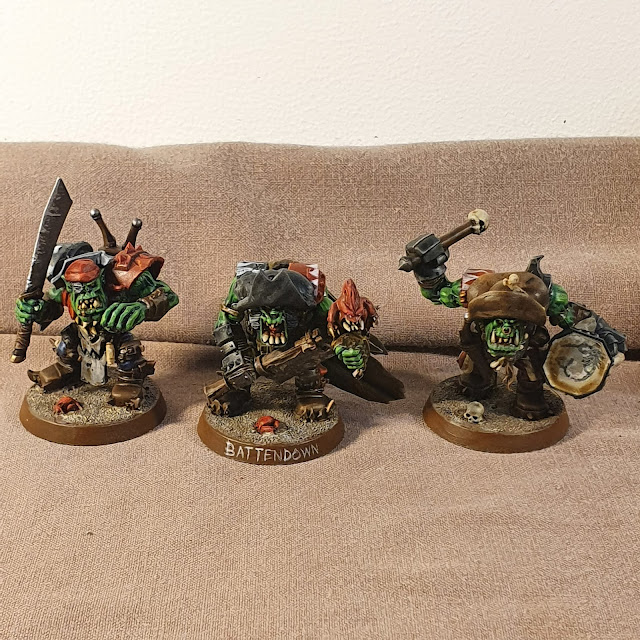 The Swordfyshes are sky-ship pirate Ironjawz Ardboyz from the Harrowmark. Kaptain Battendown is unusual among his kind, as he runs his ship with the cooperation of his crew, and doesn't dominate them by threats of violence (that often). Most of the crew agree with his decisions, most of the time! Barnacle Nog is a bit of a moaner, and often the voice of the crew in any disagreements. Bilgewater and Rukbadruk both have a history of mutiny, so none of the others pay much attention to anything either of them say.
As a whole they prefer to charge forward and get stuck in as quickly as possible, and they sail the Swordfysh with the same attitude. To the extent that they have reinforced the ship's prow with a massive metal ram which they like to use to plough the Swordfysh into the side of a victims' ships, then leap over the gunwales to board and fight on the enemy's deck. They have also looted some Kharadron endrins which they only use to get a burst of extra speed during ramming manoeuvres.
+++
The Swordfyshes are mostly made from 40k Ork Nobz, the old WHFB plastic Greenskinz Orc Boss and 40k Flash Gitz, with a few assorted ork/orc/orruk bits-box parts added. Some additional greenstuff work on things like hats, bandanas, eye patches, beards, etc.
I also gave them a selection of nautical gubbins like pistols, charts, compasses, powder flasks, ropes, lanterns and telescopes. Their weapons are mostly Ogor & Orruk Brute swords with one or two Boar Boy hook-hands. 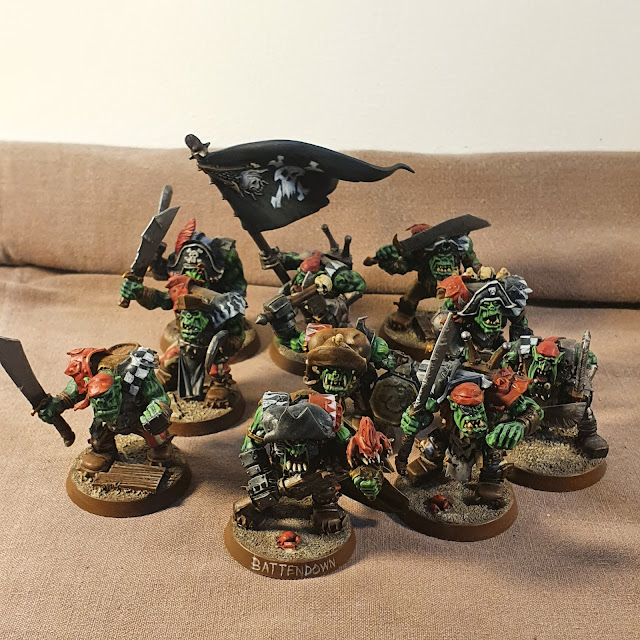 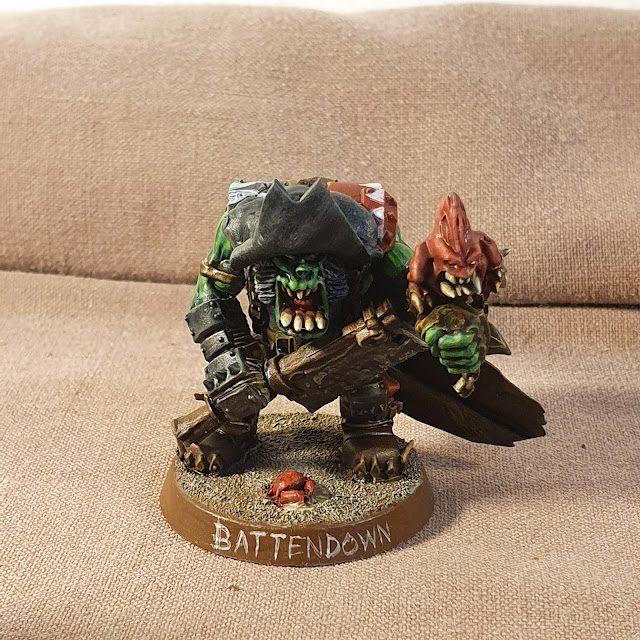 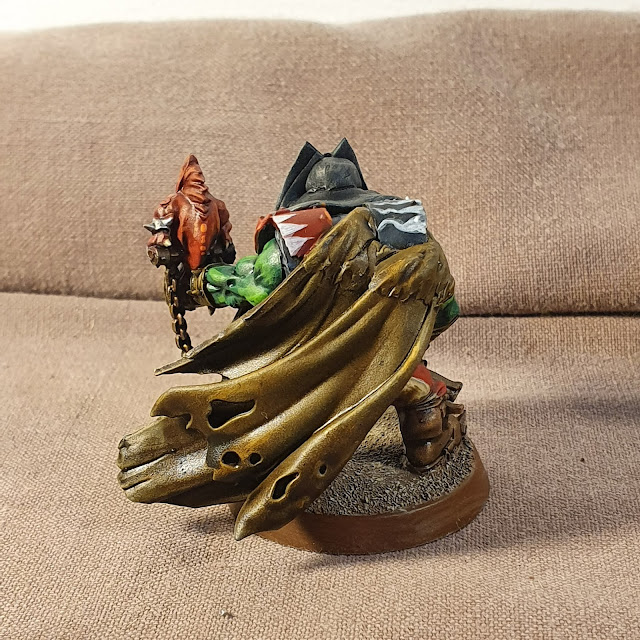 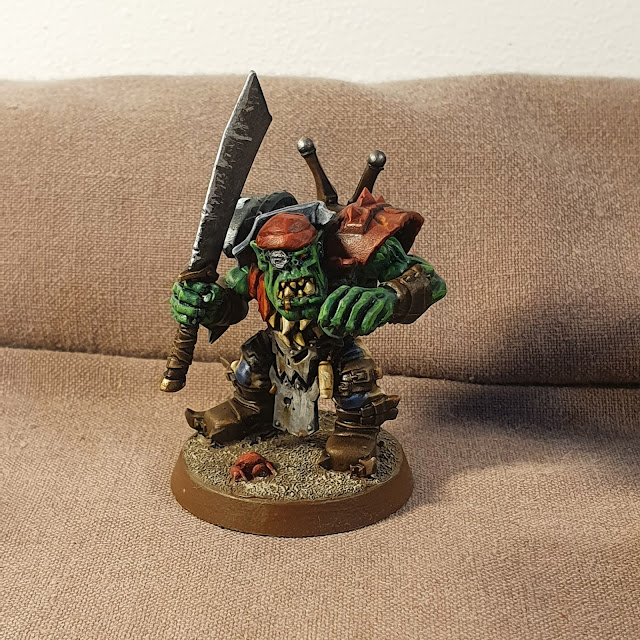 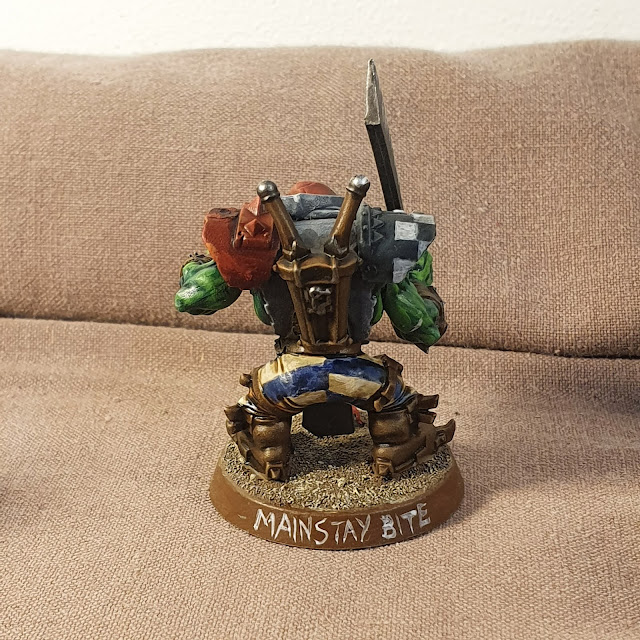 And Mr Flea the drummer: 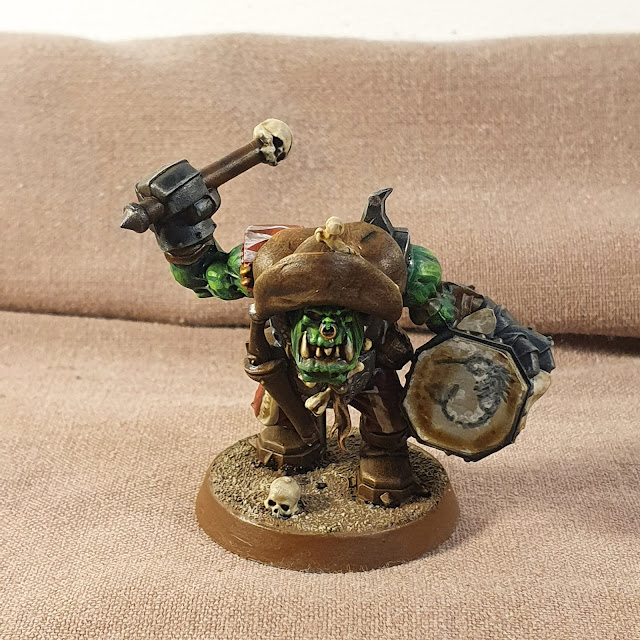 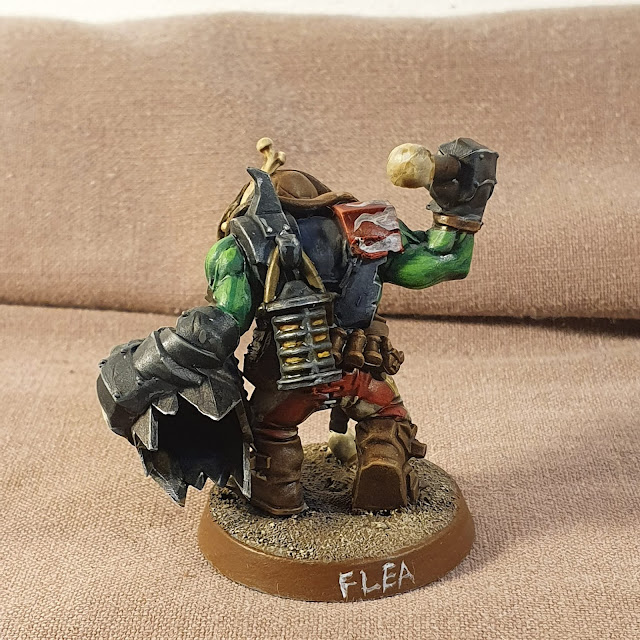 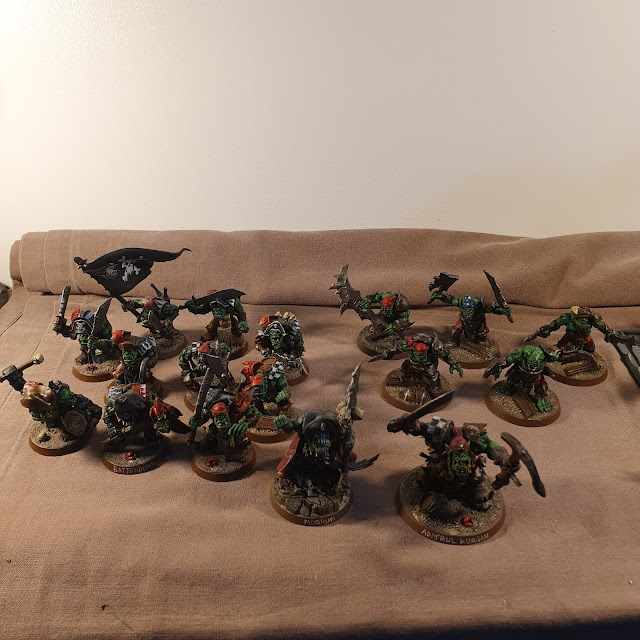 With the Hogwashas (5 Brutes), the Adm'rul (Megaboss) and Kaptain Mogrum (Weirdnob Shaman) I now have a 600 point Ironjawz Path to Glory army!
Posted by WarbossKurgan (Saul) at 16:57