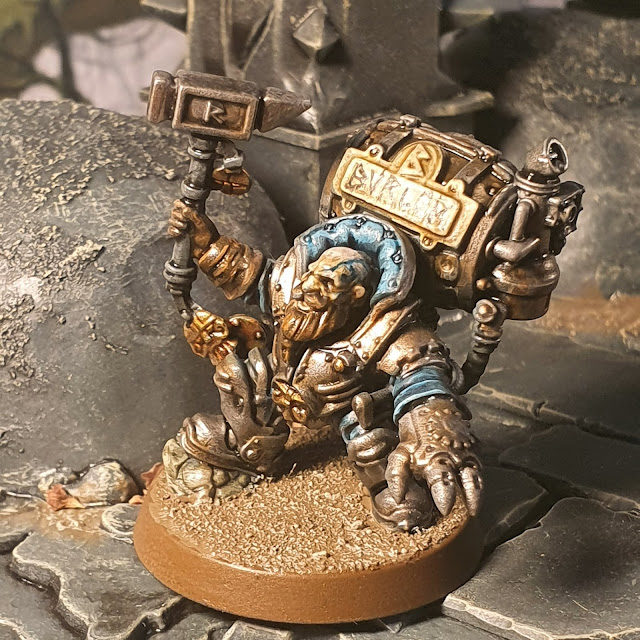 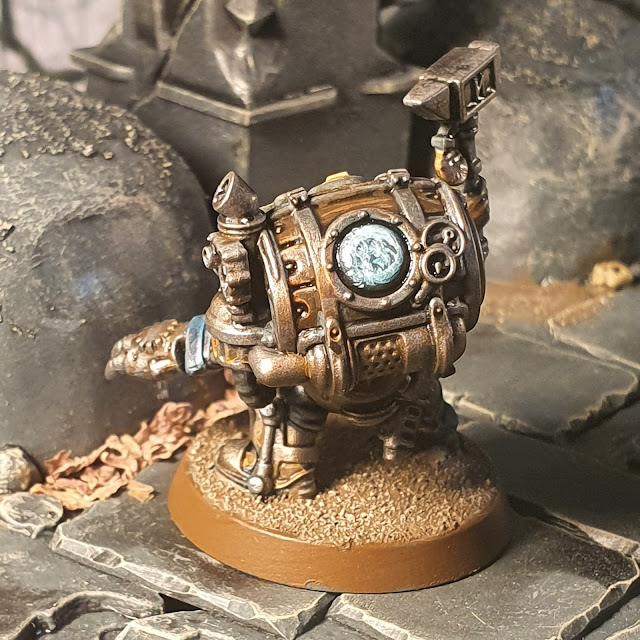 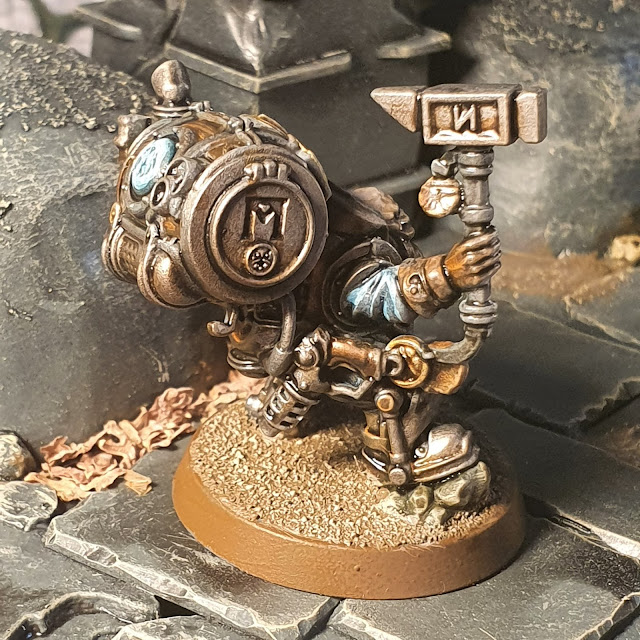 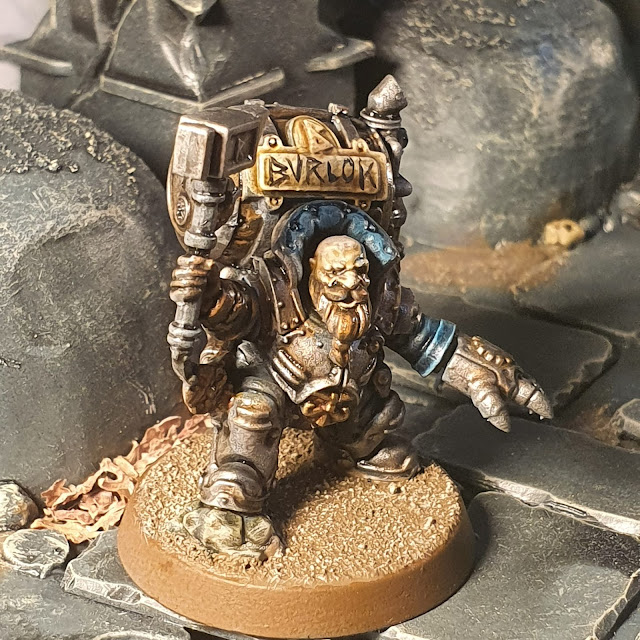 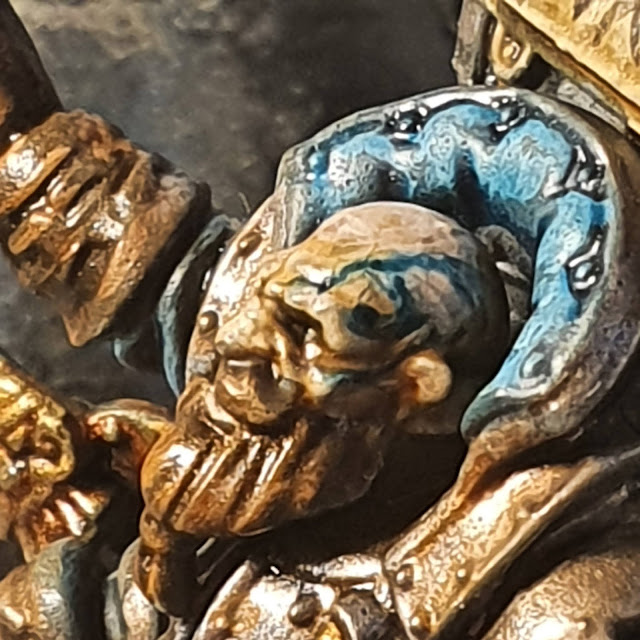 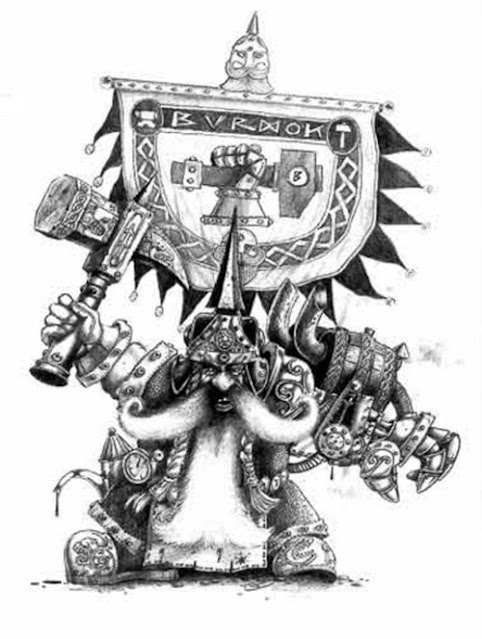 As soon as I saw the 2020 Christmas model from GW I started planning an AoS version of Burlok Damminson. I have never really been "into" Dwarfs and while I like the idea of the Kharadron Overlords a lot, I wasn't keen on any of the character models, so I didn't consider them as a force for me. But the new "Jakkob Bugmansson" is such a great model I couldn't resist it.
Back in the "Age of Lead" I had the start of a Dwarf force that never really got any further than purchasing three blister packs and gluing them into their bases: it was Burlok Damminson and 6 Thunderers.
So now I'm going to reproduce them as a Kharadron Warcry warband. I used a Datasmith powerfist (from the Kastalan Robots kit) for Burlok's BIONIC left arm (the barrel is the aether endrin powering it) and a very old Dwarf Warrior's hammer instead of his pint. 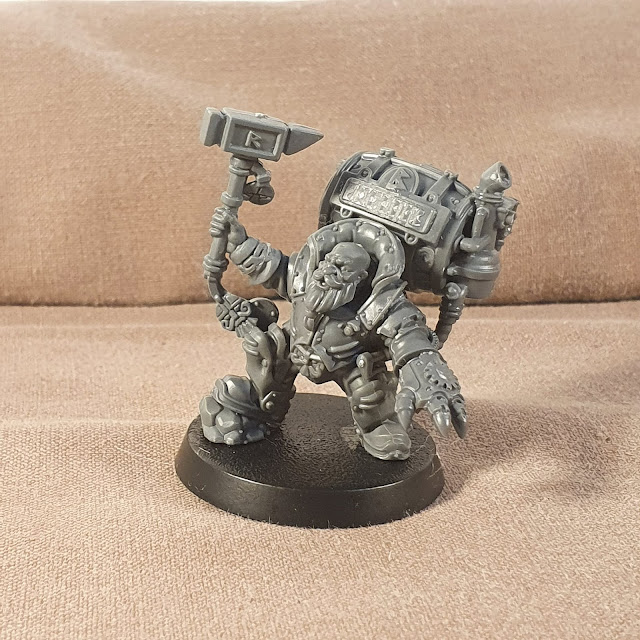 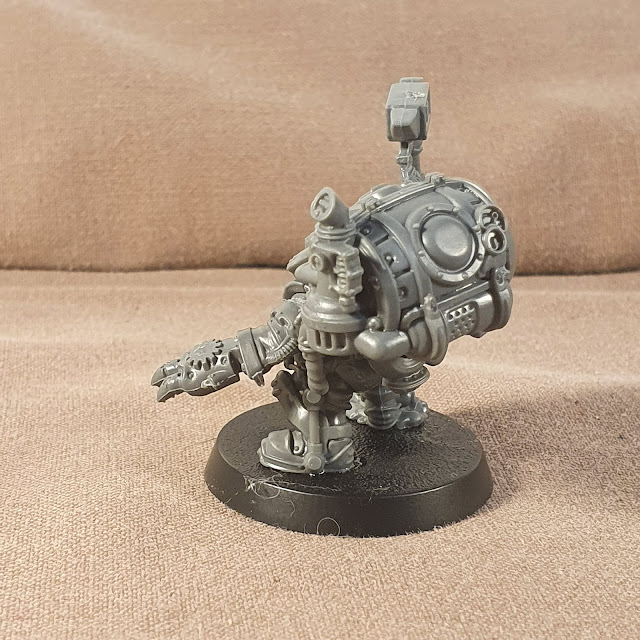 An Arkanaut Captain, 5 Thunderers with Aethershot Rifles, and an Endrinrigger with an Aethermatic Volley Gun is just under 1000 points in Warcry.
I used Space Wolf heads instead of the masked helmets. The neck joints needed more work than I'd hoped but I think they match the look of the helmetless Kharadron in the Battletome art quite nicely. I have also heard a lot of bad reports about the flying stands, so I have improvised something from my bits box instead - I think it's from a Coven Throne kit? 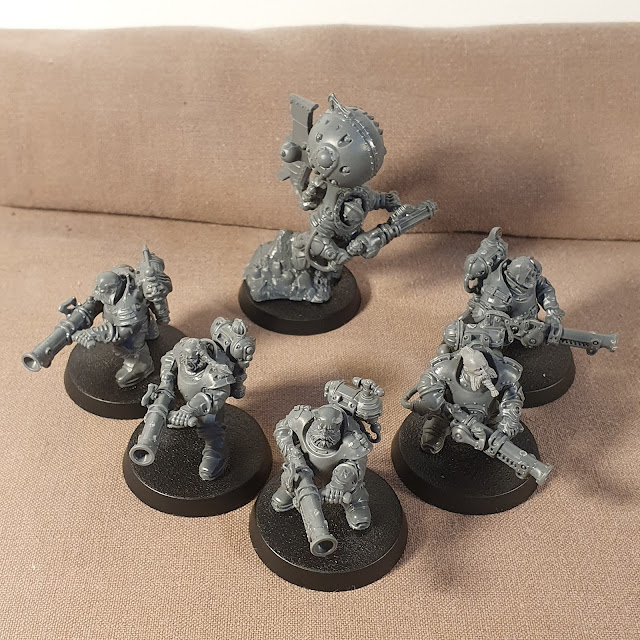 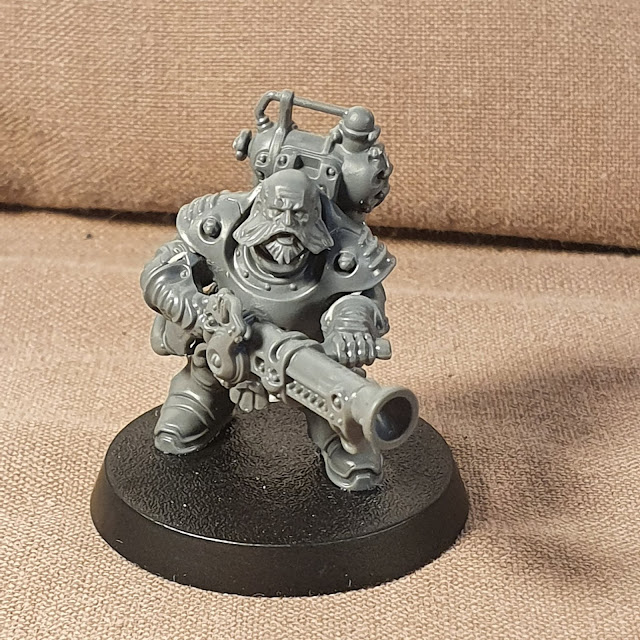 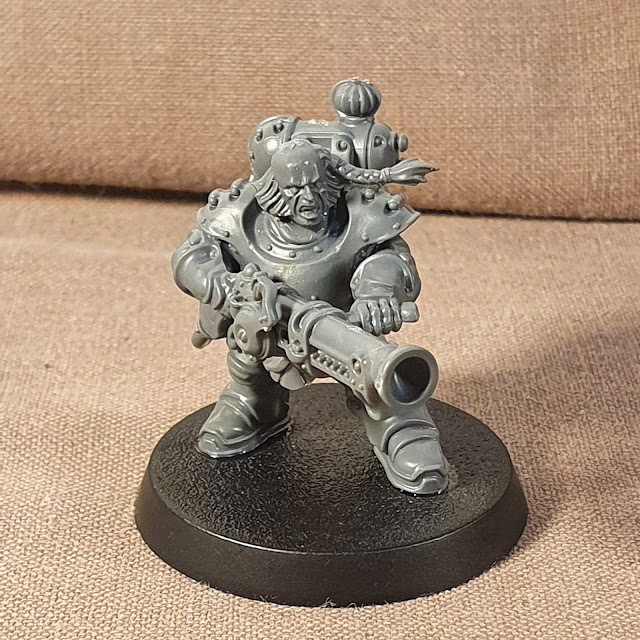 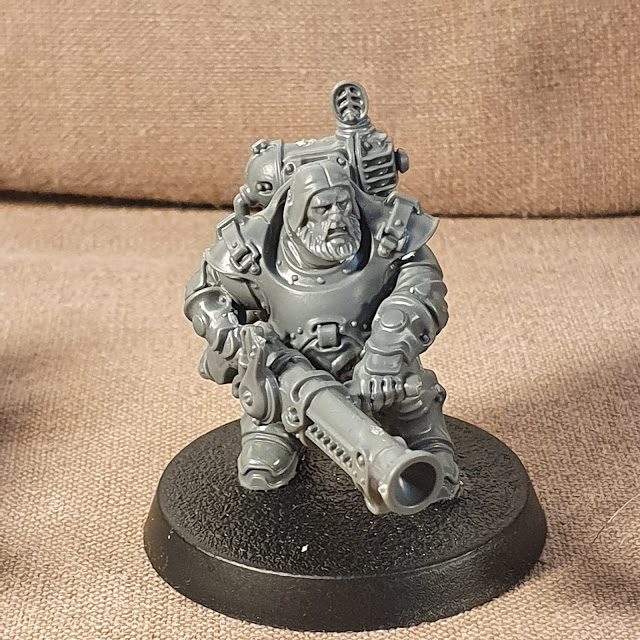 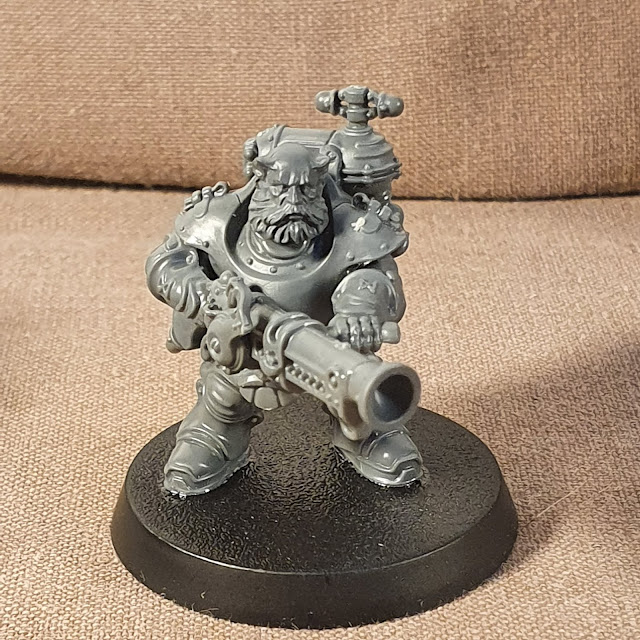 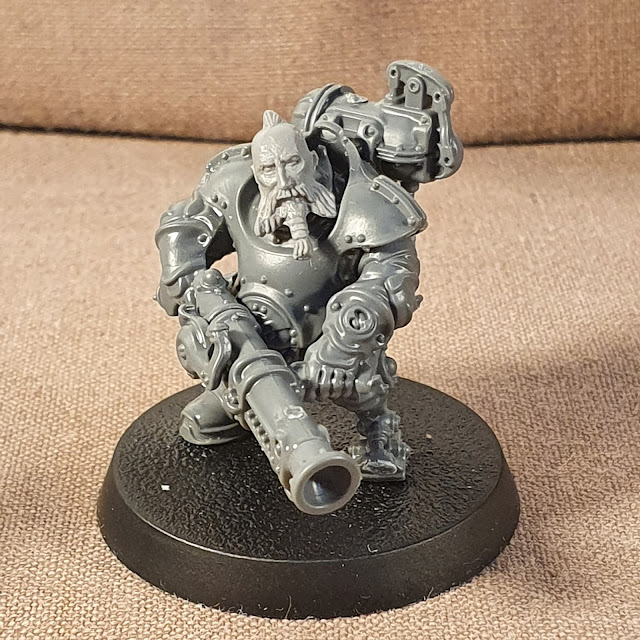 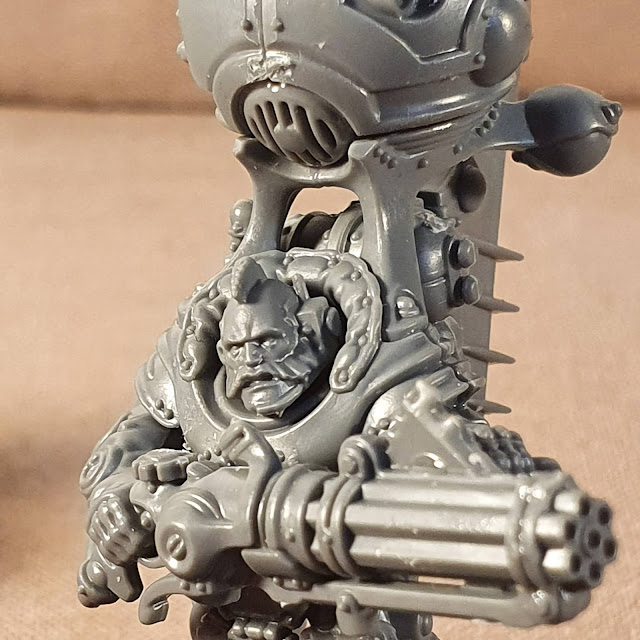 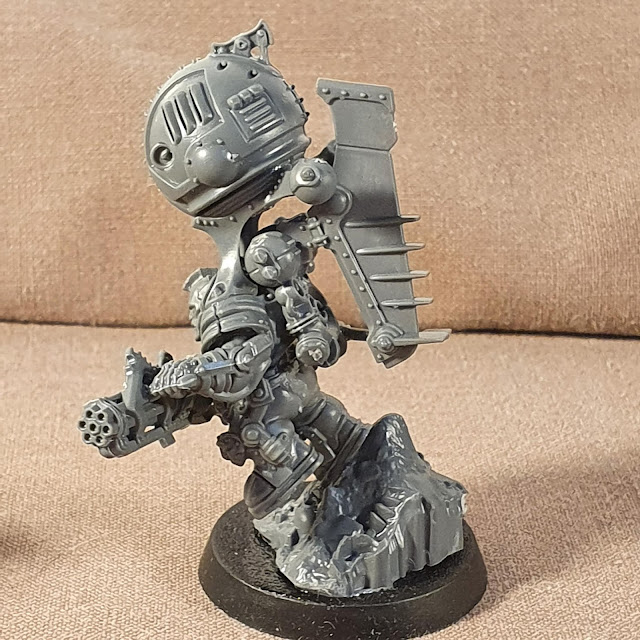 Email ThisBlogThis!Share to TwitterShare to FacebookShare to Pinterest
Labels: Age of Sigmar, Dark Age of Sigmar, Kharadron, Shyish, SkyPirates, The Harrowmark, The Realm of Death, Warhammer