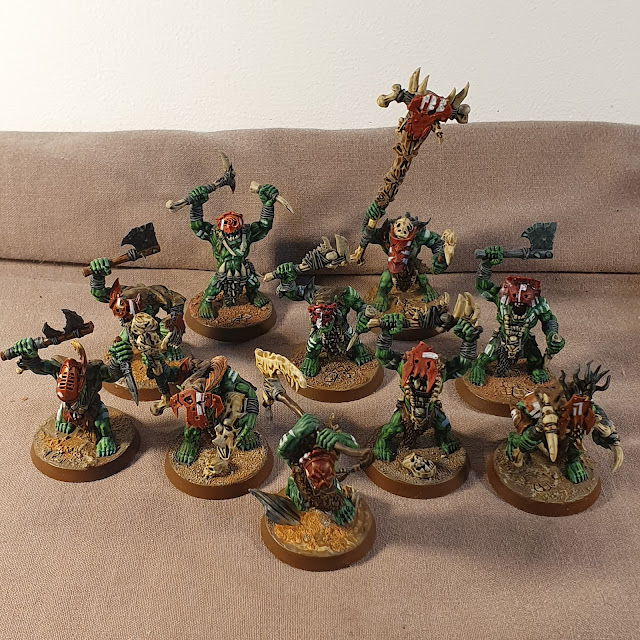 I started building the Badfangs for AoS Skirmish originally way back in 2018, I worked on them sporadically and only just finished enough for a game. Then I expanded them for Warcry in 2020 and used them as my warband for Animosity II.
This approach meant I didn't have to pick one or two of their options and make all 20 of them the same way - it was really liberating and meant I had a fun skirmishing warband with a lot of variety. I converted a couple into Wardokks and made a single Big Stabber team. But this meant the Badfangs could only be used in Warcry as the number of each type of Bonesplitterz were too small for AoS.
I bought another box of Bonesplitterz orruks this week, to add to the small groups of models to expand them into AoS size units. I don't know how much I will actually play AoS as Warcry fills up most of my gaming plans, but I thought it would be good to have the option!
I had 8 Morboys completed for Warcry, including a Morboy Boss (the orruk with a great-axe from Hedkrakka's Madmob) and a Morboy with Bone Totem, so they just needed two extras to bring the unit to minimum size: A Morboy and a Morboy Skull Thumper: 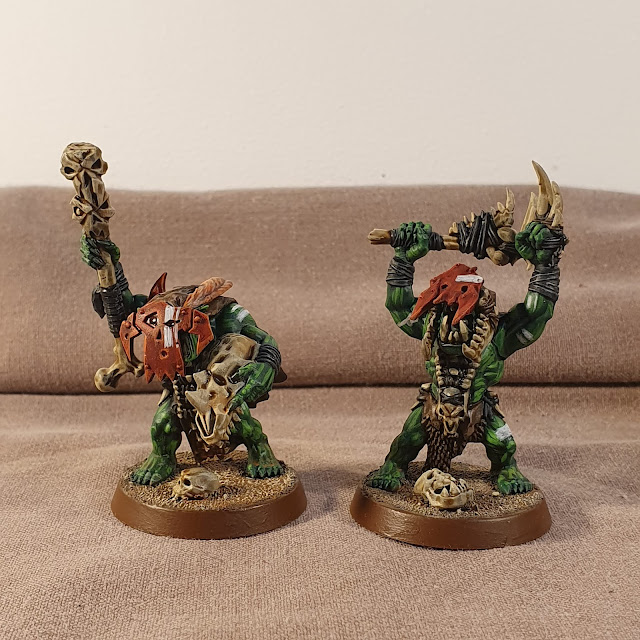 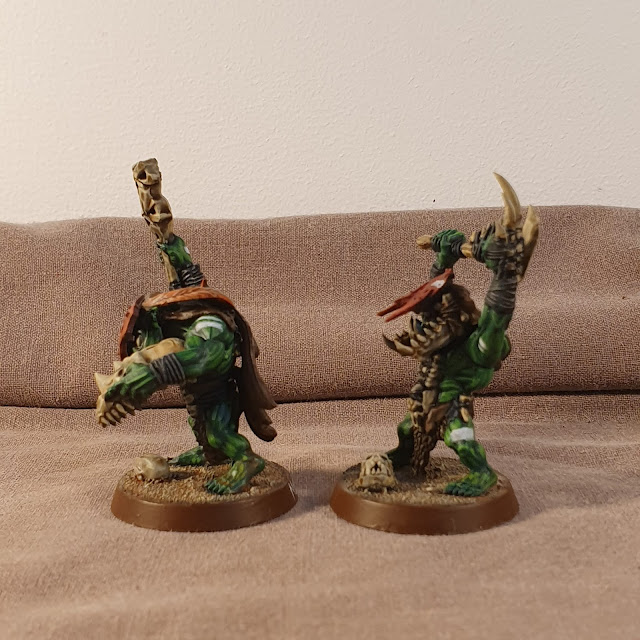 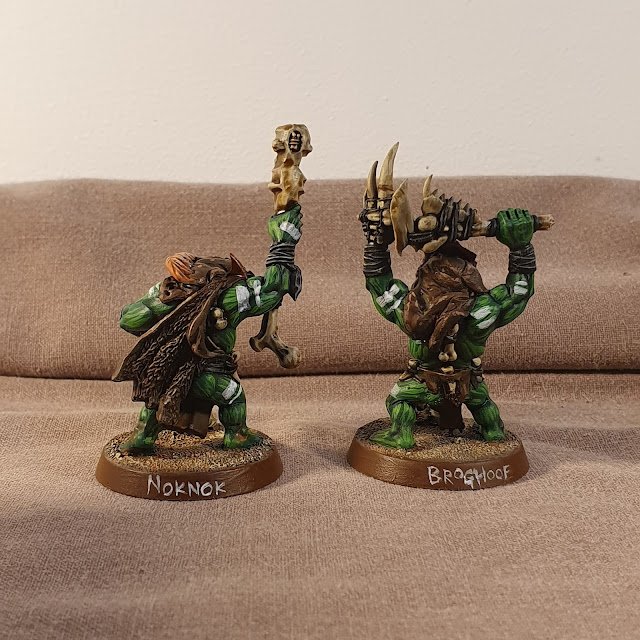 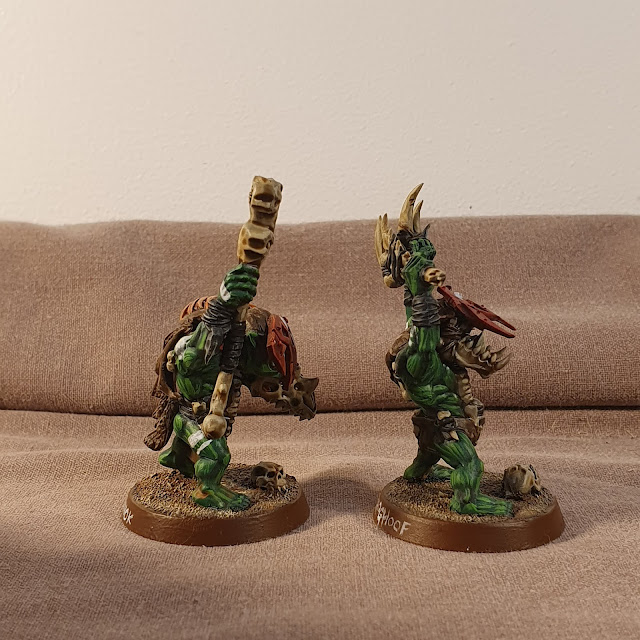 I had 7 Arrowboys in my warband already, including an Boss (the Arrowboy from Hedkrakka's Madmob), so they need three extras - a Skull Thumper, one with a Bone Totem and one more regular Arrowboy.
I have completed the Skull Thumper, with a bow and quiver on his back, and started building the Bone Totem and the last Arrowboy. I have also built another Big Stabber team, as they are fielded in pairs in AoS. 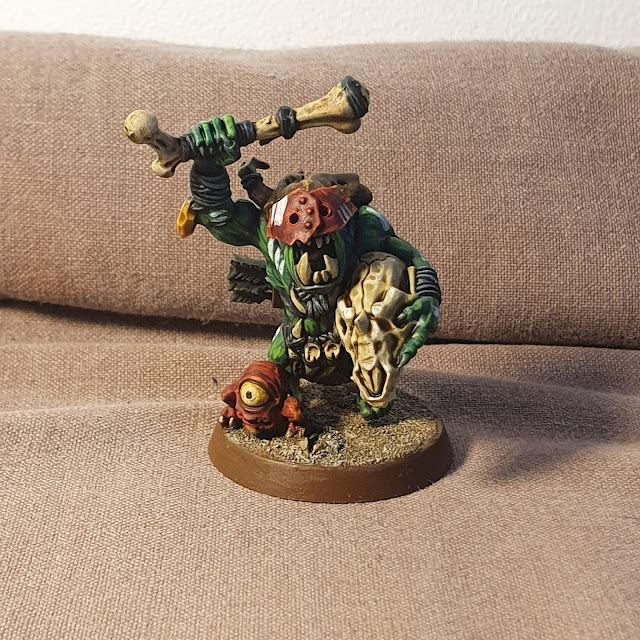 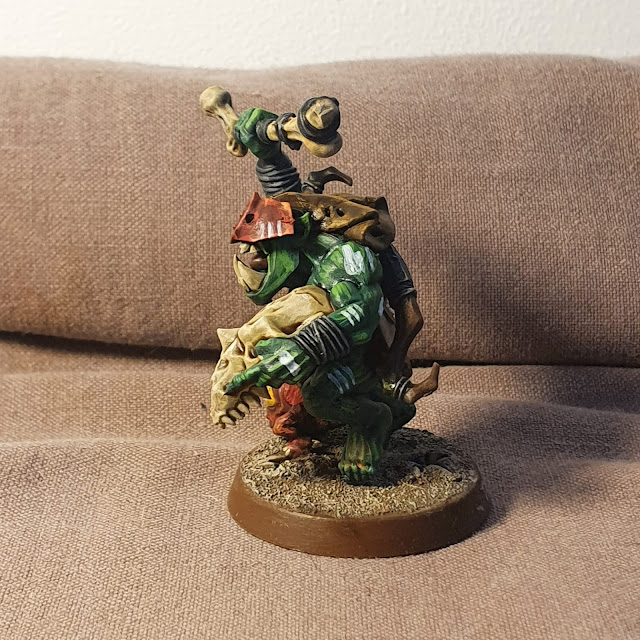 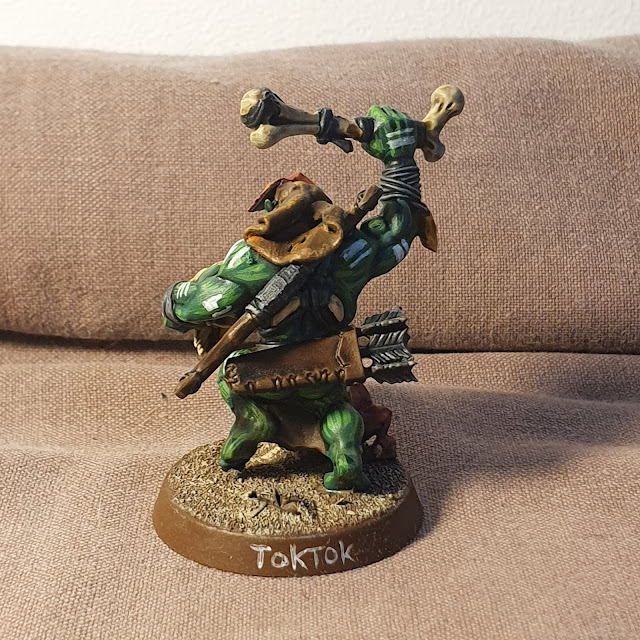 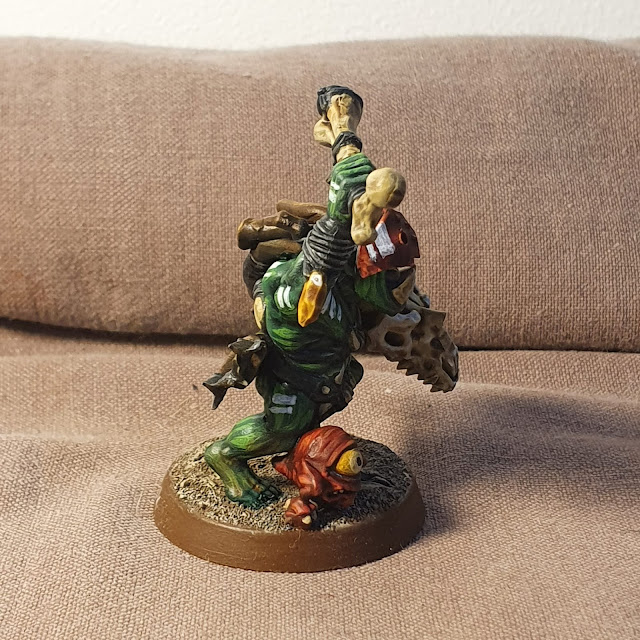 I gave the Skull Thumper a squiggy friend (a spotter-squig from the Ork Flash Gitz kit with some techie bits scraped off) to add a little character. I also had a first attempt at painting one of his trinkets as a chunk of amber.
I'll get photos of the other two Arrowboys and the Big Stabber team as soon as I have done their greenstuff cowls.
(Edit 2021-09-24)
As promised,  WIP photos of the next batch of Badfangs: 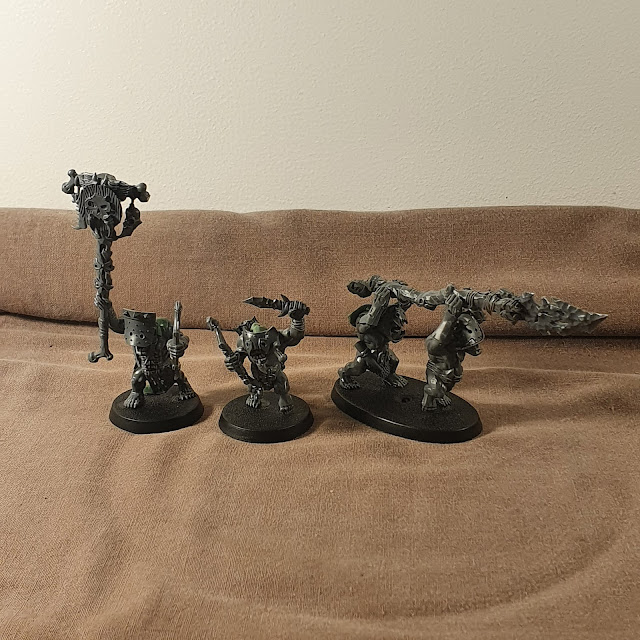 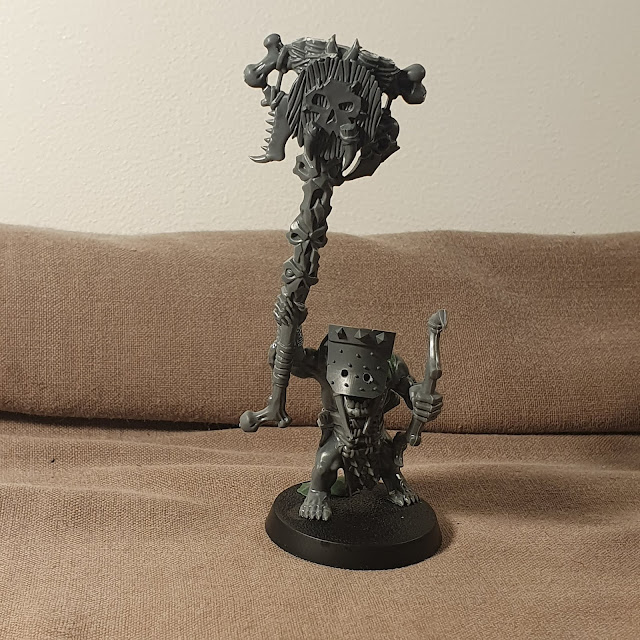 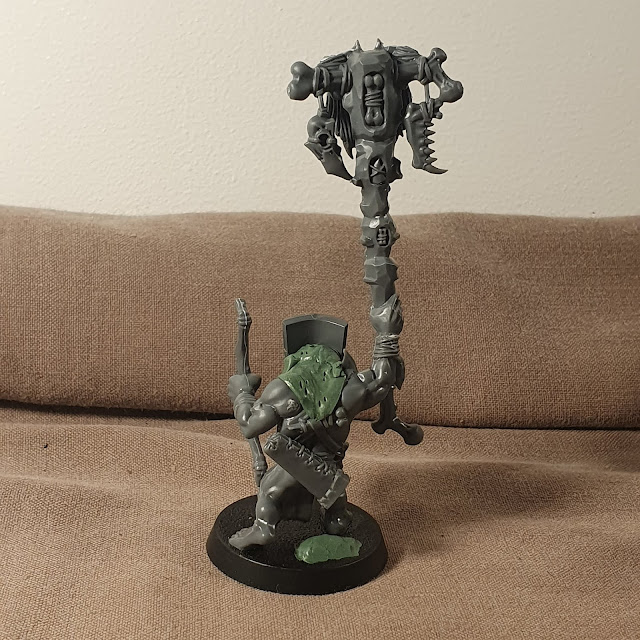 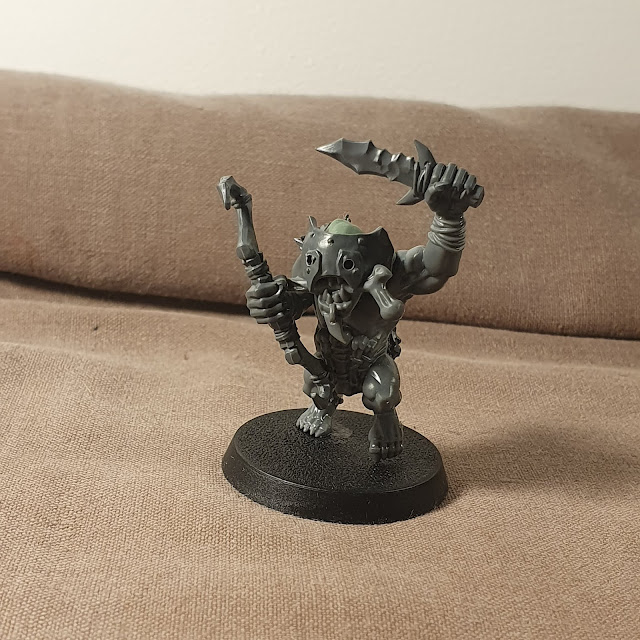 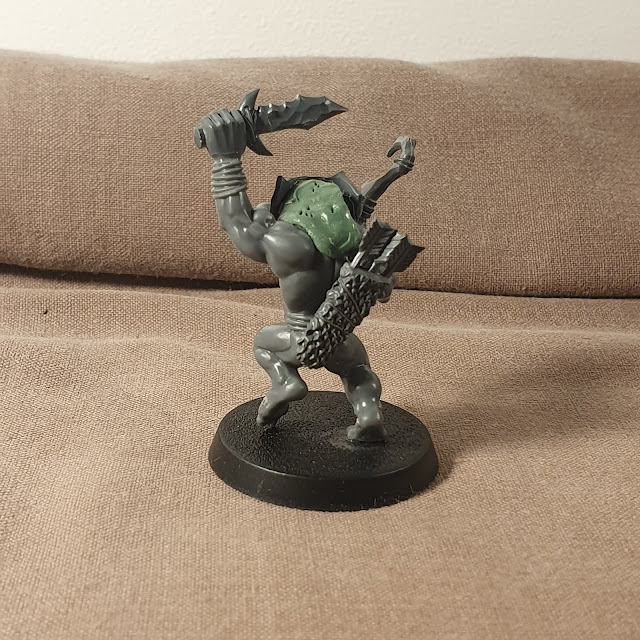 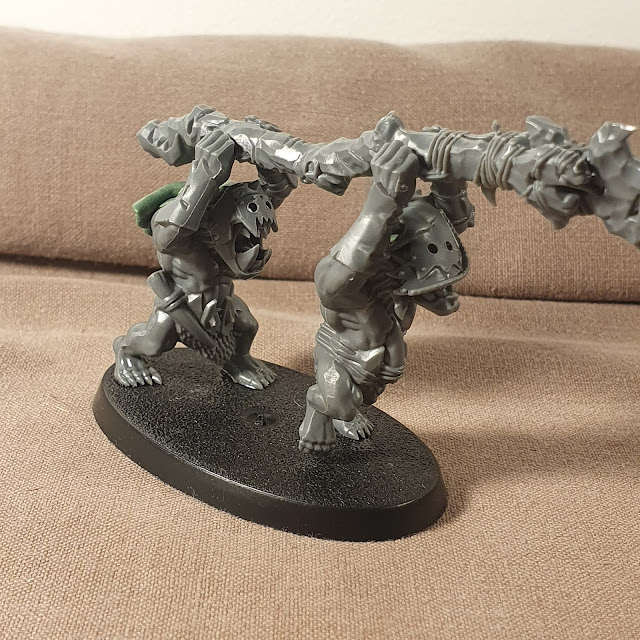 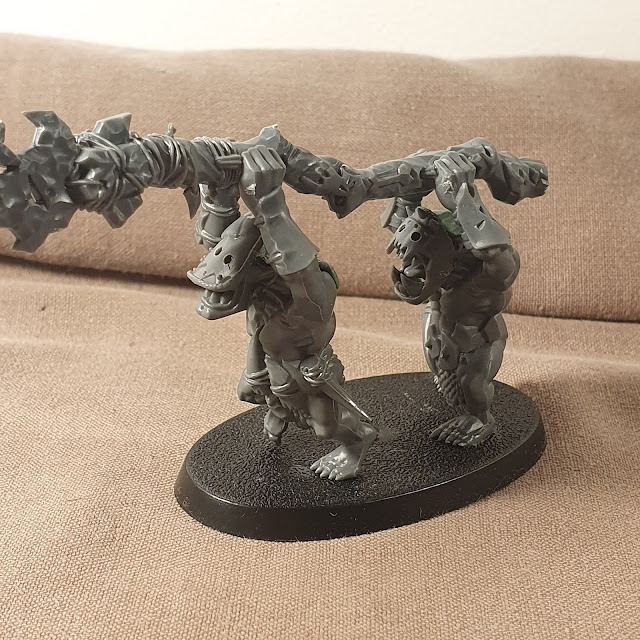 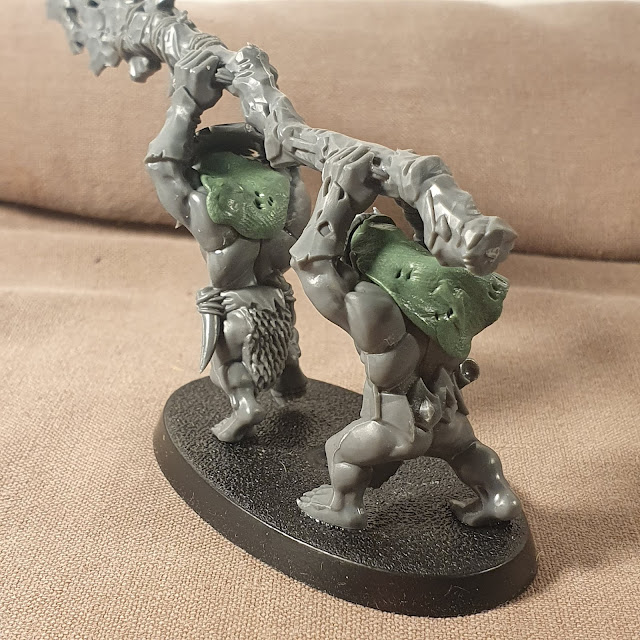 Email ThisBlogThis!Share to TwitterShare to FacebookShare to Pinterest
Labels: Age of Sigmar, Bonesplitterz, Ghur, Orruks, The Badfangs, The Realm of Beasts, Warcry, Warhammer