Throne of Skulls: Clash of Empires (Break Through)

Sinbag scratched his goatee beard as he peered through his spyglass. There wasn’t much of the city visible in the low light but there was definitely something moving through the ruins. He slowly panned across the vista of broken buildings. He stopped suddenly - there! Between the quays and the waterfront warehouses a small group of Duardin were moving something heavy on a wheeled carriage. More Duardin joined them from a side street and started heading towards his roof-top vantage point.

He turned to Weird Khaaan and said “What d’you fink? Shall we try the big smelly ladz out?”

“The keys that open doors are the keys that close them, and the keys in chains have nothing but the drama of tinkling.” said Khaaan.

“Right. Yeah, there’s that I suppose.” said Sinbag. “Let’s gather the crew and see if we can clear this lot out of our territory.”

Badbad and the Sea Trolls were herded forward by Sinbag, ahead of the other Chimeras, they lumbered along oblivious to the hammering they received from cannon, handgun and crossbow - one of the Trolls fell and the rest hardly noticed. 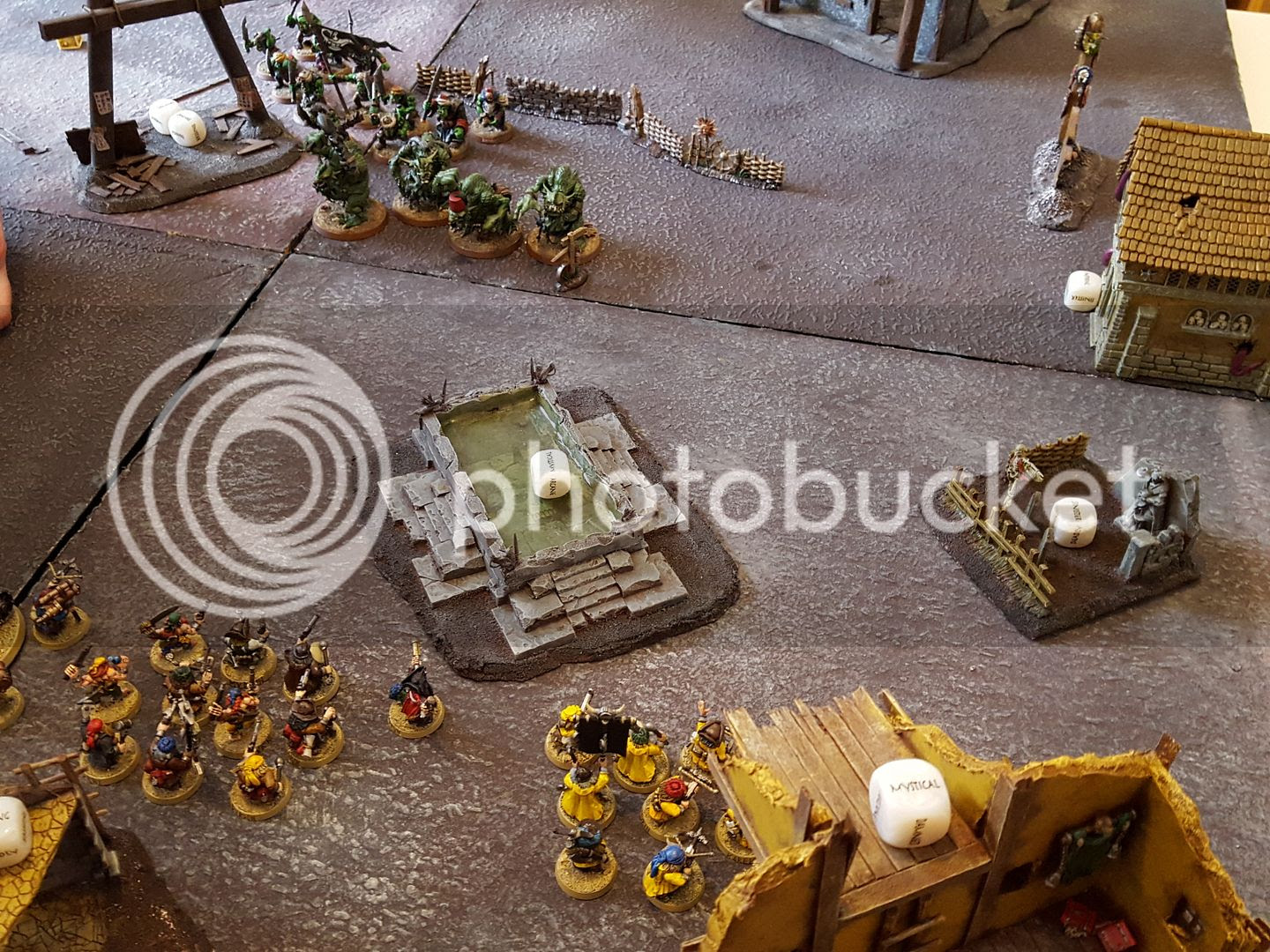 The Duardin Pirates advanced slowly, pouring a withering bombardment into the Corsairs’ lines. 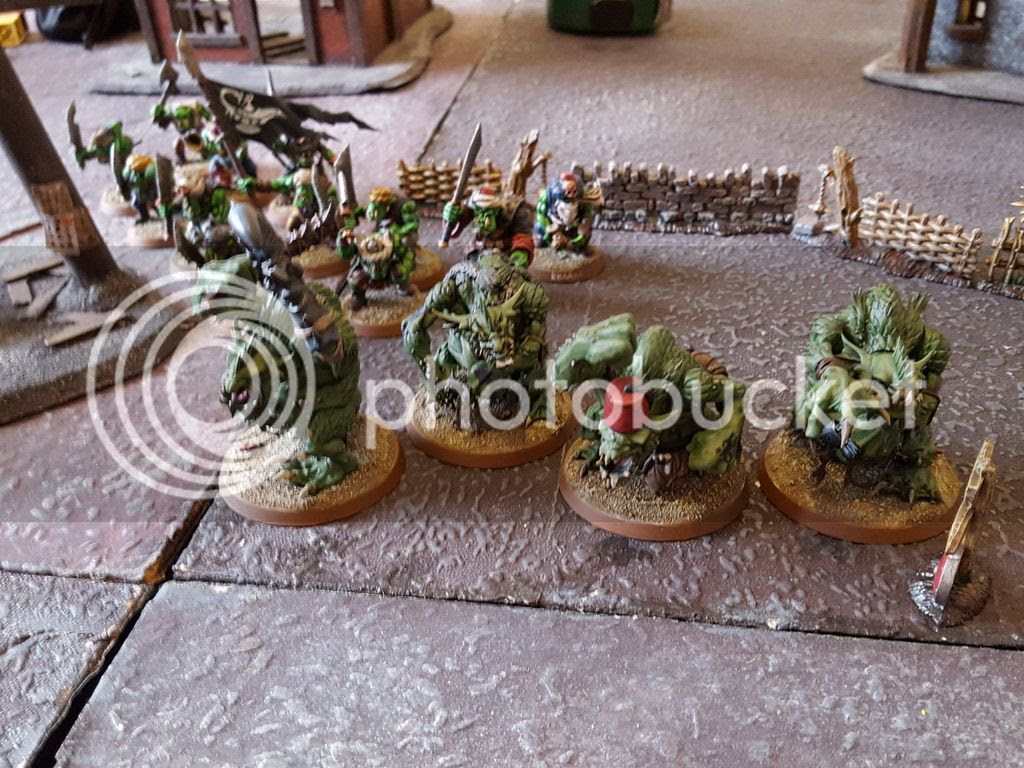 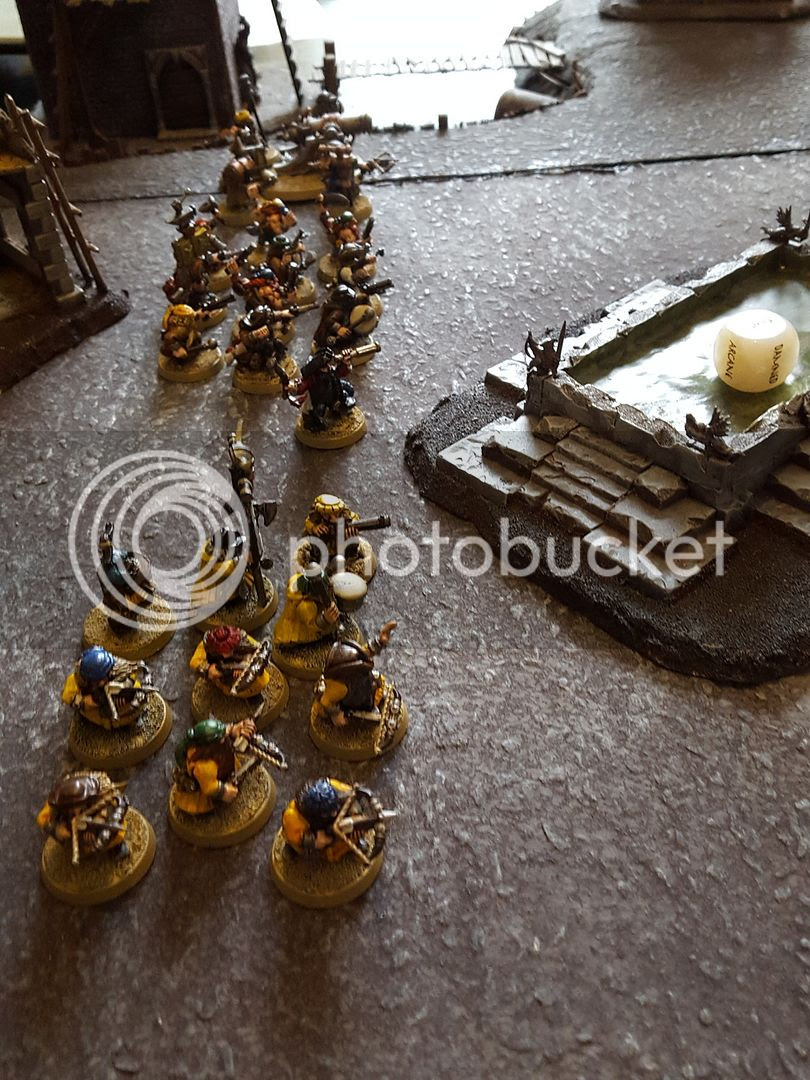 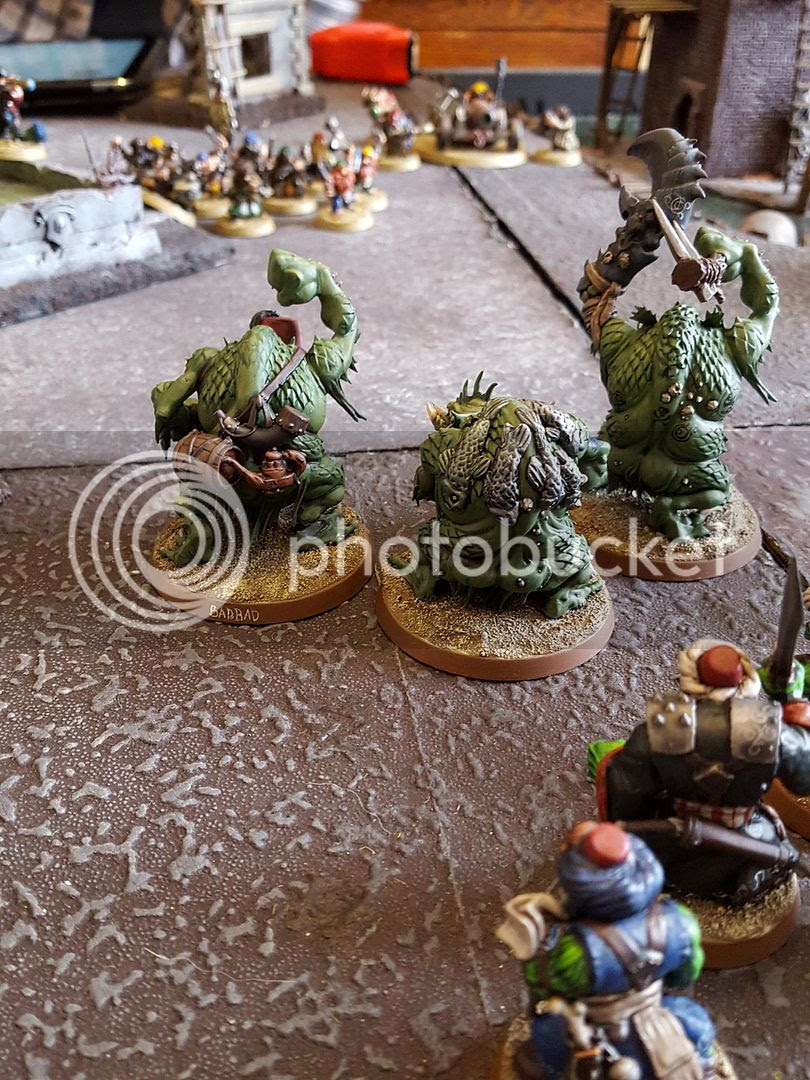 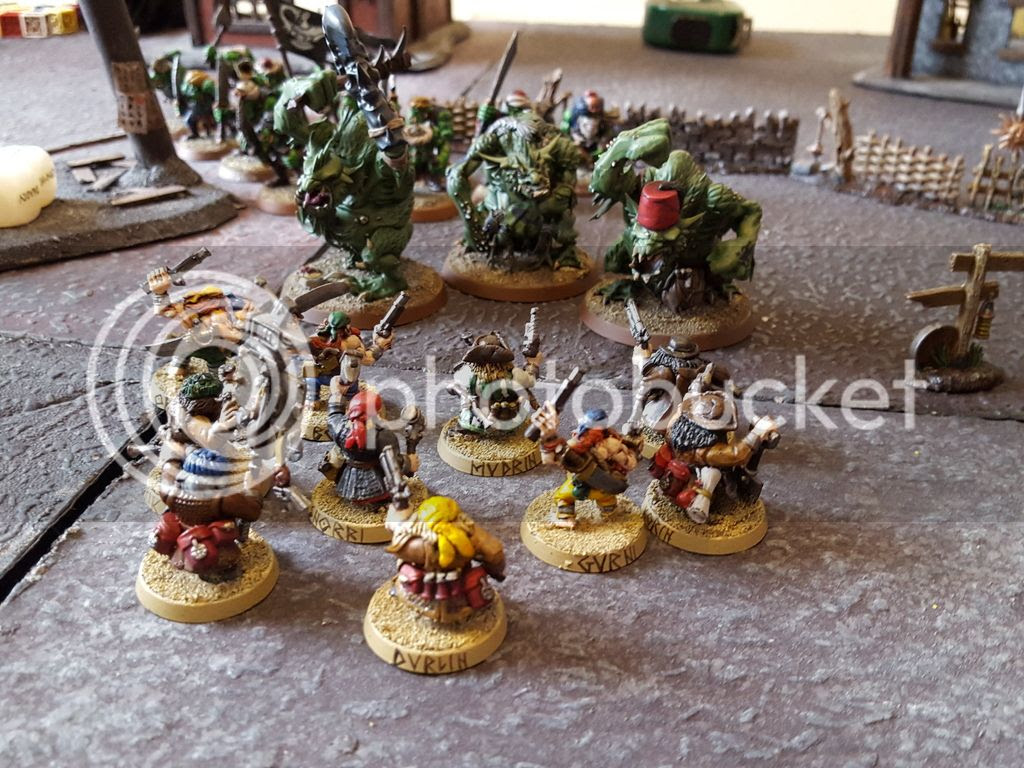 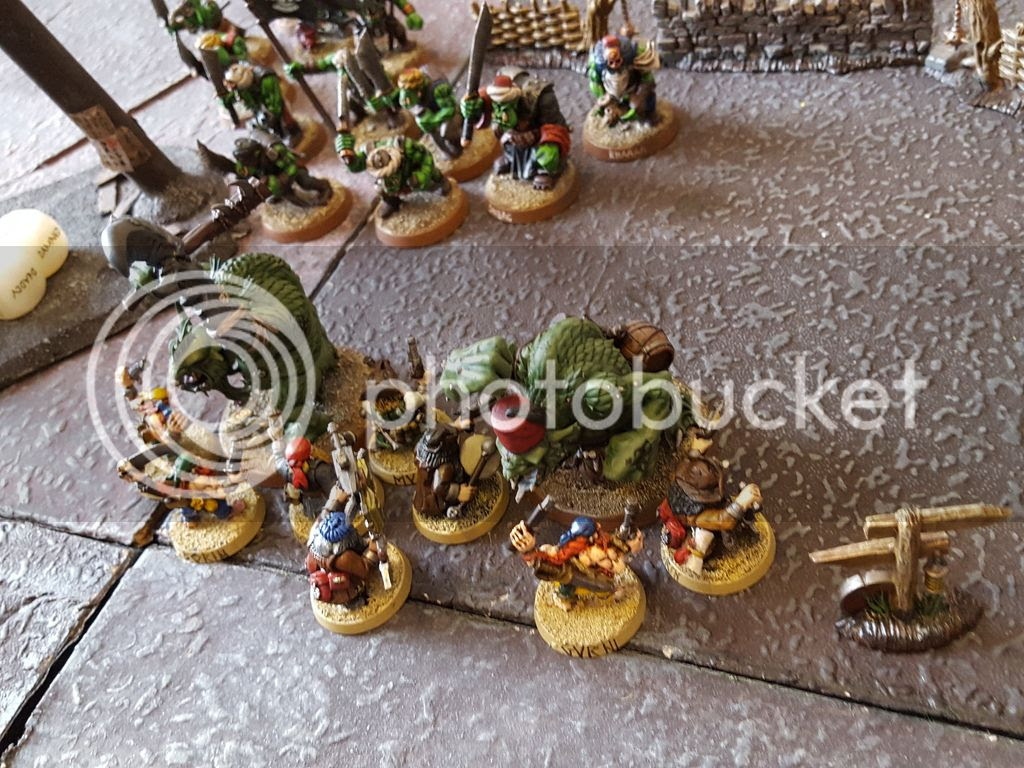 The Slayers crashed into the Trolls, just inside Chimera territory and took down one of the brutes. Sinbag roared and the Orruks joined in his guttural warcry. They counter-charged the Slayers and swept them away. 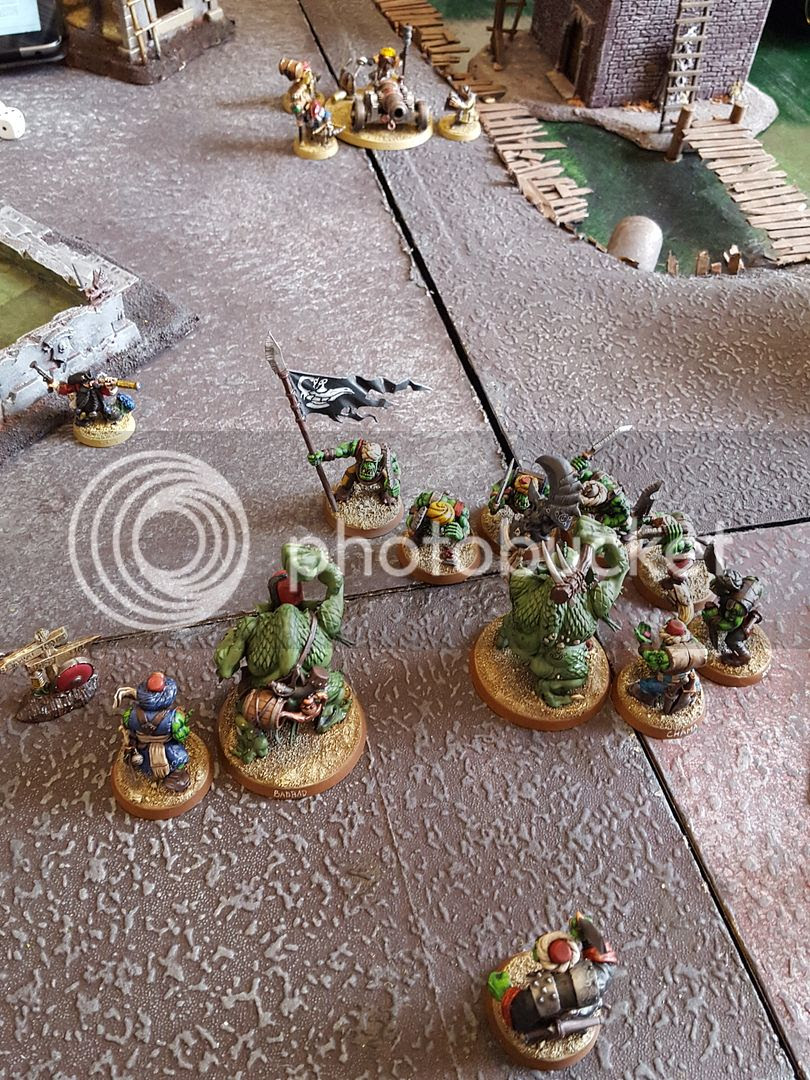 The cannon spoke again and all but annihilated the Orruks, keeping them out of Duardin territory and reducing the Orruk warband so that they could not hope to contest the ground. The Corsairs fell back from the battlefield knowing they could not win this day.

The Duardin earned 2 Laurels of Victory for having 5 or more models in enemy territory at the end of a round. The Orruks could have earned 3 Laurels the following round, but the cannon reduced their total numbers below the 5 model mark needed, so they only earned 1 Laurel from keeping the enemy out of their territory at the end of the next round.

2:1 - Major Victory to the Grudgebreakers.
Posted by WarbossKurgan (Saul) at 12:32